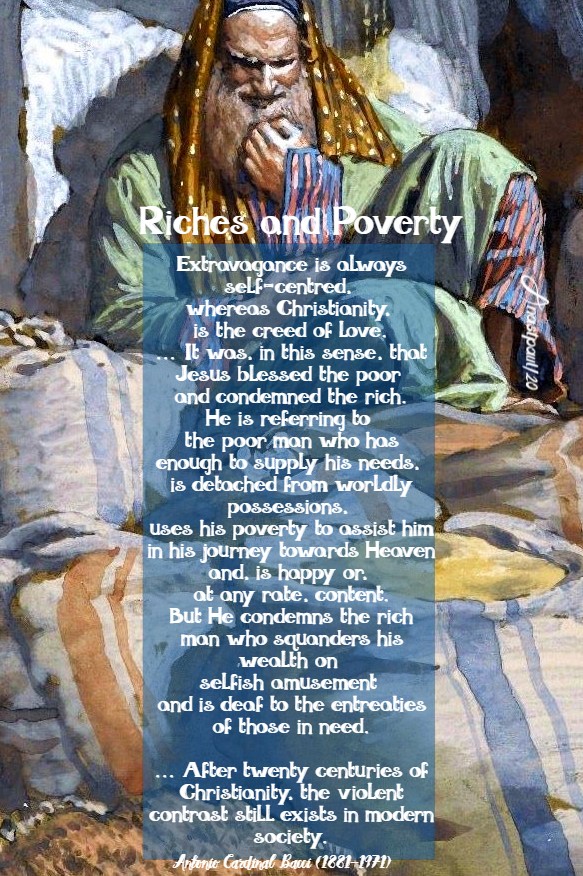 “There is a striking contrast between the luxurious living of wealthy people who waste their money on pleasure and amusement and the abject poverty of those who are without food, clothing and shelter.
This is in complete contradiction of the Gospel message which has proclaimed that we are all brothers.

Extravagance is always self-centred, whereas Christianity, is the creed of love.
Sumptuous living cannot be justified by an appeal to the right to own property, for, it is a shameless betrayal of the Gospel spirit of fraternl charity.
When St Thomas Aquinas is defending the right to private property, he adds at once:  “In regard to the use of it, however, a man should not regard material goods as belonging entirely to himself but … should be ready to share them with others in their necessity” (Summa Theologiae, II-II, 1 66, a 2).
If such maxims, which derive their inspiration from the Gospel, were put into practice, there would be neither excessive wealth, nor excessive poverty, in the world today.

It is true, that there would still be poverty but, destitution would disappear.

Poverty is good, in that it makes us detached from worldly things and helps us to think more about the next life.
But, destitution is really a social crime, for it is the result of human egoism and can breed hatred and spiritual degradation.

“Poverty,” writes Péguy, “is decent.   It does not dress in rags … It’s dwelling is tidy, healthy and affords a welcome. It can have a change of linen once a week.   It is not emaciated nor hungry…   It is not good for anyone to live in easy circumstances; on the contrary, it is much better always to feel the goad of necessity …” (La guerre et la paix, p 338).

It was, in this sense, that Jesus blessed the poor and condemned the rich.
He is referring to the poor man who has enough to supply his needs, is detached from worldly possessions, uses his poverty to assist him in his journey towards Heaven and, is happy or, at any rate, content.
But He condemns the rich man who squanders his wealth on selfish amusement and is deaf to the entreaties of those in need.

After twenty centuries of Christianity, the violent contrast still exists in modern society.
If we have any reason to reproach ourselves, let us try now, to make up for our deficiencies.

“Our labour here is brief
but the reward is eternal.
Do not be disturbed
by the clamour of the world,
which passes like a shadow.
Do not let false delights
of a deceptive world deceive you.” 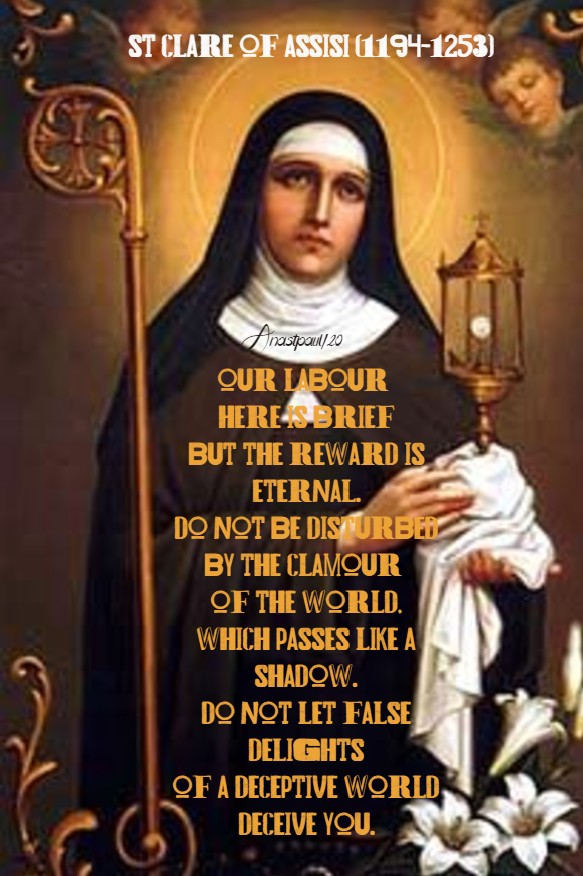 “Love God, serve God,
everything is in that.” 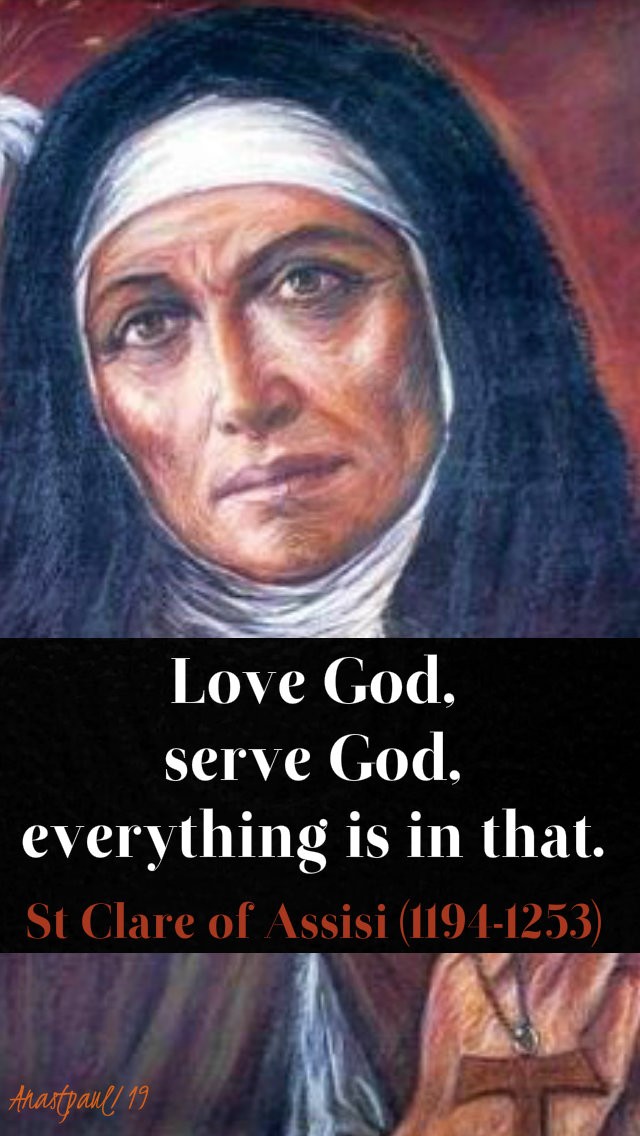 “Totally love Him,
who gave Himself totally,
for your love.” 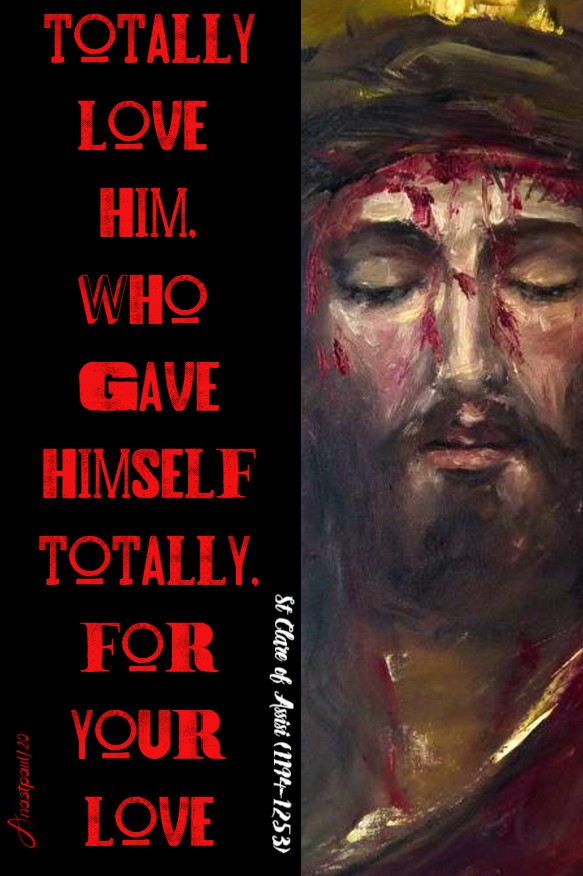 “Love that cannot suffer
is not worthy of that name.” 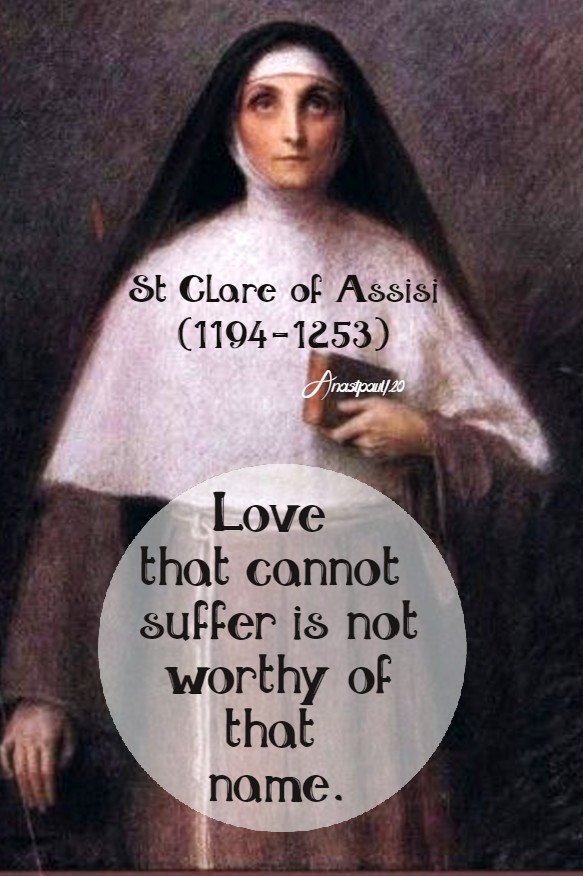 “Happy the soul to whom it is given
to attain this life with Christ …
For He is the Brightness of eternal glory,
the Splendour of eternal light,
the Mirror without spot.” 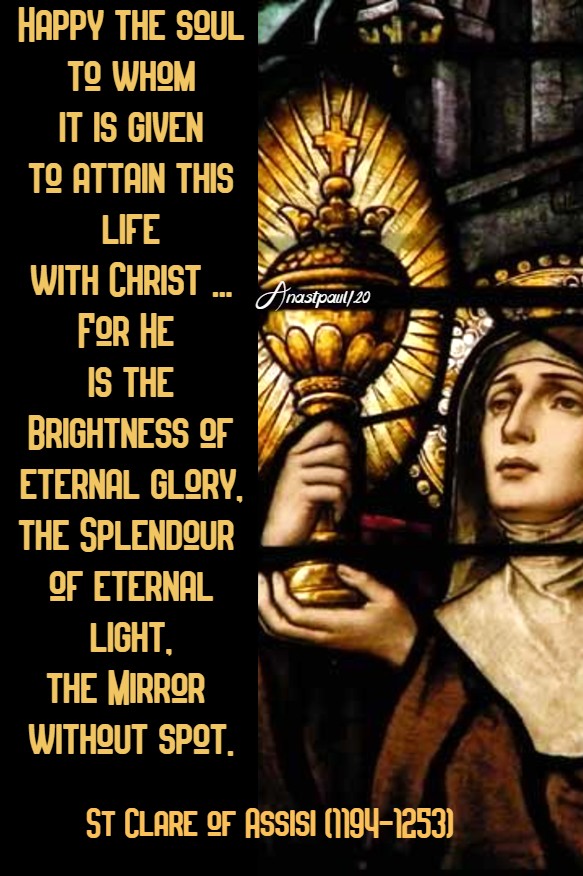 “O blessed poverty,
who bestows eternal riches
on those who love and embrace her!” 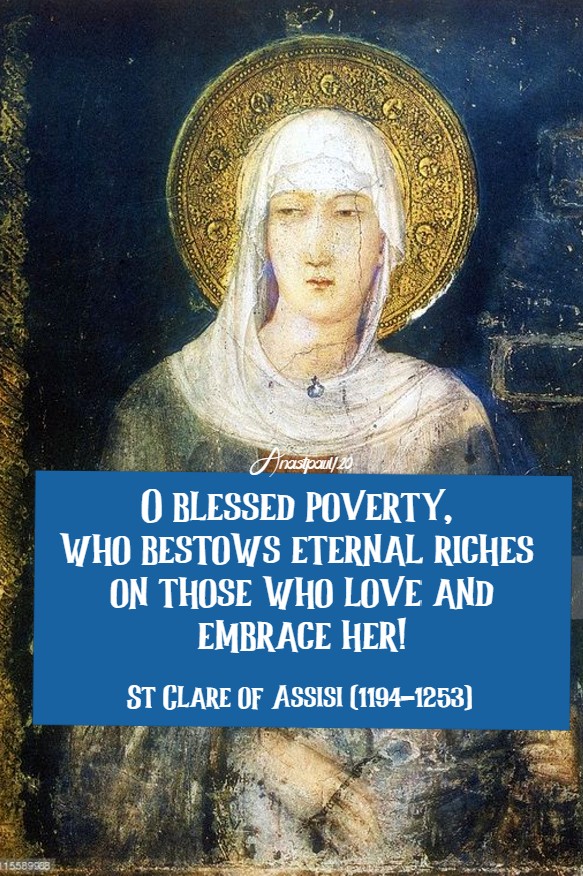 “Never forget that the way
which leads to heaven is narrow;
that the gate leading to life is narrow and low;
that there are but few who find it and enter by it
and, if there be some who go in
and tread the narrow path for some time,
there are but very few who persevere therein.” 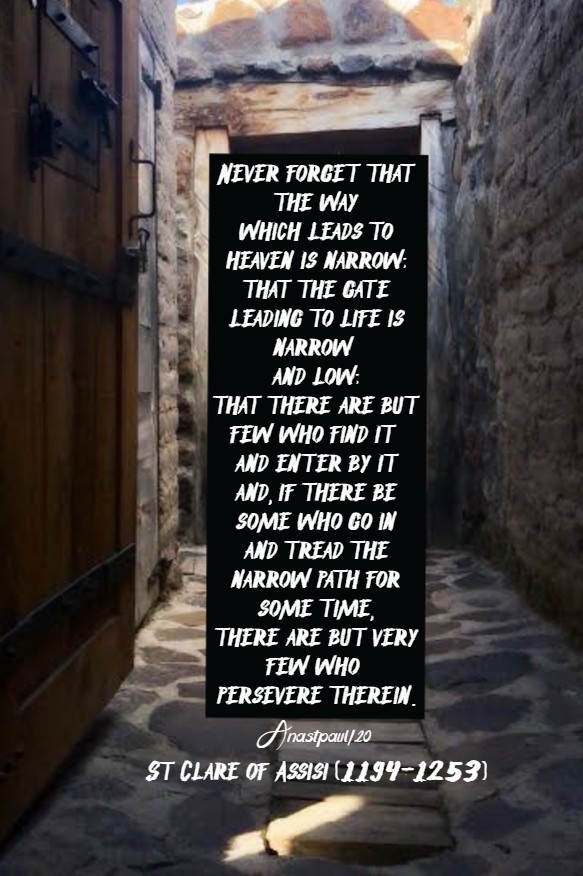 “Truly, I say to you, unless you turn and become like children, you will never enter the kingdom of heaven.”… Matthew 18:3

REFLECTION – “Beside this obvious explanation let another be given as well.
As an act of theological and ethical reflection, let us ask what sort of a child Jesus called to Himself and has set in the midst of the disciples.
Think of it this way – the child called by Jesus is the Holy Spirit, who humbled Himself.
He was called by the Saviour and set in the middle of the disciples of Jesus.   The Lord wants us, ignoring all the rest, to turn to the examples given by the Holy Spirit, so that we become like the children — that is, the disciples — who were themselves converted and made like the Holy Spirit.   God gave these children to the Saviour according to what we read in Isaiah:  “Behold, I and the children whom the Lord has given me.”
To enter the kingdom of heaven is not possible for the person who has not turned from worldly matters and become like those children who had the Holy Spirit.
Jesus called this Holy Spirit to Himself like a child, when He came down from His perfect completeness, to mankind and set it in the middle of the disciples.” … Origen Adamantius (c 185-253) Priest, Theologian, Father – Commentary on Matthew, 13 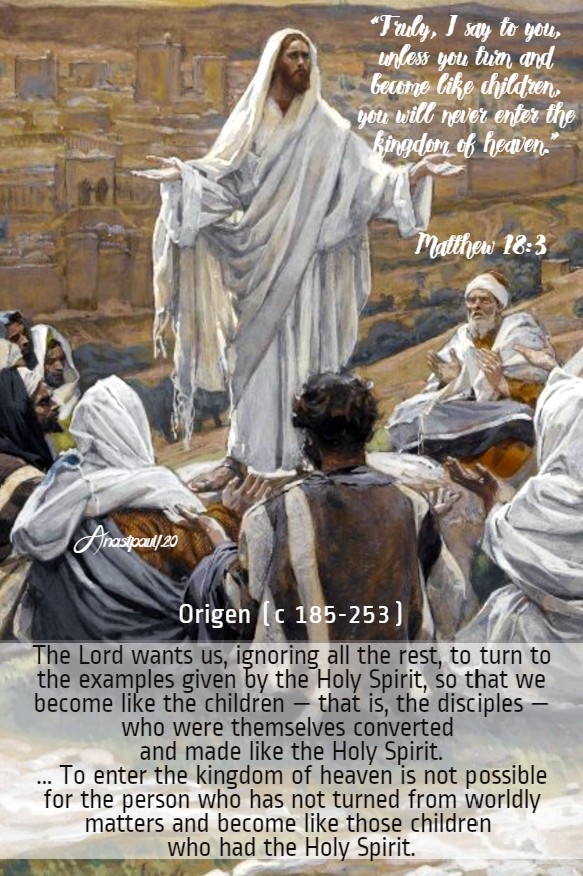 PRAYER – Holy God, grant we pray, Your Holy Spirit of love and divine grace to grow ever more in faith.   By our prayers and love for You and our neighbour, may we merit Your divine assistance.   Lord Jesus, help us to dwell often on the manner in which we are following You.   Let us strive each day to become more and more like You in all things and, to become beacons of Your Light, to all the world.   St Clare of Assisi, you who were a light to all, pray for us, amen. 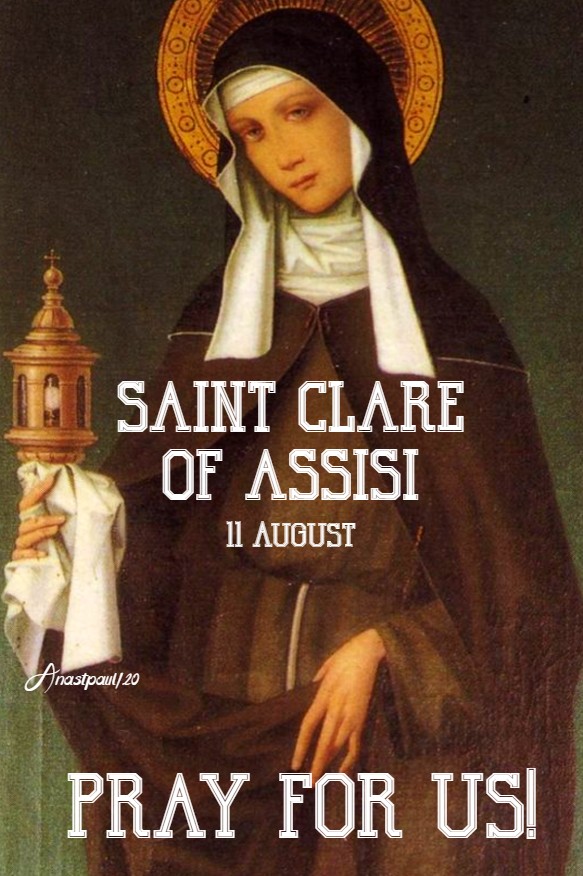 I come, O Lord,
unto Thy sanctuary
to see the life and food of my soul.
As I hope in Thee, O Lord,
inspire me with that confidence
which brings me to Thy holy mountain.
Permit me, Divine Jesus,
to come closer to Thee,
that my whole soul may do homage
to the greatness of Thy majesty,
that my heart,
with its tenderest affections,
may acknowledge Thy infinite love,
that my memory may dwell
on the admirable mysteries
here renewed everyday
and that the sacrifice,
of my whole being,
may accompany Thine.
Amen 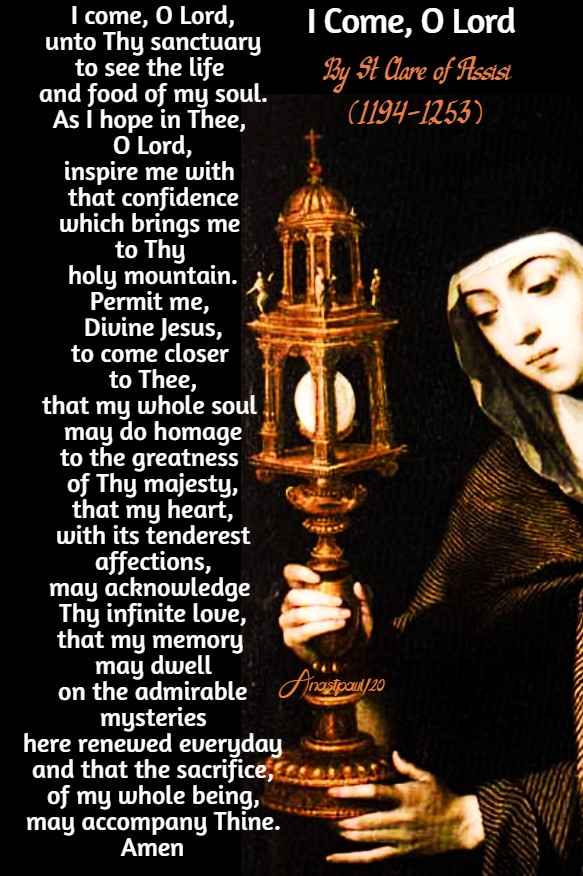 Saint of the Day – 11 August – St Géry of Cambrai (c 550 – 626) Bishop of Cambrai, Founder of Monateries, Churches and of St Géry Island off  Belgium, Géry devoted himself to the fight against paganism, Miracle-worker – born at Trier, Germany and died in 626 of natural cause in Cambrai, Belgium.   Also known as Gaugericus, Gaugerico, Gorik, Djèri, Gau.   Additional Memorials – 18 November for the exhumation of his relics and 24 September for the translation of his relics.   Patronages – prisoners, the healing of lepers and skin diseases, against diseases of cattle, consumption and deformities of the legs, Cambrai and the Archdiocese – in France, Brussels, Braine-le-Comte – in Belgium.   From his gift of delivering captives, there is attached, his power to deliver the victims of the demon and the influences of ill-intentioned people. He is also the Patron Saint of many Churches in the regions of Cambrai, Bierne, Valenciennes and Arras, as well as in Belgium. 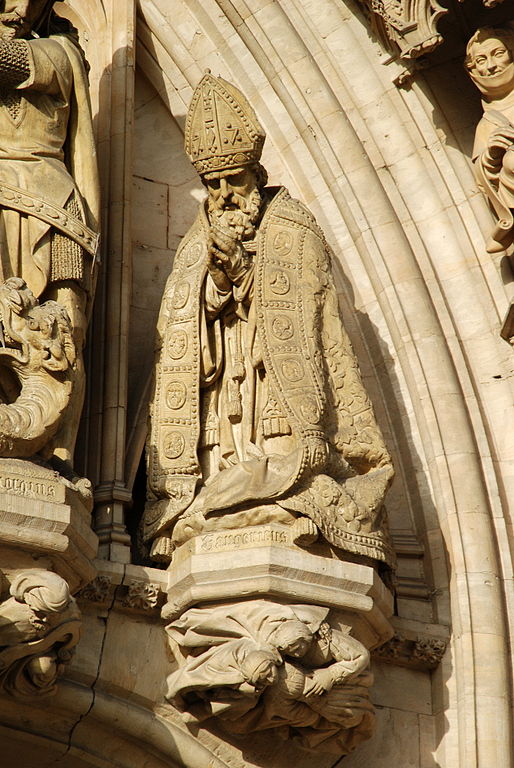 Tradition states that Bishop Magnerich, successor of Saint Nicetas as Bishop of Trie, was so impressed with the piety of the young man that he Ordained him as a Deacon but not before Géry had memorised the entire psalter.   Magnerich entrusted Géry with the pastoral care of the city of Cambrai.   Géry founded Churches and Abbeys, including a Monastery dedicated to St Medard, to host relics, which contributed powerfully to giving Cambrai both the appearance and functions of a city.

Around the year 580, Géry built a Chapel on the largest island in the Senne near Brussels.   Saint-Géry Island is named after him.

When the see of Cambrai-Arras fell vacant around 585, Géry was elected Bishop with the consent of Childebert II.   He was consecrated by Egidius, Bishop of Reims.   Bishop Géry devoted himself to fighting paganism, ransoming captives and visiting rural districts and villages. He paid his respects to King Chlothar II, the new lord of Cambrai after the death of Childebert.   Bishop Géry made a pilgrimage to the tomb of Saint Martin in Tours and assisted at the Council of Paris in 614. 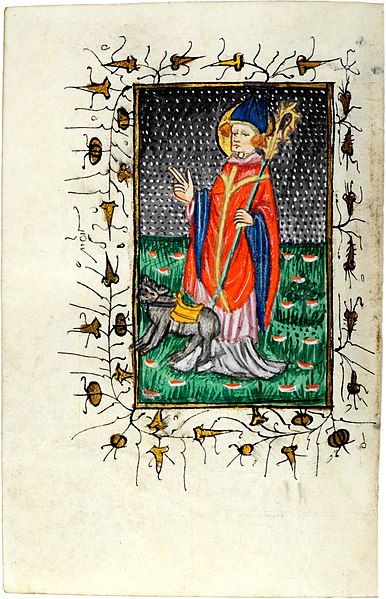 Géry also built a Church dedicated to Saint Martin, where he had relics of this Saint deposited.   The steeple of this church was to become, much later, the belfry of the city.   Having obtained pieces of the Holy Cross, Géry had a Church built to house them.   Finally, he had an Episcopal palace built near his Cathedral.   He transferred, between 584 and 590, the Episcopal see from Arras to Cambrai.   Géry erected a Chapel (in Saint Michel , later Saints-Michel-et-Gudule Cathedral), which soon became a Church and gave birth to the city of Brussels.

After serving as Bishop for thirty-nine years, he died on 11 August 626 and was buried in the Church of Saint Médard, which he had founded at Cambrai.   Veneration commenced immediately after his death.   His reliquary is still on display in the south transept of the Saint Géry church in Cambrai.

St Géry is credited with many miracles, the healing of a leper, of a blind man and, during his travels through his Diocese, he freed many prisoners, criminals, children taken into slavery.   It is said that he delivered his Diocese from a dragon.

When the Church of Saint Medard was demolished by the Emperor Charles V for the building of the citadel, the canons were removed and took with them, the relics of the Saint, to the old church of Saint Vedast, which from that time, has borne the name of Saint Gery.   The Church of Saint Géry is one of the oldest in Cambrai and a listed historical monument since 1919. 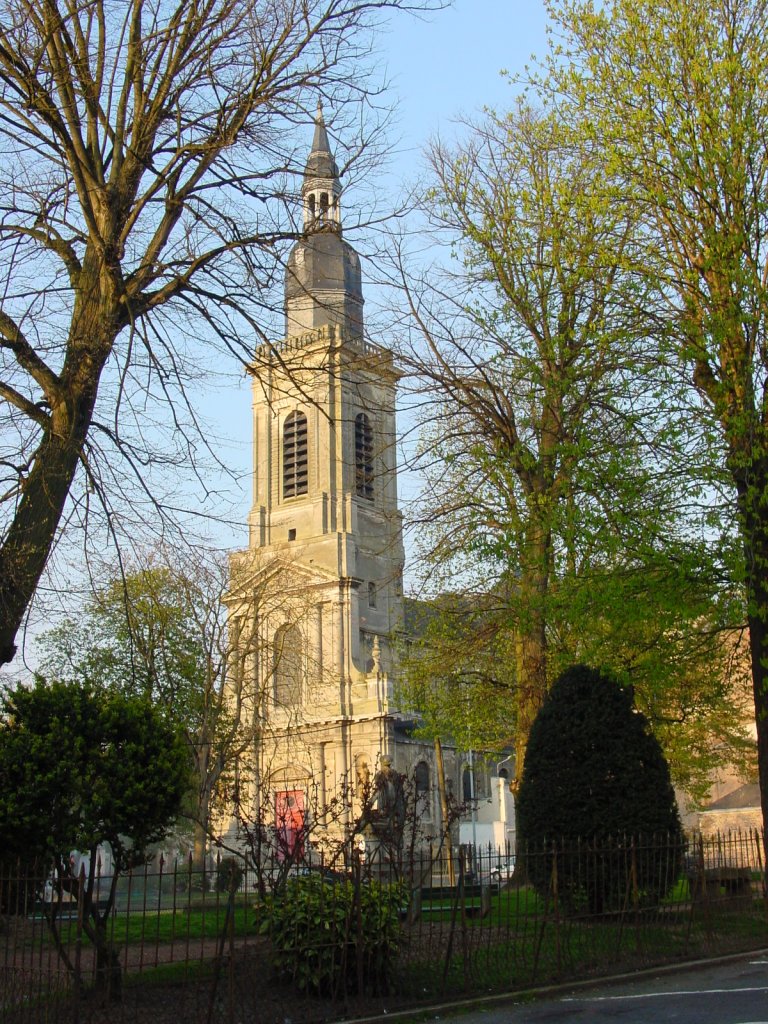 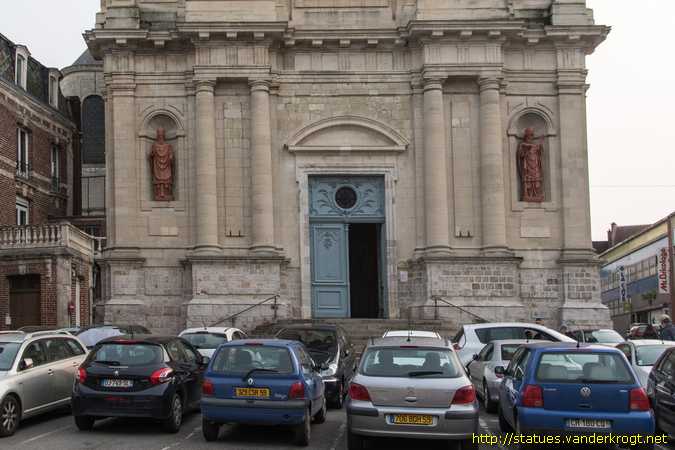 His feast day is mentioned in the Martyrology of Blessed Rabanus Maurus for today, 11 August.