O Lord,
let me not henceforth desire health or life,
except to spend them for You
and with You.
You alone know what is good for me,
do, therefore, what seems best.
Give to me or take from me,
conform my will to Yours
and grant that,
with humble and perfect submission
and in holy confidence,
I may receive the orders
of Your eternal providence
and may equally adore,
all that comes to me from You,
through Jesus Christ our Lord.
Amen

Saint of the Day – 17 August – St Nicolò Politi (1117-1167) Basilian Monk and Hermit, He was known for his miracles even during his childhood and was Venerated as a saint even before his death.   Born on 6 September in 1117 in Adranò, Catania, Sicily, Italy and died at dawn on 17 August 1167 in Arcaria, Sicily, Italy.   Patronages – Adrano, Alcara li Fusi, Sicily, Italy.

In Adranò, in the 12th Century, lived the noble and historic family of the Politi, represented mainly by Almidoro and his wife Alpina.   This couple, living a pure and Christian faith, was very wealthy and yearned for a child to inherit their many riches.   Almidoro and Alpina incessantly prayed to the Lord to grant them the grace of having a child.   As the story is told, following a devout tradition that on 1 December 1116, the Politi couple travelled to Alcara in order to help with the huge festivities which followed for the celebration in honour of Saint Nicola Vescovo, Bishop.   Many foreigners came to the festival to honour of his many miracles.   With love and deep devotion, Almidoro and Alpina prayed to Saint Nicola Vescovo for the Lord to grant them the grace of having a child, promising that they would name him Nicola.   After nine months, on 6 September 1117, the Politi Palace was blessed with the joy of a new baby boy whom they, as promised, named Nicola.   The historians narrate that the water of the first tear that he cried, miraculously forged a fountain of fresh spring water.   They also write that from the tender age fof three days to one week old, he refused to eat.

As he grew older, he revealed the goodness of his mind, the purity of his soul, his charity for the poor and the sufferers, his mercy, vivid intelligence and his love of study.   His teacher, Fr Andrea, was amazed by his intelligence and by the way that Nicola learned several disciplines, particularly the languages Greek and Latin and the works of the Byzantine Fathers.

At the age of 17, Nicola was already a sturdy, prudent young person, admired by all for its exemplary gifts, his works of beneficence and his devotional life.   In the year 1134, his proud parents, decided he should marry.   Nicola, as soon as he heard the news, opposed their decision and refused his parents’ wishes.   Even though he was a very devoted son, he told them he planned only to serve the Lord with purity of spirit and body for the remainder of his life.   Hoping that Nicola would change his mind, his parents found a beautiful, rich and noble young woman.   They spoke to her family and arranged the wedding.   But Nicola, the night before the wedding, escaped from his parents’ home and settled on a life of solitude, sheltered in a cave on the outskirts of the city of Etna, in Sicily. 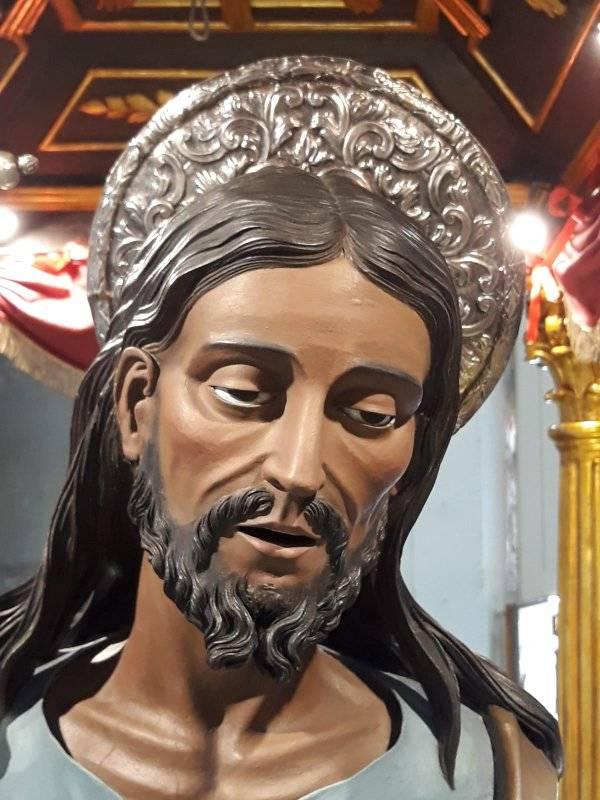 Three years later, in 1137, Almidoro was coming close to finding his son.   Nicola, receiving a warning from the Heavens and with the guide of an Eagle, left Etna and headed towards Alcara.   In the evening, he reached Maniace and stayed overnight in the Monastery of the Bassilian Monks where he met young Lorenzo from Frazzanò.   The next morning, he went to confession, attended the Mass and afterwards, together with Lorenzo, set out again on foot.   At the top of the mountain of Moele, the two young men separated – Lorenzo continued towards Frazzanò and Nicola followed the Eagle that would guide him to his new home.

Reaching the western areas of Monte Calanna, tired and thirsty, he implored the Heavens for divine intervention.   He poked a cross-shaped stick at a pebble and a gush a fresh water sprang forth, which still exists today and is named “Aqua Santa.”   A little later that day, the Eagle landed on top of a grotto where Nicola would then live.   The day after, according to Lorenzo, Nicola came upon the Monastery of the Rogato, where he knew Father Cusmano d’ Alcara, the most scholarly clergyman, theologian and holyman.   He became Nicola’s spiritual father and the Monastery the place in which, for thirty years, he would go to Mass every Saturday at the Vigil he would confess and receive Holy Communion from him.

In his grotto, Nicola lived in prayer, meditation and penance, feeding himself off the grass and the bread that every day the protective Eagle carried to him.   In 1162 at the Monastery, he found his friend Lorenzo, now a member of the Convent of Fragalà.   He wanted to accompany Nicola to his grotto where he was astonished at the serious state of poverty in which Nicola lived.   That day the Eagle carried an entire loaf of bread and not the usual half.   In the morning Lorenzo left for the Monastery.   On the 14 August 1167 Nicola, received another warning from the heavens and learned that in 3 days he would die.

The next morning, Feast of Assumption, he went to the Monastery where he confided with joy, to Fr Cusmano, that on the 17th he would render his spirit to God.   After Holy Mass he said his farewells to the Monks and returned to the grotto.   Before arriving, he stopped beside the road, tired and thirsty.   Two women with baskets full of fruit passed by.   Nicola asked the women, in the name of God, for the charity of one fruit.   The first one refused and made fun of him and her fruit turned rotten and full of worms.   The second one kindly offered the fruit and her basket was filled with roses and calla lilies.

Finally reaching the grotto, exhausted, Nicola prepared for his death with fervent prayers to the Lord and with supplication to the Virgin Mary, the Angels and the Saints.   On Thursday, 17 August 1167, the pure and Holy Spirit of Nicola left his body and ascended to Heaven.   At the moment of his blessed passing, the bells of Alcara and the Monastery, began to ring festively for about an hour, without the aid of any human hand.    The clergy, the town’s governors and the people ran into church but nobody could offer an explanation of the blessed event.   A message arrived that Fr Cusmano had died but instead, Fr Cusmano realised Nicola had died.   He, of course, did not know where the grotto was in which Nicola lived.   Many in Alcara and at the Monastery began a novena of prayer to the Virgin Mary, the protector of the town, asking for confirmation of the death of the Saint and therefore, the miraculous ringing of the bells.

At the end of the novena, Saturday, 26 August, the bells began ringing again on their own, just as Leone Rancuglia reached Alcara and reportsed to the clergy and the people re-united in church, of having recovered, in a grotto, the body of a hermit and to have touched it with a stick which left his arm paralysed.   The clergy, the magistrates and the people left immediately and met up with the nuns of Rogato at the Canale.   Together, going to the grotto, Rancuglia pointed to the body of the Saint and his affected arm returned to normal functioning.   The Body, still kneeling, with the cross and the book opened on his hands, was carried outside and placed in open arch.   Then Fr Cusmano stood on a rock and was inspired to narrate the story of the blessed life of St Nicola, to whom for thirty years he had been a confidante and spiritual father.   While numerous miracles happened –  the crippled walked normally and the people that were blind, deaf and the dumb received their sight, their hearing and their senses.

The people shouted:  “Our Patron lives!  Nicolò Politi!”  The townspeople gathered to take him to Alcara but as they arrived near the bearers had to stop to rest.

Amazed at what was happening, the clergy and the faithful asked for God’s help.   That is when a baby wrapped in cloth, son of the woman who had offered the fruit to Nicola, sat up in his mother’s arms and yelled in a strong and clear voice:   “To the Rogato!! To the Rogato!!” Fr Cusmano cried out to all in the commotion, that he had promised Nicola, during his last visit, that alive or dead he would be returned to the Rogato.   The Bier became light again and he was brought to the Monastery and placed to rest in the Monastary Church of Rogato.   His remains are now behind gates in the main church, Chiesa Madre, in Alcara Li Fusi.   Below is his Shrine and relics. 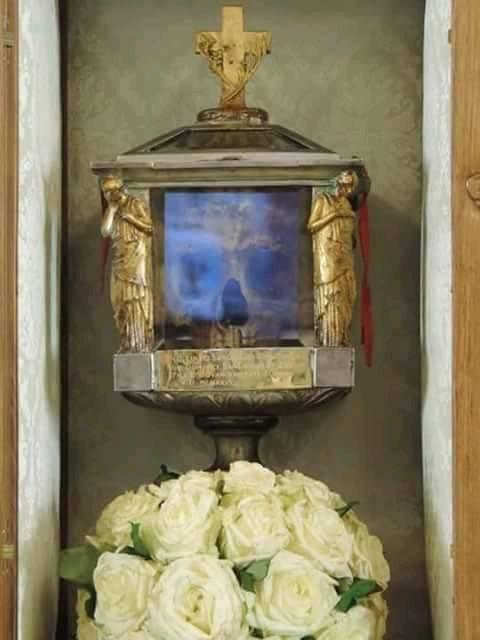 Miracles Do Still Happen! Believe it not!

On Thursday 28 May 2009 all of Alcara li Fusi, Sicily, Italy was abuzz with spectacular news of an event involving San Nicolo`Politi. Television camera crews from all over descended on the town with long lines of followers walking to the L’Aqua Santa location carrying jugs and bottles to fill with Holy water.

A group of school children, on a field trip with their teacher, witnessed the miracle of a statue of St Nicolò opening and closing his eyes.   One child recorded the event on his cell phone.   They excitedly started screaming and the teacher fainted.   Afterward they all began to cry and pray.

As of yet, it has not recurred again nor has it been verified by the Catholic Church, although they are in the process of investigating the event.   This is the biggest news to hit our town in centuries! The video, news reports and articles are all over the Internet.   Do a search on Google, YouTube, etc. using the search words:

St Nicolò was born in the town of Adrano but chose to live his life in Alcara.   He spent the last 30 years of his life there.   We should all feel blessed knowing that we were either born there or are direct descendants of people that were and that is where San Nicolò now rests in peace.

His message is loud and clear – Open Your Eyes! 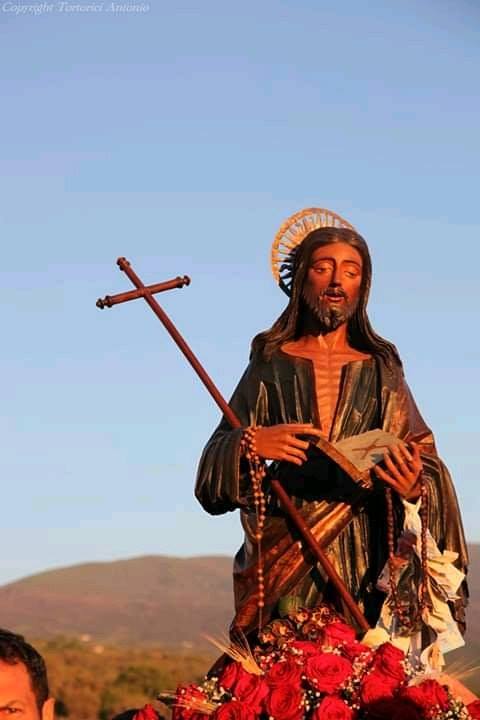 The video below is of St Nicolò visit to his home town of Adrano after 880 years.