St Clement was born in Tasswitz, Austria, on December 26, 1751 — the eve of the feast of the Apostle who Jesus loved — he was christened John.   But he would become known to the Catholic world by the names he would adopt in religious life, Clement Maria Hofbauer.

He was only six when his Bohemian-born father passed away.   On this tragic occasion, his mother stood him before a crucifix and said:  “Henceforth; He is your father. Take care that you never grieve Him by sin.”   The words etched so deeply upon his heart that he never forgot them — and ever lived by them.

Often, the boy would gather the household together to recite the Rosary, his favourite devotion, would fast until nightfall on Saturdays, in honour of the Blessed Virgin and would distribute to the poor food and money of which he deprived himself.   Not surprisingly, Hofbauer had yearned from his boyhood to enter the priesthood.   “Priests,” he said, “are the light of the world and the salt of the earth.”   But fulfilment of this, his singular earthly ambition, so long evaded him that it would seem he must have abandoned all hope of realising it.   Instead, he twice withdrew himself from the world to adopt the contemplative life of a hermit.  Yet, circumstances frustrated even these aspirations and at length he settled into the life of a baker.

If our heavenly Father will not reach a stone to one who asks for bread, could He deny the holy yearnings of so pious a soul?   Indeed, he would not leave this saint of predestination a common baker confecting common bread for common food but would call him to confect Bread of Life upon the Altar of God.

Three wealthy sisters who attended Mass at St Stephen’s Cathedral in Vienna, where Hofbauer daily served as an altar boy, were caught in a torrential downpour at the cathedral one Sunday.   When Clement fetched a carriage for them, the ladies urged him to ride with them out of the drenching rain.   Long having observed his pious comportment in the sanctuary, the women inquired why their carriage guest, now thirty years old, had not entered the priesthood.   “That has been my most ardent desire since childhood,” Hofbauer admitted, “but I am obliged to forego it, because I lack the means to carry it out.”   At this the eldest sister announced:  “If that is the only obstacle, we will gladly see that you reach your goal.”   Thanks to the ladies’ generosity, an ecstatic saint was soon enrolled for seminary training at the University of Vienna.

As Clement Hofbauer began his pursuit of Holy Orders, Protestantism was in its third century of open defiance of the Church.   The poison of Freemasonry had been seeping into the body of Europe for more than six decades.   Where Catholicism had survived the ravages of the “Reformation,” many of its faithful were now weakened in spirit by Masonic “free thinking.”   In many if not most portions of the continent, Catholics — including priests and even bishops — had grown tepid and indifferent in their faith.   In this state, the wellsprings of grace seemed to dry up, and pitiful ignorance of even the most fundamental Truths of the Faith became pandemic.   As a consequence, even regions still nominally Catholic were infected with scepticism toward the Apostolic authority of Rome and were easily drawn to the false doctrine of the divine right of kings which had been resurrected by Luther.   Thus, emboldened monarchs intruded into ecclesiastical affairs with increasing brazenness.

Out of pure devotion, Saint Clement had undertaken several pilgrimages to Rome on foot in the years prior to entering the seminary.   Now he made it an annual exercise, to escape the repulsive air of unorthodoxy at the university and the religious repression of the imperial state  and to refresh himself spiritually in the capitol of Christendom.   He was joined on these arduous journeys by a fellow seminarian of kindred spirit, Thaddeus Huebl, ten years the saint’s junior.   By the fall of 1784, conditions in Vienna had become so intolerable that Hofbauer could not bring himself to return to the University.   He decided instead to complete his studies in the Eternal City.   The plan came to him with such suddenness and resoluteness that he implored Huebl to leave a hospital bed to join him.   Because of his stricken condition, Huebl at first rejected the idea.   But the saint would not be put off.   He insisted that Huebl join him, promising that God would take care of his friend’s health.   At this, Huebl consented — and his health was restored so rapidly as to seem miraculous.

It was a common practice for the two pilgrims to sleep in fields, drawing a circle about their earthen beds and invoking their guardian angels to protect them within it.   In the mornings, they would attend Mass at the first church whose bells they heard. Having retired one evening in the neighbourhood of Santa Maria Maggiore, they were awakened in the very early morning by the soft pealing of a bell from the little church of San Giuliano.   Upon their arrival, they realised it was a convent church but of a religious order they did not recognise.   Impressed by the recollection of the Religious in their meditation, Hofbauer asked an altar boy what kind of priests these were.   “They are Redemptorists,” the boy returned, adding, “and some day you, too, will be one of them.”   Convinced that the astonishing oracle was a message from God, Saint Clement and his friend presented themselves to the Superior of the Convent and, with a burst of inspiration which left Huebl’s head spinning, found themselves enrolled as Redemptorists.

Monsignor Alphonsus Maria de Liguori, the Neapolitan Bishop of Agatha and the Founder of the Redemptorists, was not unknown to Clement Hofbauer.   The latter saint in recent years had become an enthusiastic reader of the former’s voluminous spiritual writings — works that would eventually merit Saint Alphonsus canonical recognition as one of the 32 Doctors of the Church.   But the Congregation of the Most Holy Redeemer, founded by Liguori in 1732, was scarcely known outside of Naples and not at all beyond the borders of Italy.    Monsignor Liguori received with great joy the news that the first two non-Italians had entered his order in 1784.   Isolated from them as he was, however, his keen interest in them as the hope of spreading the Congregation into the German kingdoms had to be taken from afar.   Saint Alphonsus and Saint Clement would never meet in this life.

With a sense of urgency to carry on Liguori’s work and to cultivate new vocations in the German kingdoms to the north, the Superior General at San Guiliano shortened Hofbauer’s and Huebl’s novitiate.   In March of 1785, ten days after they took their vows as professed Religious, they received the Sacrament of Holy Orders.   Several months later, they were dispatched back across the Alps to establish the Congregation in the northern lands.

His first mission was to Warsaw, where he was in charge of the German church and he soon enjoyed a certain repute as a confessor and the instigator of good works to remedy the social evils of the day.   Thus he founded an orphanage, a poor school and a secondary school.   In 1808 the invading French cast him into prison, whence, after four weeks, he was able to go to Vienna.   Here he became the inspiration and religious leader of a group of German romantics—von Muller, Schlegel, Werner and others—and exerted tremendous influence not only among the poor but also and despite his rather scanty education, with officials, statesmen and scholars.   In this way he was able to defeat the project for a German national church at the Congress of Vienna and eventually succeeded in arranging for the legal establishment of the Redemptorists north of the Alps, though he did not live to see this occur, since he died in 1820.

As a consequence he is regarded by the Redemptorists as their second founder.   He was a man of great energy and drive, seeing clearly the end in view and always indefatigable in his work for souls, in the confessional especially, and among the poor.

St Clement’s is a story that continues with the Venerable Joseph Passerat who, as the succeeding Vicar General, brought to fulfilment the prophecies of Saint Alphonsus and Saint Clement about the Congregation, leading to an inspiring re flowering of the One True Faith in much of Europe.   It is a story that carries over, a century later, into the reign of Pope Saint Pius X who, after canonising Clement Hofbauer, valiantly defended the Faith against the very same forces of darkness posturing as Enlightenment.

But the Church’s victory has already been foretold.   By Jesus Christ, Who promises the gates of hell shall not prevail against it.   And by the Virgin Mary who, at Fatima, assured us: “In the end, my Immaculate Heart shall triumph.” 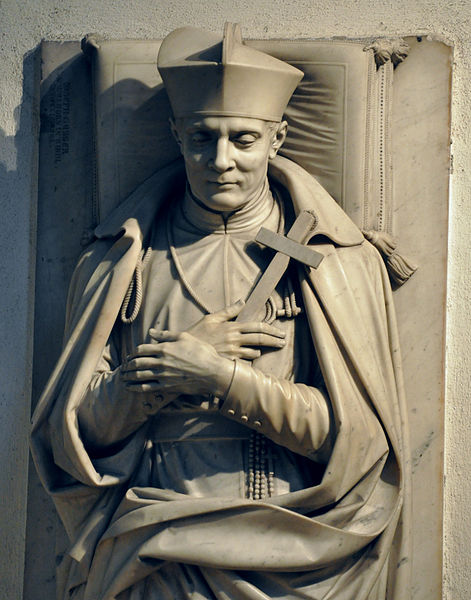