“But whoever blasphemes against the holy Spirit will never have forgiveness but is guilty of an everlasting sin.”…Mark 3:29

REFLECTION – “Why is blasphemy against the Holy Spirit unforgivable?   How should this blasphemy be understood?   St Thomas Aquinas replies that it is a question of a sin that is “unforgivable by its very nature, insofar as it excludes the elements through which the forgiveness of sin takes place.”   According to such an exegesis, “blasphemy” does not properly consist in offending against the Holy Spirit in words;  it consists rather in the refusal to accept the salvation which God offers us through the Holy Spirit, working through the power of the Cross.   If man rejects the “convincing concerning sin” which comes from the Holy Spirit (Jn 16:8) and which has the power to save, he also rejects the “coming” of the Counsellor (Jn 16:7) – that “coming” which was accomplished in the Paschal Mystery, in union with the redemptive power of Christ’s Blood:  the Blood which “purifies the conscience from dead works” (Heb 9:15).

We know that the result of such a purification is the forgiveness of sins.   Therefore, whoever rejects the Spirit and the Blood (cf. 1Jn 5:8) remains in “dead works,” in sin.  And the blasphemy against the Holy Spirit consists precisely in the radical refusal to accept this forgiveness, of which he is the intimate giver and which presupposes the genuine conversion which he brings about in the conscience.   If Jesus says that blasphemy against the Holy Spirit cannot be forgiven either in this life or in the next, it is because this “non-forgiveness” is linked, as to its cause, to “non-repentance,” in other words to the radical refusal to be converted…

Blasphemy against the Holy Spirit, then, is the sin committed by the person, who claims to have a “right” to persist in evil – in any sin at all – and who thus, rejects Redemption. One closes oneself up in sin, thus making impossible one’s conversion and consequently the remission of sins, which one considers not essential or not important for one’s life. This is a state of spiritual ruin, because blasphemy against the Holy Spirit does not allow one to escape from one’s self-imposed imprisonment.”… St John Paul II (1920-2005) Encyclical “Dominum et vivificantem” 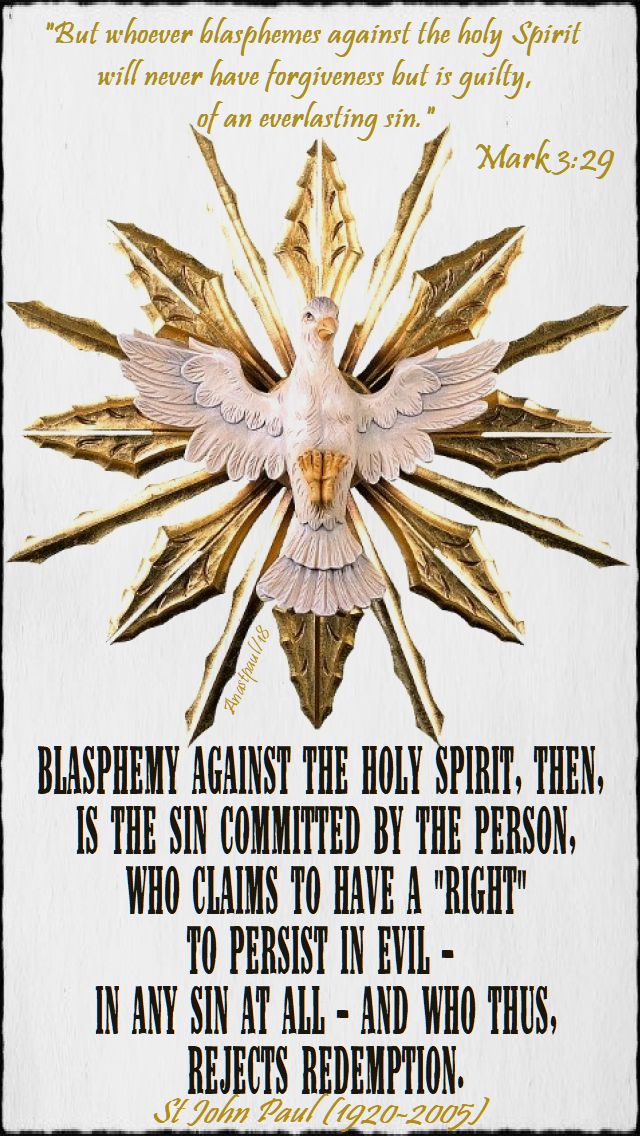 PRAYER – Lord God strength of those who hope in You, support us in our prayer because we are weak and can do nothing without You.   Grant always the help of Your grace so that, in fulfilling Your commandments, we may please You in the depths of our hearts and souls and be free of sin against You.   Fill us with the Holy Spirit, who is our refuge, our strength, our truth.   Through Christ, our Lord, with You and the Holy Spirit, one God forever, amen.   “Whoever does the will of God is my brother, and sister, and mother.” Mark 3:35 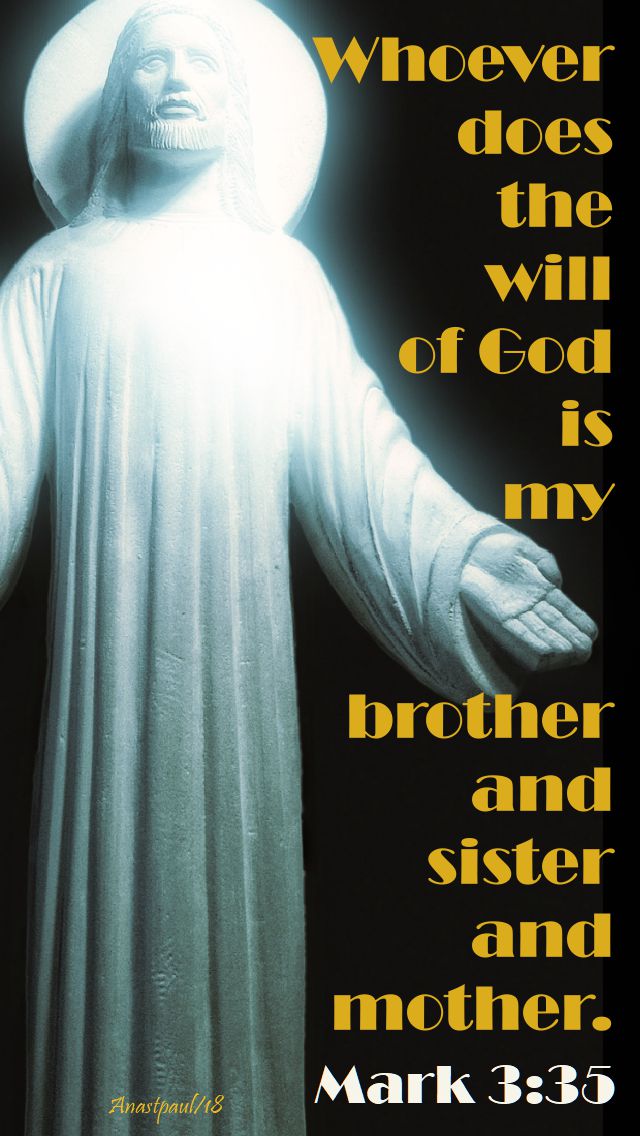