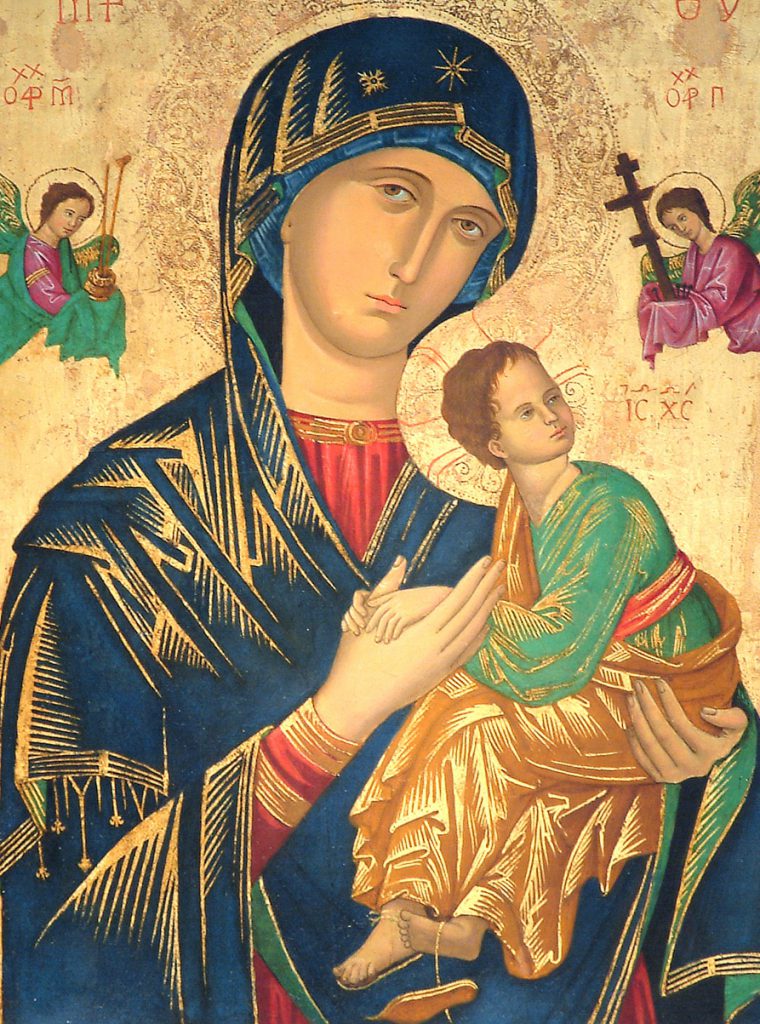 An artist about to paint an icon prepares himself spiritually by prayer, confession, Holy Communion and sometimes fasting.   He prays even while painting, for he sees himself as an instrument of the Holy Spirit, the principal artist, Who will use the icon as an instrument to channel graces to those who reverence it and pray before it.   In most cases, the artist does not even sign his name to his work.

In Western art, there is little difference in the styles used in sacred art as compared to secular art;  only the subject matter is different.   Icons, however, are not meant to be realistic as far as physical representation, but rather to portray eternal truths in a way that immediately transports the viewer to a spiritual plane.   Perhaps the simplest way to describe it is as theology in line and colour.   The images are rendered in an extremely stylised, non-naturalistic way.   The folds of garments appear as simple geometric forms, while faces and bodies show portray human nature transformed by grace into the divine.

In the icon of Our Mother of Perpetual Help, the Child Jesus is not portrayed with the physical proportions of an infant but appears almost as an adult in miniature form.   This has been interpreted to indicate that He is God, having infinite knowledge.   Yet He is human as well, for He clings to His Mother’s hand in fear, while gazing up toward the angel over His shoulder.   One of His sandals has come loose, indicating the haste with which He had run to her.

Why is the Child Jesus so frightened?   The angels in the picture are holding instruments of His Passion and death, with the angel on the left bearing the gall, the lance and the reed, while the angel on the right holds the cross and nails.   Their hands are covered with a cloth or veil, much like the humeral veil that the priest holds when blessing with the Blessed Sacrament in the monstrance at Benediction.

The face of Our Lady is grave and sorrowful, with her large eyes directed not at Jesus, but at us.   One feels that she is pleading with us to avoid sin, which has caused her Son to suffer so much for us.   Her gaze makes us a part of the picture and the pain it portrays.   “Will you not love my Son, Who has loved you so much?” she seems to say.

Our Lady is clothed in the colours of royalty; her tunic is of dark red and her mantle is dark blue with a green lining.   (According to another interpretation, the dark red is said to be the colour worn by virgins at the time of Christ, while blue was the colour worn by mothers in Palestine.)   The Child Jesus also wears the colours of royalty.   Both Jesus and Mary have golden halos, but Christ’s halo is decorated with a cross as a sign of His Divinity and Passion.   Jewelled crowns were placed on the heads of both Mother and Child of the original icon by order of the Vatican in 1867.   (The crowns were removed when the icon underwent restoration in the 1990’s.)

The Greek initials next to the head of Our Lady identify her as “Mother of God,” while those next to the Child are the abbreviation for “Jesus Christ.”   The letters over the angels’ heads indicate the one on the left as St Michael and the one on the right as S. Gabriel.

The 8-pointed star on Our Lady’s veil tells us that she is the Star of the Sea, the Star that leads us to Jesus.   The small ornate cross to the left of the star reinforces this concept.

Mary’s mouth is small to indicate her spirit of silence and prayer.   Her eyes are large, for they see all of our troubles and needs and are always turned toward us.

Christ’s hands, turned palms down into His Mother’s, indicate that He has placed the graces of the Redemption in her keeping.   Our Lady’s hand does not clasp those of her Son but remains open, inviting us to put our hands in hers along with those of Jesus.

As in other icons, the background of the painting is gold to symbolize Heaven, where Jesus and Mary now reign in glory.   This light of Heaven shines through their clothing, illuminating not only the picture itself but those who behold it.   This radiance speaks to us of God’s light and grace, strengthening and consoling us as we journey through life to our heavenly goal.

Finally, it is of no small significance that Our Blessed Mother herself referred to the icon by the title of “Holy Mary of Perpetual Succour.”   Surely this, along with the symbolism we see in the picture, should assure us of the loving concern and tenderness our Blessed Mother has for us and her ardent desire to be a source of perpetual help to all who call upon her.

In answer to Pope Pius IX’s injunction to “make her known,” the Redemptorists commissioned several artists to paint copies of the original icon.   More than 2,300 such copies, similarly touched to the original, have been sent to other houses of the order around the world.   Pope Pius IX also received a copy, which he enshrined in his private chapel and was often seen kneeling before it in prayer.   (Excerpt from Sister Mary Agatha, CMRI)
Part of the tradition is that Mary had made it clear that she wished her image to be situated between the great basilicas of St John Lateran (the Pope’s Cathedral) and St Mary Major, her own basilica.   For the best part of 300 years from the year 1500, it was famous for the many miracles and graces granted to those who made the pilgrimage to the church of St Matthew on the Via Merulana, which was destroyed during the Napoleonic war.

In January 1855, the Redemptorist priests purchased Villa Caserta in Rome along the Via Merulana and converted it into their headquarters.   Without realising it, the property they had purchased was once the church and monastery of Saint Matthew, the site which the Virgin reportedly chose as the icon’s shrine.

Mother of Perpetual Succour, Pray for us!

O Mother of Perpetual Succour,
with grateful hearts we join you
in thanking God
for all the wonderful things
He has done for us,
especially for giving us,
Jesus, your Son, as our Redeemer.
O God, our Creator,
we thank You for the gift of life
and all the gifts of nature:
our senses and faculties,
our talents and abilities.
We thank You for creating us
in Your image and likeness
and for giving us this earth
to use and develop,
to respect and cherish.
Despite our failures,
you continue to show Your love for us today
by increasing the life of Your Spirit in us
at the Eucharistic table.
Finally, we thank You, loving Father,
for giving us Mary,
the Mother of Your Son,
to be our Mother of Perpetual Succour.
We are grateful for all the favours
we have received through her intercession.
We pray that those past favours
may inspire us to greater confidence,
in your loving mercy and to seek the aid
of our Mother of Perpetual Succour.
Amen