One of the largest crowds ever assembled for a canonisation—250,000—symbolised the reaction of millions touched by the simple story of Maria Goretti.   She was the daughter of a poor Italian tenant farmer, had no chance to go to school, never learned to read or write.   When Maria made her First Communion not long before her death at age 12, she was one of the taller and somewhat backward members of the class.

God’s will was holiness, decency, respect for one’s body, absolute obedience, total trust.  In a complex world, her faith was simple:  it is a privilege to be loved by God and to love Him—at any cost  . Oh, that we too may always remember this!

St Maria Goretti, pray for us!

“The Holy Eucharist
is the perfect expression
of the love of Jesus Christ for man.” 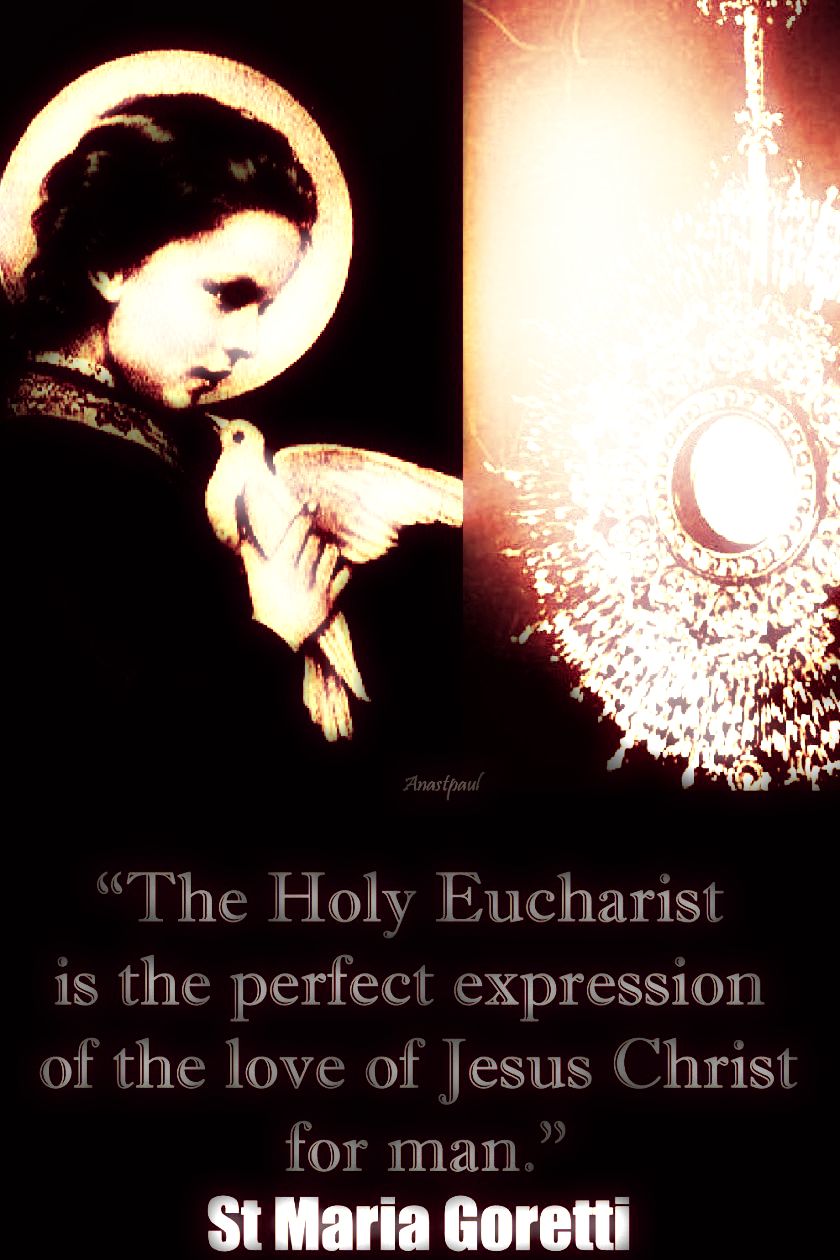 Why, one will hardly die for a righteous man—though perhaps for a good man, one will dare even to die.   But God proves his love for us in that while we were yet sinners Christ died for us………..Romans 5:7-8

REFLECTION – “The new commandment, “Love one another as I have loved you” (Jn 15:12), urges us to pattern our love on the example of Jesus, who dies that we may live.
If our ability to love in a divine way seems unfairly offset by an impossible ideal—in other words, that Jesus can love like God because He is God but we can’t—then we have to reckon with the violent, yet highly avoidable death of an eleven-year-old girl.   When you find a mere human being, loving as God loves by dying as God dies and forgiving as God forgives, you encounter someone who understands not only the force of the new commandment – but also of the extent of the self-sacrifice involved in loving like Jesus.”………Fr John Henry Hanson, O. Praem.

PRAYER – Lord God, You alone can give the grace of innocence and love  . By Your grace, St Maria Goretti, though as yet but a young child, was able to offer herself in death for Your sake.   As You crowned her virginity with martyrdom, grant us, by her intercession, constancy in Your love.   We make our prayer through Christ our Lord, in union with the Holy Spirit, one God forever and ever – St Maria pray for us! amen. 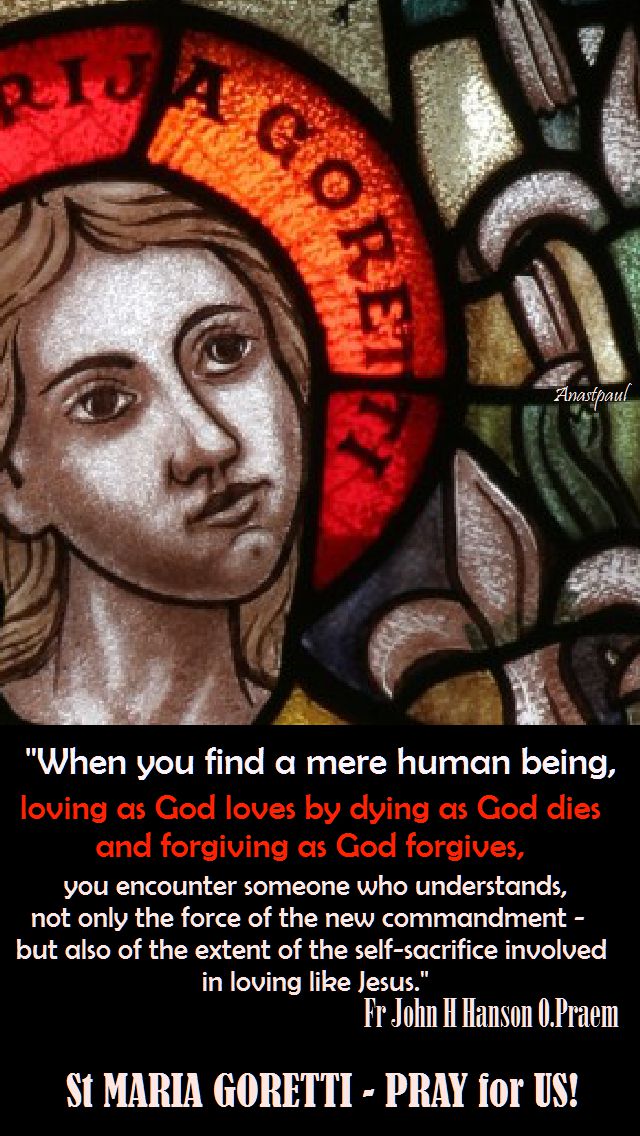 Official Prayer
for the intercession of
St Maria Goretti

O Saint Maria Goretti you,
strengthened by God’s grace,
did not hesitate,
even at the age of twelve,
to shed your blood
and sacrifice life itself,
to defend your virginal purity,
look graciously on
the unhappy human race
which has strayed
far from the path
of eternal salvation.
Teach us all and especially youth,
with what courage and promptitude,
we should flee, for the love of Jesus,
anything that could offend Him
or stain our souls with sin.
Obtain for us from our Lord,
victory in temptation,
comfort in the sorrows of life
and the grace
which we earnestly beg of you
…………………… (your intention)
and may we one day,
enjoy with you,
the imperishable glory of Heaven.
Amen

Saint of the Day – 6 July – Blessed Sr Nazaria of Saint Teresa of Jesus (Nazaria Ignacia March y Mesa) (1889-1943) Religious and Founder of the Missionaries of the Crusade (later renamed Congregation of the Missionary Crusaders of the Church) – born on 10 January 1889 at Arcos de Santa María N° 41 (Augusto Figueroa), Madrid, Spain and died on 6 July 1943 in the Rivadavia Hospital, Buenos Aires, Argentina of complications from pneumonia and tuberculosis.   Patronage – Missionaries of the Crusade.

Fourth of eighteen children born to José Alejandro March y Reus, a merchant, fisherman and industrial worker and Nazaria Mesa Ramos;  Nazairi had a twin sister, Ignazia, and ten brothers who survived infancy.   She and her sister were baptised on the day they were born, Nazaria made her First Communion on 21 November 1898 and made a personal vow of consecration to God.   Unlike many children who are drawn to religious life at an early age, her family was indifferent to the faith and grew so tired of her devotions that they once “grounded” her from going to Mass.   By the time she was confirmed on 15 March 1902, which was celebrated by Blessed Marcelo Spínola y Maestre, her family had grown used to her piety and allowed her to join the Franciscan Third Order and more actively practice her faith.   She succeeded in getting several of them to return to the Church.

In late 1904, business failures led the family to move to Mexico.   On the trip, Nazaria met sisters in the Instituto de Hermanitas de los Ancianos Desamparados (Institute of Sisters of the Abandoned Elders) and was so inspired by their charism that on 7 December 1908 she followed a calling to religious life and entered the Institute in Mexico City, Mexico; she made her perpetual vows on 1 January 1915 and took the name Sister Nazariade Sainte-Thérèse.   Her diaries of the time show a deep devotion to her calling but struggles with her vows of obedience to her superiors.

She was assigned to the Institute hospice in Oruro, Bolivia where she worked as a cook, housekeeper, nurse and occasional beggar to support the poor and neglected for twelve years.   The region around Oruro was not entirely Christian, many Protestant groups were establishing missions and the few priests in the area were often lax or lived scandalous lives.   Beginning in 1920 Sister  Nazaria began to feel a call to found a new congregation devoted to missionary work, evanglisation and religious education.   On 18 January 1925, the feast of the Chair of Saint Peter, Sister  made a special vow of obedience to the Pope and on Pentecost that year, she made a vow to work for the union and extension of the Holy Catholic Church.   On 16 June 1925, with six other sisters, she founded the Pontifical Crusade, later renamed the Congregation of the Missionary Crusaders of the Church and began service as their superior.   The mission of the Congregation was to catechise children and adults, support the work of priests, conduct missions and to print and distribute short religious tracts.

Mother Nazaria met with opposition to her work, much of it from within Church administration.   Her sisters in the Institute treated her as a traitor to her original vocation for turning away from their work;  her superiors considered her disobedient and some Claretian clergy considered her a glory-hound, ignoring all the help members of their order had given her.   But Nazaria clung to Christ and pressed on.

Monsignor Felipe Cortesi, while in Bolivia, had worked to help Mother Nazaria to found the Congregation.  When he was assigned to be the apostolic nuncio of Argentina in 1930, he asked had her open a Missionary Crusader house in Buenos Aires.   The Congregation received an early test under fire during the 1932 to 1935 war between Bolivia and Paraguay;   Mother  Nazaria and the sisters cared for and brought the sacraments to soldiers on both sides and helped establish homes for war orphans.   In 1934 she founded the first magazine in Bolivia for women in religious life, Al Adalid de Cristo Rey, and the first female trade union, Sociedad de Obrera Católicas

In early 1934, Monsignor Cortesi asked the Vatican Congregation of Religious to approve the rules for the Crusaders that Nazaria had written, based on Ignatian spirituality.   Later that year, Mother Nazaria travelled to Rome with an Argentinian pilgrimage group to work for the approval of her Rule.   She made pilgrimages to several sites and had a private audience with Pope Pius XI during which Nazaria said that she was willing to die for the Church;  the Pope told her that she must, instead, live and work for the Church.

Leaving Italy for her native Spain, Mother Nazaria founded a retreat centre for spiritual exercises in Madrid under the flag of Uruguay;  the sisters there survived the Spanish Civil War as Franco did not wish to risk the international incident killing them would cause.   With the help of the Bolivian government, Mother Nazaria was able to leave the persecutions in Spain and return to the Americas.   She summoned a general chapter of the Congregation in 1937 to strengthen the unity and zeal of her sisters.   She worked on the spiritual formation of new sisters and set an example by her pious, simple life.   To the superiors of the Congregation houses she always recommended a maternal approach to the sisters in their care, to remember their role as Mother of the house.   When the Spanish Civil War ended, Nazaria returned to Spain to check on the sisters she had left behind, then returned to the Americas for the final time.

The Congregation spread throughout South America and began to work in Portugal, Spain, France, Italy and Camaroon.   Though  Nazaria did not live to see it, the Congregation received Vatican recognition on 9 June 1947 by Pope Pius XII.

She was Beatified on 27 September 1992 by Pope John Paul II in Saint Peter’s Basilica, Rome, Italy.   Her Canonisation was announced on 19 May 2018, when Pope Francis promulgated a decree of a miracle attributed to the intercession of Blessed Nazaria and will take place on 14 October 2018.