“As for what was sown on good soil, this is he who hears the word and understands it;
he indeed bears fruit and yields, in one case a hundredfold, in another sixty and in another thirty.”…Matthew 13:23

“Dear brothers and sisters, Jesus invites us today to look inside ourselves:  to give thanks for our good soil and to tend the soil that is not yet good.

Let us ask ourselves if our heart is open to welcome the seed of the Word of God with faith.

Let us ask ourselves if our rocks of laziness are still numerous and large;  let us identify our thorns of vice and call them by name.

Let us find the courage to reclaim the soil, to effect a conversion of our heart, bringing to the Lord in Confession and in prayer, our rocks and our thorns.” …Pope Francis (Angelus, 16 July 2017) 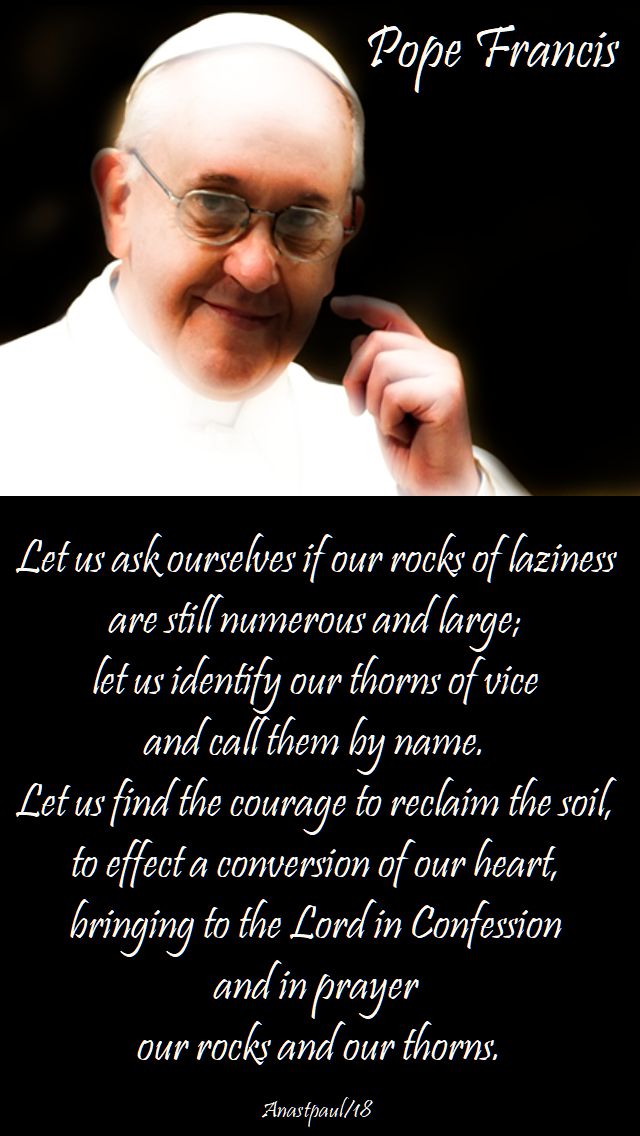 Holy Mary, Mother of God, Pray for us!

“The way Jesus shows you is not easy.
Rather, it is like a path winding up a mountain.
Do not lose heart!
The steeper the road, the faster it rises towards ever wider horizons.”

“As for what was sown on good soil, this is he who hears the word and understands it; he indeed bears fruit, and yields, in one case a hundredfold, in another sixty, and in another thirty.”...Matthew 13:23

REFLECTION – “Indeed, you all know how land is cultivated.   First of all you pull out the weeds and throw away the stones, then you work the ground itself.   You do it again a second time, a third time and finally… you sow.   Oh, let it be like this in our souls!   First of all let us uproot the weeds, that is to say our evil thoughts;  then take out the stones, in other words all our malice and obstinacy.   Finally, let us work our hearts with the plough of the Gospel and the ploughshare of the cross.   Let us break it by repentance, turn over the soil with almsgiving and with charity, prepare it for the seed of Our Lord… that it may joyfully receive the seed of the divine word and bring forth fruit, not just thirty but sixty and a hundredfold.”...St Caesarius of Arles (470-543) Monk & Bishop (Sermons to the people, no.6 passim ; SC 175)

PRAYER – A pure heart create for me O God, put a steadfast spirit within me! (Ps 50[51]) Lord God, bestow a full measure of Your grace to us.   Keep us within in the path of Your commandments, help us to work on the earth of our souls, rooting out the weeds and casting forth the stones of malice.   Grant that by the prayers of St Pope Celestine, who faced so many stones of heresy, we may succeed in attaining sanctity.   Through Christ, our Lord, in union with the Holy Spirit, one God, forever, amen.

Our Morning Offering – 27 July – Friday of the Sixteenth week in Ordinary Time, Year B

Saint of the Day – St Pope Celestine I (died 432), called “the Heresy Fighter.”     Much is unknown about Celestine, including his birthday.   But his reign as Pope – from 422 to his death in 432 – is credited with many achievements.

Celestine I was a Roman from the region of Campania.   Nothing is known of his early history except that his father’s name was Priscus.   According to John Gilmary Shea, Celestine was a relative of the emperor Valentinian.   He appears to have spent some time in Milan, living with the city’s bishop, St Ambrose (340-397).   St Augustine (354-430) (a protégé of Ambrose) seems to have been good friends with Celestine.   Certainly, Celestine sided with St Augustine against the Donatists and Semipelagians.
The first known record of him is in a document of Pope Innocent I from the year 416, where he is spoken of as “Celestine the Deacon”.

Various portions of the liturgy are attributed to him but without any certainty on the subject.   In 430, he held a synod in Rome, at which the teachings of Nestorius were condemned.   The following year, he sent delegates to the First Council of Ephesus, which addressed the same issue.   Four letters written by him on that occasion, all dated 15 March 431, together with a few others, to the African bishops, to those of Illyria, of Thessalonica and of Narbonne, are extant in re-translations from the Greek;  the Latin originals having been lost.

St Celestine actively condemned the Pelagians and was zealous for Roman orthodoxy.   To this end he was involved in the initiative of the Gallic bishops to send Germanus of Auxerre and Lupus of Troyes travelling to Britain in 429 to confront bishops reportedly holding Pelagian views.

He sent Palladius to Ireland to serve as a bishop in 431. Bishop Patricius (Saint Patrick) continued this missionary work. Pope Celestine strongly opposed the Novatians in Rome; as Socrates Scholasticus writes, “this Celestinus took away the churches from the Novatians at Rome also and obliged Rusticula their bishop to hold his meetings secretly in private houses.”   He was zealous in refusing to tolerate the smallest innovation on the constitutions of his predecessors. As St Vincent of Lerins reported in 434:

Holy Pope Celestine also expresses himself in like manner and to the same effect.   For in the Epistle which he wrote to the priests of Gaul, charging them with connivance with error, in that by their silence they failed in their duty to the ancient faith, and allowed profane novelties to spring up, he says: “We are deservedly to blame if we encourage error by silence.    Therefore rebuke these people.    Restrain their liberty of preaching.”
In a letter to certain bishops of Gaul, dated 428, St Celestine rebukes the adoption of special clerical garb by the clergy.   He wrote: “We [the bishops and clergy] should be distinguished from the common people [plebe] by our learning, not by our clothes;  by our conduct, not by our dress;  by cleanness of mind, not by the care we spend upon our person”.

The 5th century was something of a boom time for heresy.   Celestine also had to confront Manicheans, Novatians and, above all, Nestorians.   He commissioned St Cyril of Alexandria to look into Nestorianism, which taught that Christ had two persons and denied that Mary was the Mother of God.   Having determined that this was heretical, the Pope deposed Nestorius, restoring faithful Catholics whom Nestorius had excommunicated.

St Celestine died on 26 July 432.   He was buried in the cemetery of St Priscilla in the Via Salaria but his body, subsequently moved, now lies in the Basilica di Santa Prassede.

In art, Saint Celestine is portrayed as a Pope with a dove, dragon, and flame.

Martyrs of Nicomedia – 3 saints: Three Christians martyred together.   The only other information to survive are their names – Felix, Jucunda and Julia. Nicomedia, Asia Minor.

Seven Sleepers of Ephesus:  A group of seven young Christian men who hid in a cave in hopes of avoiding the persecution of Decius in the year 250.   Found and arrested, they were ordered by the pro-consul in Ephesus to renounce their faith; they refused and were sentenced to die.   Legend says that they were walled up in their hiding cave, guarded by the dog Al Rakim; when the cave wall was breached in 479 – they all woke up!
It is likely that the youths were tortured to death in various ways and buried in the cave. The resurrection story confusion came from the phrase “went to sleep in the Lord” which was used to describe the death of Christians and 479 is when their relics were discovered.   Their names were Constantinus, Dionysius, Joannes, Malchus, Martinianus, Maximianus and Serapion.   They were martyred in 250 in Ephesus (in modern Turkey); tradition says that they were walled up in a cave to suffocate but other records indicate that they were tortured to death in various ways.   Their relics discovered in 479 and translated to Marseilles, France and enshrined in a large stone coffin.