This morning, after several Catecheses on various great theologians, I would like to present to you another important figure in the history of theology.   He is Blessed John Duns Scotus, who lived at the end of the 13th century.   An ancient epitaph on his tombstone sums up the geographical coordinates of his biography:  “Scotland bore me, England received me, France taught me, Cologne in Germany holds me”.   We cannot disregard this information, partly because we know very little about the life of Duns Scotus.   He was probably born in 1266 in a village called, precisely, “Duns”, near Edinburgh.
Attracted by the charism of St Francis of Assisi, he entered the Family of the Friars Minor and was ordained a priest in 1291.   He was endowed with a brilliant mind and a tendency for speculation, which earned him the traditional title of Doctor subtilis, “Subtle Doctor”.

Mary is the subject of the Doctor subtilis’ thought.   In the times of Duns Scotus the majority of theologians countered with an objection that seemed insurmountable, the doctrine which holds that Mary Most Holy was exempt from original sin from the very first moment of her conception – in fact, at first sight the universality of the Redemption brought about by Christ might seem to be jeopardised by such a statement, as though Mary had had no need of Christ or His redemption.   Therefore the theologians opposed this thesis.   Thus, to enable people to understand this preservation from original sin Duns Scotus developed an argument that was later, in 1854, also to be used by Bl Pope Pius IX when he solemnly defined the Dogma of the Immaculate Conception of Mary.   And this argument is that of “preventive Redemption”, according to which the Immaculate Conception is the masterpiece of the Redemption brought about by Christ because the very power of His love and His mediation obtained, that the Mother be preserved from original sin.   Therefore Mary is totally redeemed by Christ but already before her conception.   Duns Scotus’ confreres, the Franciscans, accepted and spread this doctrine enthusiastically and other theologians, often with a solemn oath, strove to defend and perfect it.

In this regard I would like to highlight a fact that I consider relevant.   Concerning the teaching on the Immaculate Conception, important theologians like Duns Scotus enriched what the People of God already spontaneously believed about the Blessed Virgin and expressed in acts of devotion, in the arts and in Christian life in general with the specific contribution of their thought.   Thus faith both in the Immaculate Conception and in the bodily Assumption of the Virgin was already present in the People of God, while theology had not yet found the key to interpreting it in the totality of the doctrine of the faith.   The People of God therefore precede theologians and this is all thanks to that supernatural sensus fidei, namely, that capacity infused by the Holy Spirit that qualifies us to embrace the reality of the faith with humility of heart and mind. In this sense, the People of God is the “teacher that goes first” and must then be more deeply examined and intellectually accepted by theology.

May theologians always be ready to listen to this source of faith and retain the humility and simplicity of children!   I mentioned this a few months ago saying: “There have been great scholars, great experts, great theologians, teachers of faith who have taught us many things.   They have gone into the details of Sacred Scripture… but have been unable to see the mystery itself, its central nucleus…. The essential has remained hidden!… On the other hand, in our time there have also been “little ones” who have understood this mystery.   Let us think of St Bernadette Soubirous; of St Thérèse of Lisieux, with her new interpretation of the Bible that is “non-scientific’ but goes to the heart of Sacred Scripture”

Dear brothers and sisters, Bl Duns Scotus teaches us that in our life the essential is to believe that God is close to us and loves us in Jesus Christ and, therefor,e to cultivate a deep love for Him and for His Church.   We on earth are witnesses of this love.   May Mary Most Holy help us to receive this infinite love of God, which we will enjoy eternally to the full in Heaven, when our soul is at last united to God for ever in the Communion of Saints. 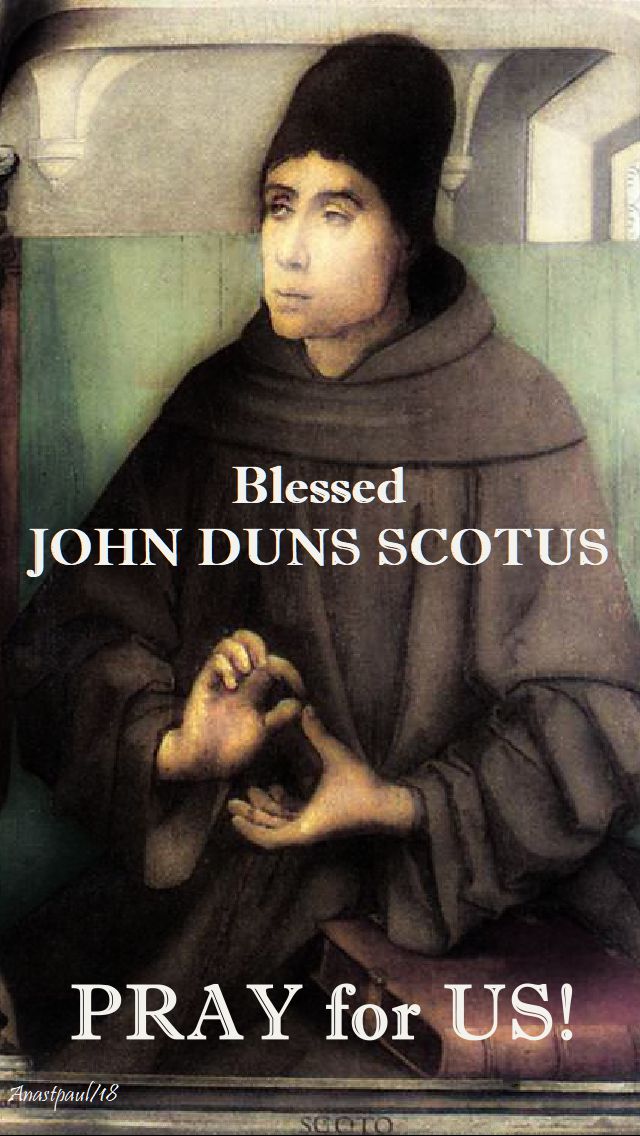