The Anointing with the Holy Spirit

An excerpt from his Mystagogical Catechesis 3

When we were baptised into Christ and clothed ourselves in Him, we were transformed into the likeness of the Son of God.   Having destined us to be His adopted sons, God gave us a likeness to Christ in His glory and living as we do, in communion with Christ, God’s anointed, we ourselves are rightly called “the anointed ones.”   When He said: Do not touch my anointed ones, God was speaking of us.

We became “the anointed ones” when we received the sign of the Holy Spirit.   Indeed, everything took place in us by means of images, because we ourselves are images of Christ.   Christ bathed in the river Jordan, imparting to its waters the fragrance of His divinity and, when He came up from them, the Holy Spirit descended upon Him, like resting upon like.   So we also, after coming up from the sacred waters of baptism, were anointed with chrism, which signifies the Holy Spirit, by whom Christ was anointed and of whom blessed Isaiah prophesied in the name of the Lord – The Spirit of the Lord is upon me, because He has anointed me. He has sent me to preach good news to the poor.

Christ’s anointing was not by human hands, nor was it with ordinary oil.   On the contrary, having destined Him to be the Saviour of the whole world, the Father Himself anointed Him with the Holy Spirit.   The words of Peter bear witness to this – Jesus of Nazareth, whom God anointed with the Holy Spirit.   And David the prophet proclaimed: Your throne, O God, shall endure for ever; your royal sceptre is a sceptre of justice.   You have loved righteousness and hated iniquity; therefore God, your God, has anointed you with the oil of gladness above all your fellows.

The oil of gladness with which Christ was anointed was a spiritual oil, it was in fact the Holy Spirit Himself, who is called the oil of gladness, because He is the source of spiritual joy.   But we too have been anointed with oil and by this anointing, we have entered into fellowship with Christ and have received a share in His life.   Beware of thinking that this holy oil is simply ordinary oil and nothing else.   After the invocation of the Spirit it is no longer ordinary oil but the gift of Christ and by the presence of His divinity, it becomes the instrument, through which we receive the Holy Spirit.   While symbolically, on our foreheads and senses, our bodies are anointed with this oil that we see, our souls are sanctified by the holy and life-giving Spirit.

“…only the Cross of Christ
sheds light on the path of this life….
God is in the detached heart,
in the silence of prayer,
in the voluntary sacrifice to pain,
in the emptiness of the world and its creatures.
God is in the Cross and,
as long as we do not love the Cross,
we will not see Him, or feel Him….
If the world and men knew….
But they will not know,
they are very busy in their interests,
their hearts are very full of things
that are not God.”

“How good God is, I thought!
There is peace everywhere
except in the human heart.
…God is so good to me that,
in the silence,
He speaks to my heart
and teaches me,
little by little,
sometimes in tears,
always with the cross,
to detach myself from creatures,
not to look for perfection
except in Him …”

The message of the cross
is foolishness to those
who are perishing
but to us,
who are being saved,
it is the power
of God…

One Minute Reflection – 26 April – Friday of Easter week, Gospel: John 21:1–14 and the Memorial of Our Lady of Good Counsel

Just as day was breaking, Jesus stood on the beach, yet the disciples did not know that it was Jesus...John 21:4

REFLECTION – “Today’s Gospel, tells us much but let us look at two things:
1. there is no guarantee that, just because a persons has ‘seen’ and ‘heard’ Jesus, he/she will obey His commands or continue His mission.   It is possible that, even after such an experience, one will continue in the old ways; and 2. any mission that is undertaken without the help of the Lord, will rarely meet with success as is evident in the disciples’ failure to catch anything, even after all their strenuous efforts.
Sometimes, it is the words of a stranger that result in the transformation of a situation. To hear these words, it is important to be as open and receptive as the disciples were, though they did not know who that stranger was.   If the disciples, instead of listening to what the stranger was saying, had acted arrogantly and with pride, they would never have made the miraculous catch and may never have encountered Jesus.”…Fr Errol Fernandes SJ 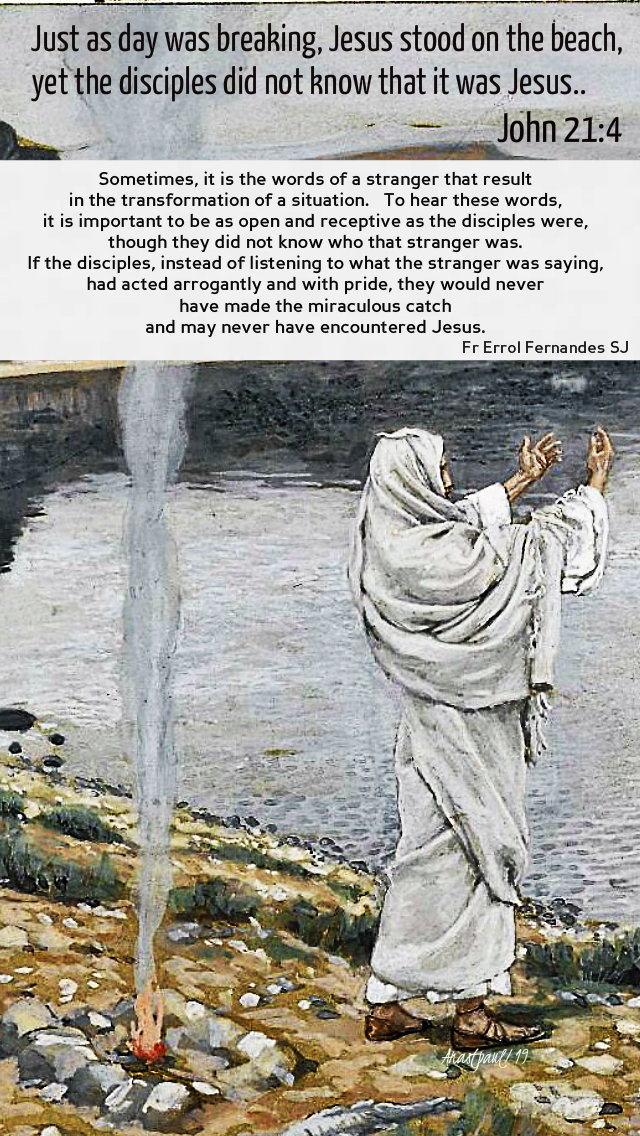 PRAYER – Almighty, ever-living God, You offer the covenant of reconciliation to mankind in the mystery of Easter.   Cleanse our hearts by Your truth and guide our lives by Your holiness, may we do what is right and pleasing to You.   Grant that what we celebrate in worship, we may carry out in our lives.   May our Holy Mother of Good Counsel, ever keep us in her prayers and care.   Through Christ, our Lord in the unity of the Holy Spirit, all glory and honour to You, forever, amen

We pray to You, O Lord,
who are the supreme Truth,
and all truth is from You.
We beseech You, O Lord,
who are the highest Wisdom,
and all the wise depend on You
for their wisdom.
You are the supreme Joy,
and all who are happy owe it to You.
You are the Light of minds,
and all receive their understanding from You.
We love, we love You above all.
We seek You, we follow You,
and we are ready to serve You.
We desire to dwell under Your power
for You are the King of all.
Amen 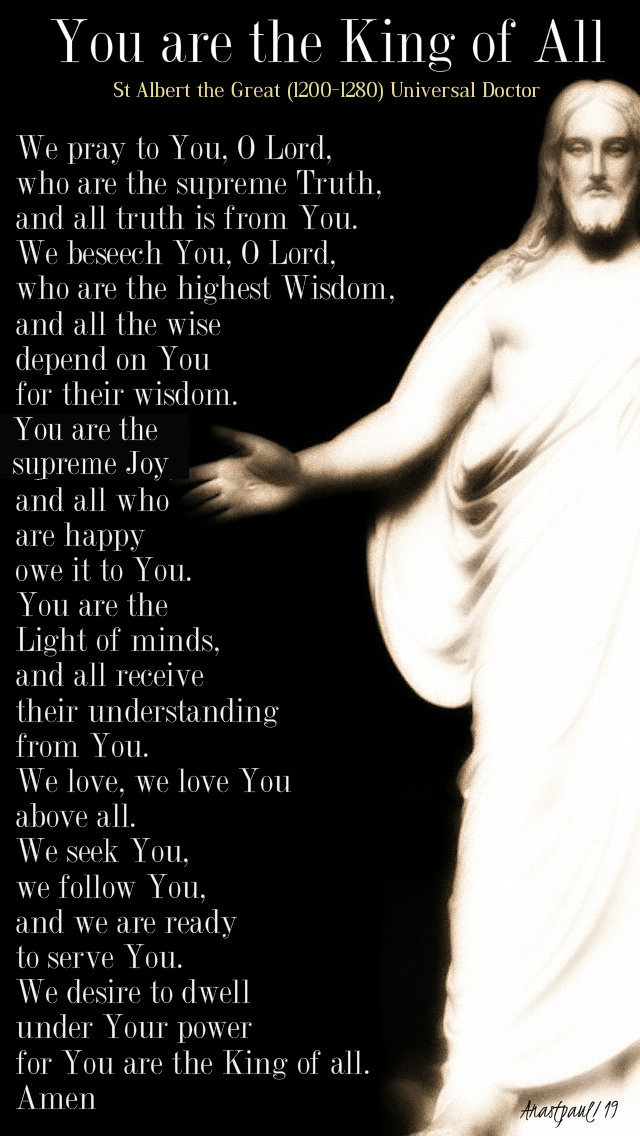 Saint of the Day – 26 April – Saint Paschasius Radbertus (785–865) Monk, Abbot, Theologian – born 785 at Soissons, France and died in 865 of natural causes.   St Paschasius was a Carolingian theologian and the abbot of Corbie, a monastery in Picardy founded in 657 or 660 by the queen regent Bathilde with a founding community of monks from Luxeuil Abbey.   His most well-known and influential work is an exposition on the nature of the Eucharist written around 831, entitled De Corpore et Sanguine Domini.

Paschasius was an orphan left on the steps of the convent of Notre-Dame de Soissons.   He was raised by the nuns there and became very fond of the abbess, Theodrara. Theodrara was sister of St Adalard of Corbie (C 751-827) and St Wala of Corbie (c 755–836), two monks (and both abbots prior to Paschasius) whom he admired greatly.   At a fairly young age, Paschasius left the convent to serve as a monk under Abbot Adalard, at Corbie.

Through the abbotship of both Adalard and Wala, Paschasius focused on the monastic life, spending his time studying and teaching.   When Adalard died in 826, Paschasius helped ensure Wala would become Abbot in his place.   Wala’s death in 836 brought yet another abbot to Corbie, Ratramnus, who held opposing views to Paschasius on a number of ecclesiastical issues.   Ratramnus wrote a refutation of Paschasius’ treatise on the Eucharist, De Corpore et Sanguine Domini, using the same title.

By 844, Paschasius himself became abbot, however he resigned his title ten years later to return to his studies  . He left Corbie for the nearby monastery of St Riquier, where he lived in voluntary exile for some years.   Why he resigned is unknown, however, it is likely that his actions were motivated by factional disputes within his monastic community, misunderstandings between himself and the younger monks were likely factors in his decision.   He returned to Corbie late in life and resided in his old monastery until his death in 865.

St Paschasius’ body was first buried at the Church of St John in Corbie.   After numerous reported miracles, the Pope ordered his remains to be removed and interred in the Church of St Peter, Corbie.   He was Canonised in 1073 by Pope Gregory VII.

St Paschasius has an extensive collection of works, including the “Vitae” or Lives of St Adalbert and St Wala and many exegeses on various books of the Bible.  He wrote commentaries on the Gospel of Matthew, Lamentations, a commentary on Revelations and an exposition of Psalm 45, which he dedicated to the nuns at St Mary at Soissons. De Partu Virginis, written for his friend Emma, Abbess of St Mary at Soissons and daughter of Theodrara, describes the lifestyle of nuns.

He also wrote a treatise, titled De Nativitae Sanctae Mariae, regarding the nature of the Virgin Mary and the birth of Jesus Christ.  Paschasius probably wrote much more but none of it has survived through the centuries.

The most well-known and influential work of St Paschasius, ‘De Corpore et Sanguine Domini’ The Body and Blood of Christ (written between 831 and 833), is an exposition on the nature of the Eucharist.   It was originally written as an instructional manual for the monks under his care at Corbie and is the first lengthy treatise on the Sacrament of the Eucharist in the Western world.   In it, Paschasius agrees with St Ambrose (340-397) in affirming that the Eucharist contains the true, historical body of Jesus Christ.

According to Paschasius, God is truth itself and, therefore, His words and actions must be true.   Christ’s proclamation at the Last Supper that the bread and wine were His body and blood must be taken literally, since God is truth.   He believes that the transubstantiation of the bread and wine to be used at the Eucharist occurs literally.  Only if the Eucharist is the actual body and blood of Christ can a Christian know it is salvific.

Paschasius believed that the presence of the historical blood and body of Christ allows the partaker a real union with Jesus in a direct, personal and physical union by joining a person’s flesh with Christ’s and Christ’s flesh with his.   To Paschasius, the Eucharist’s transformation into the flesh and blood of Christ is possible because of the principle that God is truth, God is able to manipulate nature, as He created it.

The book was given to Charles the Bald, the Frankish king, as a present in 844, with the inclusion of a special introduction.   The view Paschasius expressed in this work was met with some hostility.   Ratramnus, who preceded Paschasius as Abbot of Corbie, wrote a rebuttal by the same name, by order of Charles the Bald, who did not agree with some of the views Paschasius held.   Ratramnus believed that the Eucharist was strictly metaphorical, he focused more on the relationship between faith and the newly emerging science, while Paschasius believed in the miraculous.

Shortly thereafter, a third monk joined the debate, St Rabanus Maurus (c 780–856), which initiated the Carolingian Eucharist Controversy.   Ultimately, however, the king accepted Paschasius’ assertion and the physical presence of Christ in the Eucharist, which had already been believed for centuries, was cemented by St Paschasius book and cleared the way for a precise understanding of Transubstantiation.