Thought for the Day – 15 September – The Memorial of Blessed Paolo Manna PIME (1872-1952) “A Soul on Fire” – Priest, Missionary in Burma (Myanmar), Superior General of the P.I.M.E., Founder of the Pontifical Missionary Union

In Father Paolo Manna we perceive a special reflection of the glory of God.   He spent his entire life promoting the missions.   In every page of his writings there stands out the person of Jesus, centre of his life and reason for the missions.

Indeed, there are no missions without holiness, as the Encyclical Redemptoris Missio pointed out:   “The missionary spirituality of the Church consists in the movement towards holiness.   One must stir up a new zeal for holiness among missionaries and in the whole Christian community” (n. 90).

“We missionaries often wonder why the work of the conversion of the non-Christian world goes so slowly. We usually give various reasons to explain this painful fact and in truth, the problem may be considered from many angles, some of which do not concern our responsibility.   But for the part that does concern us and it is the main part, the problem has a very clear solution. To save the world, God in His infinite wisdom wanted to have co-workers. God does His part well – do the people called to help Him do their part equally well?
Let us work in such a way that the whole Church, all Christian people, led by their bishops and clergy, truly feel the apostolic duty that is incumbent upon them to promote the propagation of the faith with every means.
Let us work in such a way that that missionaries, the most direct instruments for the conversion of souls, are saints and non-Christians will not be slow to be converted.   The missionary problem has been and still is, almost ignored by the Christian people.   Those who were interested in the past were always a minority and it is extremely painful to see today too, although some progress has been made, how the enormous question is far from being understood and faced fully by clergy and people.   It is extremely painful, because Catholic peoples would have more than enough energies to promote the work of evangelisation more worthily if priests taught, organised and above all inflamed them with a greater spirit of faith and zeal.
Missionaries, also from the human viewpoint, have been excellent people…but neither brilliance nor prudence, nor courage have made them great in our eyes and the eyes of God.   They have been great, they have saved many souls, they have founded Churches, mainly because they were holy men, that is, spiritual men.   This is the secret, the soul of their zeal, their perseverance and their success; this is the solemn teaching they have handed down to us and which I love to remind you of, so that our missionaries of today and those of tomorrow may always build upon it the first and essential reason for their own sanctification and the sanctification of the souls that are and will be, entrusted to them.
You, missionaries in active service in the field, are particularly concerned with your part of co=operation.   Therefore, I say to you, be holy missionaries by following the footsteps of those great missionaries who went before you and, for the part that concerns you, your apostolic duty will have been done to the full.   The souls the Lord in His merciful designs has entrusted to each one of you that you may lead them to salvation, will be saved and at the end of your days, you will be able to say with the Divine Redeemer:  “(Father) I kept those you had given me true to you name. I have watched over them and not one is lost” (John 17:12).”

Of Manna, Father Piero Gheddo writes:   He was a great writer, superior general, missionary animator, organiser, a man of revolutionary ideas and initiatives  . He was the first in Italy to encourage the clergy to work for Christian unity.   But it was above all his holiness, that led him to comply with God’s plan with humility, loyalty and a spirit of sacrifice.   He was a man of prayer and in spite of poor health, he achieved much.   His missionary animation was genial.   He was known to be a “soul on fire”, in love with Jesus Christ, the only love of his life.” (S.L.) (Fides Service 16/1/2004

Blessed Paolo Manna, Pray for Us! 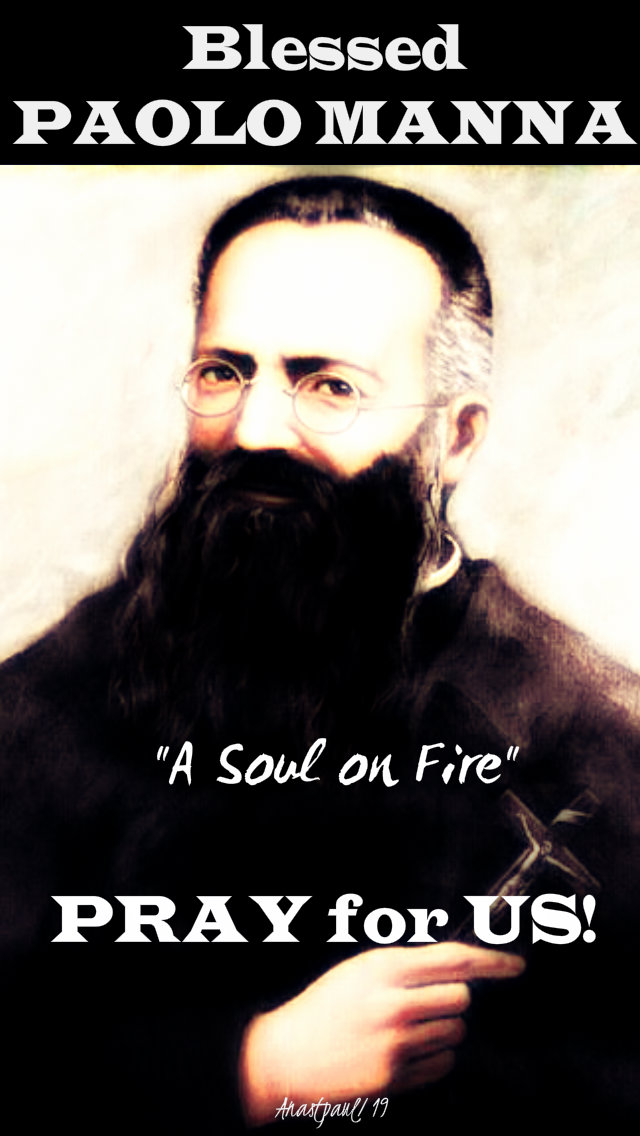