Saint of the Day – 23 September – St Thecla (1st century) Virgin and Martyr, Disciple of St Paul. Patronage – of Tarragona in Catalonia (Spain), where the cathedral has a chapel dedicated to her.   Her feast day remains the town’s major local holiday.

The Acts of Paul and Thecla is a 2nd-century text (circa180) which forms part of the Acts of Paul but also circulated separately.   According to the text, Thecla was a young noble virgin from Iconium who listened to Paul’s “discourse on virginity”, espoused the teachings and became estranged to both her fiancé and her mother.   She sat by her window for three days, listening to St Paul and his teachings.   When they witnessed this, they became concerned that Thecla would follow Paul’s demand “one must fear only one God and live in chastity” and turned to the authorities to punish both Paul and Thecla. 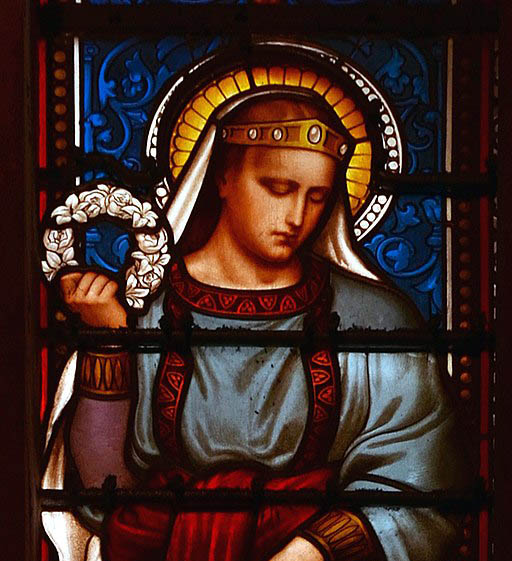 Thecla was miraculously saved from burning at the stake by the onset of a storm and travelled with Paul to Antioch of Pisidia.   There, a nobleman named Alexander desired Thecla and attempted to rape her.   Thecla fought him off, tearing his cloak and knocking his coronet off his head in the process.   She was put on trial for assault.   She was sentenced to be eaten by wild beasts but was again saved by a series of miracles, when the female beasts (lionesses in particular) protected her against her male aggressors. While in the arena, she baptised herself by throwing herself into a nearby lake full of aggressive seals.

She rejoined the Holy Apostle Paul in Myra, travelled to preach the word of God and became an icon encouraging women to imitate her by living a life of chastity and following the word of the Lord.   She went to live in Seleucia Cilicia.   According to some versions of the Acts, she lived in a cave there for 72 years.   As she became a healer, the Hellenistic physicians in the city lost their livelihood and solicited young men to attempt to spoil her virginity at the age of 90.   She called out to God and a new passage was opened in the cave and the stones closed behind her.   She was able to go to Rome and lie down beside Paul’s tomb. 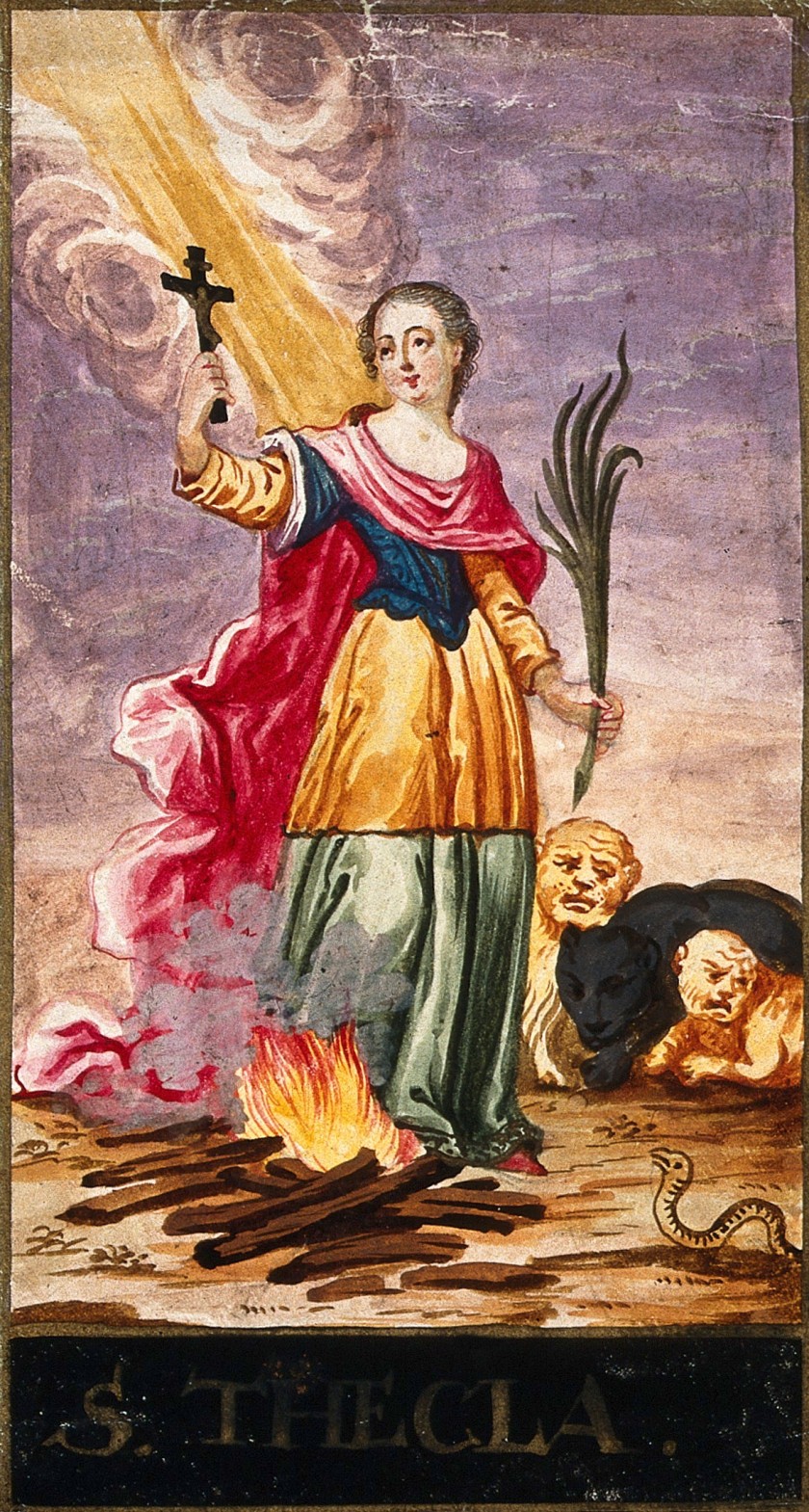 The Church Fathers recount a number of traditions about Thecla.   St Gregory of Nyssa writes in the 4th century (Homily 14 in Cant) that she undertook the sacrifice of herself, by giving death to the flesh [Gal 5:24], practising great austerities, extinguishing in herself all earthly affections, so that nothing seemed to remain living in her but reason and spirit – the whole world seemed dead to her as she was to the world [Gal 6:14]. Macarius Magnes shortly after AD 300 wrote how the message of Christianity was “the Sword, [Matt 10:34] which cuts relations from each other [Matt:10:35], as it cut Thecla from Theocleia.” [Apocriticus ii.7].   Around AD 280, Thecla features as one of the characters in Methodius of Olympus’ Symposium, in which we learn that she was well versed in philosophy and various branches of literature, of eloquent yet modest discourse.   He says that she received her instruction in divine and evangelical knowledge from Paul and was eminent for her skill in sacred science (“Logos 8”).

The martyrdom of Thecla is frequently referred to in the earliest Acts of the Martyrs. Eugenius, a martyr of Trebizond under Diocletian (284–305), couples Thecla with David and Daniel in his prayers.   The exordium of the Acts of Polyeuctes [d. 259] refers to Thecla and Perpetua and there were certainly many virgin martyrs who drew their first inspiration from the same source.   Eugenia of Rome in the reign of Commodus (180–192) is reported in the Acts of her martyrdom to have taken Thecla as her model.

In June 2010, on a wall of the Catacomba di Santa Tecla in Rome, Vatican archaeologists of the Pontifical Commission for Sacred Archaeology, using laser technology to remove layers of clay and lime rind, discovered a frescoed portrait of St Paul the Apostle, “recognisable by his thin face and dark pointed beard…with small eyes and furrowed brow,” which they believe is the oldest image in existence of Paul, dating from the late 4th century.