Saint of the Day – 31 October – Saint Wolfgang of Regensburg (c 934 –994) “The Great Almoner,” Bishop, Monk, Missionary, Aschetic, Apostle of Charity, also known as St Wolfgang of Ratisbon – born in c 924 in Swabia, Germany and died on 31 October 994 at Pupping, Linz (modern Austria) of natural causes.   Patronages – apoplexy, carpenters and wood carvers, paralysis, Regensburg, Germany, stomach diseases, strokes.   He is regarded as one of the three great German saints of the 10th century, the other two being Saint Ulrich and Saint Conrad of Constance.

Wolfgang, was born around 934, of the noble family of the Swabian counts of Pfullingen.

As a young man he was sent to the renowned Benedictine Abbey on the monastic island of Reichenau located on Lake Constance. Here he became a friend of Henry, the brother of the Bishop of Wurzburg.   They studied together at the cathedral school there.

Henry became acquainted with Wolfgang’s intellectual prowess and when he was consecrated Archbishop of Trier in 956, Wolfgang assisted him as a reformer of the Church in southeastern Germany.

After the Archbishop’s death in 964, Wolfgang became a Benedictine in the monastery of Einsiedeln.   There, he was appointed director of the school of the monastery.   The school prospered under his direction and the local bishop – the future St Ulrich – ordained him to the priesthood in 968.   In his youth, Wolfgang had envisioned a secluded life of contemplation but things turned out differently, as he was sent east to evangelise the Magyars in 972.

After this mission, the results of which did not correspond to his zeal, he was recommended to Otto II for the ecclesiastical seat of Ratisbon (present-day Regensburg in Bavaria) and though he begged to return to his monastery, was consecrated in 972.

As Bishop, St Wolfgang continued to live his monastic vocation, retaining his distinctive Benedictine habit and dedicating himself to the same ascetic lifestyle.   Amid the work of preaching and reform, Wolfgang remained a man of prayer, silence and contemplative solitude.   Not surprisingly, the Bishop of Ratisbon made monasticism a focus of his church reforms, reviving religious life in places where it had fallen into disorder. Wolfgang also showed extraordinary care for the poor in his diocese, to such an extent that he was called “the Great Almoner.”   On the other hand, he was also involved in affairs of state at a high leve, and tutored the children of the Duke of Bavaria, including the future Holy Roman Emperor St Henry II.

Wolfgang, despite being one of the great bishops and saints of his time, still encountered serious difficulties in his leadership of the Diocese of Ratisbon.   On one occasion, a political conflict caused him to withdraw from his diocese to a hermitage for a period of time.   Wolfgang is also said to have struggled with the great geographical extent of the diocese, parts of which were eventually entrusted to the Bishop of Prague.

In 994, while travelling in Austria, Wolfgang became sick and died in the village of Pupping.  His body, taken back to his diocese by his friends, was solemnly interred in the chapel of St Emmeran.  Miracles associated with his tomb, including many cures, led to his Canonisation in 1052 by Pope Leo IX.   Several of St Wolfgang’s devotees experienced relief from stomach ailments and he remains a patron saint of such troubles today.   His intercession is also sought by victims of strokes and paralysis and by carpenters. 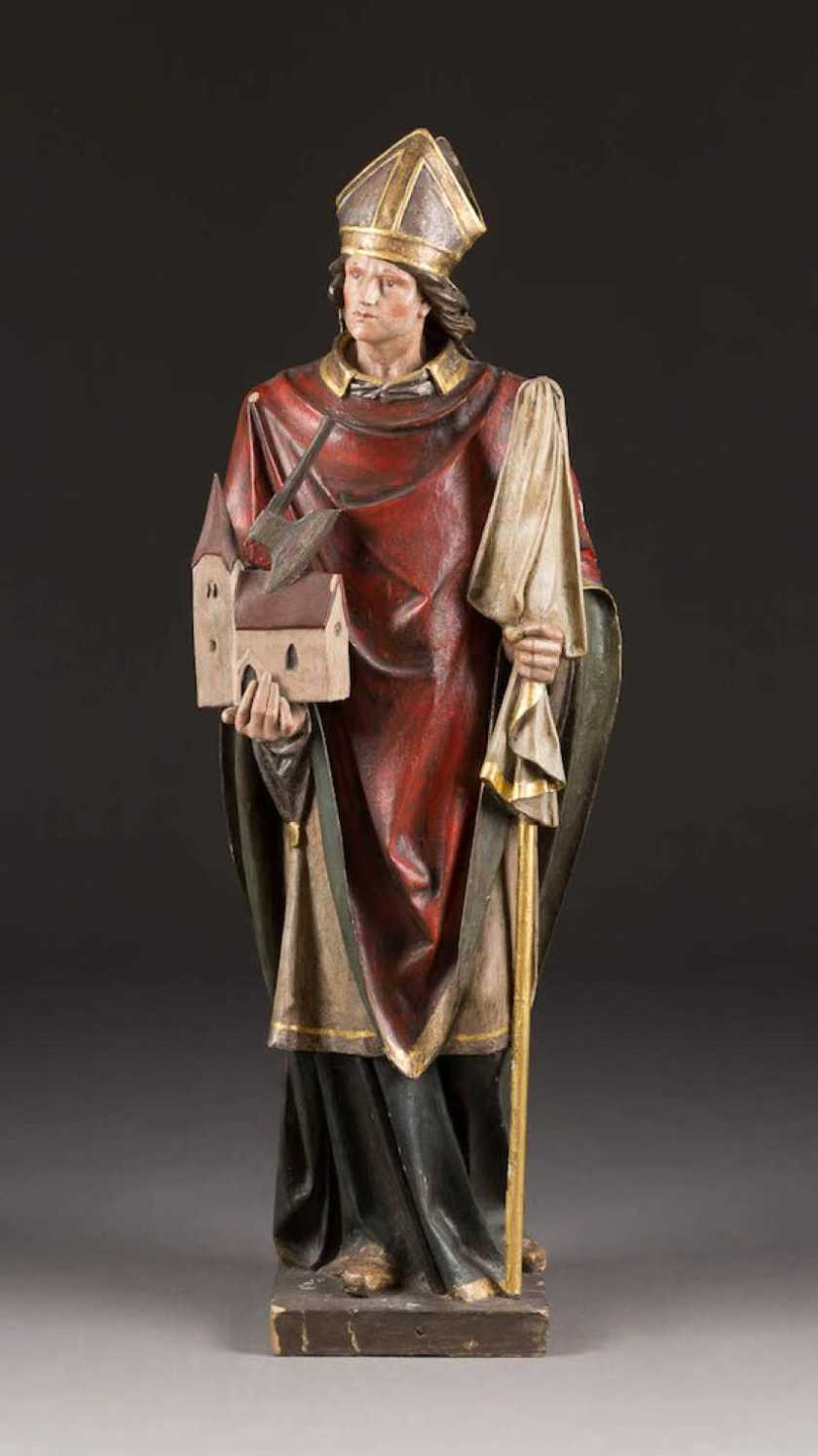