Patronage of Our Lady:   Feast permitted by a 1679 decree of the Sacred Congregation of Rites for all provinces of Spain, in memory of the victories obtained there over infidels. Pope Benedict XIII granted it to the Papal States and it may now be celebrated with due permission by churches throughout the world.

Our Lady of the Gate of Dawn/Our Lady of Ostra Brama:  is the prominent Catholic painting of the Blessed Virgin Mary venerated by the faithful in the Chapel of the Gate of Dawn in Vilnius, Lithuania.  The painting was historically displayed above the Vilnius city gate; city gates of the time often contained religious artefacts intended to ward off attacks and bless passing travellers.
The painting is in the Northern Renaissance style and was completed most likely around 1630.   The Virgin Mary is depicted without the infant Jesus.   The artwork soon became known as miraculous and inspired a following.   A dedicated chapel was built in 1671 by the Discalced Carmelites.   At the same time, possibly borrowing from the Eastern Orthodox tradition, the painting was covered inexpensive and elaborate silver and gold clothes leaving only the face and hands visible.
In 1702, when Vilnius was captured by the Swedish army during the Great Northern War, Our Lady of the Gate of Dawn came to her people’s rescue.   At dawn, the heavy iron city gates of the gate fell crushing and killing four Swedish soldiers.   After this, the Polish-Lithuanian Commonwealth Army successfully counter-attacked near the gate.
In the following centuries, the cult grew and Our Lady became an important part of religious life in Vilnius.   This inspired many copies in Lithuania, Poland and diaspora communities worldwide.   On 5 July 1927, the image was canonically crowned as Mother of Mercy.   The chapel was visited by St Pope John Paul II in 1993.   It is a major site of pilgrimage in Vilnius and attracts many visitors, especially from Poland. 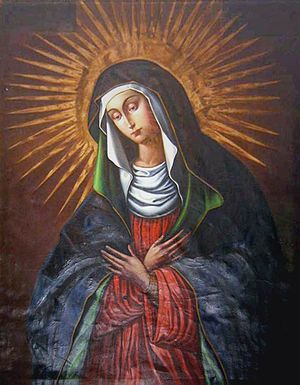 Martyrs of Almeria – (9 saints): Soon after the start of the Spanish Civil War in 1936, the Communist-oriented Popular Front had all clergy and religious arrested and abused as they considered staunch Christians to be enemies of the revolution. Many of these prisoners were executed for having promoted the faith and this memorial remembers several of them killed in the province of Almeria.
• Adrián Saiz y Saiz
• Bienvenido Villalón Acebrón
• Bonifacio Rodríguez González
• Diego Ventaja Milán
• Eusebio Alonso Uyarra
• Isidoro Primo Rodríguez
• Justo Zariquiegui Mendoza
• Manuel Medina Olmos
• Marciano Herrero Martínez
Beatification – 10 October 1993 by St Pope John Paul II