Saint of the Day – 15 January – St Arnold Janssen SVD (1837-1909) Priest, Founder, Missionary, Teacher, advocate of the Sacred Heart, Director of the Apostleship of Prayer,  He founded the Society of the Divine Word, a Catholic missionary religious congregation, also known as the Divine Word Missionaries, as well as two congregations for women  . In 1889 he founded in Steyl, Netherlands, the Missionary Sisters Servants of the Holy Spirit, SSpS and in 1896 at the same place the Holy Spirit Adoration Sisters, SSpSAP.   He is the Patron of all of the Orders which he founded.

Arnold Janssen was born on 5 November 1837 in Goch, a small city in lower Rhineland (Germany).   The second of ten children, his parents instilled in him a deep devotion to religion.   He was Ordained a Priest on 15 August 1861 for the diocese of Muenster and was assigned to teach natural sciences and mathematics in a secondary school in Bocholt.  There he was known for being a strict but just teacher.   Due to his profound devotion to the Sacred Heart of Jesus, he was named Diocesan Director for the Apostleship of Prayer.   This apostolate encouraged Arnold to open himself to Christians of other denominations.

Little by little, he became more aware of the spiritual needs of people beyond the limits of his own Diocese, developing a deep concern for the universal mission of the church. He decided to dedicate his life to awaking in the German church its missionary responsibility.   With this in mind, in 1873 he resigned from his teaching post and soon after founded The Little Messenger of the Sacred Heart.   This popular monthly magazine presented news of missionary activities and it encouraged German-speaking Catholics to do more to help the missions.

These were difficult times for the Catholic Church in Germany.   Bismark unleashed the “Kulturkampf» with a series of anti-Catholic laws, which led to the expulsion of Priests and Religious and to the imprisonment of many Bishops.   In this chaotic situation, Arnold Janssen proposed that some of the expelled priests could go to the foreign missions or at least help in the preparation of missionaries.   Slowly but surely and with a little prodding from the Apostolic Vicar of Hong Kong, Arnold discovered that God was calling him to undertake this difficult task.   Many people said that he was not the right man for the job, or that the times were not right for such a project.   Arnold’s answer was, “The Lord challenges our faith to do something new, precisely when so many things are collapsing in the Church.”

With the support of a number of Bishops, Arnold inaugurated the mission house on 8 September 1875 in Steyl, Holland and thus began the Divine Word Missionaries.   Already on 2 March 1879 the first two missionaries set out for China.   One of these was Joseph Freinademetz (1852-1908) – he would be Canonised on the same day as St Arnold.

Aware of the importance of publications for attracting vocations and funding, Arnold started a printing press just four months after the inauguration of the house.   Thousands of generous lay persons, contributed their time and effort to mission animation in German-speaking countries, by helping to distribute the magazines from Steyl.   From the beginning the new congregation developed as a community of both Priests and Brothers.

The volunteers at the mission house included women as well as men.   From practically the very beginning, a group of women, including Blessed Maria Helena Stollenwerk, served the community.   But their wish was to serve the mission as Religious Sisters.   The faithful, selfless service they freely offered and a recognition of the important role women could play in missionary outreach, urged Arnold to found the mission congregation of the “Servants of the Holy Spirit,” SSpS, on 8 December 1889.   The first Sisters left for Argentina in 1895.

In 1896 Fr Arnold selected some of the Sisters to form a cloistered branch, to be known as “Servants of the Holy Spirit of Perpetual Adoration,” SSpSAP.   Their service to mission would be to maintain an uninterrupted adoration of the Blessed Sacrament, praying day and night for the church and especially for the other two active missionary congregations. 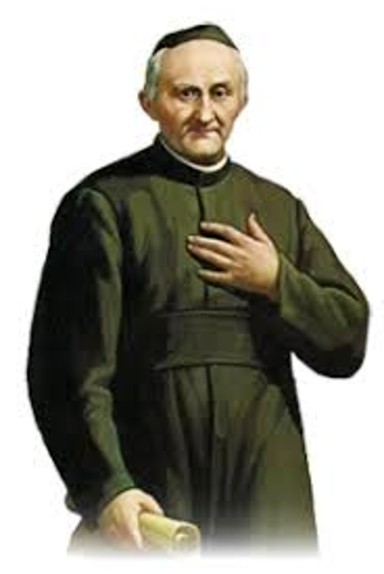 Arnold died on 15 January 1909.   His life was filled with a constant search for God’s will, a great confidence in divine providence and hard work.   That his work has been blessed is evident in the subsequent growth of the communities he founded – more than 6,000 Divine Word Missionaries are active in 63 countries, more than 3,800 missionary Servants of the Holy Spirit and more than 400 Servants of the Holy Spirit of Perpetual Adoration. … Vatican.va