Saint of the Day – 22 May – St Beuvon (Died 986) Pilgrim, Apostle of the poor, Hermit, Knight – also known as St Bobo of Provence, Bovo, Beuve, Bobone.   Born in Provence, France and died on 22 May 986 near Voghera, Pavia, Italy of a fever while on a pilgrimage to Rome, Italy. He is known only from the anonymous biography Vita sancti Bobonis.   Patronages – Vogerea, Italy and cattle.

Beuvon was born around 940 of two nobles, Adelfrido and Odelinda.   It is said that Beuvon was nobilissimis et christianis parentibus natus, that is, born of the most noble and most Christian parents.   They had a castle at Noyers-sur-Jabron in the southeastern region of France, which is where Beuvon was born.

That castle is gone, but each year there is some kind of celebration with cattle on his feast day about where it stood, on account of Beuvon’s being the patron saint of cattle.

Beuvon  was a knight of Provence who helped to conquer Saracen pirates who were invading and raiding the coast.   He is also believed to have fought in the Battle of Tourtour in 973.   At some point during his military career, he experienced the truth of the horror of war and renounced his former life to become a pilgrim and a hermit, devoted to the care of orphans and widows.   He responded to the inner call of the Gospel, leaving behind his family’s wealth for a life of poverty.   Thereafter, he did his best fighting with the Gospel, converting a good number of the Saracens.   He responded to violence by means of charity. 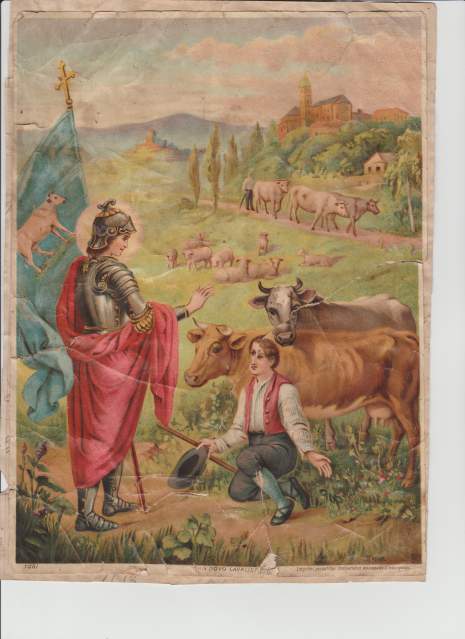 After the loss of his brother, he went on a Pilgrimage to Rome and died at Voghera in Lombardy.   He was buried in Voghera, his grave becoming a site of many miracles.   His relics were enshrined in Voghera in 1469.

St Beuvon , pray for us, that we might fight evil in our day as you did in yours.