Part One:  The Beatitudes (a tiny beginning)

“Blessed are the poor in spirit,
for theirs is the kingdom of heaven.”

“…For everyone who exalts himself will be humbled but he who humbles himself, will be exalted.”

“Humility is the foundation of all the other virtues,
hence, in the soul in which this virtue does NOT exist,
there cannot be any other virtue except in mere appearance.”

“Do you wish to rise? Begin by descending.
You plan a tower, that will pierce the clouds?
Lay first, the foundation of humility.”

” There never can have been
and never can be
and there never shall be,
any sin without pride.”

“Humility is the only virtue
that no devil can imitate.
If pride made demons out of angels,
there is no doubt,
that humility could
make angels out of demons.”

“The one who requests less than he deserves from God
will surely obtain more than he deserves.
This is clearly shown by the tax-collector
who requested forgiveness but obtained justification.
And the thief merely requested
to be remembered in His Kingdom
but he inherited Paradise.”

“‘… Choose the same things as Himself…’”
That which is small and despised,
that is what He has chosen,
my Saviour and God,
who put on our flesh
to confound human fame and wealth.”

St Theodore the Studite (759-826)
Monk and Theologian at Constantinople 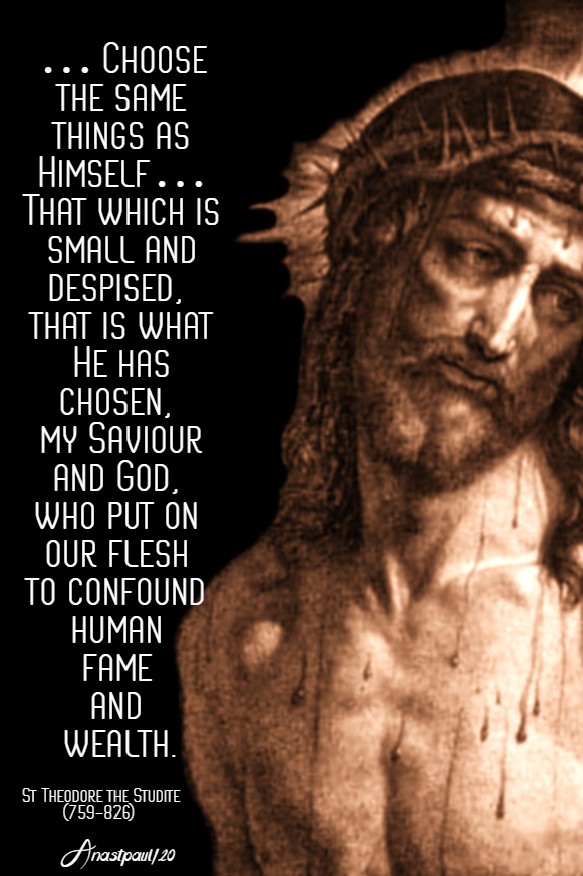 “Your Master is not disturbed by mockery and do you get upset?
He bears spittle, blows, strokes of the lash
and can you not take a harsh word?
He accepts the cross, a humiliating death,
the torture of the nails
and can you not undertake to carry out the lowliest of tasks?
How can you become a sharer in His glory (1 Pt 5:1)
if you will not consent to become a sharer in His humiliating death?”

“We are ever but beginning,
the most perfect Christian,
is to himself but a beginner,
a penitent prodigal
who has squandered God’s gifts
and comes to Him,
to be tried over again,
not as a son
but as a hired servant.”