“What man of you, having a hundred sheep,” He says elsewhere “and losing one of them, does not leave the ninety-nine in the desert and go after that which is lost, until he finds it?   And when he has found it, he lays it upon his shoulders rejoicing.   And on coming home, he calls together his friends and neighbours, saying to them, “Rejoice with me because, I have found my sheep that was lost.”
“I say to you that, even so, there will be joy in heaven over one sinner who repents, more than over ninety nine just, who have no need of repentance” (Cf Lk 15:4-7).

We may often have been amongst the lost sheep which are separated from the flock of Jesus Christ.
We found, perhaps, the poisoned pastures of error and vice and strayed from the path of truth and goodness.
But what happened?
We experienced disillusionment and remorse and knew that we had lost our only real good, which is God.
How sad our fate would have been, if the Good Shepherd, Jesus, had not come to look for us and to enlighten us with His grace.
We should have been lost forever, in the desert of sin!”

Quote/s of the Day – 3 July – Feast of Saint Thomas, Apostle of Christ

Speaking of:  Doubt or Faith?

Jesus said to him,
“Have you come to believe because you have seen me?
Blessed are those who have not seen and have believed.”

“Men imitate the gods whom they adore
and to such miserable being,
their crimes become their religion.”

“For by your doubting, I am taught to believe,
by your forked-tongue, that revealed the wound
on the divine body that was pierced,
I harvest the fruit for myself without pain.”

“Do you desire security?
Here you have it.
The Lord says to you, “I will never abandon you,
I will always be with you.”
If a good man made you such a promise,
you would trust him.
God makes it and do you doubt?
Do you seek a support, more sure
than the word of God, which is infallible?
Surely, He has made the promise,
He has written it,
He has pledged His word for it, it is most certain!”

“I believe
though I do not comprehend
and I hold by faith,
what I cannot grasp
with the mind.” 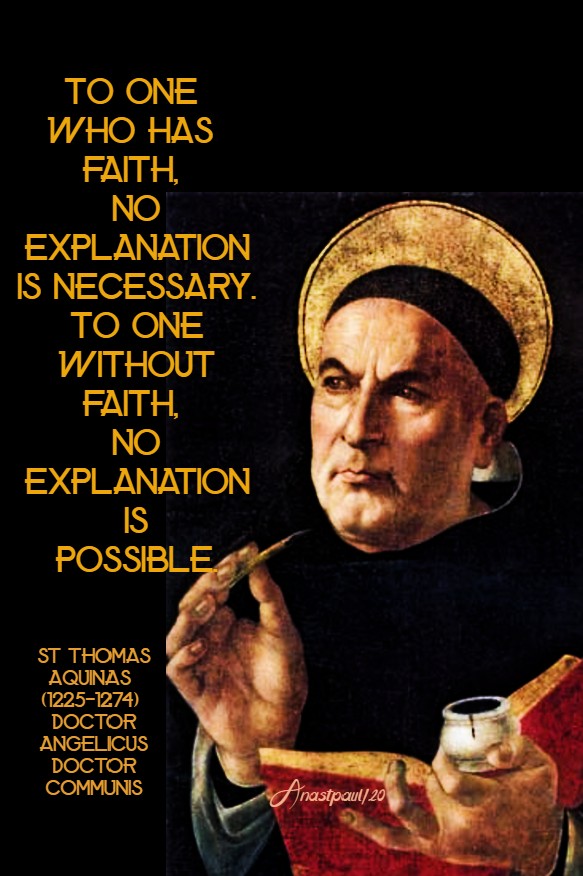 “Believing is
an act of the intellect
assenting to the divine truth,
by command of the will,
moved by God through grace.”

“You cannot be half a saint,
you must be a whole saint
or no saint at all.”

“Divine truth [is not] ours
to summon at will.
If we determine that
we will find it out,
we shall find nothing ….
Let us believe,
evidence will come,
after faith, as it’s reward,
better than before it,
as it’s groundwork.”

PRAYER – Almighty Father,as we honour Thomas the Apostle, let us always experience the help of his prayers. May we have eternal life by believing in Jesus, whom Thomas acknowledged as Lord, for He lives and reigns with You and the Holy Spirit, one God, forever and ever. Amen

Saint Thomas, whom the Saviour chose
When here on earth, as special friend,
Accept our joyful hymn of praise,
And to our earnest prayer attend.

Your love for Christ made you desire
To die with Him and share His plight.
His love for you gave you a throne
Of glory in His realm of light.

Your tortured love could not believe
The Ten had seen Him, as they said
But you must touch His hands and feet
To prove Him risen from the dead.

And later when you saw Him too
With joy, His mercy you adored,
Acclaiming Him as truly God,
And worshipping your risen Lord.

As you once grew to know our Lord,
Give us more faith, both strong and firm,
And make our love grow deeper yet
For Jesus whom we have not seen.

All glory be to Christ, our Lord,
Who by your prayer will grant us grace,
When we have blindly walked in faith,
To see the glory of His face.
Amen

Saint of the Day – 3 July – St Anatolius of Alexandria (Died 283) Bishop, Scholar, Scientiest, Philosoper, Conputist, Mathematiian, Writer – also known as Anatolius of Laodicea.   Born in Alexandria, Egypt and died in 283 at Laodicea, Syria of natural causes.   He was not only one of the foremost scholars of his day in the physical sciences, as well as in Aristotelean philosophy but also a great computist.

Note:  Computist – The computus (Latin for ‘computation’) is a calculation that determines the calendar date of Easter.   Easter is traditionally celebrated on the first Sunday after the Paschal full moon, which is the first full moon on or after 21 March (an approximation of the March equinox).   Determining this date in advance requires a correlation between the lunar months and the solar year, while also accounting for the month, date and weekday of the calendar.

Anatolius was born and raised in Alexandria, Egypt, during the early 3rd century.   Prior to becoming one of the great lights of the Church, Anatolius enjoyed considerable prestige at Alexandria.   According to Eusebius of Caesarea, he was credited with a rich knowledge of arithmetic, geometry, physics, rhetoric, dialectic and astronomy.   Also according to Eusebius, Anatolius was deemed worthy to maintain the school of the Aristotelian succession in Alexandria.   The pagan philosopher Iamblichus studied among his disciples for a short time.

There are fragments of ten books on Arithmetic written by him.   There is also a treatise onthe time of the Paschal celebration.   His famous 19-year Paschal cycle has survived in seven different complete medieval manuscripts of the Latin text De ratione paschali.   Saint Jerome praised his scholarship and writing, however, he was known not just as a scholar but as a humble and deeply religious man.   Ignorance horrified him and part of his work with the poor was to educate them. St Anatolius also held a number of government posts in Alexandria.

A story is told by St Eusebius of the way in which Anatolius broke up a rebellion against the Roman authorities in 263 in a part of Alexandria known then as Bruchium.   It was held by the forces of Zenobia and being violently beleaguered by the Romans was in a state of starvation. Anatolius, who was living in Bruchium at the time, met with the Romans and negotiated the release of non-combatant children, women, the sick and the elderly, saving many and earning him a reputation as a peacemaker.   The rebels, freed of caring for the non-combatants, were able to fight even longer.   However, when they lost, Anatolius found himself with enemies on both sides of the conflict and he decided to leave Alexandria.

Anatolius emigrated to Caesaria, Palestine.   His reputation as a scholar and Christian had preceeded him and he became assistant and advisor to the Bishop.   In 268, while en route to the Council of Antioch, he passed through Laodicea, Syria.   Their Bishop, Saint Eusebius of Laodicea, had just died, they saw Anatolius’ arrival as a gift from God and insisted that he assume the Bishopric.   He accepted and spent his remaining fifteen years there.

Theodotus and Companions – 6 saints: Six Christians who were imprisoned, tortured and martyred together in the persecutions of Trajan. Saint Hyacinth ministered to them in prison. We know nothing else about them but their names – Asclepiodotus, Diomedes, Eulampius, Golinduchus, Theodota and Theodotus. They were beheaded in c110, location unknown.