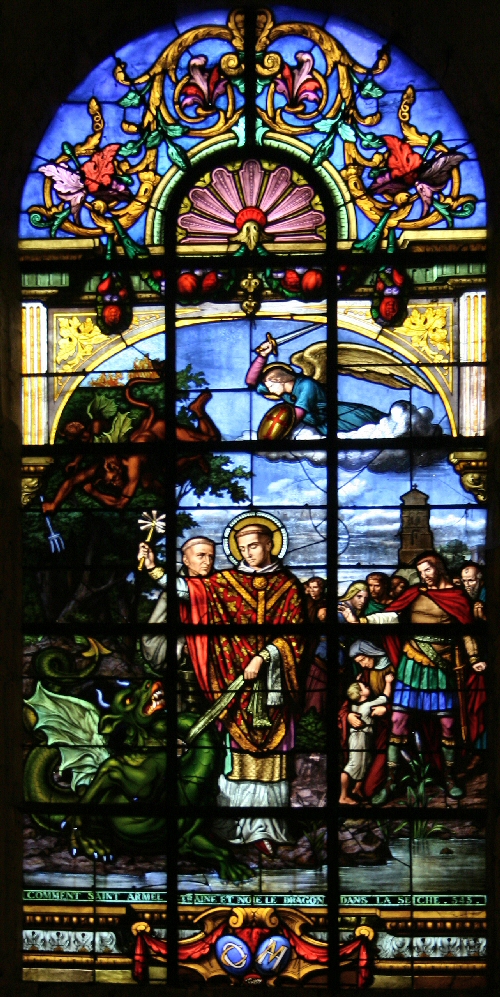 Armel is said to have been a Breton prince, born to the wife of King Hoel while they were living in Glamorgan in Wales in the late 5th century.   He was a cousin of Saint Samson and Saint Cadfan, with whom it is believed, crossed the English Channel to Brittany.

He founded the Abbey of Plouarzel in Brittany and was, from there, called to attend the Court of King Childebert I of Paris.   On the journey, he established Churches at Ergué-Armel, Ploermel and Saint-Armel, which is named after him. 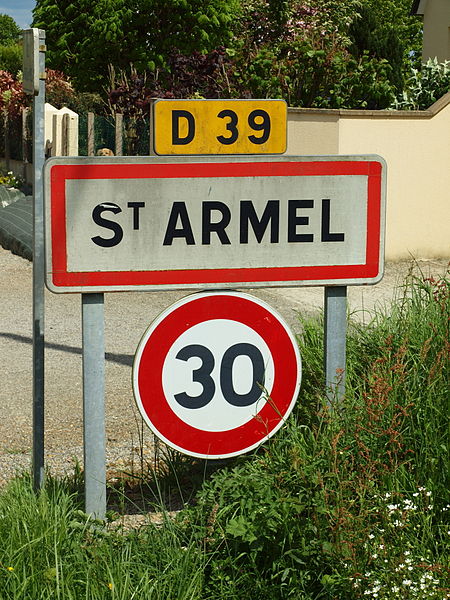 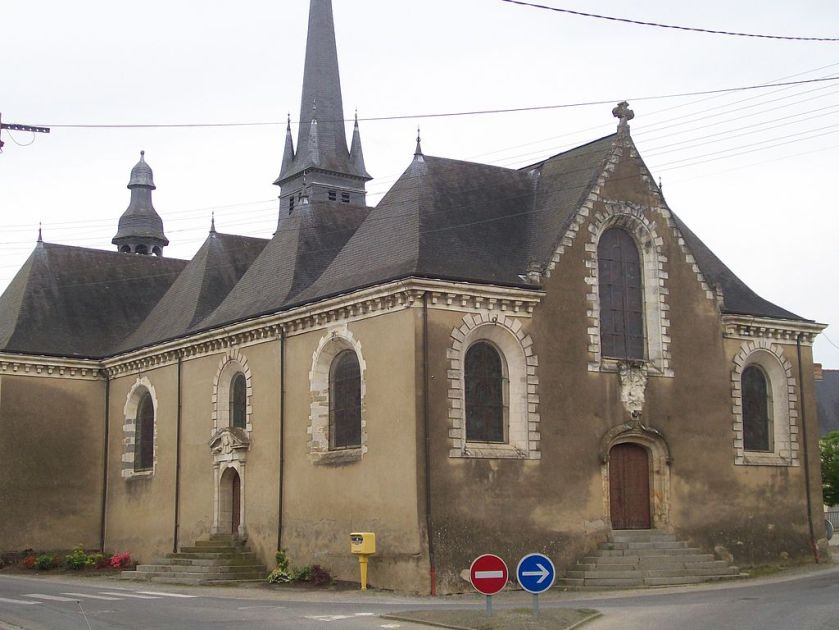 He remained for seven years at the Royal Court, as a spiritual adviser and teacher.   There, he cured the lame and the blind.   Armel provided clean water for the people of Loutéhel.   He struck the ground with his staff and a spring immediately flowed.   Some of the stories of his miracles have been lost but we can guess at them from pictures and carvings showing the saint in action.   The King, in gratitude for his service and holiness, gave him land at Saint-Armel-des-Bochaux in Ille-et-Vilaine where he founded a second Monastery.   After his years at the Court he then retired to the Forest of Teil to spend his time in prayer and penance in the Monastery he had established there.

The most famous story about Armel was something that happened at St Armel-des-Boscheaux.   The district around Armel’s Monastery was being ravaged by a dragon.   The local people came to Armel for help. 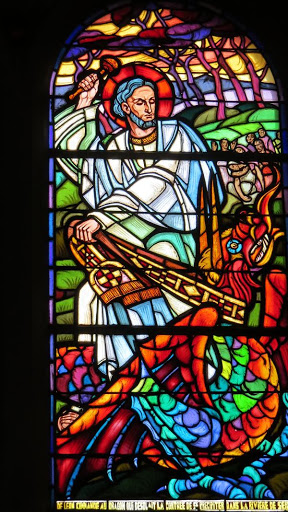 He defeated the dragon, tied it up with his stole and led it to the top of a hill called Mount St Armel.   From there, he commanded it to throw itself into the river Sèche.   He died in this Monastery around 570.

A church called Saint Erme is dedicated to him in Cornwall, perhaps because King Henry VII of England believed that Armel’s intercession saved him from shipwreck off the coast of Brittany.   His earliest known “vita” dates only from the 12th century but his cultus spread from Brittany to Normandy, Anjou and Touraine.   His feast was added to the Sarum Calendar in 1498.

There is a statue, below, of Armel in Henry VII’s chapel at Westminster and another on Cardinal Morton’s tomb at Canterbury.   In paintings on the altar pieces of Romsey Abbey and elsewhere, he may be represented in armour and a chasuble, leading a dragon with a stole around it’s neck. 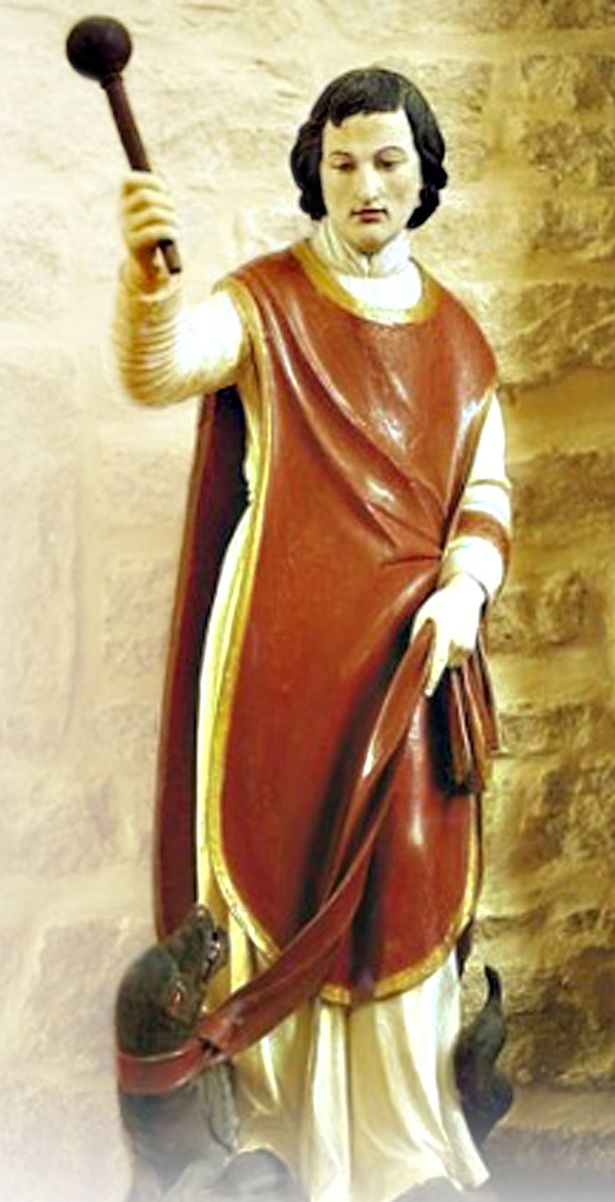 A small chapel is dedicated to him just north of Westminster Abbey, where the St Ermyn Hotel is now. (The name St Ermyn is a corruption of St Armel).   Pilgrims went there to ask the Saint for help.   He was particularly famous for healing gout, ague and other fevers.

In the later Middle Ages, Pilgrimages to Rome or Compostela or even to the Holy Land were still popular but there were also many small-scale local pilgrimages.   It was easy enough to walk from the bustling City of London through the fields and along the river Thames to Westminster on a sunny Sunday afternoon.   You could visit some of the Shrines there, including St Armel’s Chapel, have a drink or a meal in one of the many taverns around the Abbey and walk home in the evening light. There were shops and stalls where you could buy souvenirs, cheap little pewter badges to put on your hat.

Literally thousands of these badges have been dug up on building sites in the City of London, several of them showing St Armel with the dragon. 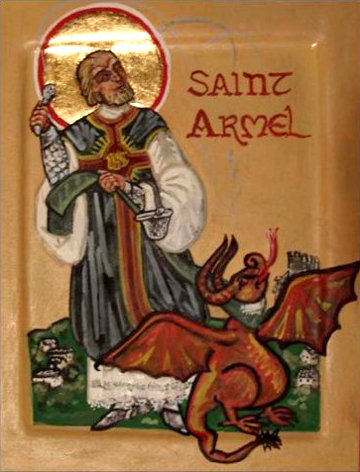