The Athanasian Creed, also known as Pseudo-Athanasian Creed or Quicunque Vult (also Quicumque Vult), is a Christian statement of belief focused on Trinitarian doctrine and Christology.    The Latin name of the creed, Quicunque vult, is taken from the opening words, “Whosoever wishes”.    The creed has been used by Christian churches since the sixth century.    It is the first creed in which the equality of the three persons of the Trinity is explicitly stated.    It differs from the Nicene-Constantinopolitan and Apostles’ Creeds in the inclusion of anathemas, or condemnations of those who disagree with the creed (like the original Nicene Creed).

Widely accepted among Western Christians, including the Roman Catholic Church and some Anglican churches, Lutheran churches (it is considered part of Lutheran confessions in the Book of Concord) and ancient, liturgical churches generally, the Athanasian Creed has been used in public worship less and less frequently.

It was designed to distinguish Nicene Christianity from the heresy of Arianism. Liturgically, this Creed was recited at the Sunday Office of Prime in the Western Church; it is not in common use in the Eastern Church.    The creed has never gained acceptance in liturgy among Eastern Christians since it was considered as one of many unorthodox fabrications that contained the Filioque clause.    Today, the Athanasian Creed is rarely used even in the Western Church.    When used, one common practice is to use it once a year on Trinity Sunday. 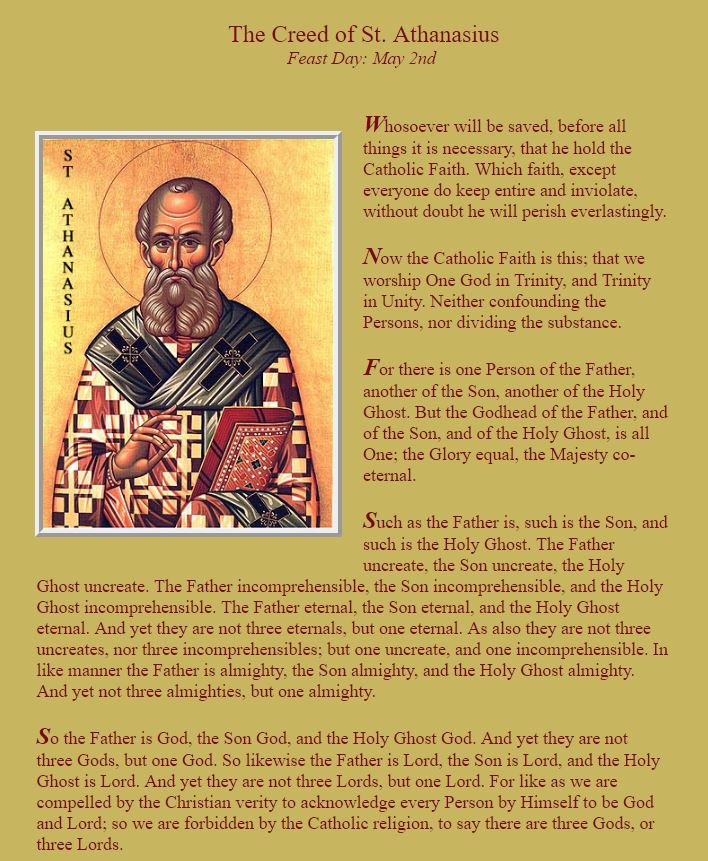 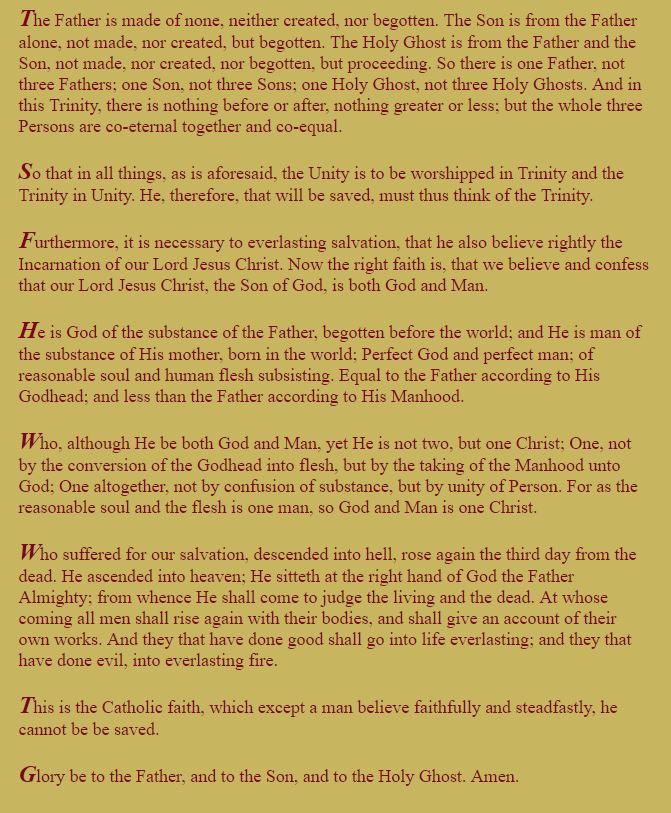 Thought for the Day – 2 May

At certain periods in Church history, it is one man who saves the Church for orthodoxy, one human instrument that Goduses to further His work.   Athanasius suffered many trials while he was bishop of Alexandria.    He was given the grace to remain strong against what probably seemed at times to be insurmountable opposition.    Athanasius lived his office as bishop completely.    He defended the true faith for his flock, regardless of the cost to himself.    In today’s world we are experiencing this same call to remain true to our faith, no matter what.   We should all realise how important we are to the good of others and that, without us, certain people would never hear of God or come to a knowledge of Jesus Christ.   Upon our orthodoxy and fidelity may well depend the growth in faith of many others – what a thought!   Therefore, we need to learn and know the truth as St Athanasius said “You will not see anyone who is really striving after his advancement who is not given to spiritual reading. And as to him who neglects it, the fact will soon be observed by his progress.”

St Athanasius, pray for us! 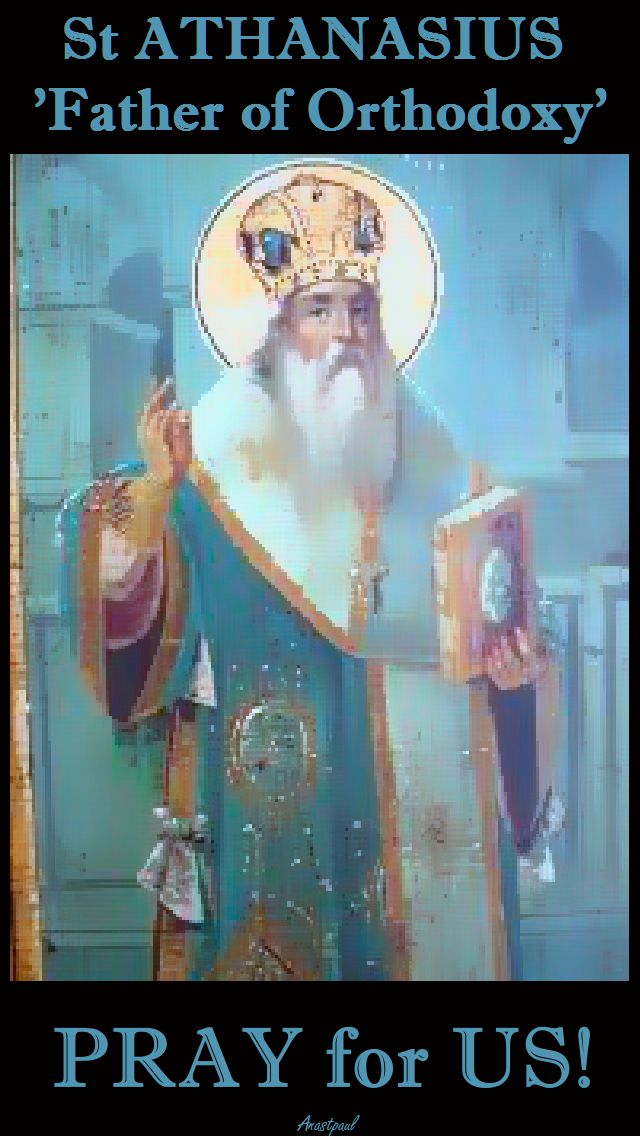 “The Word who became all things for us, is close to us, our Lord Jesus Christ who promises to remain with us always.    He cries out, saying:  See, I am with you all the days of this age.    He is himself the shepherd, the high priest, the way and the door and has become all things at once for us.” 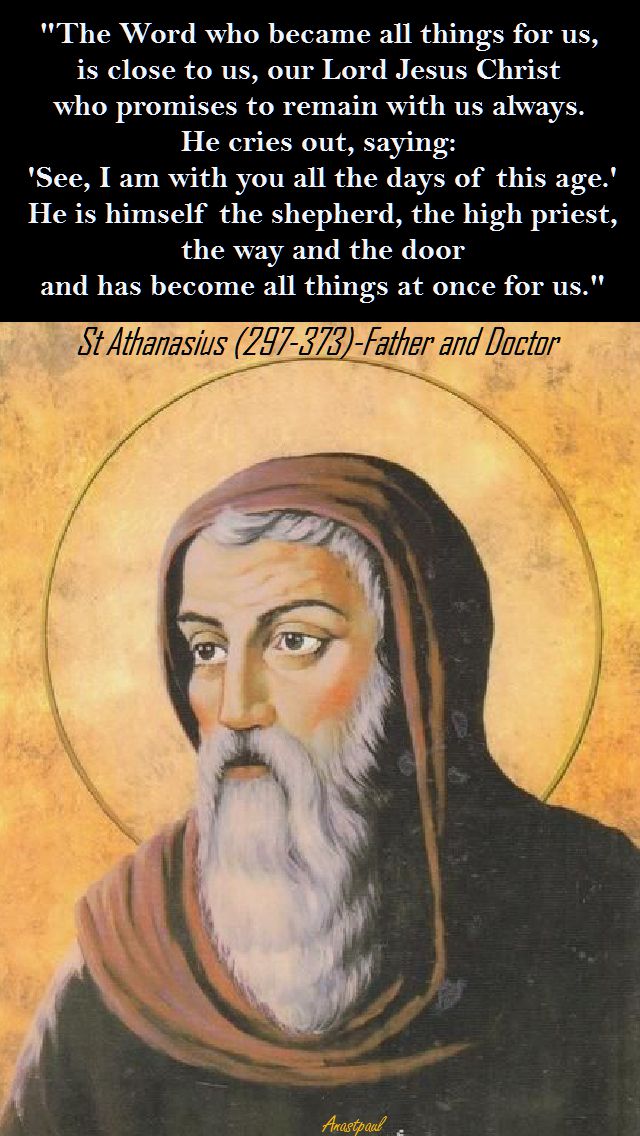 “Christians, instead of arming themselves with swords, extend their hands in prayer.”

“Let us remember the poor and not forget kindness to strangers;  above all, let us love God with all our soul and might and strength and our neighbour as ourselves.” 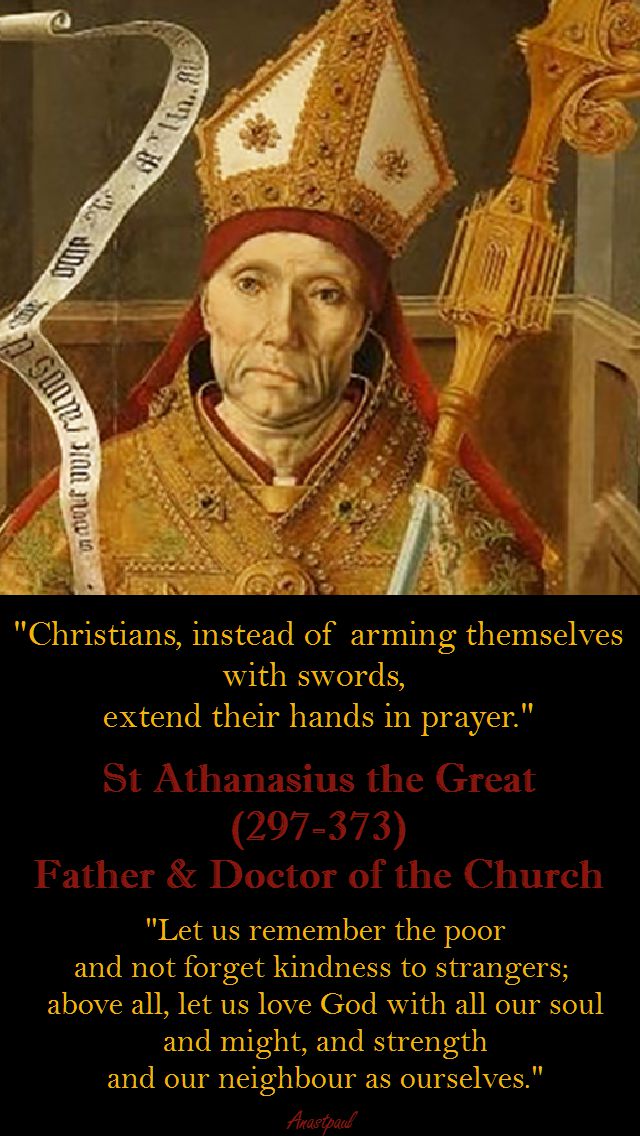 “But what is also to the point, let us note that the very tradition, teaching and faith of the Catholic Church from the beginning was preached by the Apostles and preserved by the Fathers.    On this the Church was founded – and if anyone departs from this, he neither is, nor any longer ought to be called, a Christian.” 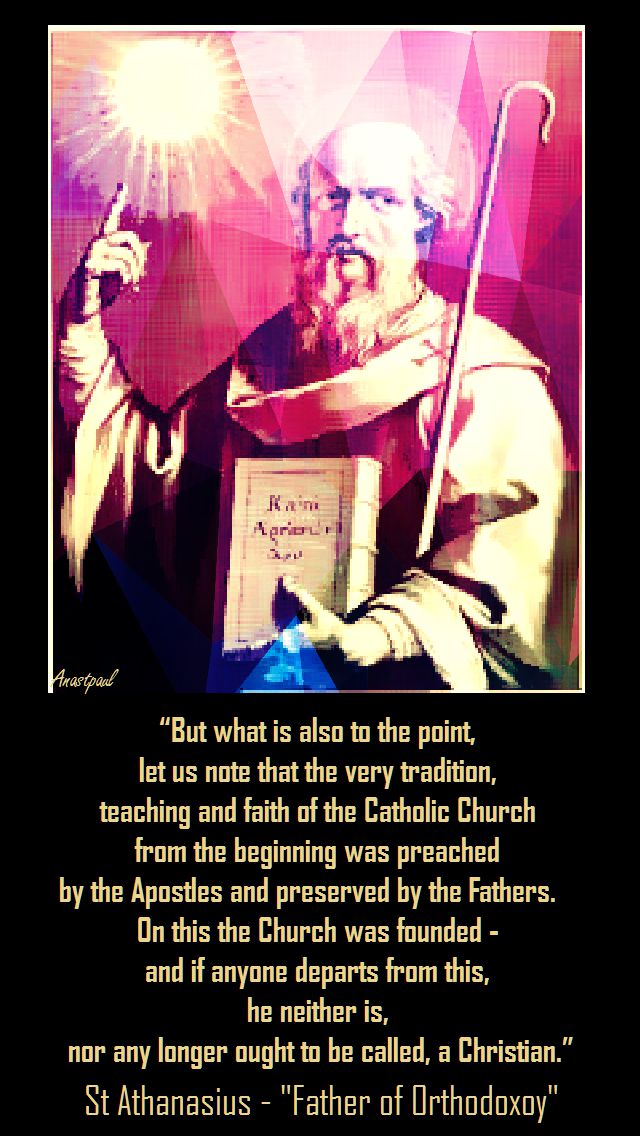 One Minute Reflection – 2 May

Christ….will give a new form to this lowly body of ours and remake it according to the pattern of his glorified body…………Phil 3:21

REFLECTION – Our human body has acquired something great through its communication with the Word.    From being mortal it has been made immortal; though it was a living body it has become a spiritual one…………St Athanasius (297-373) Father and Doctor of the Church

PRAYER – Heavenly Father, help me to respect my body and not subject it to sin.   Let me keep it ready to receive the fullness of the new form given by Your Son, in heaven.    St Athanasius, you taught the world the truth of Christ, please pray for us, amen. 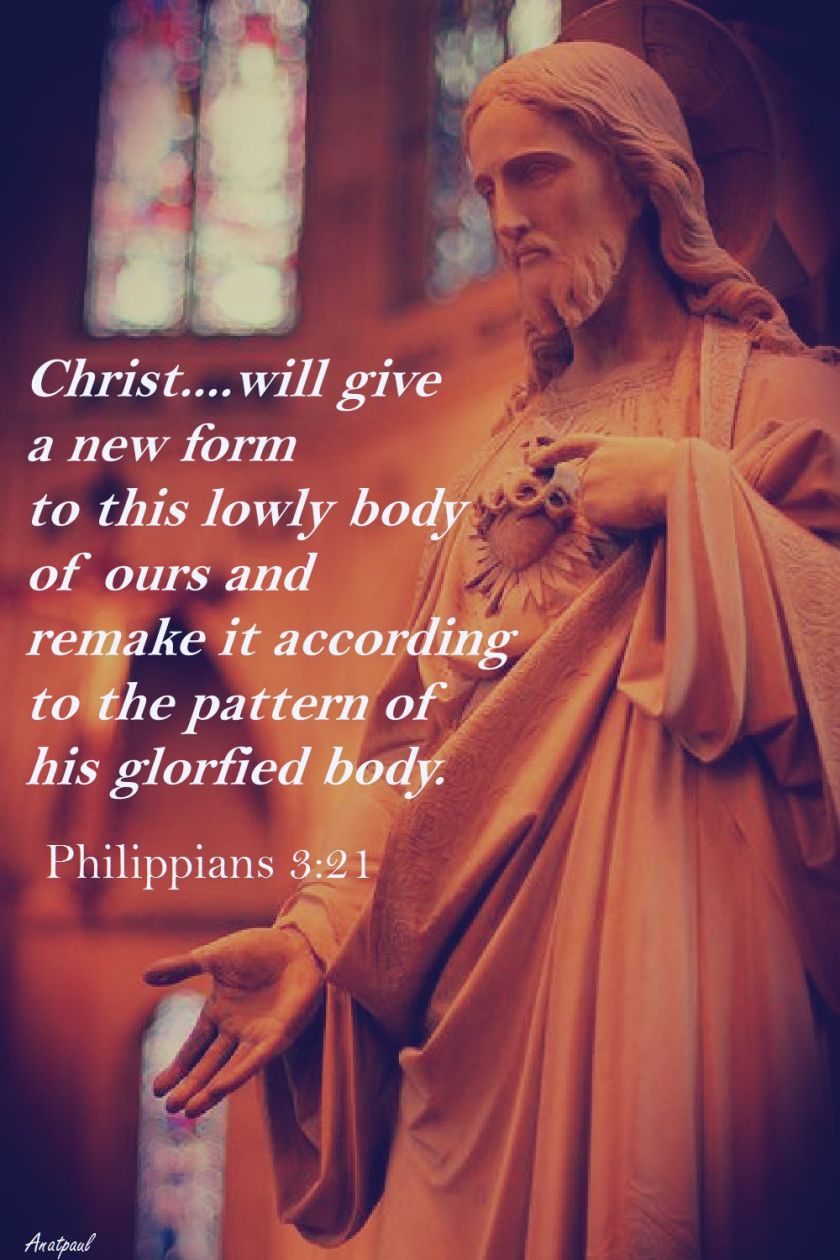 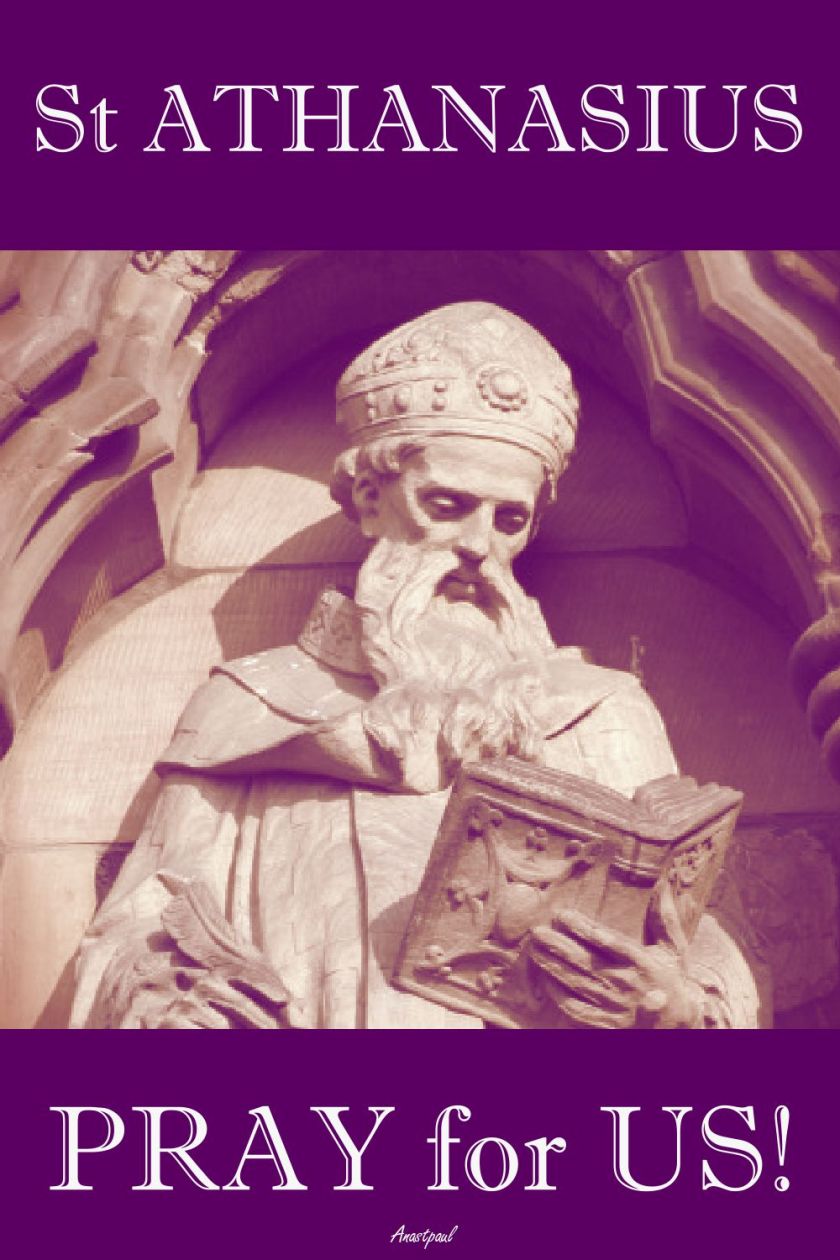 Our Morning Offering – 2 May

It is becoming for you, O Mary,
to be mindful of us,
as you stand near Him who bestowed upon you all graces,
for you are the Mother of God and our Queen.
Come to our aid for the sake of the King,
the Lord God and Master who was born of you.
For this reason you are called “full of grace.”
Be mindful of us, most holy Virgin and bestow on us gifts
from the riches of your graces, O Virgin full of grace.
Amen 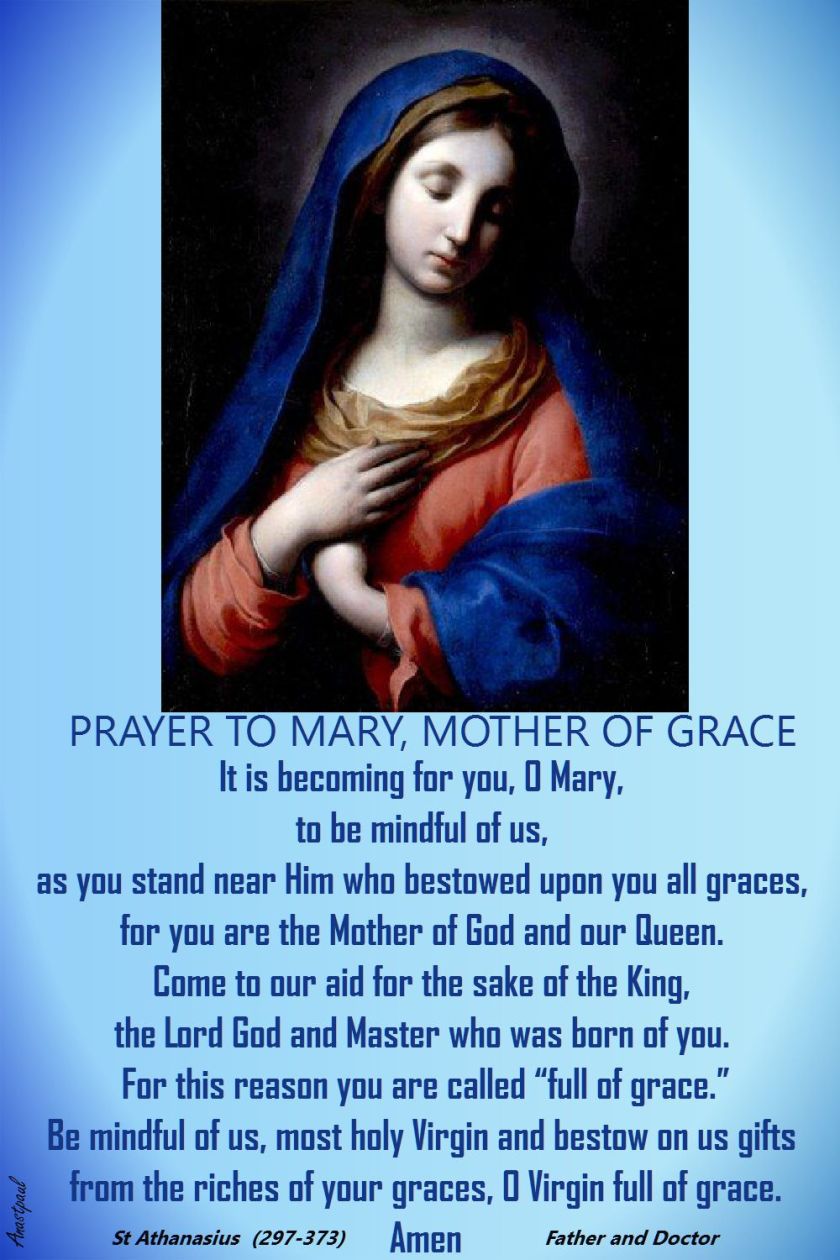 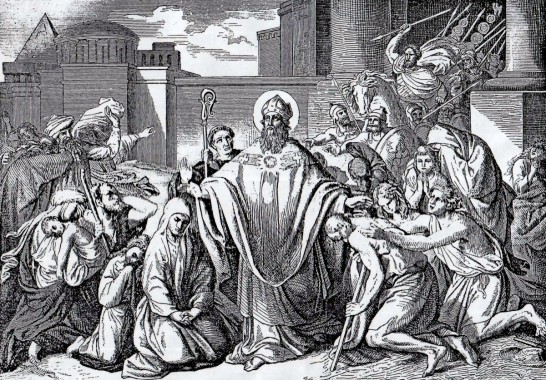 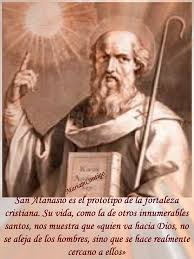 Athanasius was born of Christian parents in Alexandria, Egypt, about 295. As a young man, he spent four years in prayer and solitude in the desert.    There he met Anthony the hermit, who influenced him.    After he left the desert, Athanasius became a priest and was appointed secretary to Alexander, bishop of Alexandria.

Meanwhile, Arius had begun preaching that Jesus was not truly God.    At a church council at Nicaea in 325, Arius and his ideas were condemned and the bishops composed the Nicene Creed.

Conflict with Arius and Arianism as well as successive Roman emperors shaped Athanasius’ career.    In 325, at the age of 27, Athanasius began his leading role against the Arians as a deacon and assistant to Bishop Alexander of Alexandria during the First Council of Nicaea.    Roman emperor Constantine the Great had convened the council in May–August 325 to address the Arian position that the Son of God, Jesus of Nazareth, is of a distinct substance from the Father.    Three years after that council, Athanasius succeeded his mentor as archbishop of Alexandria.    In addition to the conflict with the Arians (including powerful and influential Arian churchmen led by Eusebius of Nicomedia), he struggled against the Emperors Constantine, Constantius II, Julian the Apostate and Valens.    He was known as “Athanasius Contra Mundum” (Latin for Athanasius Against the World). 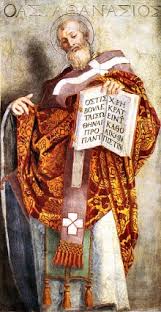 Nonetheless, within a few years after his death, Gregory of Nazianzus called him the “Pillar of the Church”.    His writings were well regarded by all Church fathers who followed, in both the West and the East, who noted their rich devotion to the Word-become-man, great pastoral concern and profound interest in monasticism.    Athanasius is counted as one of the four great Eastern Doctors of the Church in the Roman Catholic Church – he is labeled as the “Father of Orthodoxy”.

Bl. John Henry Newman described him as a “principal instrument, after the Apostles, by which the sacred truths of Christianity have been conveyed and secured to the world”. [Letters..]

Historian Cornelius Clifford says: “His career almost personifies a crisis in the history of Christianity;  and he may be said rather to have shaped the events in which he took part than to have been shaped by them.”

The greater majority of Church leaders and the emperors fell into support for Arianism, so much so that Jerome, 340–420, wrote of the period:  “The whole world groaned and was amazed to find itself Arian”.    He, Athanasius, even suffered an unjust excommunication from Pope Liberius (325–366) who was exiled and leant towards the Arians, until he was allowed back to the See of Rome. Athanasius stood virtually alone against the world. 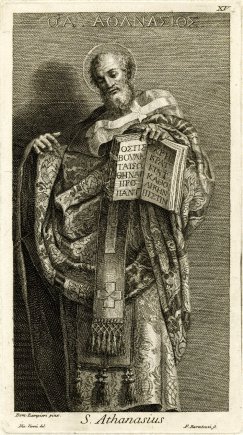 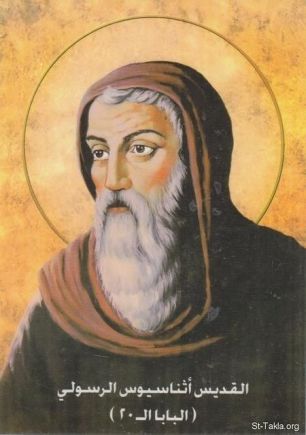 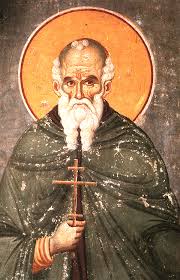 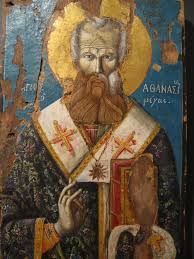 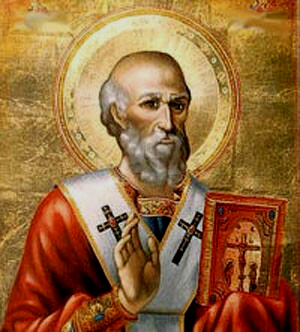