1 May – The Memorial of St Joseph the Worker

Saint Joseph, guardian of Jesus and chaste husband of Mary,
you passed your life in loving fulfillment of duty.
You supported the holy family of Nazareth with the work of your hands.
Kindly protect those who trustingly come to you.
You know their aspirations, their hardships, their hopes.
They look to you because they know you will understand and protect them.
You too knew trial, labour and weariness.
But amid the worries of material life,
your soul was full of deep peace and sang out in true joy
through intimacy with God’s Son entrusted to you and with Mary,
His tender Mother.
Assure those you protect that they do not labour alone.
Teach them to find Jesus near them
and to watch over Him faithfully as you have done. Amen

Thought for the Day – 1 May

The Foreshadowing of Saint Joseph

As the Church of Christ is prefigured in the rites and ceremonies of the Old Law, so the chief personages who centre round Our Lord in the redemption of the world are foreshadowed in the Old Testament.    We trace the outlines of Our Lady’s graces in Esther, Jahel, Bethsabee, Judith.    So, too, Saint Joseph’s place in the new dispensation is anticipated in the place of the patriarch Joseph at the court of Pharao.    Thus it is that God in His love for His chosen ones paves the way for them centuries before.    From the beginning He has prepared their work, and the throne they are to earn in heaven by their labors and sufferings for Him.

In the life of the patriarch Joseph there was throughout a correspondence to the life of the foster-father of Jesus Christ.    The troubles and persecutions of his early life; his long time of servitude and obscurity; his wondrous purity, his time of patient expectation; his glorious exaltation; his omnipotence with the king; his power to save all who came to him – all these were repeated, or rather were fulfilled, in Saint Joseph.    Reflect on each of these, and consider how Saint Joseph is a model to us.

We read of the patriarch, Joseph, that the king of Egypt made him lord of his house.    So God made Saint Joseph lord of that earthly tabernacle of flesh in which He dwelt on earth.    Joseph ruled Our Lord in His sacred humanity.    He made him lord, too, of another house in which He sojourned, of the sacred house that Wisdom built for Himself in the form of His holy Mother.    If Saint Joseph was thus lord of Jesus and Mary, what may we not expect from Him?   In our lives on the ‘narrow road’, on our way home, in our difficulties, in our labour and our toil!?

To capture the devotion to Saint Joseph within the Catholic liturgy, in 1870, Pope Pius IX declared Saint Joseph the patron of the universal Church. In 1955, Pope Pius XII added the feast of Saint Joseph the Worker.    This silent saint, who was given the noble task of caring and watching over the Virgin Mary and Jesus, now cares for and watches over the Church and models for all the dignity of human work.

“What emanates from the figure of Saint Joseph is faith.    Joseph of Nazareth is a “just man” because he totally “lives by faith.”     He is holy because his faith is truly heroic. Sacred Scripture says little of him.    It does not record even one word spoken by Joseph, the carpenter of Nazareth.    And yet, even without words, he shows the depth of his faith, his greatness.    Saint Joseph is a man of great spirit.    He is great in faith, not because he speaks his own words but above all because he listens to the words of the Living God.    He listens in silence.    And his heart ceaselessly perseveres in the readiness to accept the Truth contained in the word of the Living God.    We see how the word of the Living God penetrates deeply into the soul of that man, that just man.    And we, do we know how to listen to the word of God?    Do we know how to absorb it into the depths of our human personalities? Do we open our conscience in the presence of this word?”

St Joseph the Worker, Pray for us!

“He was chosen by the eternal Father as the trustworthy guardian and protector
of His greatest treasures, namely:  His divine Son and Mary, Joseph’s wife.
He carried out this vocation with complete fidelity until at last God called him, saying
‘Good and faithful servant, enter into the joy of your Lord.’

One Minute Reflection – 1 May

You shall set apart three cities…(where) a homicide may take
refuge …. to save his life when (he) unwittingly kills his neighbour………….Deuteronomy 19:2-4

REFLECTION – “Seek refuge in Mary because she is the city of refuge. We know that Moses set up three cities of refuge for anyone who inadvertently killed his neighbour.
Now the Lord has established a refuge of mercy – Mary – even for those who deliberately commit evil. Mary provides shelter and strength for the sinner.”……St Anthony of Padua

PRAYER – Lord Jesus, move me to take refuge in Your holy Mother if I am so unfortunate as to lose Your grace. Help me to flee to my city of refuge, for she will lead me to You. Mary, Mother of God, pray for us! Amen

The Holy Father’s PRAYER INTENTION for May 2017

That Christians in Africa, in imitation of the Merciful Jesus,
may give prophetic witness to reconciliation, justice and peace.

May the Month of Mary

The month of May is the “month which the piety of the faithful has especially dedicated to Our Blessed Lady” and it is the occasion for a “moving tribute of faith and love which Catholics in every part of the world pay to the Queen of Heaven.       During this month Christians, both in church and in the privacy of the home, offer up to Mary from their hearts an especially fervent and loving homage of prayer and veneration. In this month, too, the benefits of God’s mercy come down to us from her throne in greater abundance” (Paul VI: Encyclical on the Month of May, no. 1).

This Christian custom of dedicating the month of May to the Blessed Virgin arose at the end of the 13th century. In this way, the Church was able to Christianize the secular feasts which were wont to take place at that time. In the 16th century, books appeared and fostered this devotion.

The practice became especially popular among the members of the Jesuit Order — by 1700 it took hold among their students at the Roman College and a bit later it was publicly practiced in the Gesu Church in Rome. From there it spread to the whole Church.

The practice was granted a partial indulgence by Pius VII in 1815 and a plenary indulgence by Pius IX in 1859. With the complete revision of indulgences in 1966 and the decreased emphasis on specific indulgences, it no longer carries an indulgence; however it certainly falls within the category of the First General Grant of Indulgences. (A partial indulgence is granted to the faithful who, in the performance of their duties and in bearing the trials of life, raise their mind with humble confidence to God, adding — even if only mentally — some pious invocation.

Excerpted from Enchiridion of Indulgences.

The Month of Mary and the Popes 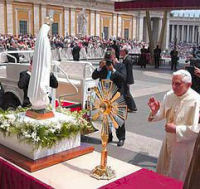 The pious practice of honoring Mary during the month of May has been especially recommended by the Popes. Pius XII made frequent reference to it and in his great Encyclical on the Sacred Liturgy (Mediator Dei) characterized it as one of “other exercises of piety which although not strictly belonging to the Sacred Liturgy, are nevertheless of special import and dignity, and may be considered in a certain way to be an addition to the liturgical cult: they have been approved and praised over and over again by the Apostolic See and by the Bishops” (no. 182).

Paul VI wrote a short encyclical in 1965 using the Month of Mary devotion as a means of obtaining prayers for peace.    He urged the faithful to make use of this practice which is “gladdening and consoling” and by which the Blessed Virgin Mary is honored and the Christian people are enriched with spiritual gifts” (no. 2).

In May of 2002 Pope John Paul II said, “Today we begin the month dedicated to Our Lady a favourite of popular devotion.   In accord with a long-standing tradition of devotion, parishes and families continue to make the month of May a ‘Marian’ month, celebrating it with many devout liturgical, catechetical and pastoral initiatives!”

“The Blessed Virgin Mary is the Mother of the Church and therefore the example, as well as the guide and inspiration, of everyone who, in and through the Church, seeks to be the servant of God and man and the obedient agent of the promptings of the Holy Spirit.

Wherever there is faith there is the example of Mary, because she lived by faith as the Scriptures remind us….

If, then, piety is the virtue which binds us to the sources of all life, to God, to our parents, to the Church, to Christ, certainly Christian piety binds us, in grateful love, to Mary — or our acceptance of Christ and of the mystery of our kinship with Him is imperfect, partial, and unfulfilled.”

Like Loading...
Our Morning Offering- 1 May
An Act of Consecration to the Blessed Virgin Mary
By St John Berchmans
Holy Mary, Mother of God and Virgin,
I choose you this day for my queen, patron and advocate
and firmly resolve and purpose never to abandon you,
never to say or do anything against you,
nor to permit that aught be done by others to dishonour you.
Receive me, then, I beg you,
as thy perpetual servant,
assist me in all my actions
and do not abandon me at the hour of my death. Amen

Saint of the Day – 1 May – St Joseph the Worker

St. Joseph has two feast days on the liturgical calendar.    The first is March 19—Joseph, the Husband of Mary. The second is May 1—Joseph, the Worker.

“Saint Joseph is a man of great spirit. He is great in faith, not because he speaks his own words but above all because he listens to the words of the Living God.   He listens in silence.  And his heart ceaselessly perseveres in the readiness to accept the Truth contained in the word of the Living God,”   Pope John Paul II had once said.

There is very little about the life of Joseph in Scripture but still, we know that he was the chaste husband of Mary, the foster father of Jesus, a carpenter and  a man who was not wealthy.    We also know that he came from the royal lineage of King David.

We can see from his actions in scripture that Joseph was a compassionate man and obedient to the will of God.    He also loved Mary and Jesus and wanted to protect and provide for them.

Since Joseph does not appear in Jesus’ public life, at his death, or resurrection, many historians believe Joseph had probably died before Jesus entered public ministry.

Joseph is the patron of many things, including the universal Church, fathers, the dying and social justice.