Thought for the Day – 1 May

The Foreshadowing of Saint Joseph

As the Church of Christ is prefigured in the rites and ceremonies of the Old Law, so the chief personages who centre round Our Lord in the redemption of the world are foreshadowed in the Old Testament.    We trace the outlines of Our Lady’s graces in Esther, Jahel, Bethsabee, Judith.    So, too, Saint Joseph’s place in the new dispensation is anticipated in the place of the patriarch Joseph at the court of Pharao.    Thus it is that God in His love for His chosen ones paves the way for them centuries before.    From the beginning He has prepared their work, and the throne they are to earn in heaven by their labors and sufferings for Him.

In the life of the patriarch Joseph there was throughout a correspondence to the life of the foster-father of Jesus Christ.    The troubles and persecutions of his early life; his long time of servitude and obscurity; his wondrous purity, his time of patient expectation; his glorious exaltation; his omnipotence with the king; his power to save all who came to him – all these were repeated, or rather were fulfilled, in Saint Joseph.    Reflect on each of these, and consider how Saint Joseph is a model to us.

We read of the patriarch, Joseph, that the king of Egypt made him lord of his house.    So God made Saint Joseph lord of that earthly tabernacle of flesh in which He dwelt on earth.    Joseph ruled Our Lord in His sacred humanity.    He made him lord, too, of another house in which He sojourned, of the sacred house that Wisdom built for Himself in the form of His holy Mother.    If Saint Joseph was thus lord of Jesus and Mary, what may we not expect from Him?   In our lives on the ‘narrow road’, on our way home, in our difficulties, in our labour and our toil!?

To capture the devotion to Saint Joseph within the Catholic liturgy, in 1870, Pope Pius IX declared Saint Joseph the patron of the universal Church. In 1955, Pope Pius XII added the feast of Saint Joseph the Worker.    This silent saint, who was given the noble task of caring and watching over the Virgin Mary and Jesus, now cares for and watches over the Church and models for all the dignity of human work.

“What emanates from the figure of Saint Joseph is faith.    Joseph of Nazareth is a “just man” because he totally “lives by faith.”     He is holy because his faith is truly heroic. Sacred Scripture says little of him.    It does not record even one word spoken by Joseph, the carpenter of Nazareth.    And yet, even without words, he shows the depth of his faith, his greatness.    Saint Joseph is a man of great spirit.    He is great in faith, not because he speaks his own words but above all because he listens to the words of the Living God.    He listens in silence.    And his heart ceaselessly perseveres in the readiness to accept the Truth contained in the word of the Living God.    We see how the word of the Living God penetrates deeply into the soul of that man, that just man.    And we, do we know how to listen to the word of God?    Do we know how to absorb it into the depths of our human personalities? Do we open our conscience in the presence of this word?”

St Joseph the Worker, Pray for us! 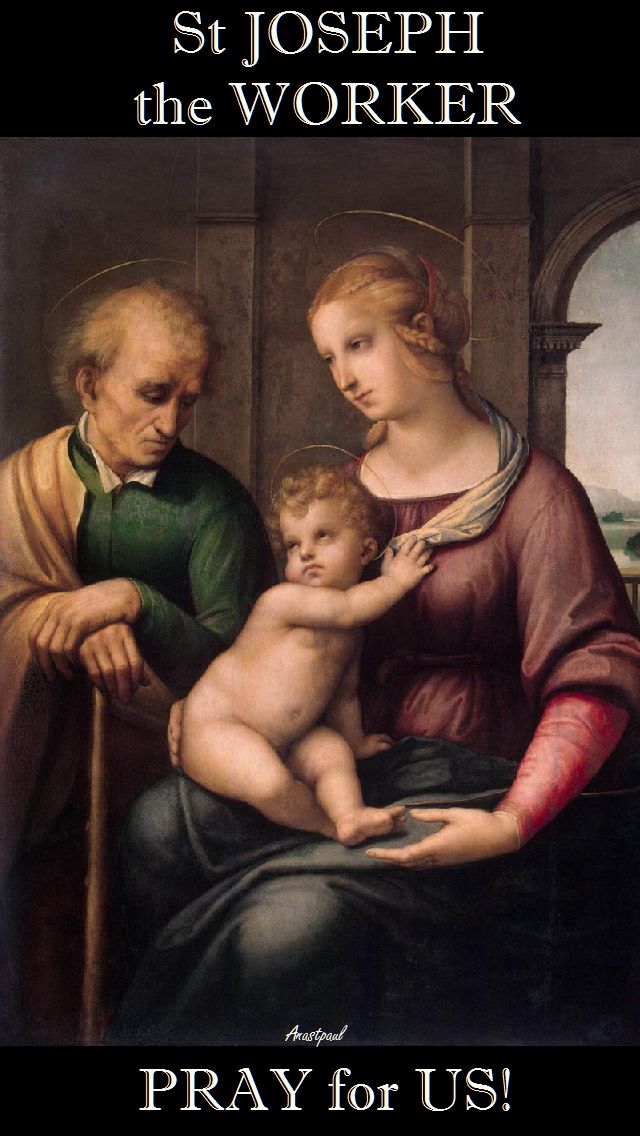