St Irenaeus was born during the first half of the 2nd century (the exact date is disputed: between the years 115 and 125 according to some, or 130 and 142 according to others), and he is thought to have been a Greek from Polycarp’s hometown of Smyrna in Asia Minor, now İzmir, Turkey.    Unlike many of his contemporaries, he was brought up in a Christian family rather than converting as an adult.

During the persecution of Marcus Aurelius, the Roman Emperor from 161–180, Irenaeus was a priest of the Church of Lyon.   The clergy of that city, many of whom were suffering imprisonment for the faith, sent him in 177 to Rome with a letter to Pope Eleuterus concerning the heresy Montanism and that occasion bore emphatic testimony to his merits.   While Irenaeus was in Rome, a massacre took place in Lyon.   Returning to Gaul, Irenaeus succeeded the martyr Saint Pothinus and became the second Bishop of Lyon.

The new bishop divided his activities between the duties of a pastor and of a missionary (as to which we have but brief data, late and not very certain), during the religious peace which followed the persecution of Marcus Aurelius.   Almost all his writings were directed against Gnosticism.   The most famous of these writings is Adversus haereses (Against Heresies).

St Irenaeus linked the Church at the time of the twelve apostles and the Church of the second century.   He wrote and taught the faith handed on by the apostles and preserved it when it was attacked.   His chief concern was unity among the churches.

The date of the death of Irenaeus is usually given as about the year 202/203.   According to a late tradition he suffered martyrdom under Septimius Severus. 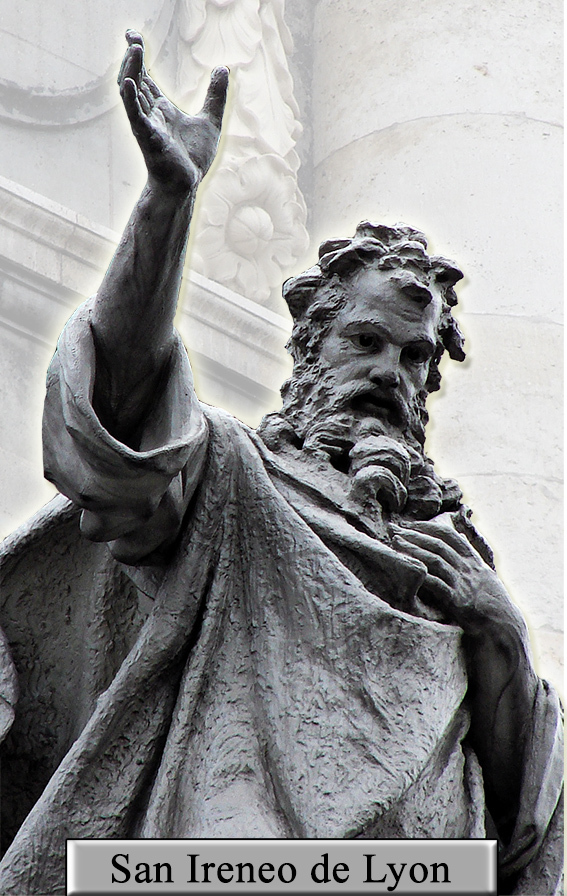