In the reign of Genseric the Arian King of the
Goths one of his favourite courtiers, the Count of
Armogasto, was converted from Arianism and joined
the Catholic Church.
The King on hearing of the fact fell into a
violent fury and calling the young nobleman to
his presence tried by every means in his power to
induce him to recant and return to the Arian sect.
Neither threats nor promises availed.  The Count
refused all overtures and held fast to his new
found faith.   Genseric then gave vent to his fury
and ordered the young man to be bound with
strong cords as tightly as the brawny executioners
could draw them.   The torment was intense but
the victim showed no sign of pain.   He repeated
two, or three times, Jesus. Jesus. Jesus, and lo!
the cords snapped like spiders’ webs and fell at his
feet.
Enraged beyond measure the tyrant now commanded
that the sinews of oxen, hard and tough as
wire, should be brought.   The Count was again
bound and the king bade the executioners use
their utmost strength.   Once more their victim
invoked the Name of Jesus and the new thongs,
like the old, snapped like threads.  Genseric
foaming with rage ordered the martyr to be bound
by the feet and hung from the branches of a tree,
head downwards.
Smiling at this new mode of torture Count
Armogasto folded his arms on his bosom and
repeating the Holy Name fell , into a tranquil
sleep as though he were lying on a soft and
comfortable couch.

D. Melchior smiles at his tormentors.

We have another incident of a similar kind
narrated of the Chinese Martyr, the Venerable
Dominican Bishop, D Melchior.
In one of the many persecutions which raged in
China and which gave so many saints to the
Church, this holy Bishop was seized and, after
having undergone the most brutal torments, was
condemned to a cruel death.
He was dragged to the market place in the
midst of a howling mob who came to gloat over
his sufferings.
They stripped him of his garments and five executioners,
armed with rough-edged swords, proceeded
to chop off his fingers one by one, joint by
joint, then his arms, then his legs, causing him
excruciating agony. Finally they hacked the flesh
from his poor body and broke his bones.
During this prolonged martyrdom no sign of
pain was visible on the Bishop’s countenance.
He was smiling and saying aloud, slowly, Jesus.
Jesus. Jesus, which gave him this wonderful
strength to the amazement of his executioners.
Neither cry nor groan escaped from his lips until
finally after hours of torture he quietly breathed
his last, with the same lovely smile lingering on
his face.
What wonderful consolation would we too not
feel, when confined to bed with sickness, or racked
by pain if we repeated devoutly the Name of Je sus.
Many people find it hard to sleep.
They will find help and consolation by invoking
in these sleepless moments the Holy Name, and
very probably will fall back into a tranquil slumber.

As German king and Holy Roman Emperor, Henry was a practical man of affairs.   He was energetic in consolidating his rule.   He crushed rebellions and feuds.   On all sides he had to deal with drawn-out disputes so as to protect his frontiers.   This involved him in a number of battles, especially in the south in Italy;  he also helped Pope Benedict VIII quell disturbances in Rome.   Always his ultimate purpose was to establish a stable peace in Europe.
According to eleventh-century custom, Henry took advantage of his position and appointed as bishops men loyal to him. In his case, however, he avoided the pitfalls of this practice and actually fostered the reform of ecclesiastical and monastic life.
All in all, this saint was a man of his times.   From our standpoint, he may have been too quick to do battle and too ready to use power to accomplish reforms.   But granted such limitations, he shows that holiness is possible in a busy secular life.   It is in doing our job that we become saints…………..Fr Don Miller, OFM

“Do not say,
this happened by chance,
while this came to be of itself.”
In all that exists’
there is nothing disorderly,
nothing indefinite,
nothing without purpose,
nothing by chance …
How many hairs are on your head?
God will not forget one of them.
Do you see how nothing,
even the smallest thing,
escapes the gaze of God?”
Saint Basil the Great (329-379)
Father & Doctor of the Church 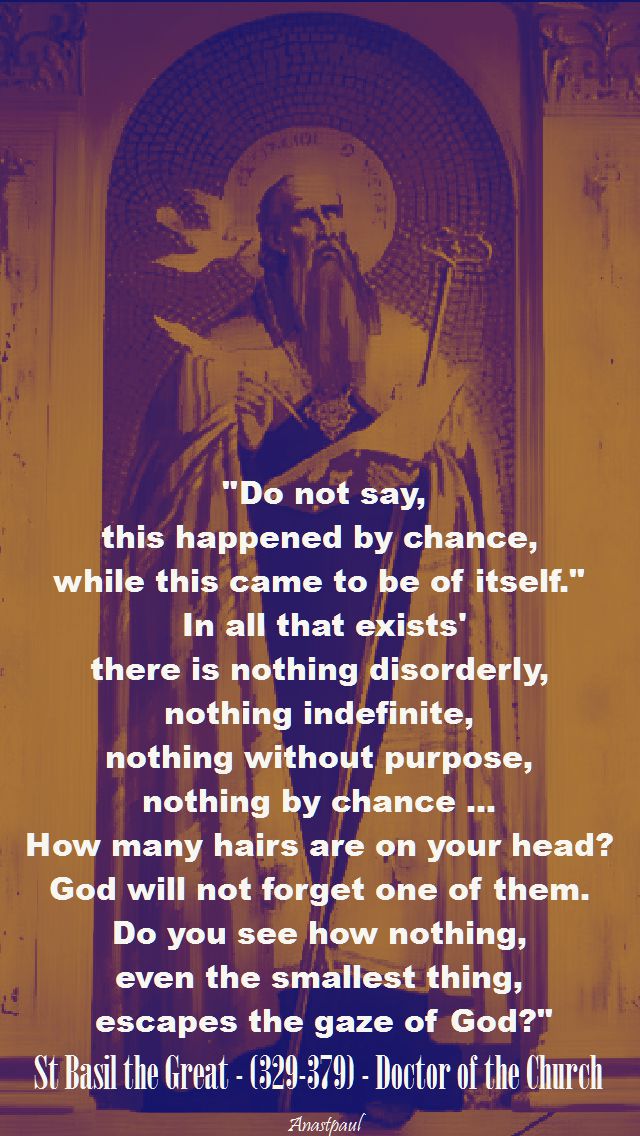 Not on bread alone is man to live but on every utterance that comes from the mouth of God………….Matthew 4:4 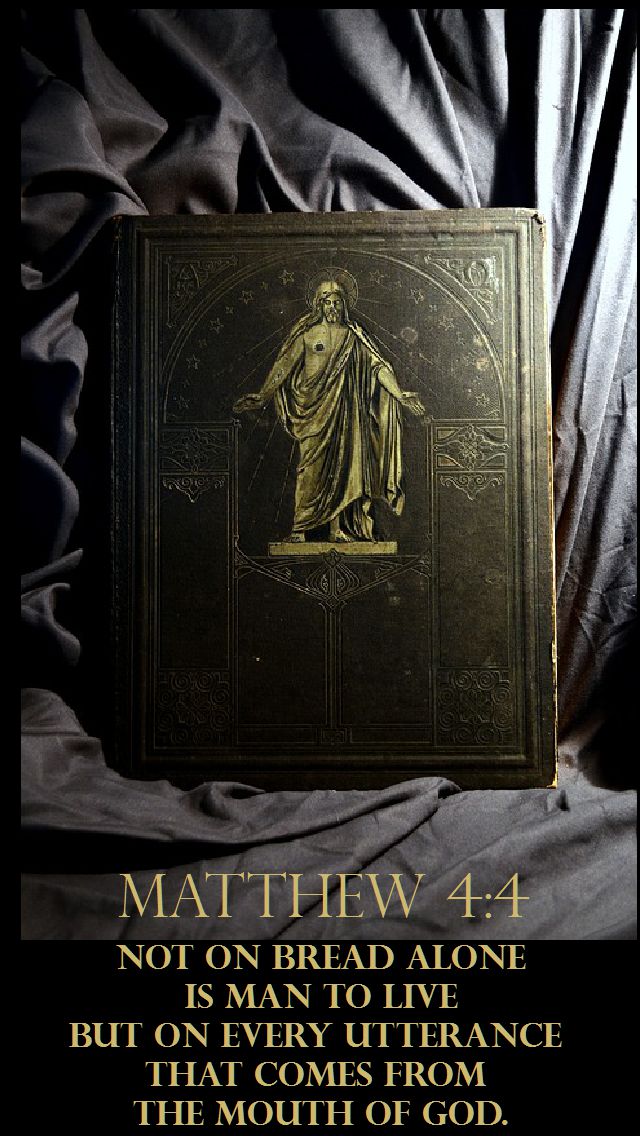 REFLECTION – “These are fountains of salvation that they who thirst may be satisfied with the living words they contain. In these is proclaimed the doctrine of godliness.  Let no man add to these, neither let him take out from these.”…….St Athanasius of Alexandria 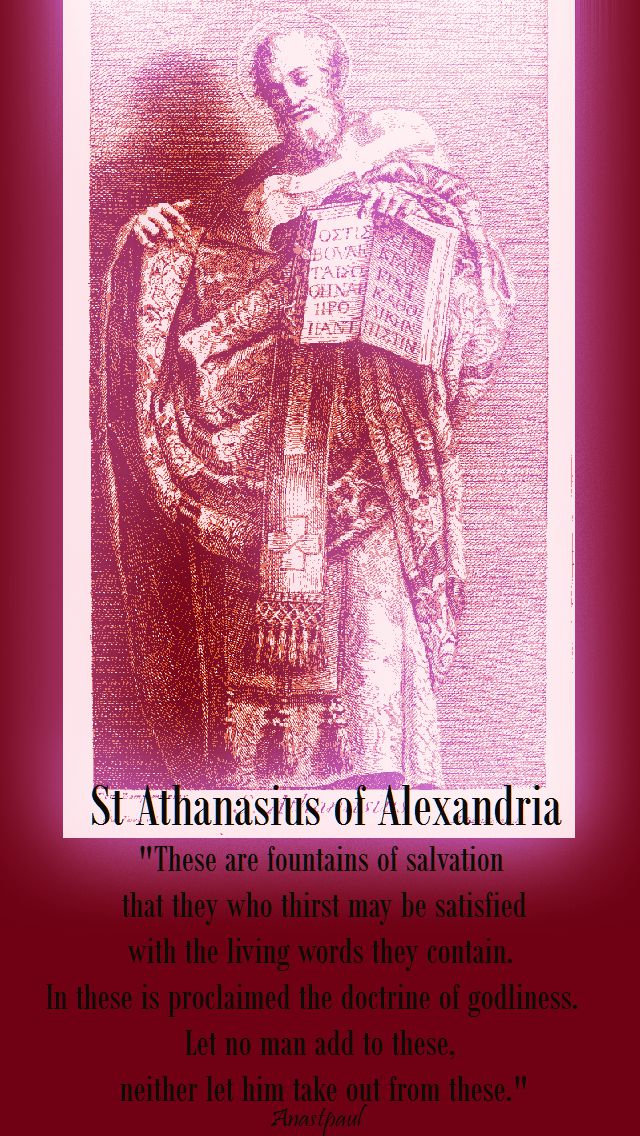 PRAYER – Heavenly Father, inspire me to meditate on Your holy words every day and fill me with Your Holy Spirit that I might not only understand them but be filled with the desire to follow and live their instructions.   May they be a consolation, a strength and an assistance on my journey to You.   St Henry – you were inspired and strove to live by the Holy Scriptures, please pray for us all, amen.

Prayer of St Aelred of Rievaulx

Behold me, O sweet Lord, behold me!
For I hope that in Your loving kindness,
O Most Merciful One,
You will behold me
either as a loving physician to heal,
a kind teacher to correct,
or an indulgent father to pardon…
confident in Your sweet powerful mercy
and most merciful power,
I ask in virtue of Your sweet Name
and of the mystery of Your sacred humanity,
that, mindful of Your kindness
and unmindful of my ingratitude,
You forgive me my sins
and heal the languors of my soul.
Amen

In the 10th century, leaders were not elected and so they did not have to worry about pleasing their subjects in order to stay in power.   Because of this, many emperors and kings took advantage of the power, luxury and honour of their position without responsibly working for the good of their people.   Kings often chose to ignore or to squelch conflict rather than to resolve it justly.   In the midst of these circumstances, Henry, the son of the Duke of Bavaria, set the example of a Christlike leader.   Jesus said that a leader is one who serves. And that is what Henry did.

Henry was married to Cunegunda of Luxembourg but they had no children.   When he was 34 years old, Henry became king of Germany.   As a ruler, Henry concentrated on the good of his people.   He built monasteries, helped the poor, fought against unjust seizure of power and relieved all kinds of oppression.

Once his brother-in-law and some other relatives complained that Henry was wasting the family fortune on the poor.   They actually got an army together to challenge Henry’s rule.   Henry met them on the battlefield and put down the uprising, then pardoned them out of Christian charity. 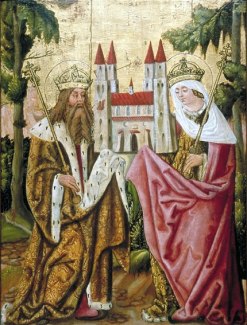 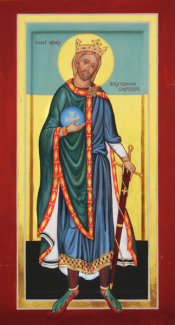 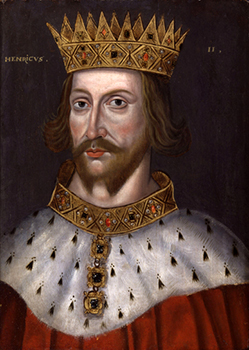 In 1014 Henry was crowned emperor of the Holy Roman Empire.   That title made him ruler of Germany, Austria, Switzerland, Belgium, Holland and northern Italy, as we know these countries today.   Henry was well known for his missionary spirit and for his protection of the Pope in times of trouble.   Henry ruled with a spirit of great humility and always sought to give the glory to God.   He used his position to promote the work of the Church and the peace and happiness of the people.   Henry is buried in the Cathedral of Bamberg beside his wife Cunegunda; he was canonised in 1146, and she was canonised in 1200.   The images below are Emperor Henry II’s Gospel and he and Empress Cunigunde’s tomb.

St Henry II (Optional Memorial)
Our Lady of Grace of Valsorda:  – Read about Our Lady of Valsorda here:  http://mariancalendar.org/madonna-delle-grazie-di-valsorda-/-our-lady-of-grace-of-valsorda-garessio-valsorda-italy/ 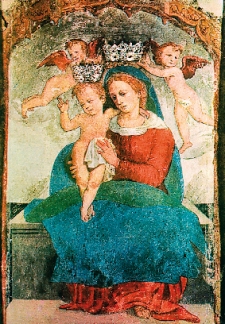 Our Lady of Soccorso/Our Lady of Help:  Read here:  http://wdtprs.com/blog/2012/03/beating-the-devil-the-madonna-del-soccorso/

Martyrs of Philomelio – 31 saints: 31 soldiers martyred for their faith in the persecutions of prefect Magno, date unknown. The only name that has come down to us is Alexander. In Philomelio, Phrygia (in modern Turkey).