In short, without the generous contribution of many women, the history of Christianity would have developed very differently.

As we can see, the praise refers to women in the course of the Church’s history and was expressed on behalf of the entire Ecclesial Community.   Let us also join in this appreciation, thanking the Lord because He leads His Church, generation after generation, availing Himself equally of men and women who are able to make their faith and Baptism fruitful for the good of the entire Ecclesial Body and for the greater glory of God….

“The story of Mary of Magdala reminds us all of a fundamental truth.   A disciple of Christ is one who, in the experience of human weakness, has had the humility to ask for His help, has been healed by Him and has set out following closely after Him, becoming a witness of the power of His merciful love that is stronger than sin and death………..”Pope BENEDICT XVI – General Audience, Paul VI Audience Hall – Wednesday, 14 February 2007

St Mary of Magdala, Pray for us!

“Fear not, for I have redeemed you;
I have called you by name, you are mine”

“Just as a woman had announced the words of death
to the first man, so also a woman was the first
to announce to the Apostles the words of life.”

The Doctrine of the Holy Name contd

The second meaning of the word Jesus is –
Jesus-dying-on-the-Cross for St. Paul tells us that our
Lord merited this most Holy Name by His sufferings
and death.
Therefore when we say Jesus we should also
wish to offer the Passion and Death of Our Lord
to the Eternal Father for His greater glory and
for our own intentions.
Just as Our Lord became man for each one of
us, as if that one were the only one in existence,
so He died not for all men in general but for
each one in particular.   When He was hanging
on the Cross He saw me, He saw you, dear reader, –

and offered every pang of dreadful agony, every
drop of His Precious Blood, all His humiliations,
all the insults and outrages for me, for you, for
each one of us.   He has given us all these infinite
merits as our very own.   We may offer them
hundreds and hundreds of times every day to
the Eternal Father for ourselves and for the WorId.
We do this every time we say Jesus.   At the
same time let us wish to thank Our Lord for all
He has suffered for us.
It is appalling that many Christians know so
little of this Holy Name and all that it means. As
a result they are losing every day precious graces
and forfeiting the greatest rewards in Heaven.
Sad, deplorable ignorance!

The third intention we ought to have when
saying Jesus is to offer all the Masses that are
being said all over the World for the glory of God,
for our own needs and for the World at large.
About 500.000+ Masses are celebrated daily.   And
we can and should share in all these.
The Mass is Jesus.  He once more becomes man,
renews the Incarnation in every Mass as really as
when He became man in His mother’s womb.  He
also dies on the Altar as really and truly as He
died on Calvary.   The Mass is said not only for
all those who assist at it in Church but for all those
who wish to hear it and offer it with the priests.
All we have to do is to say reverently Jesus.
Jesus with the intention of offering these Masses
and participating in them.   By doing this we have
a share in all of them.
It is a wonderful grace to assist at and to offer
one Mass;  what will it not be to offer and share in
500.000 Masses every day!
Therefore every time we say Jesus, let it
be our intention.
1. To offer to God all the infinite. love
and merits of the Incarnation.
2. To offer to God the Passion and Death
of Jesus Christ.
3. To offer to God all the 500.000
Masses being celebrated in the World
for His glory and our own intentions.
All that we have to do is to say the one word
Jesus but knowing what we are doing.

St Mechtilde was accustomed to offer the Passion
of Jesus in union with all the Masses of the
World for the souls in Purgatory.
Our Lord once showed her Purgatory open and
thousands of souls going up to Heaven as the
result of her little prayer.
When we say Jesus we can offer the Passion
and the Masses of the World either for ourselves
or for the souls in Purgatory or for any other
intention we please.
We should always. too, offer them for the World
at large and our own country in particular.

REFLECTION – “When Mary Magdalen came to the tomb and did not find the Lord’s body, she thought it had been taken away and so informed the disciples. After they came and saw the tomb, they too believed what Mary had told them. The text then says: “The disciples went back home,” and it adds: “but Mary wept and remained standing outside the tomb.” We should reflect on Mary’s attitude and the great love she felt for Christ; for though the disciples had left the tomb, she remained. She was still seeking the one she had not found and while she sought she wept; burning with the fire of love, she longed for Him who she thought had been taken away. And so it happened that the woman who stayed behind to seek Christ was the only one to see Him. For perseverance is essential to any good deed, as the voice of truth tell us: “Whoever perseveres to the end will be saved….Jesus says to her: Mary. Jesus is not recognised when He calls her “woman”; so He calls her by name, as though He were saying: ‘Recognise me as I recognise you; for I do not know you as I know others; I know you as yourself.’ And so Mary, once addressed by name, recognises who is speaking. She immediately calls Him ‘Rabboni’, that is to say, teacher, because the one whom she sought outwardly was the one who inwardly taught her to keep on searching.” – from a homily by St Pope Gregory the Great

PRAYER – Almighty, ever-living God, Your only-begotten Son, Jesus Christ made Mary of Magdala the first herald of Easter joy. Grant that, following her example and helped by her prayers, we may, in this life, proclaimn he living Christ and come to se Him reigning with You in glory. Through our Lord Jesus Christ, in unity with the Holy Spirit, one God for ever and ever, amen. 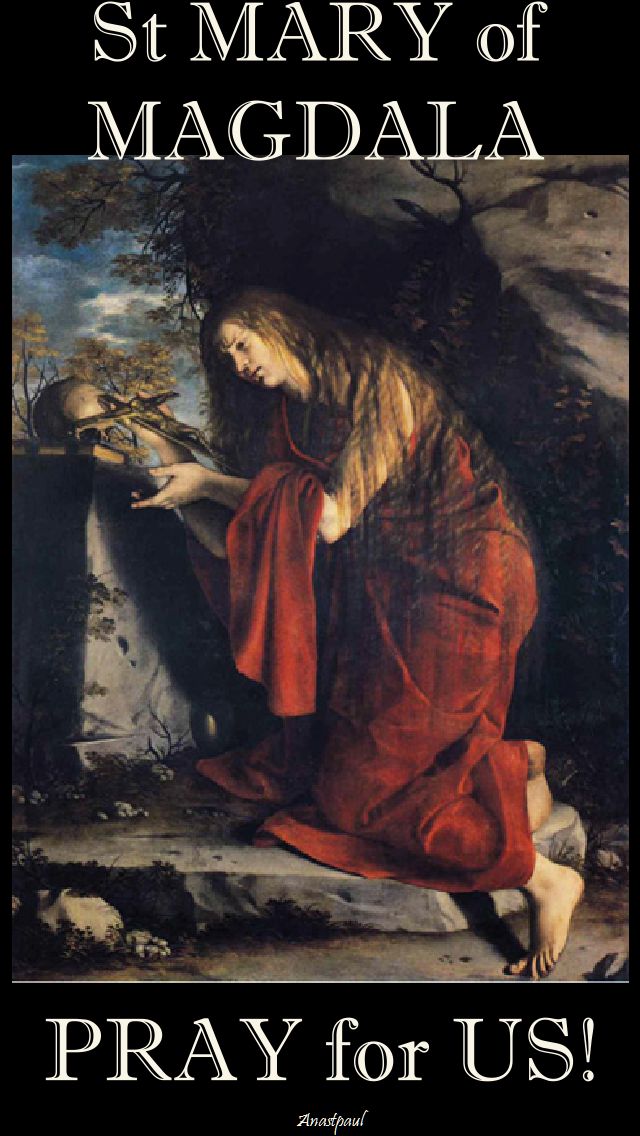 You are Christ
St Augustine

You are Christ,
my Holy Father,
my Tender God,
my Great King,
my Good Shepherd,
my Only Master,
my Best Helper,
my Most Beautiful
and my Beloved,
my Living Bread,
my Priest Forever,
my Leader to my Country,
my True Light,
my Holy Sweetness,
my Straight Way,
my Excellent Wisdom,
my Pure Simplicity,
my Peaceful Harmony,
my Entire Protection,
my Good Portion,
my Everlasting Salvation.
May the live coal of Your Love grow hot within my spirit
and break forth into a perfect fire;
may it burn incessantly on the altar of my heart;
may it glow in my innermost being;
may it blaze in hidden recesses of my soul;
and in the days of my consummation
may I be found consummated with You!
Amen.

Mary Magdalene was one of Christ’s disciples.   She has been identified with several Marys in the Gospel – Mary, the sister of Martha and Lazarus;  Mary, the sinner who washed Jesus’ feet with her tears;  Mary, a woman who cared for Jesus and his apostles on their journey.   Today scholars believe that Mary Magdalene was not the sinful woman in Scripture although she has been confused with this unnamed woman for centuries.   Except for the mother of Jesus, few women are more honoured in the Bible than Mary Magdalene.   Yet she could well be the patron of the slandered, since there has been a persistent legend in the Church that she is the unnamed sinful woman who anointed the feet of Jesus in Luke 7:36-50.

Most Scripture scholars today point out that there is no scriptural basis for confusing the two women.   Mary Magdalene, that is, “of Magdala,” was the one from whom Christ cast out “seven demons” (Luke 8:2)—an indication at the worst, of extreme demonic possession or possibly, severe illness.

Writing in the New Catholic Commentary, Father Wilfrid J Harrington, OP, says that “seven demons” “does not mean that Mary had lived an immoral life—a conclusion reached only by means of a mistaken identification with the anonymous woman of Luke 7:36.”   In the Jerome Biblical Commentary, Father Edward Mally, SJ, agrees that she “is not…the same as the sinner of Luke 7:37, despite the later Western romantic tradition about her.”

Mary Magdalene was one of the many “who were assisting them [Jesus and the Twelve] out of their means.”   She was not the sister of Martha and Lazarus!   She was one of those who stood by the Cross of Jesus with his mother.   And, of all the “official” witnesses who might have been chosen for the first awareness of the Resurrection, she was the one to whom that privilege was given.

Matthew, Mark, and John record that Mary of Magdala was present at the Crucifixion of Jesus and that she was among the women who visited the Tomb on Easter morning.   Luke mentions her presence only at the Tomb on Easter.    According to John, Mary was specially privileged to see and speak to the risen Lord on Easter morning.   She thought He was the gardener until he said her name. 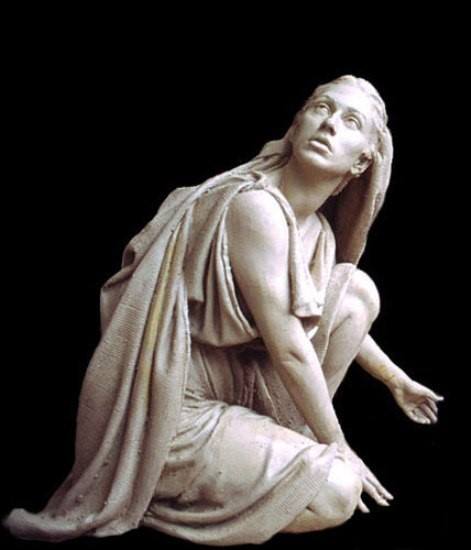 Mother of God of Koloch: The Koloch Icon of the Mother of God manifested itself in the year 1413 during the reign of Basil I, 15 miles from the city of Mozhaisk, in the vicinity of Koloch in the Smolensk governia. A peasant of this village by the name of Luke found the holy icon and took it to his home. One of his household was paralyzed. The sick one put his forehead to the icon with faith and received complete healing.
This became known through the surrounding area and many of the suffering began to flock to the wonderworking icon and they received help from the Mother of God. Luke afterwards took the icon to Mozhaisk and from there to Moscow. At the capital, Metropolitan Photius, together with a gathering of clergy and a multitude of the people, visited the holy icon. As the icon was carried through Moscow many of the sick were healed of their infirmities. Later they returned the icon to Mozhaisk.
At the place where the icon appeared, a church was built in honour of the Mother of God. Here the holy icon was housed. With the offerings of the peasant Luke and others, Prince Andrew Dimitrievich built a monastery on this site called the Kolochsk or Mozhaisk. 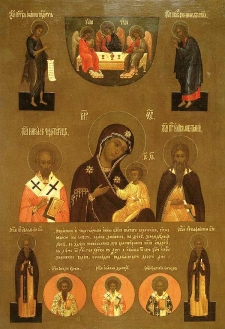 Martyrs of Massilitani: A group of Christians martyred together in northern Africa. Saint Augustine of Hippo wrote about them.