Thought for the Day – 20 July – Memorial of St Apollinaris

Following Jesus involves risks—sometimes the supreme risk of life itself.   Martyrs, like St Apollinaris, are people who would rather accept the risk of death than deny the cornerstone of their whole life:  faith in Jesus Christ.
Everyone will die eventually—the persecutors and those persecuted.
The question is what kind of a conscience people will bring before the Lord for judgment.   Remembering the witness of past and present martyrs can help us make the often small sacrifices that following Jesus today may require.
There are no patterns and the saints break all molds.
God is interested in us right where we are and our own particular circumstances are as good a place as any to be a saint.   Holiness is within our reach!

St Apollinaris and all you saints in heaven, pray for us! 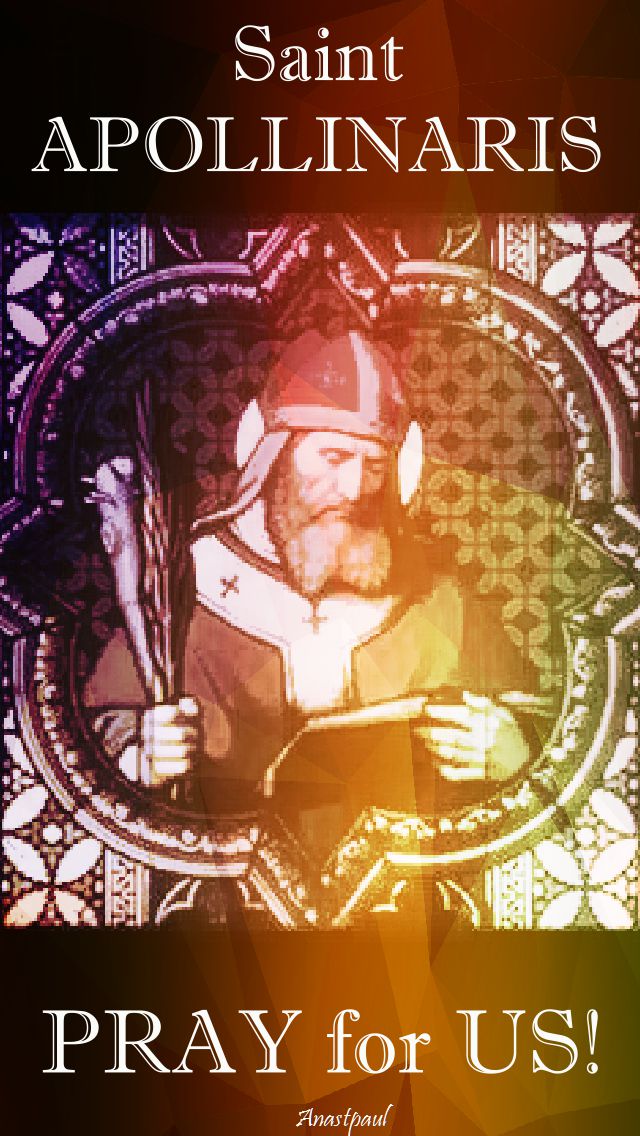 “Let sleep find you holding your Bible
and when you head nods let it be resting
on the sacred page.”
St Jerome (343-420) One of the Original 4 Doctors

“The Holy Bible is like a mirror before our mind’s eye.
In it we see our inner face.
From the Scriptures we can learn
our spiritual deformities and beauties.
And there too we discover the progress
we are making and how far we are from perfection.”
St Gregory the Great (540-604) One of the Original 4 Doctors 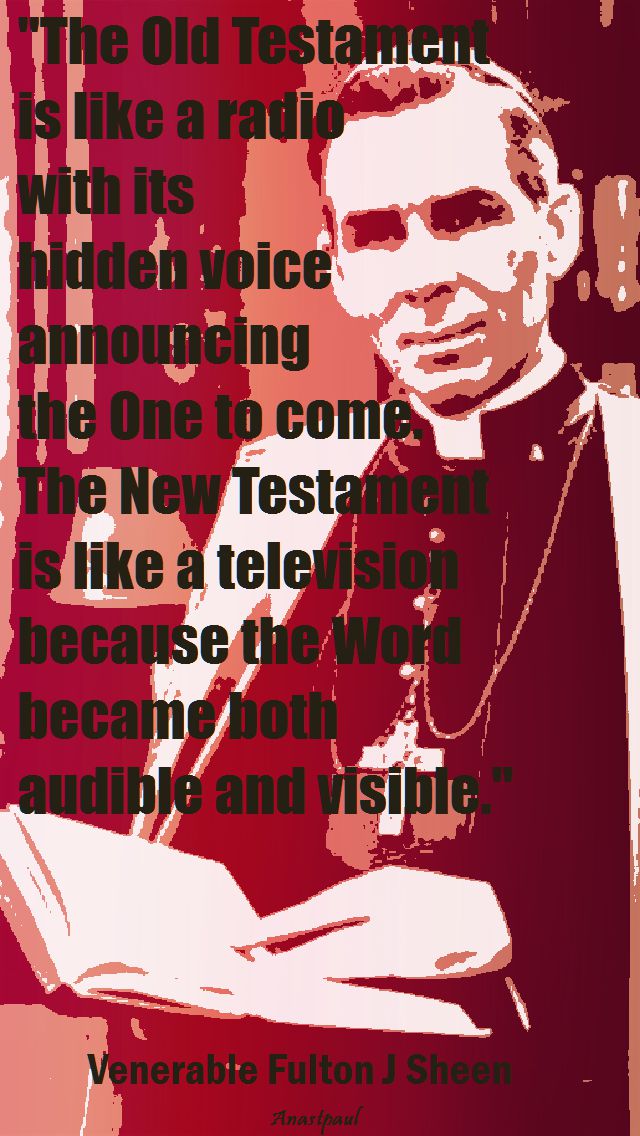 The Doctrine of the Holy Name:

We shall now explain the doctrine of the Holy
Name – the most important chapter in this booklet
– in order to show our readers whence comes
the power and the divine value of this Name and
how the Saints worked their wonders with it and
how we ourselves can obtain by its means every
grace and blessing.
You may ask, dear reader, how it is that one
word can work such prodigies?
I answer that with a word God made the World.
With His word He called out of nothing the Sun,
the Moon, the Stars, the high .Mountains and the
vast Oceans.   By His word He sustains the whole
Universe.
Does not the priest, too, in Holy Mass, work a
prodigy of prodigies, does He not transform the
little white host into the God of Heaven and
Earth by the words of Consecration and though
God alone can pardon sin, does not the priest also
in the confessional pardon the blackest sins and
the most awful crimes?
How? because God gives to His words this infinite
power.
So, too, God in His immense goodness gives to
each of us an all -powerful word with which
we can do wonders for Him, for ourselves and for
the World.   That word is Jesus.
Remember what St. Paul tells us about It.
That it is “a Name above all Names” and that:
“In the Name of Jesus every knee shall bend in
Heaven, on Earth and in Hell”.
But why?
Because Jesus signifies God-made-man – viz the
Incarnation.  When the Son of God became man
He was called Jesus so that when we say Jesus
we offer to the Eternal Father the infinite love,
the infinite merits of Jesus Christ, in a word, we
offer Him His own Divine Son Himself, we offer
Him the great mystery of the Incarnation.   Jesus
is the Incarnation.
How few Christians have any adequate idea of
this sublime mystery and yet it is the greatest
proof that God has given or could give us of His
personal love for us.   It is everything to us.

All scripture is inspired by God and is useful for teaching, for refutation, for correction and for training in righteousness,so that one who belongs to God may be competent, equipped for every good work……..2 Timothy 3:16-17

REFLECTION – “We therefore grossly deceive ourselves in not allotting more time to the study of divine truths. It is not enough barely to believe them and let our thoughts now and then glance upon them: that knowledge which shows us heaven, will not bring us to the possession of it and will deserve punishments, not rewards, if it remain slight, weak and superficial. By serious and frequent meditation it must be concocted, digested, and turned into the nourishment of our affections, before it can be powerful and operative enough to change them, and produce the necessary fruit in our lives. For this all the saints affected solitude and retreats from the noise and hurry of the world, as much as their circumstances allowed them.” – St. Apollinaris

PRAYER – Heavenly Father, St Apollinaris fought unto death for the law of his God. He was not afraid of the words of evil men, for he was like a house that is founded on rock. Grant that we too, may be founded on rock and be planted in good saoil to yield many fruits. St Apollinaris, please pray for us, amen.

O God, Creator of the universe,
who extends Your paternal concern
over every creature
and guides the events of history
to the goal of salvation,
we acknowledge Your fatherly love
when You break the resistance of mankind,
and, in a world torn by strife and discord,
You make us ready for reconciliation.
Renew for us the wonders of Your mercy;
send forth Your Spirit that He may work
in the intimacy of hearts,
that enemies may begin to dialogue,
that adversaries may shake hands and peoples
may encounter one another in harmony.
May all commit themselves
to the sincere search for true peace –
which will extinguish all arguments,
for charity -which overcomes hatred,
for pardon – which disarms revenge.
Amen 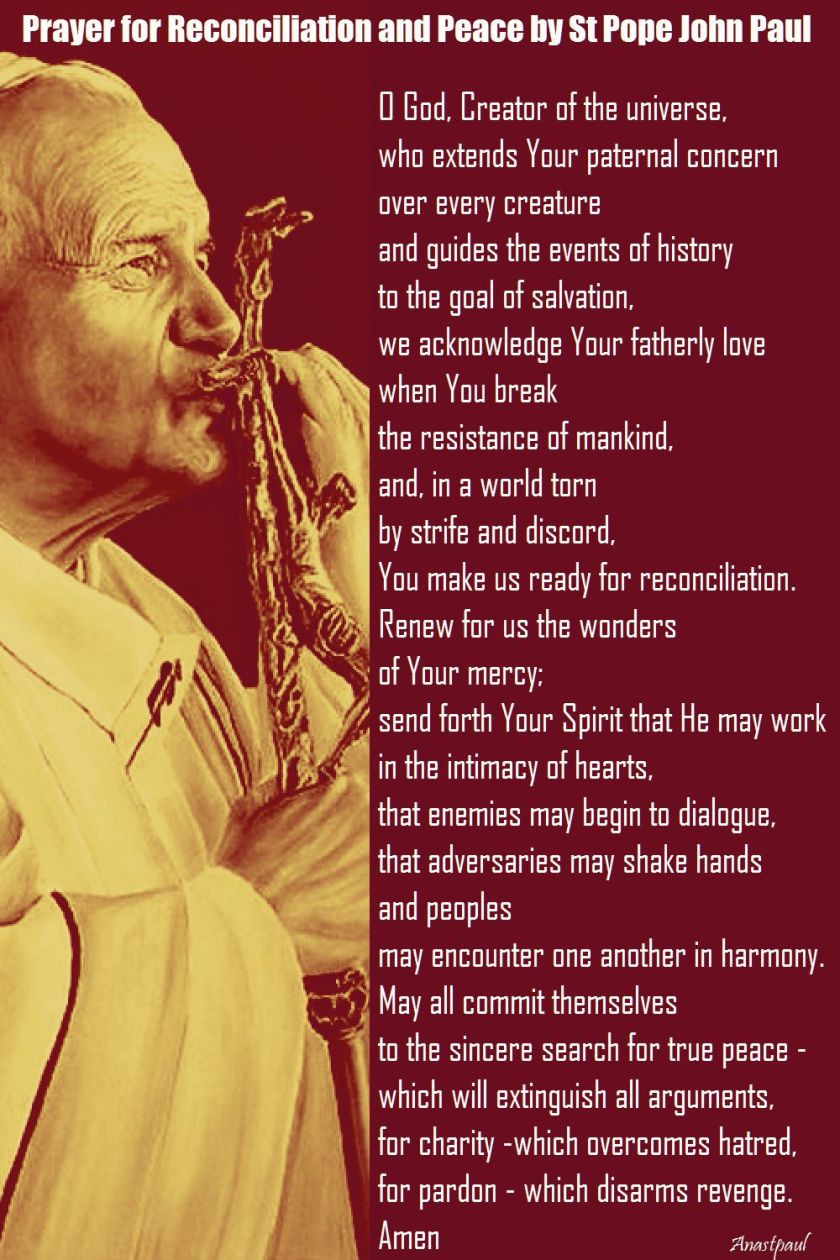 Saint of the Day – 20 July – St Apollinaris – Martyr and Bishop, Disciple of St Peter (born in Antioch, Turkey and was Martyred by being stabbed with a sword c 79 at Ravenna, Italy).   His relics are at the Benedictine abbey of Classe, Ravenna and in Saint Lambert’s church, Düsseldorf, Germany.   Patronage – epilepsy; gout, archdiocese of Ravenna-Cervia, Italy and 6 cities.  Attributes – bishop healing a boy’s eyes, sword.

St Apollinaris was a native of Antioch in Roman Province of Syria.   As the first Bishop of Ravenna, he faced nearly constant persecution.   He and his flock were exiled from Ravenna during the persecutions of Emperor Vespasian (or Nero, depending on the source).
He was made Bishop of Ravenna, Italy, by Saint Peter himself.   The miracles he wrought there soon attracted official attention, for they and his preaching won many converts to the Faith, while at the same time bringing upon him the fury of the idolaters, who beat him cruelly and drove him from the city.   He was found half-dead on the seashore and kept in concealment by the Christians but was captured again and compelled to walk on burning coals and a second time expelled.   But he remained in the vicinity and continued his work of evangelisation.   We find him then journeying in the Roman province of Aemilia [in Italy].   A third time he returned to Ravenna.   Again he was captured, hacked with knives, had scalding water poured over his wounds, was beaten in the mouth with stones because he persisted in preaching and was flung into a horrible dungeon, loaded with chains, to starve to death;  but after four days he was put on board a ship and sent to Greece.   There the same course of preachings, miracles and sufferings continued and when his very presence caused the oracles to be silent, he was, after a cruel beating, sent back to Italy.

All this continued for three years and a fourth time he returned to Ravenna.   By this time Vespasian was Emperor, and he, in answer to the complaints of the pagans, issued a decree of banishment against the Christians.   Apollinaris was kept concealed for some time but as he was passing out of the gates of the city, was set upon and savagely beaten and stabbed but he lived for seven days, foretelling meantime that the persecutions would increase but that the Church would ultimately triumph. 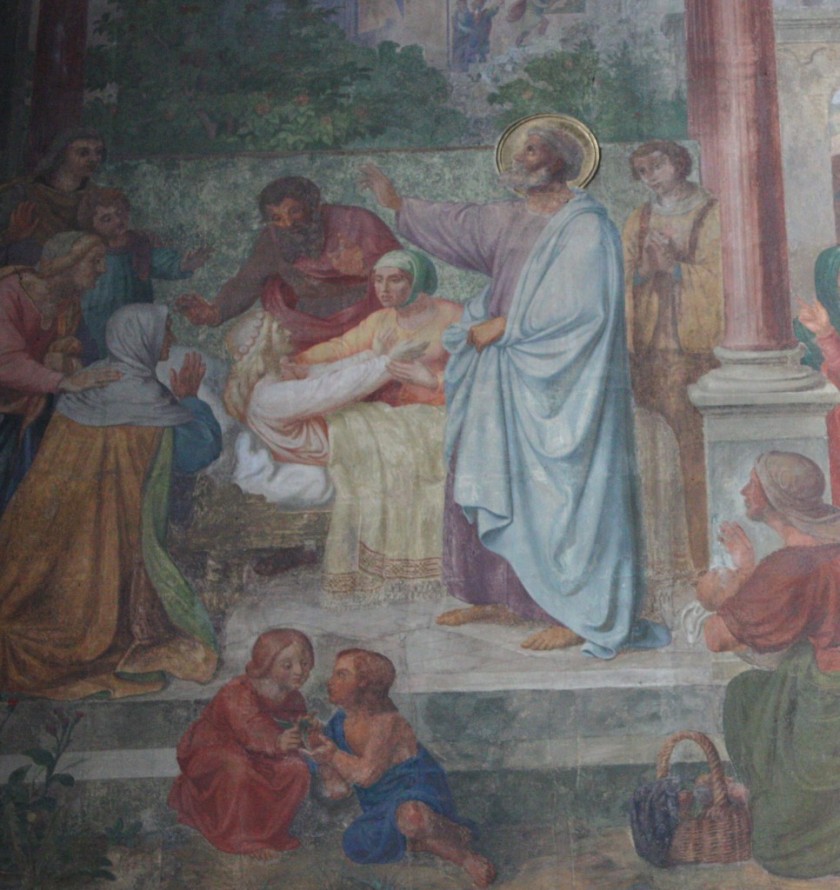 Martyrs of Damascus – 16 saints: 16 Christians who were martyred together. We know the names of six of then, but no details about any of them – Cassia, Julian, Macrobius, Maximus, Paul and Sabinus. They were martyred in Damascus, Syria, date unknown.

Martyrs of Zhaojia – 3 saints: Married lay woman and her two daughters in the apostolic vicariate of Southeastern Zhili, China. During the persecutions of the Boxer Rebellion, the three of them hid in a well to avoid being raped. They were found, dragged out, and killed for being Christian. Martyrs. They were – Maria Zhao Guoshi (mother), Maria Zhao and Rosa Zhao (sisters). They were martyred in late July 1900 in Zhaojia, Wuqiao, Hebei, China.

Martyrs of Zhujiahe – 4 saints: Two Jesuit missionary priests and two local lay people who supported their work who were martyred together in the Boxer Rebellion during and immediately after Mass.
• Léon-Ignace Mangin
• Maria Zhu Wushi
• Paul Denn
• Petrus Zhu Rixin
They were martyred on 20 July 1900 in church in Zhujiahe, Jingxian, Hebei, China and Canonised on 1 October 2000 by St Pope John Paul.