St Padre Pio you have said:

I am greatly comforted and very content in Jesus’ company and who could describe the help it is to me to have Him continually by my side? This company makes me much more careful not to do anything which would displease God. It seems to me as if Jesus is constantly watching me. If it sometimes happens that I lose the presence of God, I soon hear Our Lord calling me back to my duty. I cannot describe the voice He uses to call me back but I know that it is very penetrating and the soul who hears it finds it almost impossible to refuse what He asks.

Gracious God, You generously blessed Your servant, Padre Pio, with the gifts of the Spirit.
You marked his body with the five wounds of Christ Crucified,
as a powerful witness to the saving Passion and Death of Your Son
and as a stirring inspiration to many people of Your infinite mercy, forgiveness and love.
In the confessional, Padre Pio laboured endlessly for the salvation of souls.
Whenever You called, he answered,
serving Your people for the greater good of their souls
and for your Glory.
Through his powerful intercession, many who suffered were healed of sickness and disease.
Endowed with the gift of discernment, he could read people’s hearts.
With dignity and intense devotion, he celebrated daily Mass,
inviting countless men and women to a greater union with Jesus Christ,
in the Sacrament of the Holy Eucharist.
Through the intercession of Saint Pio,
we confidently beseech You to to grant us the grace of
………………. (state your petition here).
Help us to imitate his example of prayerful holiness and compassion,
so that we, too, may faithfully follow the Risen Lord
and one day rejoice in the Kingdom,
where You live and reign forever and ever. Amen 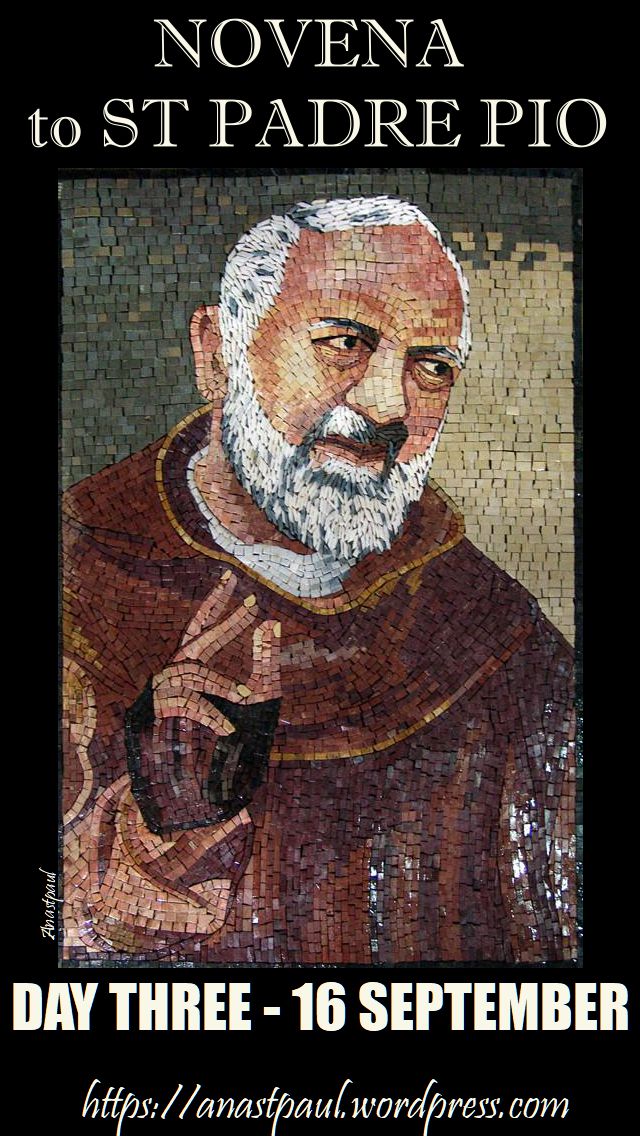 It seems fairly true to say that almost every possible false doctrine has been proposed at some time or other in the history of the Church.   Men like Cornelius and Cyprian were God’s instruments in helping the Church find a prudent path between extremes of rigorism and laxity.   They are part of the Church’s ever-living stream of tradition, ensuring the continuance of what was begun by Christ and evaluating new experiences through the wisdom and experience of those who have gone before.
Cornelius and Cyprian encouraged each other to lead virtuous, self-sacrificing and loving lives for God.    There is no greater gift that one friend can offer to another.    Today let us think of ways to help our friends grow closer to God.

Sts Cornelius and Cyprian, pray for us!

“You cannot have God for your Father if you do not have the Church for your mother…. God is one and Christ is one and His Church is one;  one is the faith and one is the people cemented together by harmony into the strong unity of a body….   If we are the heirs of Christ, let us abide in the peace of Christ;  if we are the sons of God, let us be lovers of peace.”…St Cyprian from The Unity of the Catholic Church 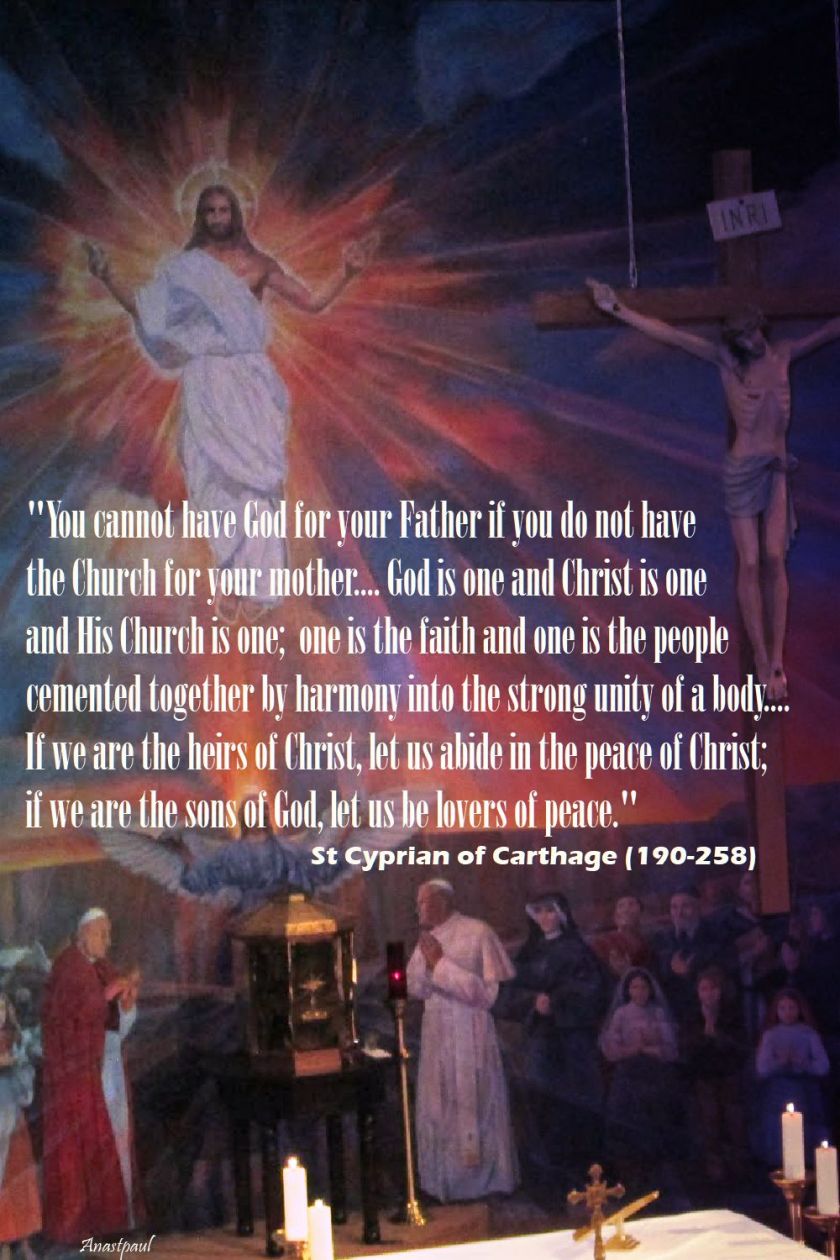 “Whatever a man prefers to God, that he makes a god to himself.”

“Let us remember one another in concord and unanimity.   Let us on both sides of death always pray for one another.   Let us relieve burdens and afflictions by mutual love, that if one of us, by the swiftness of divine condescension, shall go hence the first, our love may continue in the presence of the Lord and our prayers for our brethren and sisters not cease in the presence of the Father’s mercy.”…St Cyprian from letters (to St Pope Cornelius no 253) 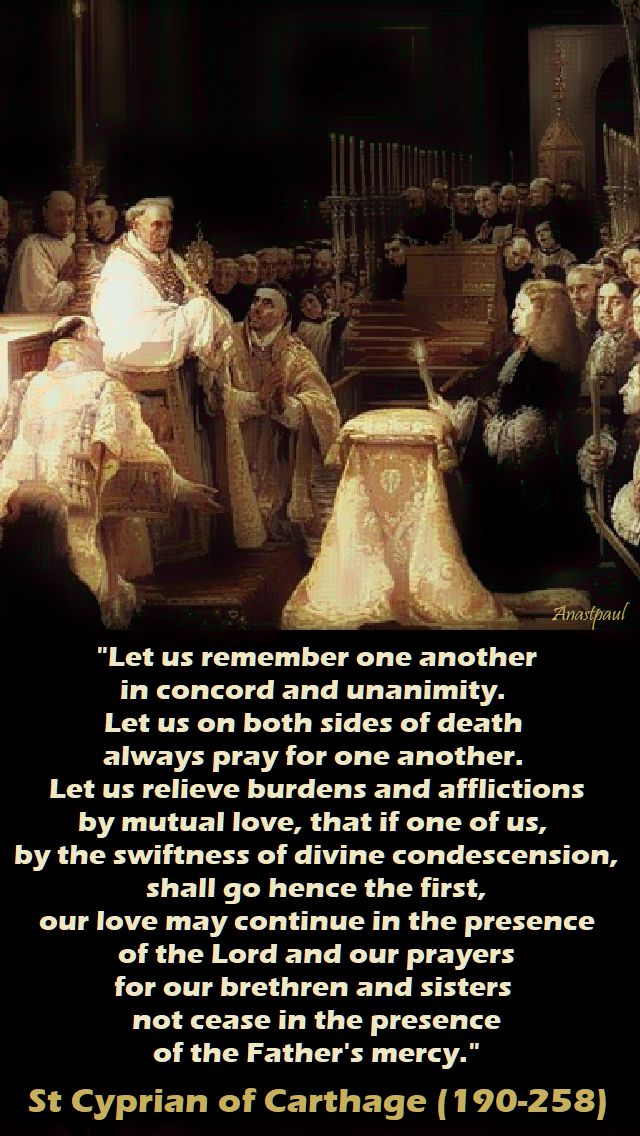 Your will be done on earth as it is in heaven…Matthew 6:10

REFLECTION – “We must carry out the will of God rather than our own.   This is what we pledge to do in the “Our Father”, which we recite every day.
What a travesty it would be if, after praying that God’s will be done, we should carry out that will halfheartedly and only because we are obliged to do so!…St Cyprian of Carthage

PRAYER – Lord God, heavenly Father, You gave Sts Cornelius and Cyprian to Your Church as faithful shepherds and steadfast martyrs.   Strengthen our faith and our courage by their prayers, so that we may strive with all our power, to do Your will at all times, wholeheartedly! Amen

MARY, LET ME LOVE YOUR JESUS

Saints of the Day – 16 September – St Pope Cornelius and St Cyprian of Carthage – Martyrs.  St Pope Cornelius – Papal Ascension:  251.  He was martyred in 253 and his remains were buried at the cemetery of Saint Callistus at Rome, Italy.   “Cornelous” means ‘battle horn’.   Patronages – • against earache; earache sufferers• epileptics; against epilepsy• against fever• against twitching• cattle• domestic animals• Kornelimünster, Germany. Attributes – • pope holding a battle horn or cow’s horn• pope with a cow nearby.   St Cornelius was a Bishop becoming ar reluctant 21st pope, elected after a year-and-a-half period during which the persecutions were so bad that papal ascension was a quick death sentence.   He worked to maintain unity in a time of schism and apostasy and fought Novatianism and called a synod of bishops to confirm him as rightful pontiff, as opposed to the anti-pope Novatian.  He had the support of Saint Cyprian of Carthage and Saint Dionysius.   He welcomed back those who had apostacised during the persecutions of Decius;   the documents that settled this matter prove the final authority of the Pope. Exiled to Centemcellae in 252 by Roman authorities to punish Christians in general, who were said to have provoked the gods to send plague against Rome. Martyr.   A document from Cornelius shows the size of the Church in Rome in his papacy:  46 priests, 7 deacons, 7 subdeacons, approximately 50,000 Christians.   His name is in the Communicantes in the Canon of the Mass.

St Cyprian of Carthage – (190 in Carthage, North Africa – Bishop and Martyr, learned Rhetoritician, Teacher, Writer, Theologian – beheaded 14 September 258 in Carthage, North Africa).   Patronages – • Algeria (proclaimed on 6 July 1914 by Pope Pius X)• North Africa (proclaimed on 6 July 1914 by Pope Pius X, on 10 January 1958 by Pope Pius XII and on 27 July 1962 by Pope John XXIII  NOTE – no, I don’t know why it was done so many times).   St Cyprian was born to wealthy pagan parents.   He taught rhetoric and literature.    He was adult convert in 246, taught the faith by Saint Caecilius of Carthage. He was ordained in 247 and became the Bishop of Carthage in 249.   During the persecution of Decius, beginning in 250, Cyprian lived in hiding, covertly ministering to his flock;  his enemies condemned him for being a coward and not standing up for his faith.   As a writer he was second only in importance to Tertullian as a Latin Father of the Church.   Friend of Saint Pontius.   St Cyprian was involved in the great argument over whether apostates should be readmitted to the Church;  Cyprian believed they should but under stringent conditions.   He was supported St Pope Cornelius against the anti-pope Novatian.   During the persecutions of Valerian he was exiled to Curubis in 257, brought back Carthage and then martyred in 258.   His name is in the Communicantes in the Canon of the Mass.

An excerpt written to Cornelius, bishop of Rome condemned to martyrdom for his faith, from his brother bishop Cyprian of Carthage, himself to give his witness as a martyr a few years later.  Read on the feasts of Sts. Cornelius and Cyprian, martyrs, on September 16.

Cyprian to his brother Cornelius.

My very dear brother, we have heard of the glorious witness given by your courageous faith.   On learning of the honour you had won by your witness, we were filled with such joy that we felt ourselves sharers and companions in your praiseworthy achievements. After all, we have the same Church, the same mind, the same unbroken harmony.   Why then should a priest not take pride in the praise given to a fellow priest as though it were given to him?   What brotherhood fails to rejoice in the happiness of its brothers wherever they are?

Words cannot express how great was the exultation and delight here when we heard of your good fortune and brave deeds:   how you stood out as leader of your brothers in their declaration of faith, while the leader’s confession was enhanced as they declared their faith.  You led the way to glory, but you gained many companions in that glory; being foremost in your readiness to bear witness on behalf of all, you prevailed on your people to become a single witness.

We cannot decide which we ought to praise, your own ready and unshaken faith or the love of your brothers who would not leave you.   While the courage of the bishop who thus led the way has been demonstrated, at the same time the unity of the brotherhood who followed has been manifested.   Since you have one heart and one voice, it is the Roman Church as a whole that has thus born witness.

Dearest brother bright and shining is the faith which the blessed Apostle praised in your community.   He foresaw in the spirit the praise your courage deserves and the strength that could not be broken;  he was heralding the future when he testified to your achievements; his praise of the fathers was a challenge to the sons.   Your unity, your strength have become shining examples of these virtues to the rest of the brethren.

Divine providence has now prepared us.  God’s merciful design has warned us that the day of our own struggle, our own contest, is at hand.   By that shared love which binds us close together, we are doing all we can to exhort our congregation, to give ourselves unceasingly to fastings, vigils and prayers in common.   These are the heavenly weapons which give us the strength to stand firm and endure;  they are the spiritual defenses, the God-given armaments that protect us.

Let us then remember one another, united in mind and heart.   Let us pray without ceasing, you for us, we for you;  by the love we share we shall thus relieve the strain of these great trials. 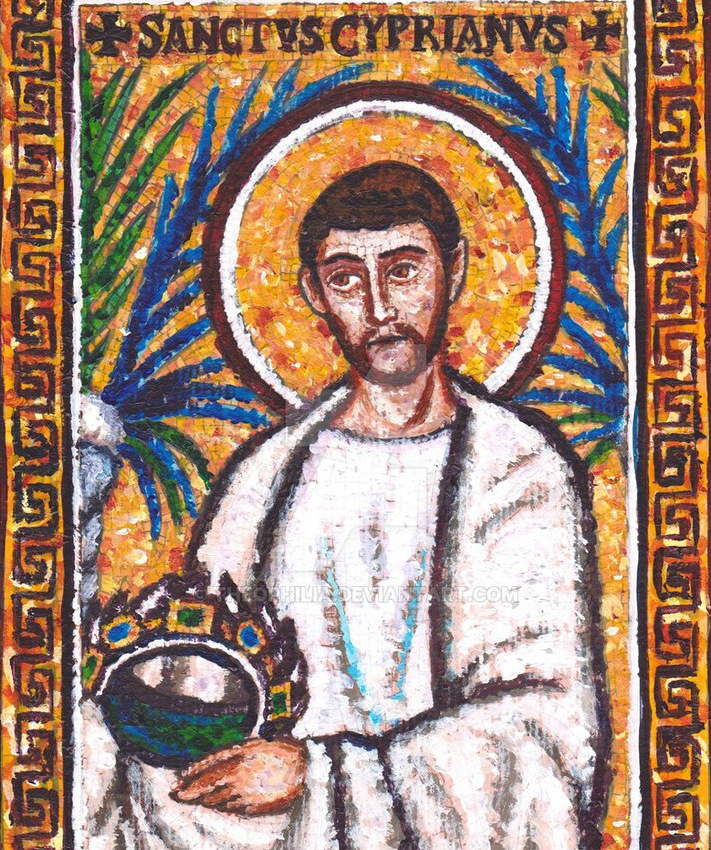