St Padre Pio you have said:

Is it possible that you are never satisfied with yourself?   Jesus loves you with a loving partiality in spite of all your unworthiness.  He sends down a torrent of graces upon you and yet you complain.   It is about time this ended and you convinced yourself that you are greatly in the Lord’s debt.   Hence, less complaints, more gratitude and a great deal of thanksgiving.   You ought to ask Our Lord for just one thing – to love Him.   All the rest should be thanksgiving.

Gracious God,
You generously blessed Your servant, Padre Pio, with the gifts of the Spirit.
You marked his body with the five wounds of Christ Crucified,
as a powerful witness to the saving Passion and Death of Your Son
and as a stirring inspiration to many people,
of Your infinite mercy, forgiveness and love.
In the confessional, Padre Pio laboured endlessly for the salvation of souls.
Through his powerful intercession,
many who suffered were healed of sickness and disease.
Endowed with the gift of discernment, he could read people’s hearts.
With dignity and intense devotion, he celebrated daily Mass,
inviting countless men and women to a greater union with Jesus Christ,
in the Sacrament of the Holy Eucharist.
His life was a celebration of love for You
and an oblation of himself in gratitude to You.
We pray that You will bless us too
with total love and thanksgiving.
Through the intercession of Saint Pio,
we confidently beseech You to to grant us the grace of
………………… (state your petition here).
Help us to imitate his example of prayerful holiness and compassion,
so that we, too, may faithfully follow the Risen Lord
and one day rejoice in the Kingdom,
where You live and reign forever and ever. Amen 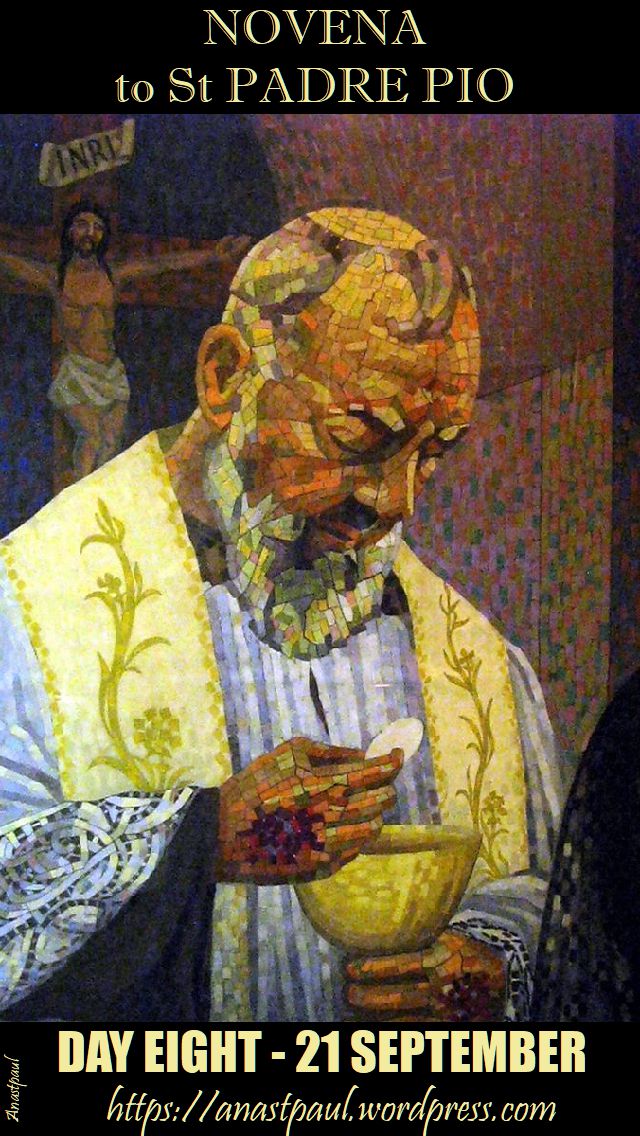 Thought for the day – 21 September – The Feast of St Matthew, Apostle and Evangelist –

Pope Francis and the Calling of St Matthew

In 1953, on the feast of Saint Matthew, the young Jorge Bergoglio (Pope Francis), at the age of 17, experienced, in a very special and intimate way, the loving presence of God in his life.   He went to confession and felt his heart touched by the mercy of God.  It changed his life.   At that moment, he also felt God’s call to the priesthood and religious life as a Jesuit.

In memory of that holy event in his life, Pope Francis chose as his episcopal (and later papal) motto the words “miserando atque eligendo” (“having mercy and choosing”). These words are found in a sentence in a homily by Saint Bede on the calling of Saint Matthew. They are read in the Office of Readings on the Feast of Saint Matthew.   Saint Bede wrote: “Jesus therefore sees the tax collector, and since He sees by having mercy and by choosing, He says to him, ‘Follow me.’”

To understand Pope Francis, it is helpful to know about this important event in his life on the Feast of Saint Matthew in 1953.   The young Jorge Bergoglio felt the tender gaze of God’s love, His mercy and his vocation.   In an interview, Pope Francis spoke of that event in these words:  “In that confession, something very rare happened to me. I don’t know what it was, but it changed my life.   I would say that I was caught with my guard down… It was a surprise, the astonishment of an encounter. I realized that God was waiting for me.   From that moment, for me, God has been the one who precedes (to guide me)… We want to meet Him but He meets us first.”

Just as Jesus had summoned Matthew to become His apostle, Jesus called the teenage Jorge Bergoglio to be His emissary.   Pope Francis once said:  “I believe in my history — which was pierced by God’s look of love, on September 21, the feast of Saint Matthew — He came to meet me and invited me to follow Him.”

That vocational encounter and piercing look of God’s merciful love has influenced Pope Francis’ life and ministry.   That’s why he chose the words of Saint Bede as his motto. Clearly, major themes of his papacy have been his teaching on divine mercy, the joyful encounter with Jesus and the infinite tenderness of God.

When he visited Rome prior to becoming Pope, Jorge Bergoglio always stayed in the neighbourhood of the Church of Saint Louis of France.  He would often go there to contemplate the famous painting of “The Calling of Saint Matthew” by Caravaggio.   In the painting, Jesus is pointing at Matthew.   Matthew is holding on to his money as if to say “No, not me! No, this money is mine.”   Pope Francis says he sees himself in Matthew – a sinner on whom the Lord turned His gaze.   He trusted in Christ’s infinite mercy and accepted His calling:  to become a Jesuit, a priest, a bishop, and pope.

May we always heed His call to be a Church which goes out, offering to all, especially the poor and suffering, the love and mercy of Jesus Christ!    May Saint Matthew pray for us.

Quote/s of the Day – 21 September – The Feast of St Matthew, Apostle and Evangelist

“On hearing Christ’s voice, we open the door to receive Him,
as it were, when we freely assent to His promptings
and when we give ourselves over to doing what must be done.
Christ, since He dwells in the hearts of His chosen ones
through the grace of His love, enters so that He might eat with us
and we with Him. He ever refreshes us by the light of His presence
insofar as we progress in our devotion to and longing for the things of heaven.
He Himself is delighted by such a pleasing banquet.” 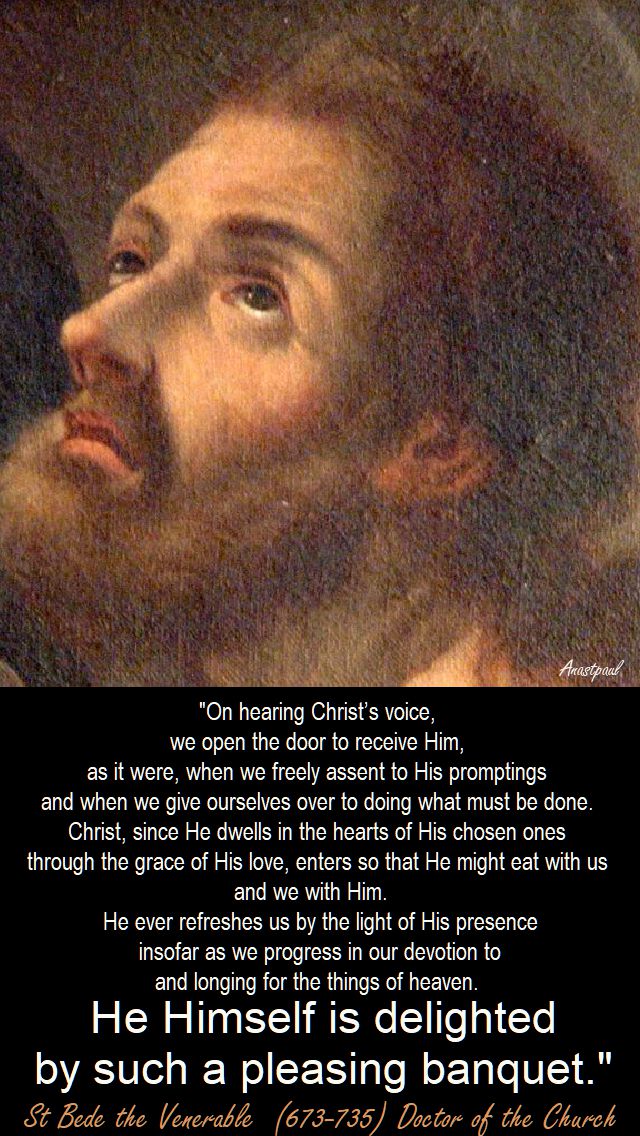 “That gaze overtook him completely, it changed his life.
We say he was converted. He Changed his life.
As soon as he felt that gaze in his heart, he got up and followed Him.
This is true: Jesus’ gaze always lifts us up.
It is a look that always lifts us up and never leaves you in your place,
never lets us down, never humiliates. It invites you to get up –
a look that brings you to grow, to move forward, that encourages you,
because the One who looks upon you loves you.
The gaze makes you feel that He loves you.
This gives the courage to follow Him: ‘and he got up and followed Him.'” 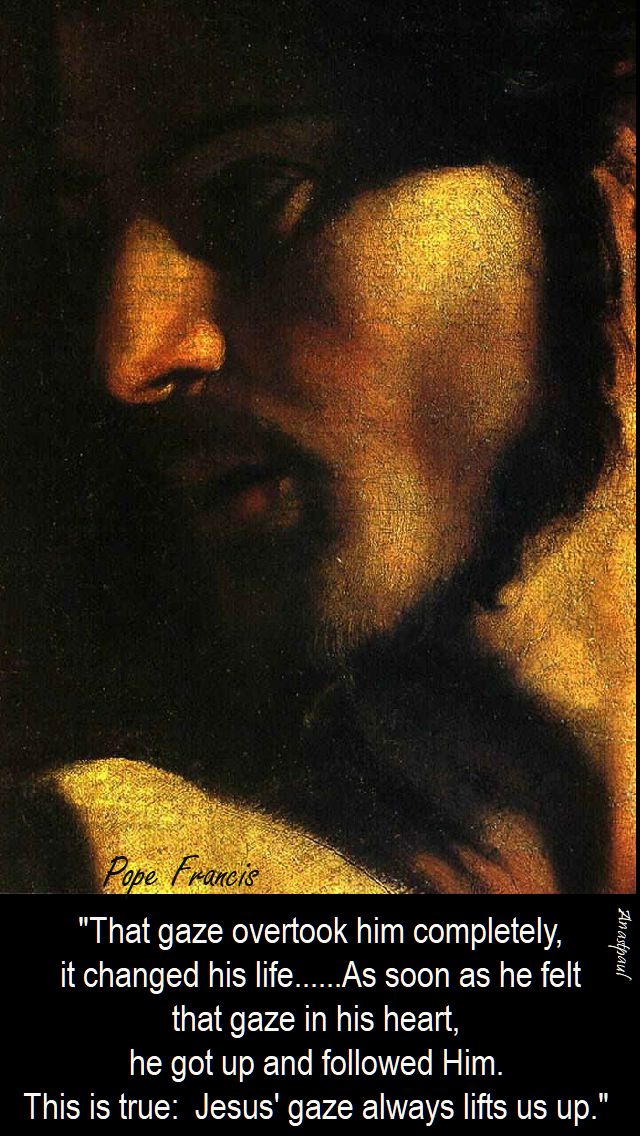 One Minute Reflection – 21 September – The Feast of St Matthew, Apostle and Evangelist

“Jesus saw a man called Matthew sitting at the tax office, and he said to him: Follow me.“…
Matthew 9:9

REFLECTION – “Jesus saw Matthew, not merely in the usual sense, but more significantly with His merciful understanding of men.”
He saw the tax collector and, because He saw him through the eyes of mercy and chose him, He said to him: “Follow me.”
This following meant imitating the pattern of His life – not just walking after Him.
Saint John tells us: “Whoever says he abides in Christ ought to walk in the same way in which he walked.”
“And he rose and followed him.”
There is no reason for surprise that the tax collector abandoned earthly wealth as soon as the Lord commanded him.
Nor should one be amazed that neglecting his wealth, he joined a band of men whose leader had, on Matthew’s assessment, no riches at all. Our Lord summoned Matthew by speaking to him in words.
By an invisible, interior impulse flooding his mind with the light of grace, He instructed him to walk in his footsteps.
In this way Matthew could understand that Christ, who was summoning him away from earthly possessions, had incorruptible treasures of heaven in His gift.” – from a homily by St Bede the Venerable (673-735) Doctor of the Church

PRAYER – Lord, You showed Your great mercy to Matthew the tax-gatherer,by calling him to become Your Apostle,supported by his prayer and example, may we always answer Your call and live in close union with You.
We make our prayer, in union with God our Father and the Holy Spirit, one God forever and ever.   St Matthew, Apostle of Christ, pray for us, amen.

Our Morning Offering – 21 September – The Feast of St Matthew, Apostle and Evangelist

We thank You, heavenly Father,
for the witness of Your apostle
and evangelist Matthew
to the Gospel of Your Son our Saviour
and we pray that, after his example,
we may with ready wills and hearts
obey the calling of our Lord to follow Him;
through Jesus Christ our Lord,
who lives and reigns with You and the Holy Spirit,
one God, now and forever. Amen 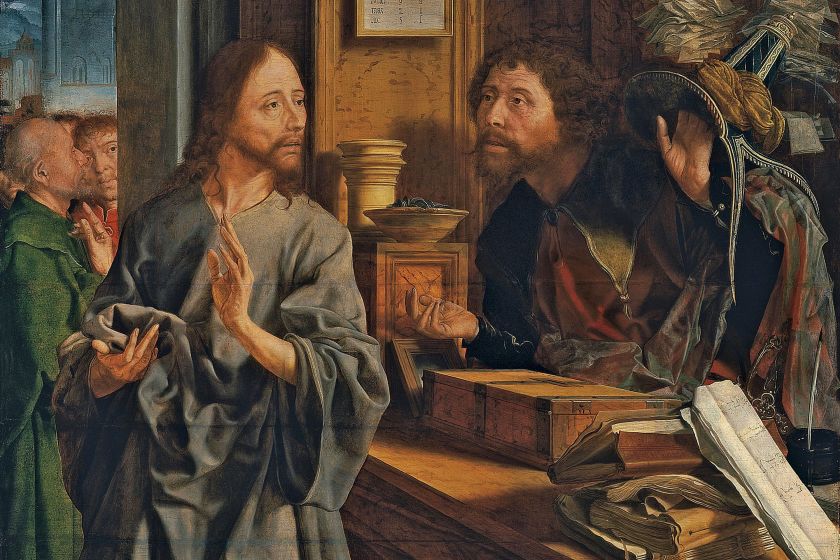 Saint Matthew, the first-century tax collector turned apostle who chronicled the life and ministry of Christ in his Gospel, is celebrated by the Church today, September 21. Although relatively little is known about the life of St Matthew, the account he wrote of Christ’s ministry – his Gospel was written in Aramaic, the language that our Lord Himself spoke and was written to convince the Jews that their anticipated Messiah had come in the person of Jesus.

The Gospel accounts of Mark and Luke, like Matthew’s own, describe the encounter between Jesus and Matthew under the surprising circumstances of Matthew’s tax-collecting duties.   Jewish publicans, who collected taxes on behalf of the Roman rulers of first-century Judea, were objects of scorn and even hatred among their own communities, since they worked on behalf of the occupying power and often earned their living by collecting more than the state’s due. 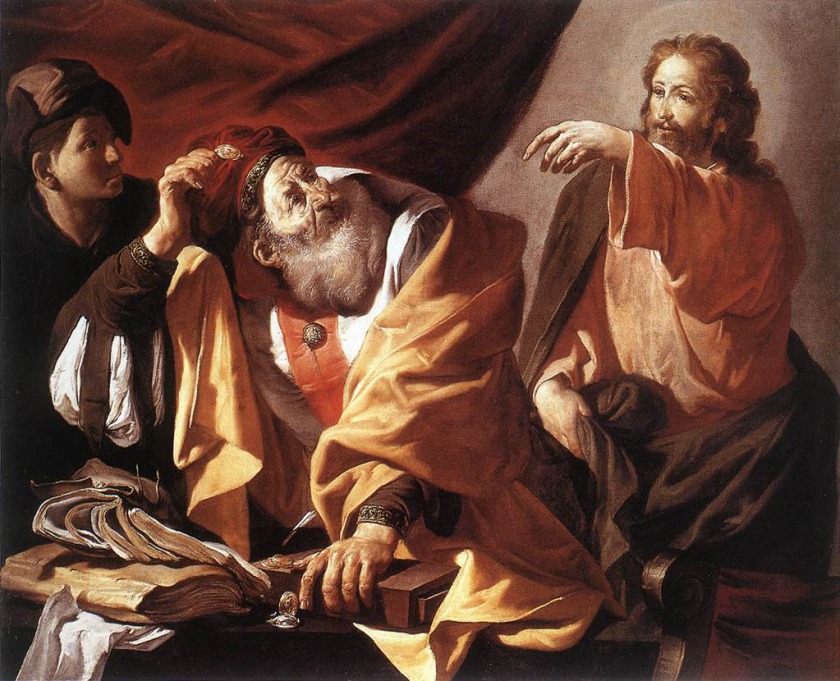 Jesus most likely first encountered Matthew near the house of Peter, in Capernaum near the Sea of Galilee.   The meeting of the two was dramatic, as Matthew’s third-person account in his Gospel captured:  “As Jesus passed on,” the ninth chapter recounts, “he saw a man named Matthew sitting at the customs post. He said to him, ‘Follow me’. And he got up and followed him.”

Matthew’s calling into Jesus’ inner circle was a dramatic gesture of the Messiah’s universal message and mission, causing some religious authorities of the Jewish community to wonder:  “Why does your teacher eat with tax collectors and sinners?” Jesus’ significant response indicated a central purpose of his ministry:  “I did not come to call the just but sinners.”

A witness to Christ’s resurrection after death, as well as his ascension into heaven and the events of Pentecost, Matthew also recorded Jesus’ instruction for the apostles to “go, therefore, and make disciples of all nations, baptizing them in the name of the Father, and of the Son, and of the holy Spirit, teaching them to observe all that I have commanded you.”

Like 11 of the 12 apostles, St. Matthew is traditionally thought to have died as a martyr while preaching the Gospel.   The Roman Martyrology describes his death as occurring in a territory near present-day Egypt.

Both the saint himself and his Gospel narrative, have inspired important works of religious art, ranging from the ornate illuminated pages of the Book of Kells in the ninth century, to the St Matthew Passion of J.S. Bach.   Three famous paintings of Caravaggio, depicting St. Matthew’s calling, inspiration and martyrdom, hang within the Contarelli Chapel in Rome’s Church of St Louis of the French.

Reflecting on St.Matthew’s calling, from the pursuit of dishonest financial gain to the heights of holiness and divine inspiration, Pope Benedict said in 2006 that “in the figure of Matthew, the Gospels present to us a true and proper paradox:  those who seem to be the farthest from holiness can even become a model of the acceptance of God’s mercy and offer a glimpse of its marvelous effects in their own lives.”