Presentation of the Blessed Virgin (Memorial): Commemorates the presentation of the Blessed Virgin as a child in the Temple where, according to tradition, she was educated.
The feast originated in the Orient probably about the 7th century and is found in the constitution of Manuel Comnenus (1166) as a recognised festival.   It was introduced into the Western Church in the 14th century, abolished by Pope Pius V but re-established by Pope Sixtus V in 1585. Its observance by the Society of the Sacred Heart of Jesus as the day of their origin led to the devotion of Mater Admirabilis.
Among the many masters who have represented this subject are: Alberti, Fra Bartolommeo, Biagio, Agostino, Carracci, Cima da Conegliano, Cossa, Holbein the Elder, Palma, Piombo, Tintoretto and Titian. 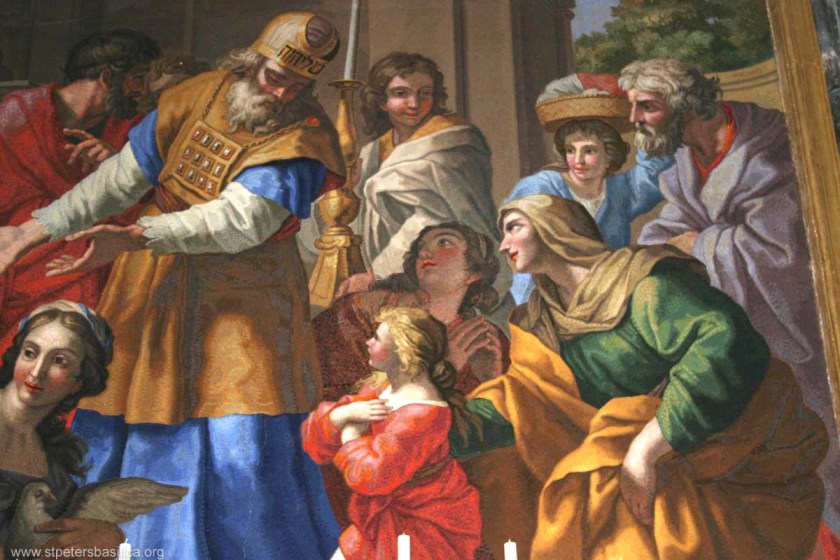 Our Lady of Quinche: Also known as
• La Pequeñita
• Virgen de Monte del Sol
• Virgin of the Rock
Devotion to the Blessed Virgin Mary in the image of a cedar statue in Quinche, Ecuador. About two foot tall, it was carved in 1586 by Don Diego de Robles, an artist who created many other images of Mary.   He carved it on order from the Lumbici Indians, who were unable to pay for it at delivery. Diego traded the statue to the Oyacachi Indians in exchange for a large load of cedar for future projects.
Legend says that the vision of Our Lady appeared in a cave to some of the Oyacachi, promising to the protect their children; the image Diego brought for trade looked just like the lady in the vision.   The Oyacachi asked Diego to stay and help them build a shrine for the statue; he declined and started home.   His horse threw him as they crossed a bridge and Diego was miraculously saved after he had prayed for Our Lady’s intervention;  he understood that this was a sign, went back to the Indian, and built an altar for the statue.
In 1604 the statue was moved to the local village of Quinche and a chapel was built for it. A new sanctuary was built in 1630 where the statue stayed until the church was destroyed in an earthquake in 1869.   The church was re-built and housed the image until moved to another new church in 1928; in 1985 the Vatican proclaimed the chapel to be a national sanctuary of Ecuador.   Many miracles, especially healings, have been associated with the image and there is a huge catalogue of songs in several languages that have been written in devotion over the centuries.
Patronage – Equador.

—
St Amelberga of Susteren
St Celsus the Martyr
St Clement the Martyr
St Demetrius of Ostia
St Digain
Bl Eoin O’Mulkern
St Pope Gelasius I
Bl Gelasius O’Cullenan
St Heliodorus of Pamphylia
St Hilary of Vulturno
St Honorius of Ostia
Bl Maria Franciszka Siedliska
St Maurus of Cesena
St Maurus of Porec
St Maurus of Verona
Bl Nicholas Giustiniani
St Rufus of Rome
—
Martyrs of Asta – 3 saints: Three Christians martyred together for their faith during the persecutions of Diocletian. The only details about them to survive are their names – Eutychius, Honorius and Stephen. They were martyred in c 300 at Asta, Andalusia, Spain.
—