The Solemnity of Our Lord Jesus Christ, King of the Universe – the last Sunday of the Liturgical Year – 26 November formerly referred to as “Christ the King,” was established by Pope Pius XI in 1925 as an antidote to secularism, a way of life which leaves God out of man’s thinking and living and organises his life as if God did not exist.  The feast is intended to proclaim in a striking and effective manner Christ’s royalty over individuals, families, society, governments and nations.

Today’s Mass establishes the titles for Christ’s royalty over men:  1) Christ is God, the Creator of the universe and hence wields a supreme power over all things – “All things were created by Him”;   2) Christ is our Redeemer, He purchased us by His precious Blood and made us His property and possession;  3) Christ is Head of the Church, “holding in all things the primacy”;  4) God bestowed upon Christ the nations of the world as His special possession and dominion.

Today’s Mass also describes the qualities of Christ’s kingdom.   This kingdom is:  1) supreme, extending not only to all people but also to their princes and kings;  2) universal, extending to all nations and to all places;  3) eternal, for “The Lord shall sit a King forever”;  4) spiritual, Christ’s “kingdom is not of this world.”

Christ the King as Represented in the Liturgy
The liturgy is an album in which every epoch of Church history immortalises itself. Therein, accordingly, can be found the various pictures of Christ beloved during succeeding centuries.   In its pages we see pictures of Jesus suffering and in agony; we see pictures of His Sacred Heart;  yet these pictures are not proper to the nature of the liturgy as such;  they resemble baroque altars in a gothic church.   Classic liturgy knows but one Christ:  the King, radiant, majestic, and divine.

With an ever-growing desire, all Advent awaits the “coming King”;  in the chants of the breviary we find repeated again and again the two expressions “King” and “is coming.” On Christmas the Church would greet, not the Child of Bethlehem, but the Rex Pacificus — “the King of peace gloriously reigning.”   Within a fortnight, there follows a feast which belongs to the greatest of the feasts of the Church year — the Epiphany.   As in ancient times oriental monarchs visited their principalities (theophany), so the divine King appears in His city, the Church;  from its sacred precincts He casts His glance over all the world….On the final feast of the Christmas cycle, the Presentation in the Temple, holy Church meets her royal Bridegroom with virginal love:  “Adorn your bridal chamber, O Sion and receive Christ your King!”   The burden of the Christmas cycle may be summed up in these words:  Christ the King establishes His Kingdom of light upon earth!

If we now consider the Easter cycle, the lustre of Christ’s royal dignity is indeed somewhat veiled by His sufferings;  nevertheless, it is not the suffering Jesus who is present to the eyes of the Church as much as Christ the royal Hero and Warrior who upon the battlefield of Golgotha struggles with the mighty and dies in triumph.   Even during Lent and Passiontide the Church acclaims her King.   The act of homage on Palm Sunday is intensely stirring;  singing psalms in festal procession we accompany our Savior singing:  Gloria, laus et honor tibi sit, Rex Christe, “Glory, praise and honour be to Thee, Christ, O King!”   It is true that on Good Friday the Church meditates upon the Man of Sorrows in agony upon the Cross but at the same time, and perhaps more so, she beholds Him as King upon a royal throne.   The hymn Vexilla Regis, “The royal banners forward go,” is the more perfect expression of the spirit from which the Good Friday liturgy has arisen.   Also characteristic is the verse from Psalm 95, Dicite in gentibus quia Dominus regnavit, to which the early Christians always added, a ligno, “Proclaim among the Gentiles:  the Lord reigns from upon the tree of the Cross!”   During Paschal time the Church is so occupied with her glorified Saviour and Conqueror that kingship references become rarer;  nevertheless, toward the end of the season we celebrate our King’s triumph after completing the work of redemption, His royal enthronement on Ascension Thursday.

Neither in the time after Pentecost is the picture of Christ as King wholly absent from the liturgy.   Corpus Christi is a royal festival: “Christ the King who rules the nations, come, let us adore” (Invit.).   In the Greek Church the feast of the Transfiguration is the principal solemnity in honour of Christ’s kingship, Summum Regem gloriae Christum adoremus (Invit.).   Finally at the sunset of the ecclesiastical year, the Church awaits with burning desire the return of the King of Majesty.

We will overlook further considerations in favour of a glance at the daily Offices.   How often do we not begin Matins with an act of royal homage:  “The King of apostles, of martyrs, of confessors, of virgins — come, let us adore” (Invit.).   Lauds is often introduced with Dominus regnavit, “The Lord is King”.   Christ as King is also a first consideration at the threshold of each day;  for morning after morning we renew our oath of fidelity at Prime:  “To the King of ages be honour and glory.”   Every oration is concluded through our Mediator Christ Jesus “who lives and reigns forever.”   Yes, age-old liturgy beholds Christ reigning as King in His basilica (etym.: “the king’s house”), upon the altar as His throne.

Excerpted from The Church’s Year of Grace, Pius Parsch

Come let us adore our King of all ages and all eternity! 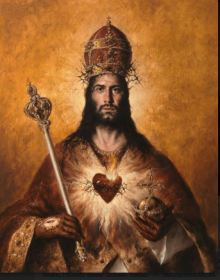 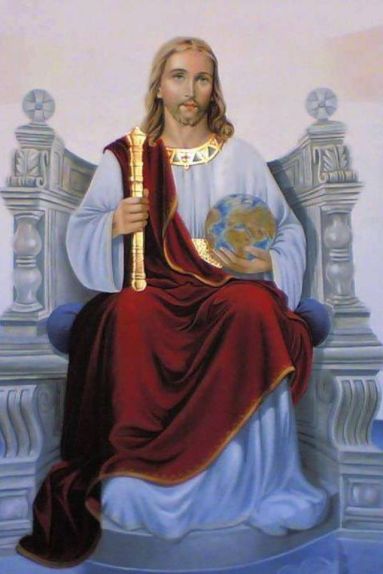 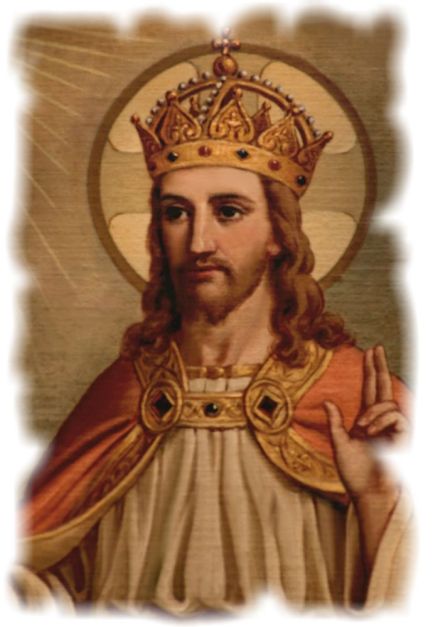 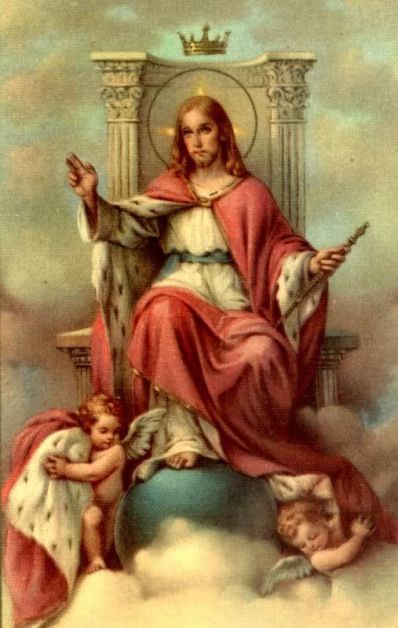