Saint of the Day – 19 January – Blessed Marcelo Spinola y Maestre (1835-1906) Cardinal – served as Archbishop of Seville, Founder of the Handmaids of the Divine Heart (Religious Sisters), Lawyer.   He was beatified on 29 March 1987 by St Pope John Paul II at Vatican City and his canonisation cause is still pending.   Blessed Marcelo was born 14 January 1835 on the Isle of San Fernando, diocese of Cadiz, Spain as Marcelo Rafael José María de los Dolores Hilario –  20 January 1906 at Seville, Spain of natural causes.   Patronage s – Archdiocese of Seville, Handmaids of the Divine Heart.   Attributes – Cardinal’s attire, Crucifix. 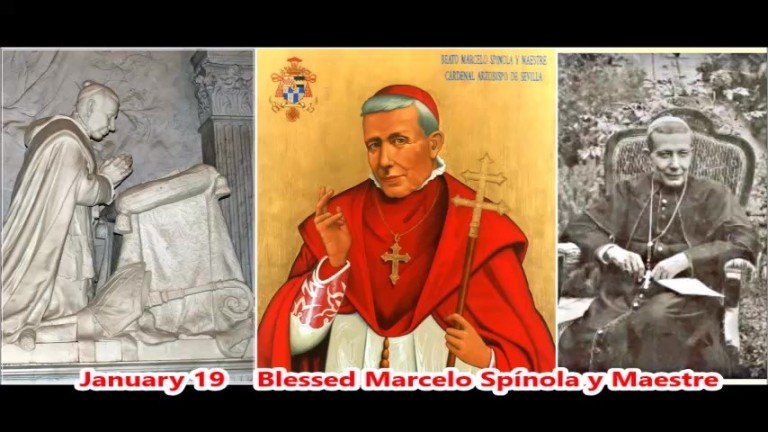 Marcelo Spínola was born on the island of San Fernando in Cádiz Province on 14 January 1835 at 06.00.   His parents were Juan Spínola y Osorno, Marquis of Spínola and Antonia Maestre y Osorno;  they had eight children, of whom four died in infancy.   He was baptised the following day in the military parish of San Fernando by the military chaplain of the second battalion of the Real Cuerpo de Artillería de la Marina.   His last name is also listed as Espínola.

He did his initial studies in the school of San Fernando, directed by priests from 1843-1845;  then at the Colegio Santo Tomás in Cádiz, 1845-1846 where he studied Latin, Spanish and French grammar and basic philosophy.   He then went to the school of Motril, where his father had been transferred from 1846-1847.   He went on to the school in Granada, 1847-1848, where he studied physics, chemistry and natural history.   His university education was completed at the University of Valencia from 1849-1852 and the University of Seville, graduating on the 29 June 1856.

He opened a law office in Huelva, offering free services to the poor.   He moved to Sanlúcar de Barrameda when his father was transferred to that city as chief of the port. He decided to follow his sacerdotal vocation on the advice of Canon Diego Herrero y Espinosa de los Monteros and began to study theology at home.   He received the ecclesiastical tonsure on 29 May 1863 and the diaconate on 20 February 1864.

He was ordained on 21 March 1864.   He did pastoral work in the archdiocese of Seville from 1864 in various parishes until 1880 and was then appointed titular bishop of Milos and auxiliary bishop of Seville by Pope Leo XIII on 16 December 1880.   He was transferred to the diocese of Coria on 10 November 1884 and to the diocese of Málaga on 10 June 1886.   Bl Marcelo was promoted to the metropolitan see of Seville on 2 December 1895 and he also served as a Senator of the Spanish Kingdom from 1891 to 1894 and from 1898 until his death. 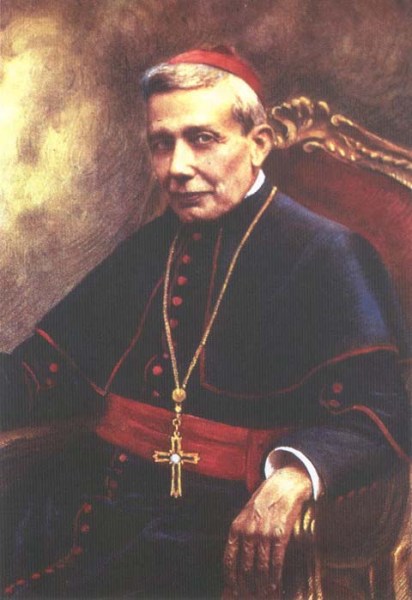 He was created a cardinal by Pope Pius X in the consistory of 11 December 1905.   He was made a Cardinal-Priest but with no title assigned to him but Blessed Marcelo died at noon on 20 January 1906 in Seville, prior to being officially installed as a Cardinal. 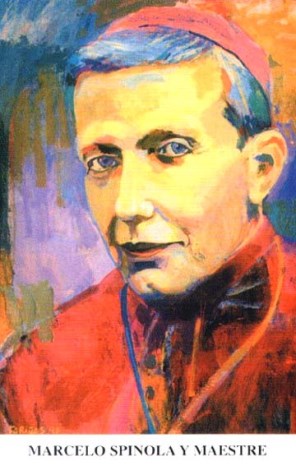 On 24 January 1913, his remains were transferred to a new mausoleum built in the chapel of Dolores in the Cathedral of Seville, the Seat of the Archbishop.   The statue below is situate in the Cathedral at the Shrine of Blessed Marcelo.

The cause of beatification commenced on 19 February 1956 under Pope Pius XII and began on a diocesan level in the Archdiocese of Seville.  The Positio – which documented his life of heroic virtue – was submitted to the Congregation for the Causes of Saints in 1978.   This culminated with the decree of heroic virtue on 24 September 1983 in which Pope John Paul II bestowed upon him the title of Venerable.   A miracle attributed to his intercession was investigated and ratified in 1985.   St John Paul II confirmed the miracle on 10 November 1986 and it led to his beatification on 29 March 1987.   Another miracle is at present under investigation.