Clelia Barbieri was born to Giacinta Nannetti and Giuseppe Barbieri, on 13 February 1847 in a village called “Budrie” of St Giovanni in Persiceto in the outskirts of Bologna, Italy and in the Archdiocese of Bologna.

Her parents were of different origins:  Giuseppe Barbieri came from perhaps the poorest family of “Budrie” while Giacinta from the most important family in town: he worked as servant for Giacinta’s uncle, the district’s medical doctor, while she was the daughter of the well-to-do Pietro Nannetti.   After her much-contested wedding, the wealthy Giacinta accepted the poverty of a labourer’s life and moved from a comfortable home to the humble cottage of her father-in-law, Sante Barbieri;  nevertheless forming a family built on the rock of faith and a totally Christian life.

In line with her mother’s expressed wish, she was baptised Clelia Rachele Maria on the very day of her birth.   Her mother taught Clelia to love God early in her life placing in her heart the desire for sanctity.   One day Clelia asked her, “Mother, how can I become a saint?”   In the meantime Clelia also learned the art of sewing, spinning and weaving kemp which was the most important work of the district.

In 1855, during a cholera epidemic the then eight-year-old Clelia lost her father and through the generosity of her uncle, the doctor, she, her mother and younger sister Ernestina moved into a more comfortable house near the parish church.   For Clelia the days became more saintly and dedicated.   Anyone who wanted to see her could always find her either at home weaving and sewing or in church praying.   Although it was usual at that time to receive First Communion almost at adulthood, Clelia due to her unusual catechistic preparation and spirituality, made hers on 17 June 1858, at only eleven years of age.   This was a decisive day for Clelia’s future since it was then that she had her first mystic experience:  exceptional contrition and repentance for her own sins and those of the world.   She underwent anguish and suffering for the sins that crucified Christ and for the sorrows of Our Lady.   From the day of her First Communion, the crucifix and Our Lady of Sorrows inspired her saintly soul.

At the same time she had a first inspiration as to her future which she perceived as based on prayer and good works.

In adoration before the Holy Tabernacle she was motionless, rapt in prayer, while at home she was the companion and model for the other working girls.   Far more mature than her years, she found in her work the first contact with the girls of “Budrie” where working hemp fibers was the main occupation and where all were engaged in this hard work.      Clelia brought something particularly personal to her little world, she worked with joy and love, praying and thinking of God at all times and even speaking of Him to her companions.

While Clelia was not Martha, (completely devoted to the cares of the world), yet she dedicated herself lovingly to the service of those most loved by Our Lord, the very poor, to the extent that her delicate hands were marked early in her short life with the hard labours she undertook.     While Clelia was not Mary who abandoned, excluded and neglected everything to prostrate herself in love and devotion, yet Clelia had no other thought, no other love than that for Our Lord whom she carried in her heart and soul as she walked with Him through life as if already in His world.    She lived in charity, completely dedicated to loving her fellowmen without restraint.   She forgot and even ignored her body.   She was happy to belong to the Lord and her happiness rested, in fact, in thinking only of Him.   Something, however, compelled her to turn towards her fellowmen, the poorest and most tried, who often waited in vain for some small sign of love and brotherhood.    A fervent faith burned inside her and she felt that she “must go” to give herself to all of God’s poor.   She loved that solitude which would permit her to reach God more fully but she left the protection of her home and went forth inspired by her all-consuming love for mankind.

At this time in history, there existed in the Church a group called “The Christian Catechism Workers” who were mainly men whose aim it was to combat the prevalent religious negligence of the times.   At “Budrie” the group was led by an elderly schoolteacher.  Clelia became one of the Christian Catechism Workers.    Then, at “Budrie” with her acceptance, the catechism group was reborn and attracted others with her very same dedication and faith.   At first, Clelia was admitted as an assistant teacher and was the least important member but soon her surprising talents and preparation evidenced themselves, so that the senior members placed themselves under her leadership.

Having rejected several flattering marriage proposals, the group of young ladies which had sprung up from the Catechism group, elected Clelia as their leader and conceived the idea of a community devoted to an apostolic and contemplative way of life.   This was to be a life of service which would spring from the Eucharist with daily Holy Communion and would ennoble itself with the teaching of catechism to the farmers and labourers of the area.     The idea could not become a reality immediately due to the political situation at the time of Italy’s unification (1866-67).   However, it was finally realised on 1 May 1868 when with the bureaucratic and local problems solved, Clelia and her young friends moved into the so-called “teacher’s house” where the Workers for Christian Catechism had formerly met.   This was the humble beginning of Clelia Barbieri’s religious family which later was to be named the religious community of the “Suore Minime dell’Addolorata”, Little Sisters of the Mother of Sorrows.   “Minime” because of Clelia’s devotion to the saint, Minimo Romito di Paola, St Francesco, patron and provident protector of the young community;   “dell’Addolorata” because this title of Our Lady of Sorrows was the most loved of all of Our Lady’s titles by Clelia Barbieri.

After moving into “the teacher’s house”, a series of extraordinary events in the form of assistance to the young community occurred which were undoubtedly the work of Divine Providence and without which the group could never have survived.   The small group was inspired by Clelia’s physical and moral sufferings in her darkest hours and in the absurd humiliations she endured at the hands of those who should have been more understanding.    However, her faith and devotion in prayer were always extraordinary.  In the small “Budrie” community there was faith, a desire for God and a missionary zeal full of creativity and imagination by no means based on any external support which was virtually nonexistent.     Clelia was the moving spirit.     The small initial group grew as well as the number of poor, sick and young boys and girls needing catechism and religious instruction. 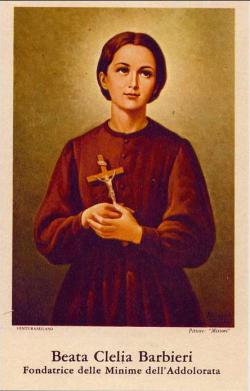 Slowly, the people began to see Clelia as a leader and teacher of the faith.   They started calling her “Mother” although she was only twenty-two years old.   They called her with this title until her death which came about very shortly.     The dormant tuberculosis she had always carried, suddenly flared up only two years after she had founded the order.

Clelia died prophesying to the sister at her bedside, “I’m leaving but I’ll never abandon you.   When in that alfalfa field next to the church there will be a new community house, I will no longer be with you … You will grow in number and you will expand over plains and mountains to work in the vineyard of the Lord.   The day will come when here at ‘Budrie’ many will arrive with carriages and horses …”    And she added, “I’m going to Heaven and all those who will die in our community will enjoy eternal life”. 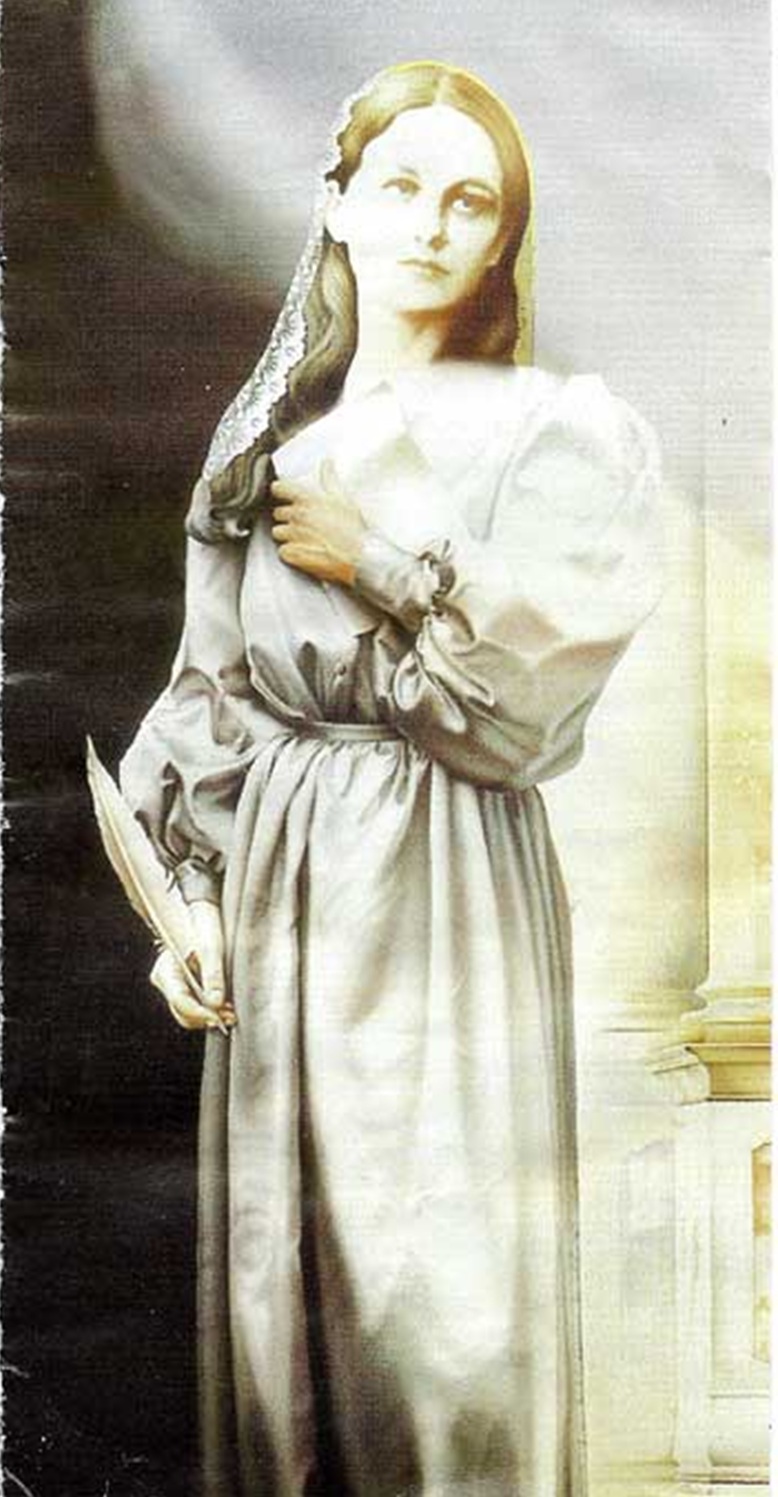 She died on 13 July 1870 with the happiness of one going to meet her Spouse and beloved Lord.   Clelia’s death prophecy has been fulfilled.

Her religious order has expanded and continues to grow.   It extends throughout Italy, in India and in Tanzania.   Today, the sisters following in Clelia’s footsteps, humbly continue their useful work of assistance to all in need and now number hundreds spread over thirty-five community houses.

Being only twenty three at the time of her death, Clelia Barbieri is the youngest founder of a religious community in the history of the Church.

She was Canonised at Rome on 9 April 1989 by St Pope John Paul II...vatican.va

Barbieri’s death soon resulted in an unusual and unexplained occurrence that has often been reported in the various parishes that she visited and in the houses in which her order is located at.   Her voice is often heard during scriptural readings and songs and this voice never speaks alone but is heard as part of a group.   People from various backgrounds have reported hearing the voice which is described to be unlike any they have ever heard.   The first reported occurrence happened in 1871 when the sisters of her congregation were in their usual evening meditation.