“The Divine Master calls the church the house of prayer.   In order to avoid irreverence and imperfections I exhort you in the Lord to:

Enter the church in silence and with great respect.   Take the holy water and make the sign of the cross carefully and slowly.

Before God in the Blessed Sacrament genuflect devoutly.   At your pace, kneel down and render to Jesus the tribute of you presence.

Confide to Him all your needs and those of others.   Speak to Him with filial abandonment.   Be very composed when standing up, kneeling down and sitting.

Carry out every religious act with the greatest devotion.   Be modest in your glance.   Don’t turn you head here and there to see who enters and leaves.

Don’t laugh.   Don’t speak to anybody, except when requested for charity or other strict necessity.

Say the words distinctly, observe the pauses and never hurry.   Behave in such a way that all those present are edified by you.

Don’t leave without asking Jesus for His blessing and forgiveness for your shortcomings. Leave the church recollected and calm.”

St Padre Pio, Pray for Us!

Miracles happened every day of Padre Pio’s life.   Like other wonder-workers such as Francis of Paola (1416-1507), Pio freely contradicted inviolable laws of nature.   He appeared in two places at the same time to help people in trouble.   He summoned friends by mental telepathy or by causing them to smell the scent of violets, which was associated with his presence.   He read people’s thoughts and used that special knowledge to tease them  . He dumbfounded people in the confessional by describing all their sins in detail.   He accurately predicted future events, including his own death.   He healed people of deafness, blindness and incurable diseases.   And for fifty years he bore Christ’s wounds on his body and suffered enormously because of them.

How do we understand the appearance of such a “medieval” figure in our contemporary world?   Perhaps we should not be surprised that God acts dramatically to get our attention when we lose sight of spiritual realities.   God sent Padre Pio to us as a light to challenge the darkness of the mid-twentieth century and to offer hope to a world racked by depression and war.

St Padre Pio, Pray for Us!

“Do not fear!   Jesus is more powerful than all hell.”

“Do not be daunted by the cross.
The surest test of love consists in suffering for the loved one
and if God suffered so much for love,
the pain we suffer for Him becomes as lovable as love itself.”

“The greater your sufferings, the greater God’s love for you.” 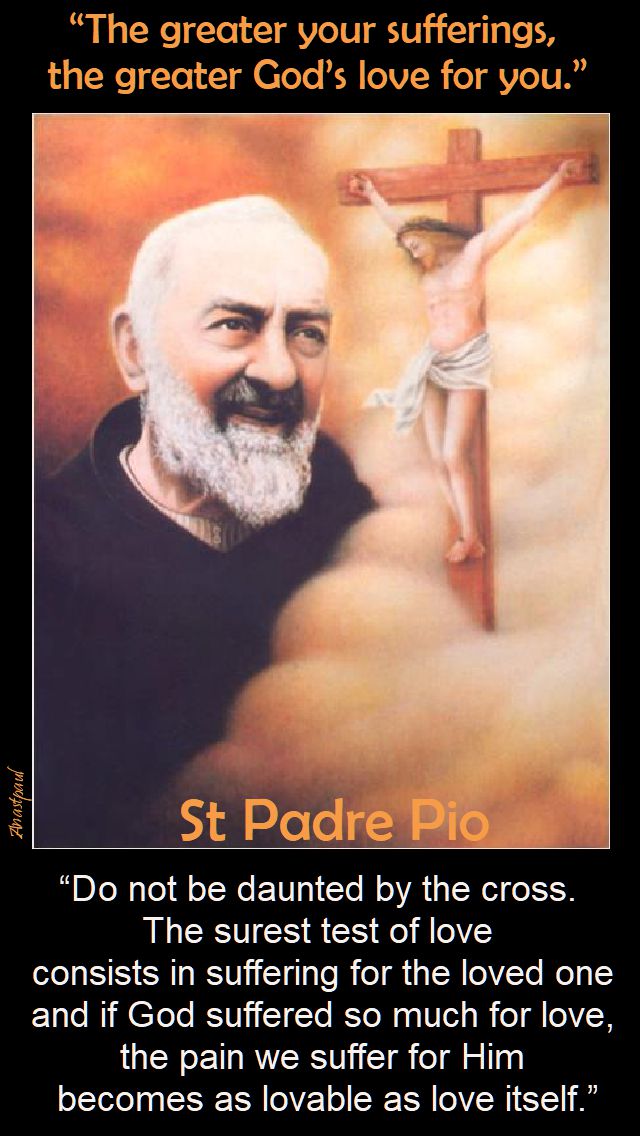 “God will never permit anything,
to happen to us, that is not for our greater good.”

“The storms that are raging around you,
will turn out to be for God’s glory,
your own merit
and the good of many souls.”

“In all the free time you have,
once you have finished your duties of state,
you should kneel down and pray the Rosary.
Pray the Rosary before the Blessed Sacrament
or before a crucifix.”

“Do you not see the Madonna always beside the Tabernacle?”

“Listen to the Mass, the way the Virgin Mary, stood at .. Calvary..”

“We have close to us, an angelic spirit,
who never leaves us for an instant,
from the cradle to the grave,
who guides and protects us,
like a friend or a brother.” 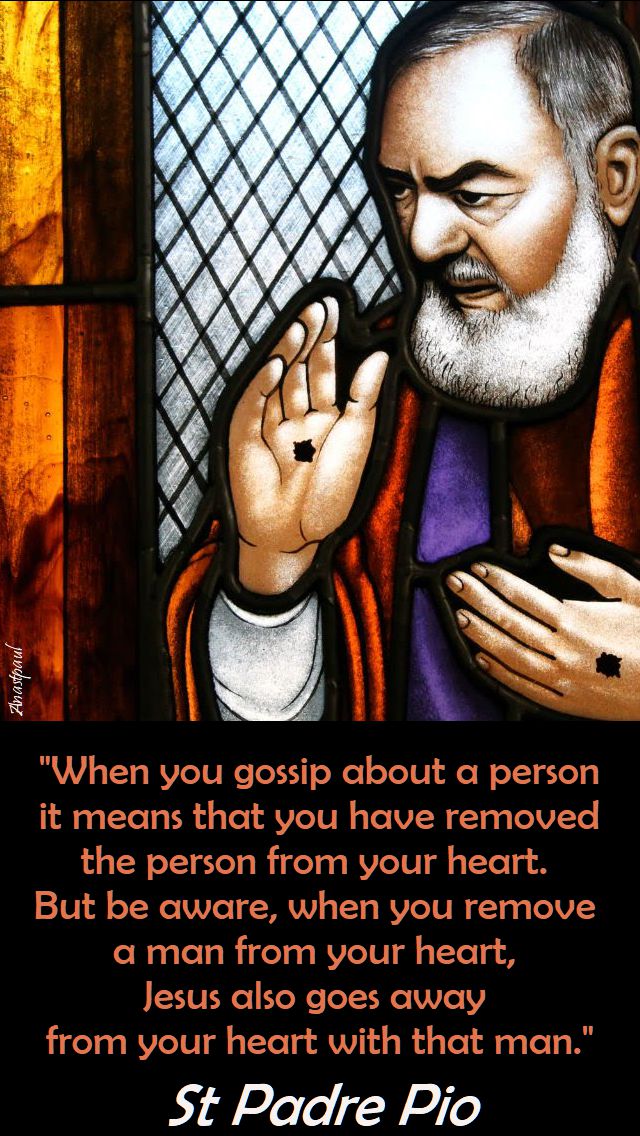 REFLECTION – “The life of a Christian is nothing but a perpetual struggle against self:
there is no flowering of the soul to the beauty of its perfection, except at the price of pain.”………St Pio of Pietrelcina (1887-1968) 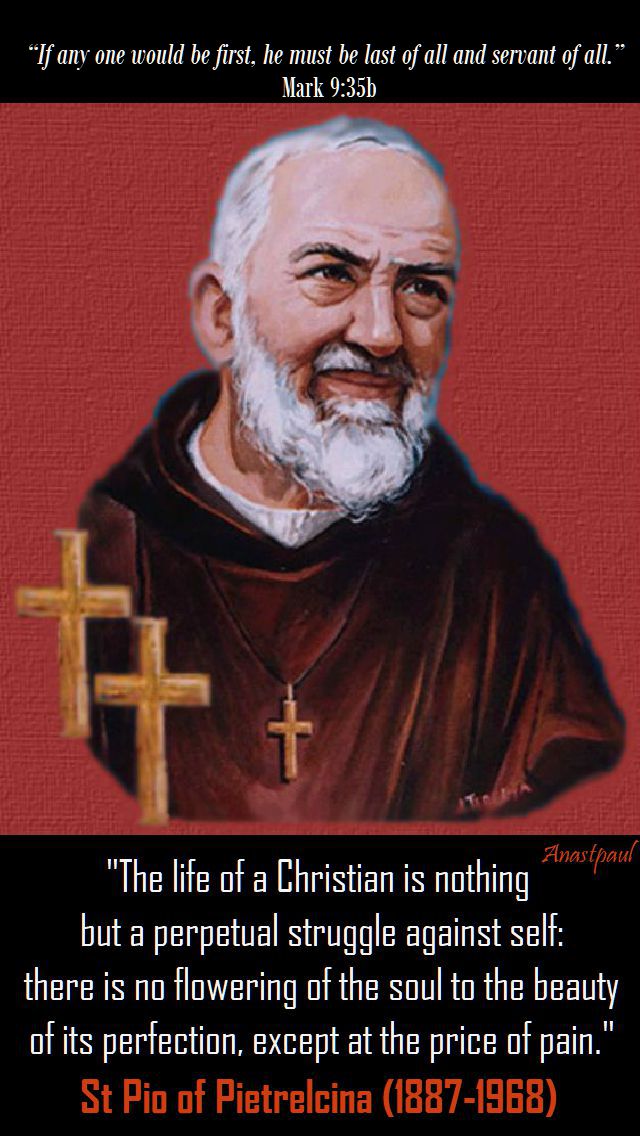 PRAYER – “And you, Blessed Padre Pio, look down from heaven upon us assembled …today.   Intercede for all those who, in every part of the world, are spiritually united … and raise their prayers to you.   Come to the help of everyone;  give peace and consolation to every heart. Amen!” – from the homily of St Pope John Paul II at the Beatification of Padre Pio

Saint of the Day – 23 September – St Pope Linus (c 10 – c 76) Successor to St Peter – born c 10 in Volterra, Tuscany, Italy, Roman Empire and died c 76 in Rome, Italy, Roman Empire – his papacy lasted from c 67 to his death.   Among those to have held the position of pope, Peter, Linus and Clement are specifically mentioned in the New Testament.   Linus is mentioned in the closing greeting of the Second Epistle to Timothy as being with Paul in Rome near the end of Paul’s life.

The earliest witness to Linus’s status as bishop was Irenaeus (c 130-202), who in about the year 180 wrote, “The blessed apostles, then, having founded and built up the Church, committed into the hands of Linus the office of the episcopate.”    Linus is presented by St Jerome (343-420) as “the first after Peter to be in charge of the Roman Church” and by Eusebius as “the first to receive the episcopate of the church at Rome, after the martyrdom of Paul and Peter”.     St John Chrysostom wrote, “This Linus, was second Bishop of the Church of Rome after Peter”, while the Liberian Catalogue presents Peter as the first Bishop of Rome and Linus as his successor in the same office.

The Liber Pontificalis (Latin for ‘pontifical book’ or Book of the Popes is a book of biographies of popes from Saint Peter until the 15th century), also presents a list that makes Linus the second in the line of bishops of Rome, after Peter, while also stating that Peter consecrated two bishops, Linus and Anacletus, for the priestly service of the community, devoting himself instead to prayer and preaching and that it was to Clement that he entrusted the Church as a whole, appointing him as his successor.   Tertullian too wrote of Clement as the successor of Peter.    Jerome classified Clement as “the fourth bishop of Rome after Peter” (i.e., fourth in a series that included Peter), adding that, “most of the Latins think that Clement was second after the apostle.”

According to Liber Pontificalis, Linus issued a decree that women should cover their heads in church, created the first fifteen bishops and that he died a martyr and was buried on the Vatican Hill next to Peter.   It gives the date of his death as 23 September, the date on which his feast is still celebrated.   His name is included in the Roman Canon of the Mass.

With respect to Linus’s supposed decree requiring women to cover their heads, J.P. Kirsch commented in the Catholic Encyclopedia:  “Without doubt this decree is apocryphal and copied by the author of the Liber Pontificalis from the first Epistle of St Paul to the Corinthians (11:5) and arbitrarily attributed to the first successor of the Apostle in Rome.   The statement made in the same source, that Linus suffered martyrdom, cannot be proved and is improbable.   For between Nero and Domitian there is no mention of any persecution of the Roman Church and Irenaeus (1. c., III, iv, 3) from among the early Roman bishops designates only “Telesphorus as a glorious martyr.”

The Roman Martyrology does not list Linus as a martyr.   The entry about him is as follows:   “At Rome, commemoration of Saint Linus, Pope, who, according to Irenaeus, was the person to whom the blessed Apostles entrusted the episcopal care of the Church founded in the City and whom blessed Paul the Apostle mentions as associated with him.”

St Peter Acontanto
St Polyxena
St Thecla of Iconium (1st century)
Bl William Way
St Xantippa
—
Martyrs of Syracuse – (4 saints): Group of Christians deported from Syracuse, Sicily by invading Saracens and sent to North Africa where they were tortured and executed for their faith. Martyrs. The names that have survived are Andrew, Antony, John and Peter. c900