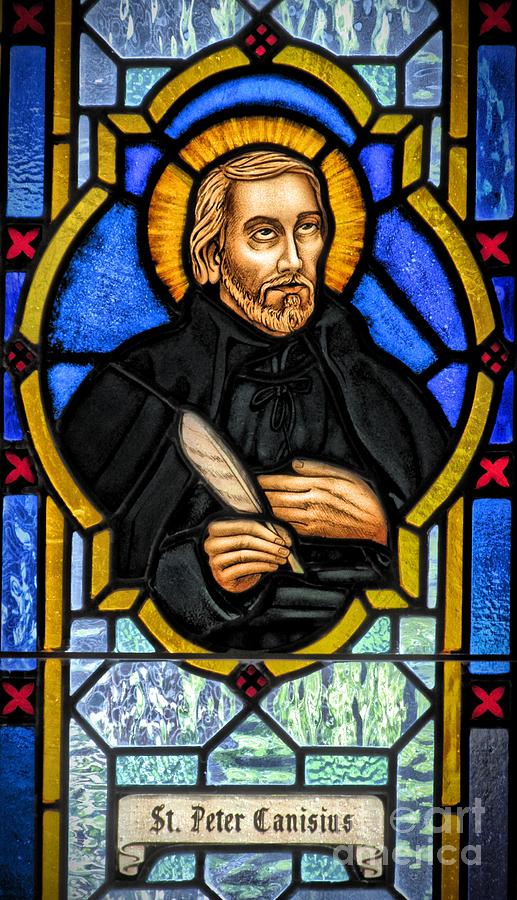 He was born on 8 May 1521 in Wijmegen, Holland.   His father was Burgomaster of the town.   While he was a student at the University of Cologne he regularly visited the Carthusian monks of St Barbara, a driving force of Catholic life and other devout men who cultivated the spirituality of the so-called devotio moderna [modern devotion].

He entered the Society of Jesus on 8 May 1543 in Mainz (Rhineland — Palatinate), after taking a course of spiritual exercises under the guidance of Bl (now Saint) Pierre Favre, Petrus [Peter] Faber, one of St Ignatius of Loyola’s first companions.   He was ordained a priest in Cologne.   Already the following year, in June 1546, he attended the Council of Trent, as the theologian of Cardinal Otto Truchsess von Waldburg, Bishop of Augsberg, where he worked with two confreres, Diego Laínez and Alfonso Salmerón.   In 1548, St Ignatius had him complete his spiritual formation in Rome and then sent him to the College of Messina to carry out humble domestic duties.

He earned a doctorate in theology at Bologna on 4 October 1549 and St Ignatius assigned him to carry out the apostolate in Germany.   On 2 September of that same year he visited Pope Paul III at Castel Gandolfo and then went to St Peter’s Basilica to pray.   Here he implored the great Holy Apostles Peter and Paul for help to make the Apostolic Blessing permanently effective for the future of his important new mission.   He noted several words of this prayer in his spiritual journal.

He said:  “There I felt that a great consolation and the presence of grace had been granted to me through these intercessors [Peter and Paul].   They confirmed my mission in Germany and seemed to transmit to me, as an apostle of Germany, the support of their benevolence.   You know, Lord, in how many ways and how often on that same day you entrusted Germany to me, which I was later to continue to be concerned about and for which I would have liked to live and die”.

We must bear in mind that we are dealing with the time of the Lutheran Reformation, at the moment when the Catholic faith in the German-speaking countries seemed to be dying out in the face of the fascination of the Reformation.   The task of Canisius — charged with revitalising or renewing the Catholic faith in the Germanic countries — was almost impossible.   It was possible only by virtue of prayer.   It was possible only from the centre, namely, a profound personal friendship with Jesus Christ, a friendship with Christ in His Body, the Church, which must be nourished by the Eucharist, His Real Presence.

In obedience to the mission received from Ignatius and from Pope Paul III, Canisius left for Germany.   He went first to the Duchy of Bavaria, which for several years was the place where he exercised his ministry.   As dean, rector and vice chancellor of the University of Ingolstadt, he supervised the academic life of the Institute and the religious and moral reform of the people.   In Vienna, where for a brief time he was diocesan administrator, he carried out his pastoral ministry in hospitals and prisons, both in the city and in the countryside and prepared the publication of his Catechism.   In 1556 he founded the College of Prague and, until 1569, was the first superior of the Jesuit Province of Upper Germany.   In this office he established a dense network of communities of his Order in the Germanic countries, especially colleges, that were starting points for the Catholic Reformation, for the renewal of the Catholic faith. 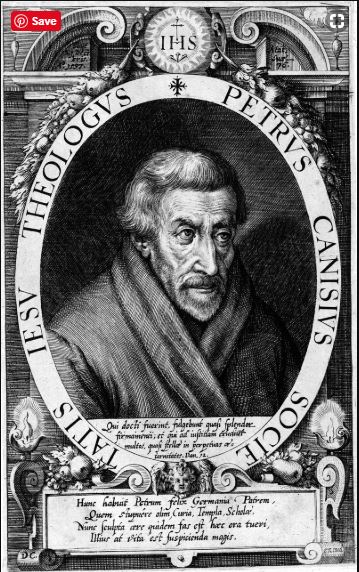 At that time he also took part in the Colloquy of Worms with Protestant divines, including Philip Melanchthon (1557);  He served as Papal Nuncio in Poland (1558);  he took part in the two Diets of Augsberg (1559 and 1565); he accompanied Cardinal Stanislaw Hozjusz, Legate of Pope Pius IV, to Emperor Ferdinand (1560);  and he took part in the last session of the Council of Trent where he spoke on the issue of Communion under both Species and on the Index of Prohibited Books (1562).

In 1580 he withdrew to Fribourg, Switzerland, where he devoted himself entirely to preaching and writing.   He died there on 21 December 1597.   Bl Pius IX Beatified him in 1864 and in 1897 Pope Leo XIII proclaimed him the “Second Apostle of Germany”. Pope Pius XI Canonised him and proclaimed him a Doctor of the Church in 1925.

St Peter Canisius spent a large part of his life in touch with the most important people of his time and exercised a special influence with his writings.   He edited the complete works of Cyril of Alexandria and of St Leo the Great, the Letters of St Jerome and the Orations of St Nicholas of Flüe.   He published devotional books in various languages, biographies of several Swiss Saints and numerous homiletic texts. 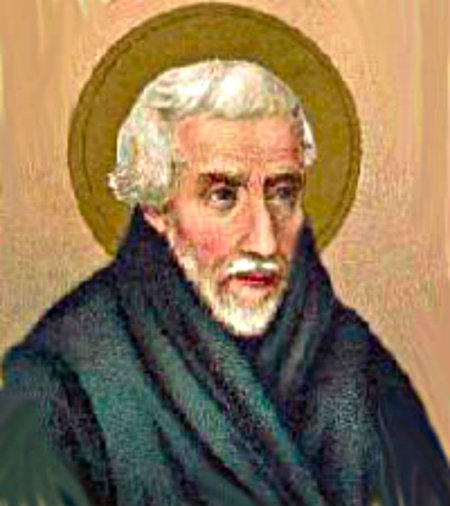 However, his most widely disseminated writings were the three Catechisms he compiled between 1555 and 1558.   The first Catechism was addressed to students who could grasp the elementary notions of theology;  the second, to young people of the populace for an initial religious instruction;  the third, to youth with a scholastic formation of middle and high school levels.   He explained Catholic doctrine with questions and answers, concisely, in biblical terms, with great clarity and with no polemical overtones.

There were at least 200 editions of this Catechism in his lifetime alone!   And hundreds of editions succeeded one another until the 20th century.   So it was, that still in my father’s generation people in Germany were calling the Catechism simply “the Canisius”.   He really was the Catechist of Germany for centuries, he formed people’s faith for centuries.   This was a characteristic of St Peter Canisius – his ability to combine harmoniously fidelity to dogmatic principles with the respect that is due to every person. St Canisius distinguished between a conscious, blameworthy apostosy from faith and a blameless loss of faith through circumstances.

Moreover, he declared to Rome that the majority of Germans who switched to Protestantism were blameless.   In a historical period of strong confessional differences, Canisius avoided — and this is something quite extraordinary — the harshness and rhetoric of anger — something rare, as I said, in the discussions between Christians in those times — and aimed only at presenting the spiritual roots and at reviving the faith in the Church.   His vast and penetrating knowledge of Sacred Scripture and of the Fathers of the Church served this cause, the same knowledge that supported his personal relationship with God and the austere spirituality that he derived from the Devotio Moderna and Rhenish mysticism.

Characteristic of St Canisius’ spirituality was his profound personal friendship with Jesus.   For example, on 4 September 1549 he wrote in his journal, speaking with the Lord:  “In the end, as if You were opening to me the heart of the Most Sacred Body, which it seemed to me I saw before me, You commanded me to drink from that source, inviting me, as it were, to draw the waters of my salvation from Your founts, O my Saviour”.

Then he saw that the Saviour was giving him a garment with three pieces that were called peace, love and perseverance.   And with this garment, made up of peace, love and perseverance, Canisius carried out his work of renewing Catholicism.   His friendship with Jesus — which was the core of his personality — nourished by love of the Bible, by love of the Blessed Sacrament and by love of the Fathers, this friendship was clearly united with the awareness of being a perpetuator of the Apostles’ mission in the Church. And this reminds us that every genuine evangeliser is always an instrument united with Jesus and with His Church and is fruitful for this very reason.

Friendship with Jesus had been inculcated in St Peter Canisius in the spiritual environment of the Charterhouse of Cologne, in which he had been in close contact with two Carthusian mystics – Johannes Lansperger, whose name has been Latinized as “Lanspergius” and Nikolaus van Esche, Latinized as “Eschius”.

He subsequently deepened the experience of this friendship, familiaritas stupenda nimis, through contemplation of the mysteries of Jesus’ life, which form a large part of St Ignatius’ Spiritual Exercises.   This is the foundation of his intense devotion to the Heart of the Lord, which culminated in his consecration to the apostolic ministry in the Vatican Basilica.

The Christocentric spirituality of St Peter Canisius is rooted in a profound conviction – no soul anxious for perfection fails to practice prayer daily, mental prayer, an ordinary means that enables the disciple of Jesus to live in intimacy with the divine Teacher.

For this reason in his writings for the spiritual education of the people, our Saint insists on the importance of the Liturgy with his comments on the Gospels, on Feasts, on the Rite of Holy Mass and on the sacraments;  yet, at the same time, he is careful to show the faithful the need for and beauty of personal daily prayer, which should accompany and permeate participation in the public worship of the Church.   This exhortation and method have kept their value intact, especially after being authoritatively proposed anew by the Second Vatican Council in the Constitution Sacrosanctum Concilium, Christian life does not develop unless it is nourished by participation in the Liturgy — particularly at Sunday Mass — and by personal daily prayer, by personal contact with God. 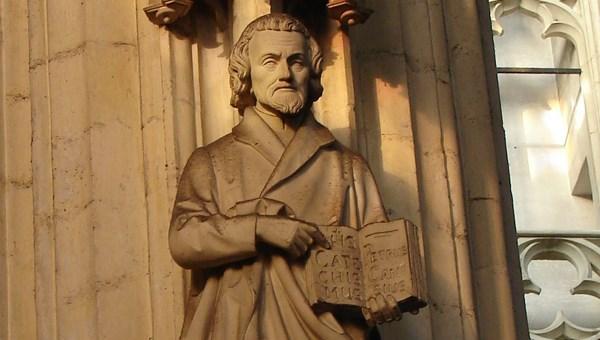 Among the thousands of activities and multiple distractions that surround us, we must find moments for recollection before the Lord every day, in order to listen to Him and speak with Him.

At the same time, the example that St Peter Canisius has bequeathed to us, not only in his works but especially with his life, is ever timely and of lasting value.   He teaches clearly that the apostolic ministry is effective and produces fruits of salvation in hearts only if the preacher is a personal witness of Jesus and an instrument at His disposal, bound to Him closely by faith in His Gospel and in His Church, by a morally consistent life and by prayer as ceaseless as love.   And this is true for every Christian who wishes to live his adherence to Christ with commitment and fidelity.