FEBRUARY – THE MONTH OF THE HOLY FAMILY 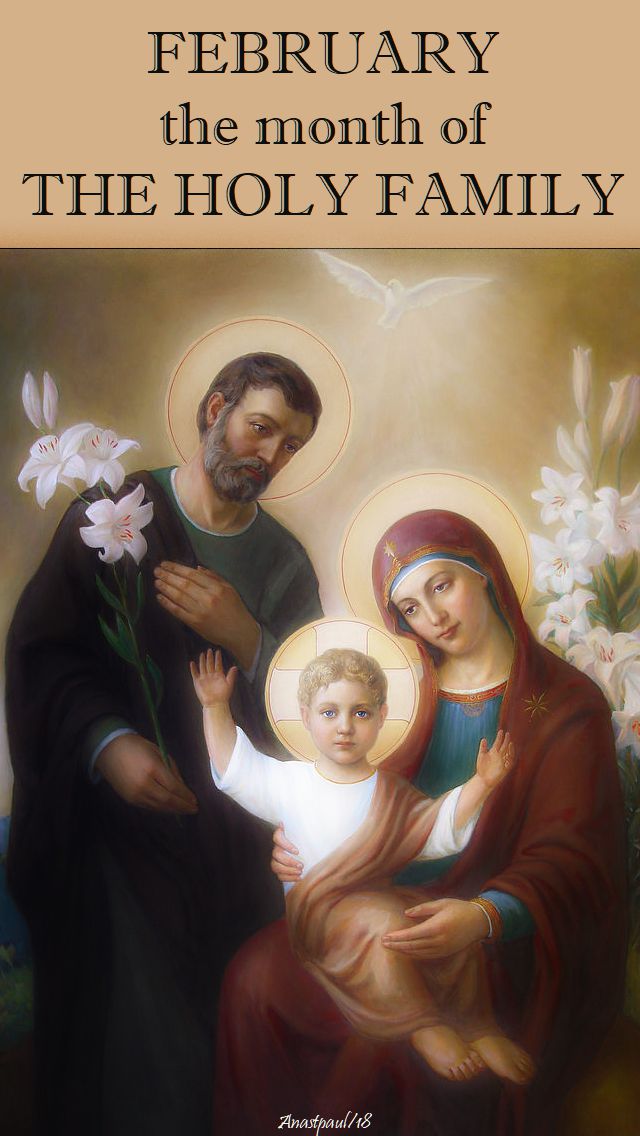 In January, the Catholic Church celebrated the Month of the Holy Name of Jesus and in February, we turn to the entire Holy Family—Jesus, Mary and Joseph.

This devotion soon spread and in 1893 Pope Leo XIII expressed his approval of a feast under this title and himself composed part of the Office.   On account of the flight into Egypt this feast has been observed by the Copts from early times.

The feast was welcomed by succeeding Pontiffs as an efficacious means for bringing home to the Christian people the example of the Holy Family at Nazareth and by the restoration of the true spirit of family life, stemming, in some measure, the evils of present-day society.

In the words of His Holiness Pope Leo XIII, “Nothing truly can be more salutary or efficacious for Christian families to meditate upon than the example of this Holy Family, which embraces the perfection and completeness of all domestic virtues.” 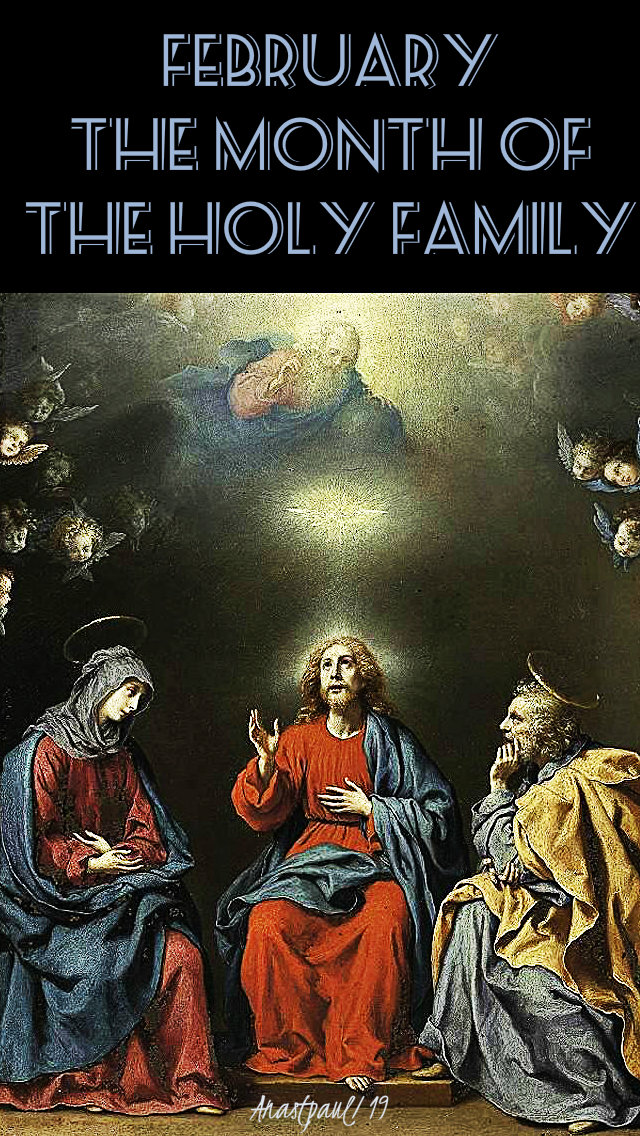 Prayer to the Holy Family
By Pope Francis
Angelus, 29 December 2013

Jesus, Mary and Joseph,
in You we contemplate
the splendour of true love,
to You we turn with trust.

Holy Family of Nazareth,
grant that our families too
may be places of communion and prayer,
authentic schools of the Gospel
and small domestic Churches.

Holy Family of Nazareth,
may families never again
experience violence, rejection and division:
may all who have been hurt or scandalised
find ready comfort and healing.

Holy Family of Nazareth,
may we be made
once more mindful
of the sacredness
and inviolability of the family,
and its beauty in God’s plan.

(This prayer was composed for the Synod of the Family in 2014, so it has been very slightly adapted to remove the reference to the said Synod).

For a generous welcome
of the victims of human trafficking,
of enforced prostitution
and of violence. 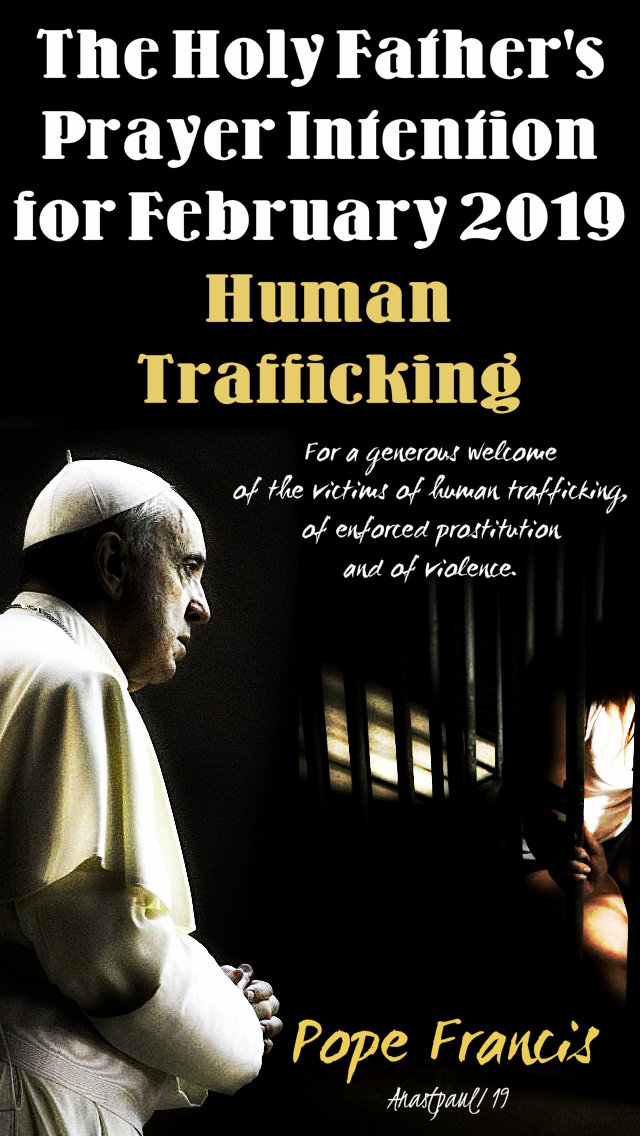 Saint Josephine Bakhita, you were sold into slavery as a child
and endured unspeakable hardship and suffering.
Once liberated from your physical enslavement,
you found true redemption in your encounter
with Christ and his Church.
O Saint Josephine Bakhita,
assist all those who are entrapped in slavery.
Intercede on their behalf with the God of Mercy,
so that the chains of their captivity will be broken.
May God Himself free all those who have been threatened,
wounded or mistreated by the trade and trafficking of human beings.
Bring comfort to survivors of this slavery
and teach them to look to Jesus,
as an example of hope and faith,
so that they may find healing from their wounds.
We ask you to pray for us and to intercede on behalf of us al,
that we may not fall into indifference,
that we may open our eyes
and be able to see the misery and wounds
of our many brothers and sisters
deprived of their dignity and their freedom
and may we hear their cry for help.
Amen

PRAYER FROM THE
ADDRESS OF HIS HOLINESS POPE FRANCIS
TO PARTICIPANTS IN THE WORLD DAY OF PRAYER,
REFLECTION AND ACTION
AGAINST HUMAN TRAFFICKING

St Brigid directly influenced several other future saints of Ireland and her many religious communities helped to secure the country’s conversion from paganism to the Catholic faith.

The Irish call on her in every need, for, as the ancient legends run, “everything that Brigid asked of the Lord, was granted her at once.   For this was her desire – to satisfy the poor, to expel every hardship, to spare every miserable man.”   And, she still carries on this mission today.

St Brigid took the whole of humanity into her heart and 1500 years after her death, the power of goodness and holiness reaches down through the centuries.   There was no limit to her charity and her love for all.   God thus graced her with great power to do good for all.   There should be no limit to ours – imagine a world such as this!

St Brigid of Ireland, Pray for Us!

And he said, “The kingdom of God is as if a man
should scatter seed upon the ground and should sleep and rise,
night and day and the seed should sprout and grow, he knows not how.”...Mark 4:26-28

REFLECTION – “We can be confident because the Word of God is a creative word, destined to become the “full grain in the ear” (v. 28).   This Word, if accepted, certainly bears fruit, for God Himself makes it sprout and grow in ways that we cannot always verify or understand. (cf. v. 27).   All this tells us that it is always God, it is always God who makes His Kingdom grow.   That is why we fervently pray “thy Kingdom come”.   It is He who makes it grow.   Man is His humble collaborator, who contemplates and rejoices in divine creative action and waits patiently for its fruits.”…Pope Francis – Angelus, 14 June 2015

PRAYER – Almighty Father, we bless You Lord of life, through whom all living things tend.  You are the source of all, our first beginning and our end!   Grant holy Father, that we may allow the Word to enter our hearts and grow by Your grace, so that we may always live for Your glory.   May the intercession of St Brigid of Ireland, who consistently tended Your seed, grant us strength and zeal.   Through Jesus Christ, our Lord with the Holy Spirit, God forever, amen.

O most merciful Jesus,
grant me Your grace,
that it may remain with me always
and persevere with me to the end.
Grant me always to will and desire,
what is more pleasing and acceptable to You.
Let Your will be mine
and let my will always follow Yours
in perfect conformity with it.
Let my will and desires, always be one with Yours
and let me be unable to will or not to will,
except as You will or do not will.
Grant that I may die to all worldly things
and that I may be despised and unknown
for love of You.
Grant, above all things to be desired,
that I may find rest in You
and that in Your Heart alone, may be my peace.
You, O Lord, give true peace to the heart
and perfect rest to body and soul.
Apart from You, all is difficult and never still.
In that peace, in You Who are the one,
supreme and eternal Good,
I will sleep and take my rest.
Amen

Next to the glorious St Patrick, St Brigid, whom we may consider his spiritual daughter in Christ, has ever been held in singular veneration in Ireland.

Historians say we know a lot more about St Brigid than we have facts, a polite way of saying that legends swirl about Ireland’s most celebrated woman.   But even legends may have cores of truth.   And some miracle stories are not legends at all but true accounts of God’s interventions.

Brigid was the daughter of a slave woman and a chieftain, who liberated her at the urging of his overlord.   As a girl she sensed a call to become a nun and St Mel, bishop of Armagh, received her vows.   Before Brigid, consecrated virgins lived at home with their families.   But the saint, imitating Patrick, began to assemble nuns in communities, a historic move which enriched the church in Ireland. 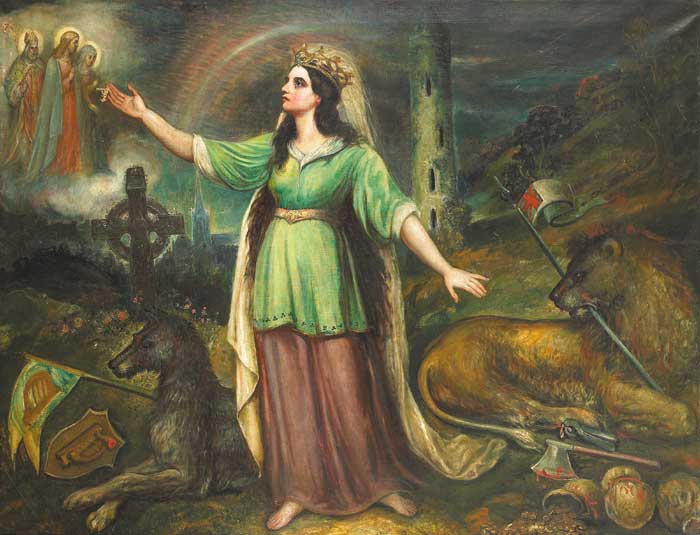 In 471, Brigid founded a monastery for both women and men at Kildare.   This was the first convent in Ireland and Brigid was the abbess.   Under her leadership Kildare became a centre of learning and spirituality.   Her school of art fashioned both lovely utensils for worship and beautifully illustrated manuscripts.   Again following Patrick’s model, Brigid used Kildare as a base and built convents throughout the island.  The renown of Brigid’s unbounded charity drew multitudes of the poor to Kildare, the fame of her piety attracted thither many persons anxious to solicit her prayers or to profit by her holy example.   In course of time the number of these so much increased that it became necessary to provide accommodation for them in the neighbourhood of the new monastery and thus was laid the foundation and origin of the town of Kildare. 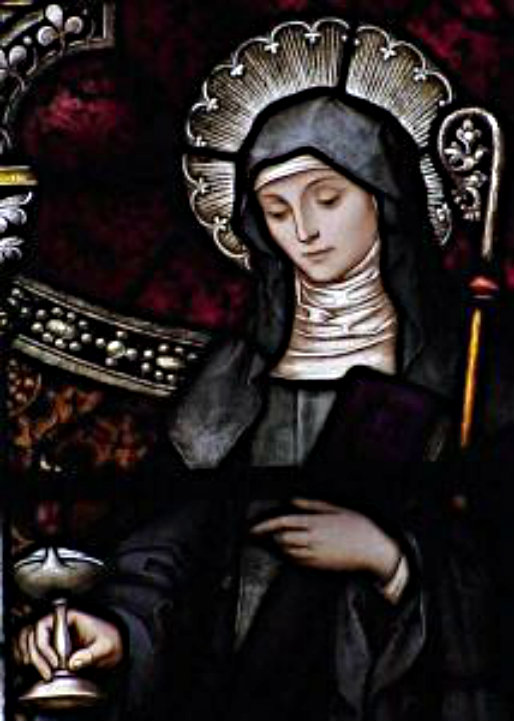 Brigid’s hallmark was uninhibited, generous giving to anyone in need.   Many of the saint’s earliest miracles seem to have rescued her from punishment for having given something to the poor that was intended for someone else.   For example, once as a child she gave a piece of bacon to a dog and was glad to find it replaced when she was about to be disciplined.   Brigid exhibited this unbounded charity all her life, giving away valuables, clothing, food—anything close by—to anyone who asked.

One of the most appealing things told of Brigid is her contemporaries’ belief that there was peace in her blessing.   Not merely did contentiousness die out in her presence but just as by the touch of her hand she healed leprosy, so by her very will for peace she healed strife and laid antiseptics on the suppurating bitterness that foments it.

In the ninth century, the country being desolated by the Danes, the remains of St Brigid were removed in order to secure them from irreverence and, being transferred to Down-Patrick, were deposited in the same grave with those of the glorious St Patrick.   Their bodies, together with that of St Columba, were translated afterwards to the cathedral of the same city but their monument was destroyed in the reign of King Henry VIII.   The head of St Brigid is now kept in the church of the Jesuits at Lisbon.

Saint Brigid’s Cross
A special type of cross known as “Saint Brigid’s cross” is popular throughout Ireland. It commemorates a famous story in which Brigid went to the home of a pagan leader when people told her that he was dying and needed to hear the Gospel message quickly.   When Brigid arrived, the man was delirious and upset, unwilling to listen to what Brigid had to say.   So she sat with him and prayed and while she did, she took some of the straw from the floor and began weaving it into the shape of a cross. Gradually the man quieted down and asked Brigid what she was doing.   She then explained the Gospel to him, using her handmade cross as a visual aid.   The man then came to faith in Jesus Christ and Brigid baptised him just before he died.
Today, many Irish people display a Saint Brigid’s cross in their homes, since it is said to help ward off evil and welcome good.  Brigid died in 523 and after her death people began to venerate her as a saint, praying to her for help seeking to heal from God, since many of the miracles during her lifetime related to healing.

Father of all creation and Lord of Light,
You have given us life and entrusted Your creation to us, to use it and to care for it.
We ask You to bless these crosses made of green rushes in memory of holy Brigid,
who used the cross to recall and to teach Your Son’s life, death and resurrection.
May these crosses be a sign of our sharing in the Paschal Mystery of your Son
and a sign of Your protection of our lives, our land and its creatures,
through Brigid’s intercession, during the coming year and always.
We ask this through Christ our Lord.

The crosses are sprinkled with holy water:

May the blessing of God, Father, Son and Holy Spirit
be on these crosses and on the places where they hang
and on everyone who looks at them.
Amen