20 October 2019 will mark the 93rd World Mission Sunday and this year, the Holy Father has proclaimed October as as ‘Extraordinary Missionary Month’ to be marked and celebrated in the whole Church throughout the world and entrusted the mission of the Church in the world especially to St Pope John Paul II, as Pope Francis made the announcement he said – “On the day of the liturgical memory of Saint John Paul II, missionary Pope, we entrust to his intercession the mission of the Church in the world.’

The first World Mission Day was celebrated in October 1926, eight months after the death of Blessed Joseph Allamano.   This is not a simple coincidence because Joseph Allamano dedicated a great deal of his time and influence during the last years of his life, to the effort of creating awareness in the Church, about the need for a World Mission Day to be celebrated once a year by all Catholics.

This was in line with his vision that Missions and missionary work were the duty of every baptised believer, each one according to his abilities and possibilities but none exempted.   Allamano did not see here on earth the fulfilment of his efforts for the creation of this day of prayer and commitment but witnessed it from heaven.

He can be compared to Fidelis of Sigmaringen (1577-1622), a saint he especially admired and proposed as Patron to his Missionaries, who in his time insisted tirelessly on the need to create in Rome a Congregation for the Evangelisation of the Peoples and died a martyr of the faith in April 1622, three months before the creation of the Congregation of Propaganda Fide (for the Propagation of the Faith).

For Allamano it was not simply a question of awakening the missionary zeal in others, he always looked at his faith, whatever the circumstances, as a faith to be shared with the entire world.   He would subscribe especially to the Pope Benedict’s message statement that “every Christian community is born missionary and it is exactly on the basis of the courage to evangelise that the love of believers for their Lord is measured”. (Pope Benedict’s Message 2001 – To All the Churches of the World)

The sources of Joseph’s personal tenderness for all, for the whole world, were Our Lady Consolata and the Eucharist.   The love towards our Mother Mary and the Eucharist made him speak words belonging uniquely to him.   He became progressive resulting in marked changes in his attitude and behaviour  . It was a life shaped by Mary and Jesus. Familiar to us, the sons and daughters of Allamano, are these very words, ‘First Saints and then Missionaries.’

For sure, Blessed Allamano was an excellent father in human relationships.   Who was the source of his inspiration and wisdom?   Indeed, it is only from the Eucharist that Joseph Allamano found God in His essence, the pure love.   Therefore, Allamano became a witness of the pure love, Jesus.   Ultimately, he was inspired to send missionaries to be ‘SACRAMENTINI’ as he would say.   He sent them to ‘love the Eucharist’.

My prayer, is that Blessed Joseph Allamano, priest and missionary for the entire world, may bless all our parish communities and all the Catholics of the world, that our zeal and determination may be increased, to make our treasure, the Gospel and the Holy Eucharist, our Lord and Saviour, available to all.

May we all become Sacramentini!  Amen

“…Essentially, every priest has a missionary vocation.
This vocation, is that great love of the Lord,
that compels us, to do all we can,
to make Our Lord Jesus Christ known and loved,
by those, who have not yet encountered Him.” 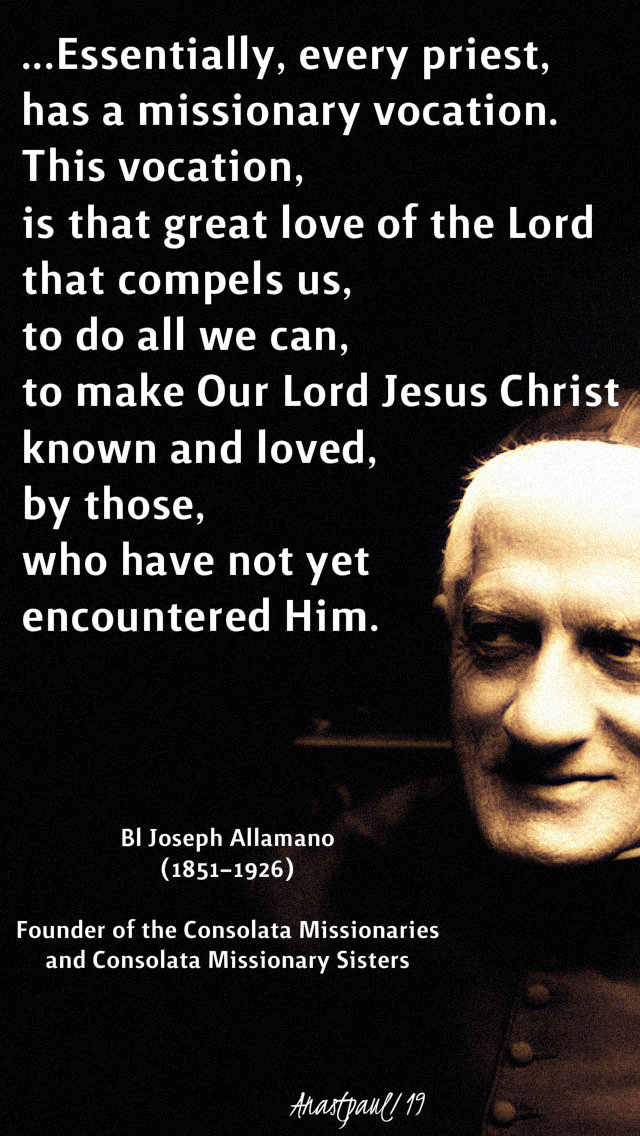 Blessed Joseph Allamano was
“a Priest for the whole world.”

on the Beatification of Bl Joseph Allamano, 7 October 1990 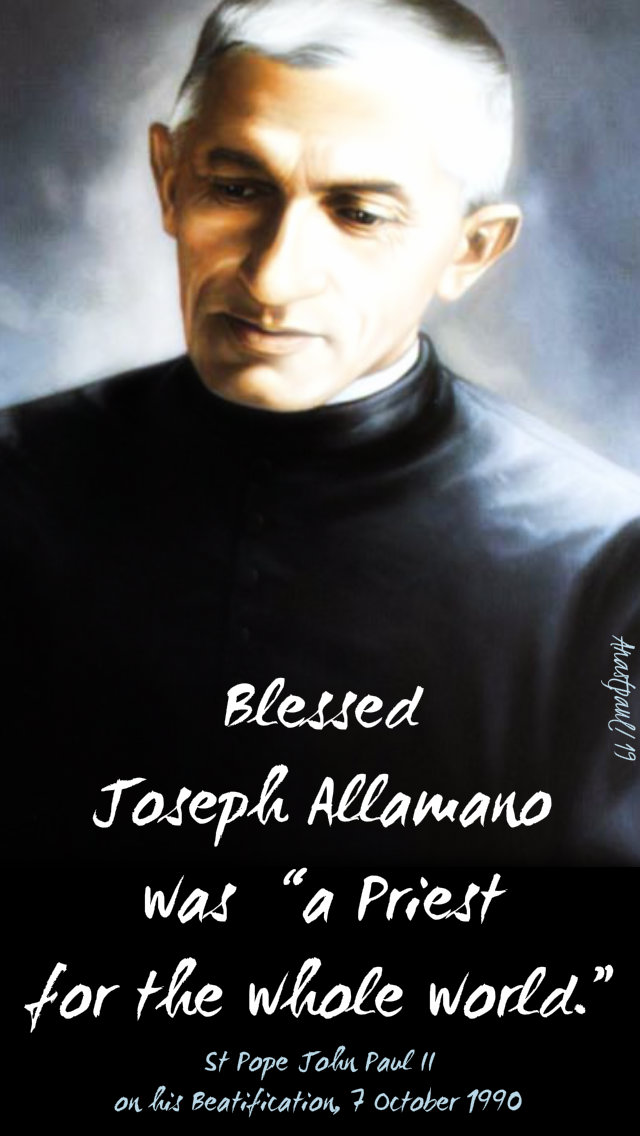 And the Lord God made for Adam and for his wife, garments of skins and clothed them…Genesis 3:21

REFLECTION – “The merciful protection of God for man and woman, in every case, never fails either of them.   Let us not forget this!   The symbolic language of the Bible tells us, that before exiling them from the Garden of Eden, God made for man and woman garments of skins and clothed them (cf. Gn 3:21).   This act of tenderness, means that, in the painful consequences of our sin, God does not want us to be left naked and abandoned to our fate as sinners.”…Pope Francis – General Audience, 16 September 2015

PRAYER – Loving and merciful Father!   In all our needs, even when we turn from You and cause You sorrow, You are there to help us!   You grace us with garments of love to protect us from the evils which surround us.   Bless us we pray, as we turn to You in pain and repentance and by the sufferings of Your divine Son Whom You sent to redeem us, grant us peace.   May the prayers of Blessed Joseph Allamano intercede in our strife as we make our way home to You.   Through Jesus our Lord, with the Holy Spirit, one God for all eternity, amen.

O Mary, my Mother
and my Lady,
I offer You my soul, my body,
my life and my death
and all that will follow it.
I place everything in Your hands.
O my Mother,
cover my soul with Your virginal mantle
and grant me the grace
of purity of heart, soul and body.
Defend me with Your power against all enemies
and especially against those
who hide their malice
behind the mask of virtue.
O lovely lily!
You are for me a mirror,
O my Mother!
Amen

Giuseppe Ottavio Allamano was born in Asti on 21 January 1851 as the fourth of five children to Joseph and Marianna Cafasso Allamano.   His mother was the younger sister of Saint Joseph Cafasso (1811–1860).   His father died of anthrax when Giuseppe was three.

He attended the Oratory at Valdocco and, as his Teacher, he had none other than Don Bosco.   At 22 he was ordained a priest in Turin and immediately placed in the responsible position of the formation of young seminarians.   In 1876 he obtained a doctorate in theology and at 29 he was appointed as the rector of the most important Marian shrine in the city, dedicated to the “Madonna Consolata” and formulator of the young clergy at the Ecclesiastical Council.   Between 1883 and 1885 he restructured the Sanctuary and repaired the roof.   In 1899 he commissioned the architect Carlo Ceppi to expand the interior space for the faithful with the construction of four circular chapels. Joseph ensured that the shrine became a source of spiritual renewal for all the peoples of Turin.

He also responded to requests for spiritual and material comfort of Turin supporting various social initiatives and promoting the Catholic newspapers.   In 1899 he began publishing the monthly La Consolata.

On recovering from a severe illness in 1891, he vowed to found a missionary society for priests and laymen.   Thus the Consolata Missionaries was born on 29 January 1901.   The first missionaries reached Kenya in 1902, joined in 1903 by the Sisters of Cottolengo [founded by St Joseph Benedict Cottolengo (1786–1842)].   He also founded the Consolata Missionary Sisters for women on 29 January 1910.   Their founding statement is:  “The cult of the Consolata will not only be contemplative but active”.   That is, with the missions, the Marian shrine will acquire a universal dimension. 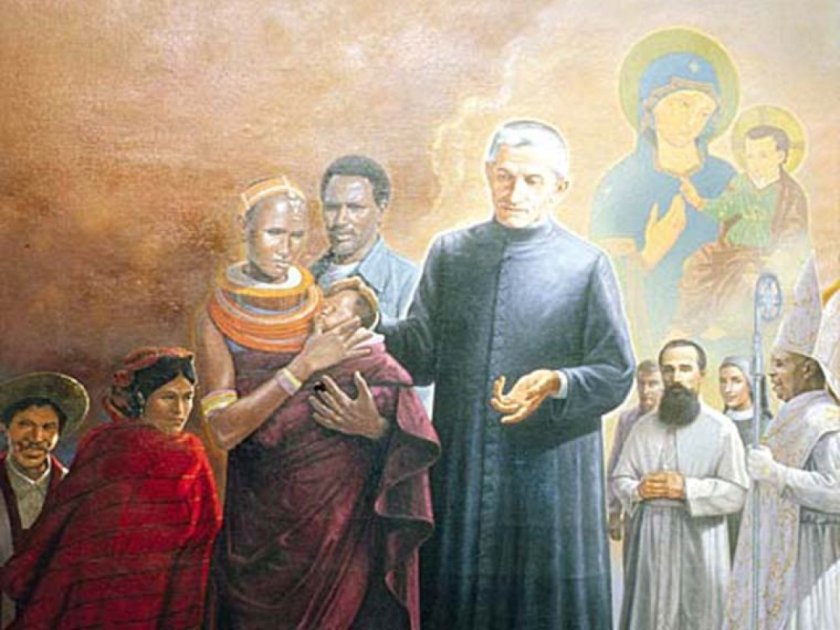 Due to the increasing size of the Christian population it became quite clear that there were not enough priests and brethren to cater to the pastoral needs of the people. Allamano expressed this deep concern to Pope Pius X during a visit to Rome in 1912.   He urged the pope to do something and perhaps establish an annual mission day to awaken missionary vocations.  The advent of the first World War ensured that the proposal was postponed.   During World War I, he worked to assist refugees and the seminarians who had been drafted.   He also worked on the cause of his uncle, who was beatified in 1925.

But, his idea for an annual day for missionaries came in 1927 when Pope Pius XI instituted World Mission Day.

He died in Turin on 16 February 1926.   His body is now preserved and venerated in the Mother House of the Consolata Missionaries, in Turin.

He was beatified by St Pope John Paul II on 7 October 1990 and his feast was set for 16 February, the day of his return to the Father’s House. 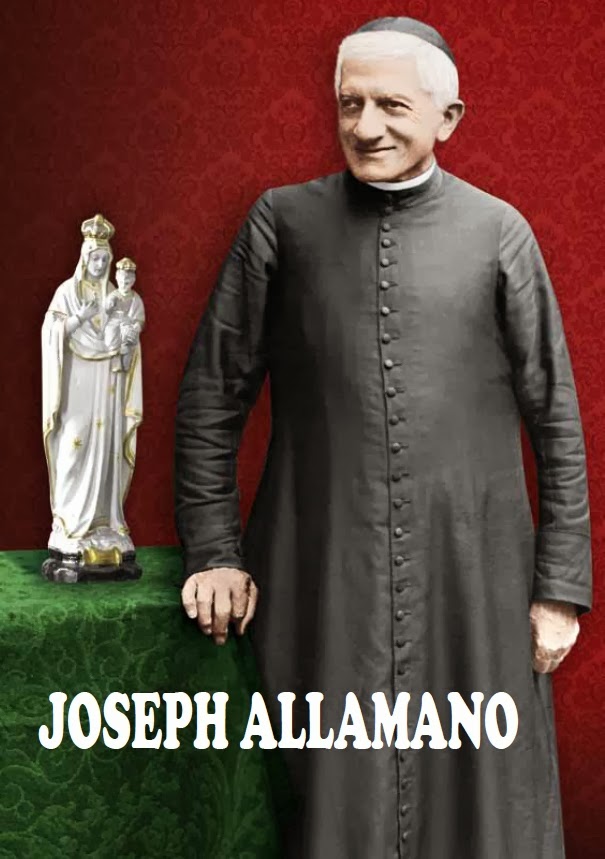 St Faustinus of Brescia
St Gilbert of Sempringham
St Honestus of Nimes
St John III of Constantinople
Bl Joseph Allamano (1851–1926) (aged 75)
St Julian of Egypt
St Juliana of Campania
St Juliana of Nicomedia
St Nicola Paglia
St Onesimus of Ephesus
Bl Philippa Mareria
—
Martyrs of Cilicia – 12 saints:  A group of Christians who ministered to other Christians who were condemned to work the mines of Cilicia in the persecutions of Maximus. They were arrested, tortured and martryed by order of the governor Firmilian.
• Daniel
• Elias
• Isaias
• Jeremy
• Samuel
The group also includes the three known have been sentenced to the mines –
• Pamphilus
• Paul of Jamnia
• Valens of Jerusalem
and those who were exposed as Christians as a result of these murders –
• Julian of Cappadocia
• Porphyrius of Caesarea
• Seleucius of Caesarea
• Theodule the Servant
They were martyred in 309 in Cilicia, Asia Minor (in modern Turkey).