Saint of the Day – 2 April – St Pedro Calungsod (1654–1672) Martyr, Sacristan, Missionary Lay Catechist – born in c 1654 in Ginatilan, Cebu, Philippines, named after Saint Peter the Apostle and died by being hacked to death with a catana on 2 April 1672 at Tomhom, Guam.   His mutilated body was thrown into the sea.   Patronages – Filipino youth, Catechumens, altar boys, the Philippines, Overseas Filipino Workers, Guam, Cebuanos, Visayans, Archdiocese of Cebu.

Pedro Calungsgod was young native of the Visayas Region in the Philippines.   Little is known about his life.   Based on accounts, Pedro was taught as a lay catechist in a Jesuit minor seminary in Loboc, Bohol.   For young recruits like him, the training consisted of learning the Catechism, Spanish, and Latin.   They would be later sent with the priests to the countryside to perform daily religious functions as altar boys or catechists.   Some of them were even sent to mission centres overseas to accompany the Jesuits in their arduous task of proclaiming the Good News and establishing the Catholic faith in foreign lands.   And that was the case of Pedro Calungsod.

He served as a teenage catechist alongside Spanish Jesuit missionaries to the violent Chamarros in the Ladrones Islands (modern Marianas) in 1668 at age 14.

When he was 17, he and his companion Fr Diego Luis de San Vitores were martyred after baptising the daughter of a Christian woman and a non-Christian village chief in the now-U.S. territory of Guam.   Upon hearing of her baptism (with the mother’s consent), the chief attacked the two missionaries.   Though Pedro could have escaped, he did not leave his companion. 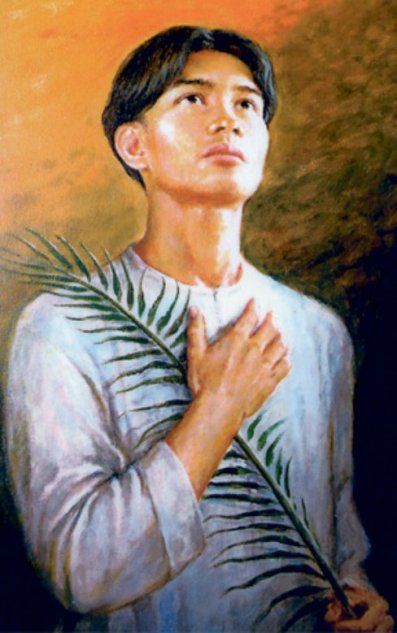 “From his childhood, Pedro Calungsod declared himself unwaveringly for Christ and responded generously to His call.   Young people today can draw encouragement and strength from the example of Pedro, whose love of Jesus inspired him to devote his teenage years to teaching the faith as a lay catechist,” Pope St. John Paul II declared during his beatification in 2000.

“In a spirit of faith, marked by strong Eucharistic and Marian devotion, Pedro undertook the demanding work asked of him and bravely faced the many obstacles and difficulties he met.   In the face of imminent danger, Pedro would not forsake Fr Diego but as a ‘good soldier of Christ’ preferred to die at the missionary’s side,” he added.

He was Beatified on 5 March 2000 by St Pope John Paul II at Vatican City and Canonised on 21 October 2012 by Pope Benedict XVI. 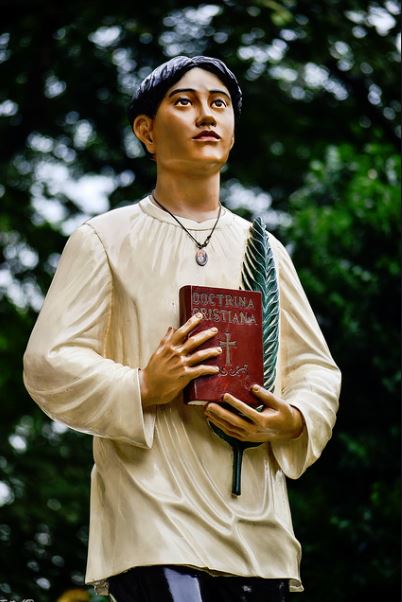