The Vatican announces the date of the Canonisation of Blessed John Henry Newman (1801-1890), along with four others on Sunday 13 October 2019, the 28th Sunday in Ordinary Time, Year C. 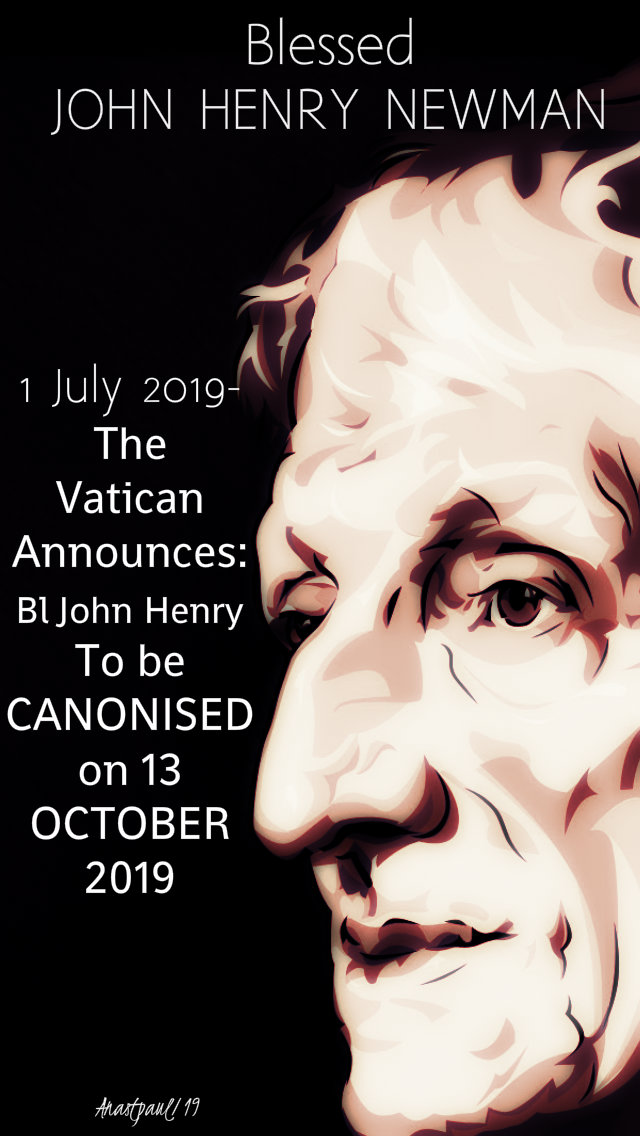 “Praise to the Holiest in the height
And in the the depth be praise.
In all His words most wonderful,
Most sure in all His ways!”
Blessed John Henry Newman

In February, the Pope signed a decree recognising a second miracle attributed to Blessed John Henry Newman, the inexplicable healing of a woman with a “life-threatening pregnancy”.

Ordained a Catholic priest in 1847, he was made a cardinal by Pope Leo XIII in 1879, although he was not a bishop.   Newman’s conversion to the Catholic faith was controversial in England and resulted in him losing many friends, including his own sister who never spoke to him again.

The British cardinal founded the Oratory of St Philip Neri in England and was particularly dedicated to education, founding two schools for boys.   He died in Birmingham in 1890 at the age of 89.

At Newman’s beatification Mass in Birmingham, England in September 2010, Pope Benedict XVI said that Newman’s “insights into the relationship between faith and reason, into the vital place of revealed religion in civilised society and into the need for a broadly-based and wide-ranging approach to education, were not only of profound importance for Victorian England but continue today, to inspire and enlighten many all over the world.   “What better goal could teachers of religion set themselves than Blessed John Henry’s famous appeal for an intelligent, well-instructed laity:   ‘I want a laity, not arrogant, not rash in speech, not disputatious but men who know their religion, who enter into it, who know just where they stand, who know what they hold and what they do not, who know their creed so well that they can give an account of it, who know so much of history that they can defend it…..”

As Blessed, John Henry’s Memorial is 9 October, the date he was received into the Catholic Church.

“God has created me to do Him some definite service.
He has committed some work to me
which He has not committed to another.
I have my mission.
I may never know it in this life
but I shall be told it in the next.
I am a link in a chain, a bond of connection between persons.
He has not created me for naught.
I shall do good, I shall do His work.
I shall be an angel of peace,
a preacher of truth in my own place,
while not intending it,
if I do but keep His commandments.
Therefore, I will trust Him…
If I am in sickness, my sickness may serve Him,
in perplexity, my perplexity may serve Him…
He does nothing in vain…
He may take away my friends.
He may throw me among strangers.
He may make me feel desolate,
make my spirits sink,
hide the future from me.
Still, He knows what He is about.”

The Others to be Canonised on the same day are:

Sister Mariam Thresia of India is the founder of the Congregation of the Sisters of the Holy Family.

Italian Sister Giuseppina Vannini is the founder of the Daughters of Saint Camillus.

Brazilian Sister Dulce Lopes Pontes of the Congregation of the Missionary Sisters of the Immaculate Conception of the Mother of God.

Marguerite Bays of Switzerland, of the Third Order of Saint Francis of Assisi.