The Love of God

If a man wants to know if he is living a good Christian life, therefore, all he has to do is ask himself if he loves God above everything and his neighbour as himself.
If he lacks this love, he is not a true Christian – everything else is insignificant, if not useless.
“Love God,” says St Augustine “and do what you will.”
Why so?
Because, if anyone loves God sincerely, he does not offend Him.
Moreover, he serves Him diligently and promotes His honour and glory by every means in his power.
Nor does he find it very difficult to do this.
Love gives wings to his feet and pours enthusiasm and fervour into his heart.
“He who loves does not feel tired,” says St Augustine.
“Where there is love,” adds St Bernard, “there is no weariness but a gentle pleasure instead.” 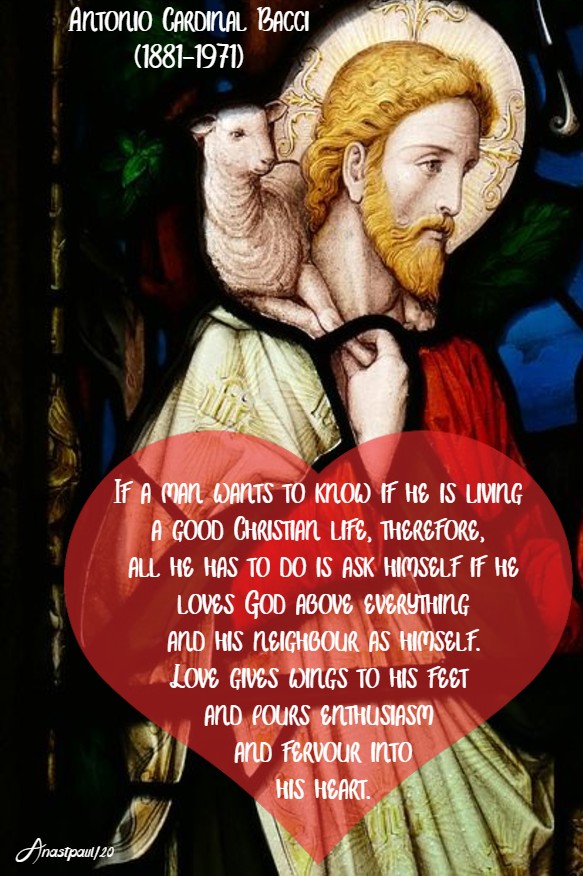 When he entered the house, the blind men came to him
and Jesus said to them,
“Do you believe that I am able to do this?”
They said to him, “Yes, Lord.”
Then he touched their eyes, saying,
“According to your faith be it done to you.”
And their eyes were opened. …

“When she heard her brother refuse her request, the holy woman joined her hands on the table, laid her head on them and began to pray.   As she raised her head from the table, there were such brilliant flashes of lightning, such great peals of thunder and such a heavy downpour of rain that neither Benedict nor his brethren could stir across the threshold of the place where they had been seated.   Sadly he began to complain:  “May God forgive you, sister.   What have you done?”  “Well,” she answered, “I asked you and you would not listen, so I asked my God and He did listen.   So now go off, if you can, leave me and return to your monastery.” … (St Pope Gregory the Great (540-604) on St Scholastica)

“I asked you and you would not listen,
so I asked my God and He did listen.”

“That they might touch only, the tassel on his cloak and as many as touched it were healed” … Mark 6:56

REFLECTION – “Jesus had planned a picnic for the tired apostles.   What a picnic it turned out to be, for no sooner did they land at Gennesaret, than crowds recognised Him and ran to tell others about Him, so that wherever He went – to villages, towns or farms – they brought to Him the sick, lying on their mats and helped them to just touch the fringe of His cloak.   This was profound personal faith, because all those who touched Him were cured.   Such faith had to be fully and suitably blessed and rewarded.
Faith is not merely a series of formulae which we profess, nor is faith a bundle of pious practices.
Faith is touching and being touched by Jesus.
The more we believe, the more shall we receive!” … Msgr Alex Rebello – Wrexham, Wales – Daily Reflections 2020 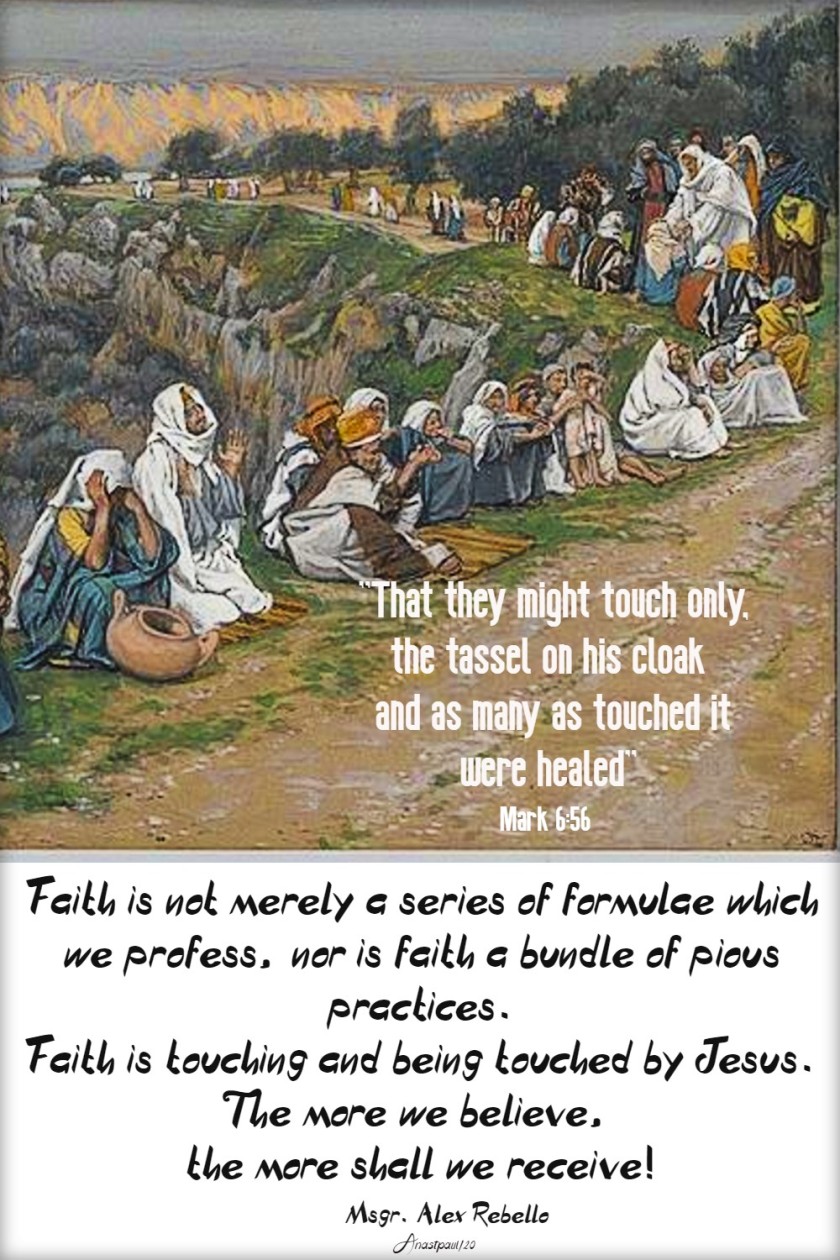 PRAYER – O God, that You created the universe so wondrously but more wondrously you created redemption.   To Your divine Son, who came to repair us and lead us to You, to take on our pain and heal us of our sin, we turn in trust and wonder and touch Him.    May the prayers of St Scholastica help us to grow in faith.   Through Christ our Lord, with the Holy Spirit, God forever, amen.

Our Morning Offering – 10 February – Monday of the Fifth Week of Ordinary Time, Year A

Br Charles’ Meditation on the last words of Jesus

Father,
I abandon myself into Your hands.
Do with me what You will.
Whatever You may do,
I thank You.
I am ready for all,
I accept all.

Let only Your will be done in me
and in all Your creatures.
I wish no more than this, O Lord.

Into Your hands
I commend my soul.
I offer it to You
with all the love of my heart.
For, I love you, Lord,
and so need to give myself,
to surrender myself into Your hands
without reserve
and with boundless confidence.

For You are my Father.
Amen

What we know as the ‘Prayer of Abandonment’ is not a prayer which Brother Charles wrote for any eventual companions, or even one he prayed himself.   Rather it came from one of his meditations on the Gospel in relation to the ‘cardinal virtues’.   These texts were written by Brother Charles in 1896 towards the end of his time with the Trappists at Akbes (Syria).   At that time he was still called by his monastic name Brother Marie-Alberic.   In fact it is a prayer which he puts on the lips of Jesus and which cannot be said by anyone but Jesus.   So it is only with Jesus that we can recite it.

If it has become such an important prayer for the members of his Spiritual Family, it is then, because they are aware that we can never say it alone.   We pray it with Jesus.  With Jesus’ help, let us grow in this spirit of abandonment uniting ourselves to Him in his trusting abandonment to the Father.

This prayer invites us to unite ourselves to Jesus.   It seeks to trace a path for our life’s journey with God and with humanity.   It is the path which Jesus travelled before us.   We are encouraged to give ourselves in confident abandonment to the Father.

St William neither founded a Religious Order nor wrote a Rule of life.   But two of his followers formed the Order of Saint William, also known as Williamites, shortly after William’s death.   One of them, named Albert, composed a Rule, which he entitled The Rule of St William.   He also wrote the life of St William, which sadly has been lost.

Little is known about the early life of William, who is thought to have been born in France.   His youth and young adulthood were spent in the army, living freely and licentiously, common among soldiers of that time period.   Through the grace of God, William came to understand the error of his ways and becoming penitent, made a pilgrimage to the tombs of the holy apostles in Rome.   There, he begged an audience with Pope Eugenius III and upon receiving it, implored the Holy Father for pardon and prescriptive penance for his sinfulness. 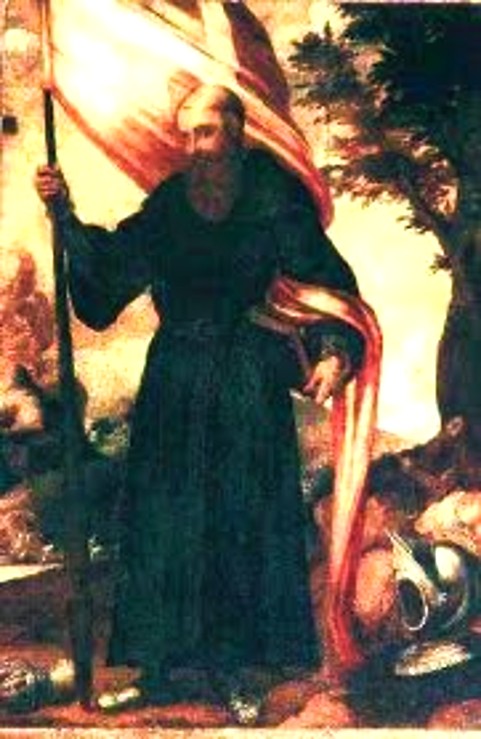 Pope Eugenius encouraged William to make a pilgrimage to the Holy Land in 1145. William did as he was told and spent eight years journeying through the deserts of the Holy Land, visiting tombs, shrines, and holy places and communing with the desert hermits and learned scholars.   Returning to Rome a changed man, he embraced the eremitical life, becoming a hermit on the isle of Lupacavio (near Pisa) in Tuscany. Wishing nothing more than to live in solitude and contemplate the Lord’s mercy and forgiveness, William found himself besieged by pilgrims and those seeking his spiritual counsel and guidance.   He was convinced to lead and govern these pilgrims but found himself poorly suited for this task and failed to maintain discipline and austerity among the monks in his care.   Unable to bear this, he travelled to Monte Bruno, where the same situation repeated itself.   This time, he fared little better and organised the monks into an abbey.

Again, he withdrew from governing, realising that God’s plan for him was elsewhere.   He embraced life as a hermit at Maleval (near Siena).   There, he lived in an underground cave until a local lord built him a cell.   William kept company with the wild beasts of the region and foraged for his food.  He undertook extreme penances and austerities, in atonement for his earlier sinfulness.   Sleeping only on the bare ground, eating only uncooked foods he could gather and drinking limited amounts of water, he devoted his waking moments to prayer, contemplation and manual labour.   William also received the gifts of miracle-working and prophecy, for which he was frequently sought.

Saint William accurately predicted his death, on 10 February 1157 and he was buried by two disciples in his garden.   These disciples, Albert and Renauld, continued to live and study together according to Saint William’s example.   There numbers increased and they built a chapel and hermitage over their founder’s grave.   The order, the Hermits of Saint William, spread throughout Europe and were known as the “Bare-Footed Friars” and the Williamites.   Eventually, the order was incorporated into the Hermits of Saint Augustine but their tradition continues to this day.

St William’s cultus was confirmed, namely him Blessed by Pope Innocent III and Canonised by the same Pope in 1202.

Saint William’s life is marked by conversion, forgiveness and penance.   We are reminded that we have all sinned, sometimes gravely but that through the grace of God, we are made new and forgiven.   Throughout his life, Saint William never took the saving grace of the Lord for granted, spending his days in contemplation and wonder at the mercy and love of God.   We are called to do the same, recognising our own sinfulness and humbly and contritely asking the Lord for forgiveness.   Freed from the burden of our sins, like Saint William, we may find a world full of the beauty of God’s creation! 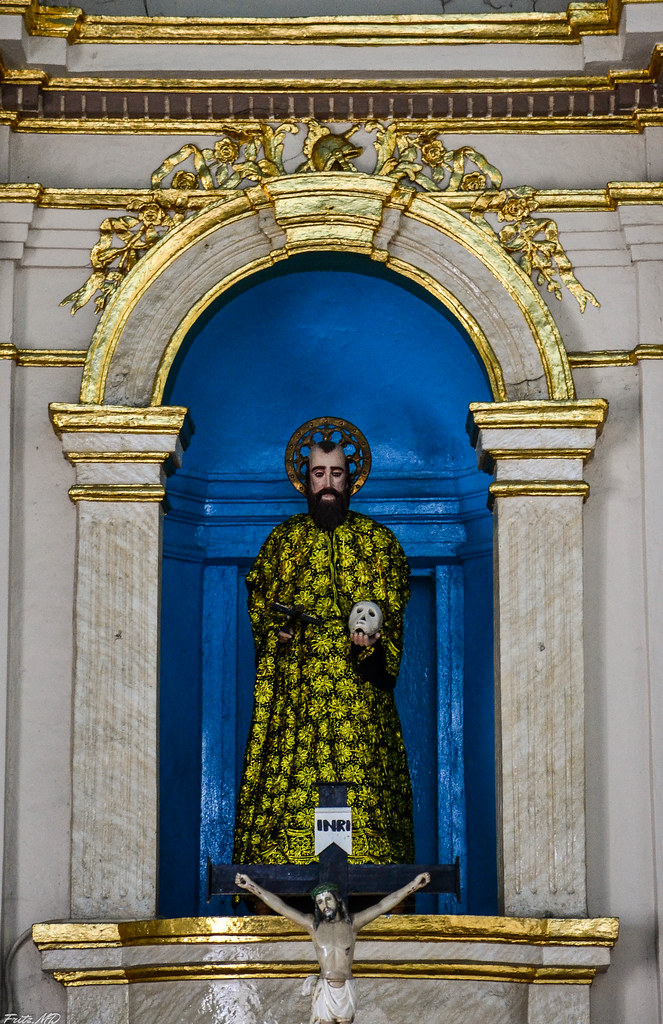