The Causes of Discontent 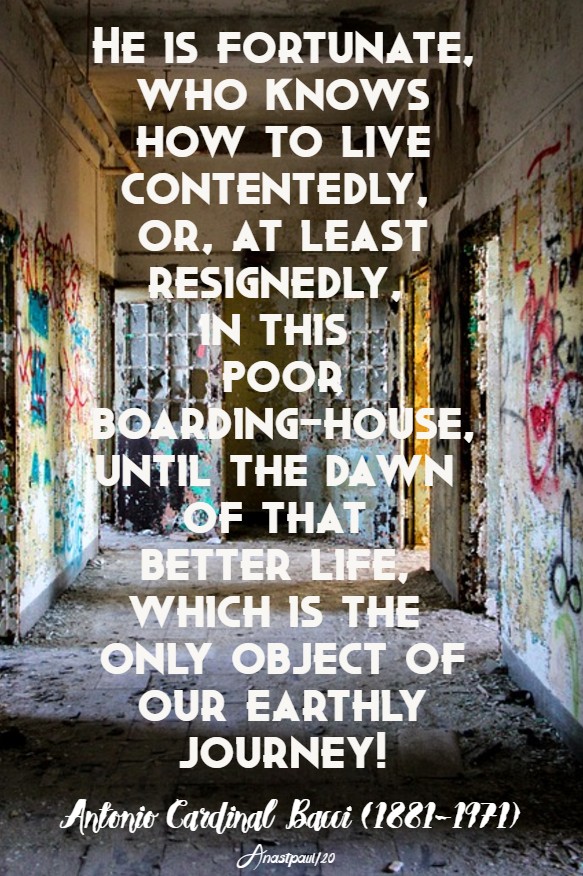 “It is hard to find anyone, in this world, who is really content.
Some grumble about poor health, others about not having enough to live on, others about an unsuccessful career.
Some complain about the lack of sympathy and the ingratitude of men, others, about constant temptation, spiritual dryness and the discouragement of frequently falling into sin.
Still others, are confined to a bed of pain for weeks, months or even years at a time.
There are some, too, who must endure mental suffering, which is greater than any physical pain.
Perhaps, they have lost a loved one, who was the centre of their own life upon earth, or perhaps they are suffering from a loss of reputation, the result of some calumny or of some moment of weakness, on their own part.
In short, this world can be compared to quote St Therese of the Child Jesus – to an unsatisfactory hotel, in which we must spend the night, while we are waiting for the breaking of an eternal day in which we shall be able to see God.
He is fortunate, who knows how to live contentedly, or, at least resignedly, in this poor boarding-house, until the dawn of that better life, which is the only object of our earthly journey!”

“Happiness is secured through virtue,
it is a good attained by man’s own will.”

Meeting a vagabond upon the road who feigned sickness and poverty, Blessed Jordan gave him one of his tunics, which the fellow at once carried straight to a tavern for drink. The brethren, seeing this done, taunted him with his simplicity:

‘There now, Master, see how wisely you have bestowed your tunic.’

‘I did so,’ said he,
‘because I believed him to be in want,
through sickness and poverty
and it seemed, at the moment,
to be a charity to help him.
Still, I reckon it better, to have parted
with my tunic than with charity.’

The Heart of Christ

This Heart lives on service.
It does not seek to glorify itself but the Father alone.
It does not speak of its love.
It performs it’s service so unobtrusively,
that it is almost forgotten, as we forget our heart under the stress of our affairs.
We think that life lives of itself.
No-one listens to his own heart, not even for a second —
his heart, that bestows life, hour after hour on him.
We have grown used to the slight tremor in our being,
to the eternal beating of the waves that from within us,
dash on the shore of consciousness.
We accept it as we do our destiny, or nature, or the course of things.
We have grown used to love.
And we no longer hear the tapping finger, that knocks day and night at the gate of our soul, we no longer hear this question, this request to enter.

~From Heart of the World 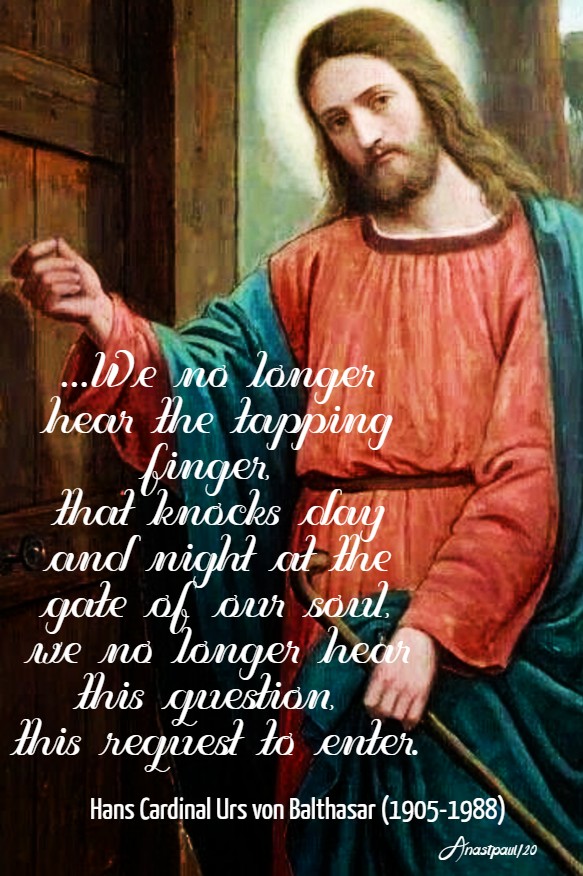 REFLECTION – “When she came up to Jesus the Canaanite woman just said these words: “Have pity on me” (Mt 15:22) and her repeated cries drew a large crowd of people.   It was a touching sight to see this woman crying out with such great feeling, a mother pleading on behalf of her daughter, a child who was so severely possessed. (…)   She didn’t say: “Have pity on my daughter” but “Have pity on me.”   “My daughter is not aware of her plight but I, I experience sufferings in profusion, it makes me ill to see her in such a state, I am almost out of my mind at seeing her like this.” (…)

Jesus answered her:  “I was sent only to the lost sheep of the house of Israel ” (Mt 15:24)      Now what did the Canaanite woman do when she heard these words?   Did she lose heart? Not in the least!   She urged him even more.   This is not what we do when our prayers are not answered – we turn away in discouragement, whereas, we ought to be pleading even more insistently.   Who, it is true, would not be discouraged by Jesus’ response?   His silence would have been enough to take away all hope. (…)   This woman, however, does not lose heart, on the contrary, she comes nearer to Him and bows to the ground, saying:  “Lord, help me” (v.25) (…)   If I am a little dog in this house then I am no longer a foreigner.   I well know that food is necessary for children (…) but it cannot be forbidden to give away crumbs.   They should not be refused me (…) because I am a little dog who cannot be pushed aside.”

It was because he foresaw her answer that Christ delayed to grant her prayer (…)    His replies were not intended to cause this woman pain but, to reveal this hidden treasure.” … St John Chrysostom (347-407) Father & Doctor of the Church – Homilies on Saint Matthew’s Gospel, no.52, § 2 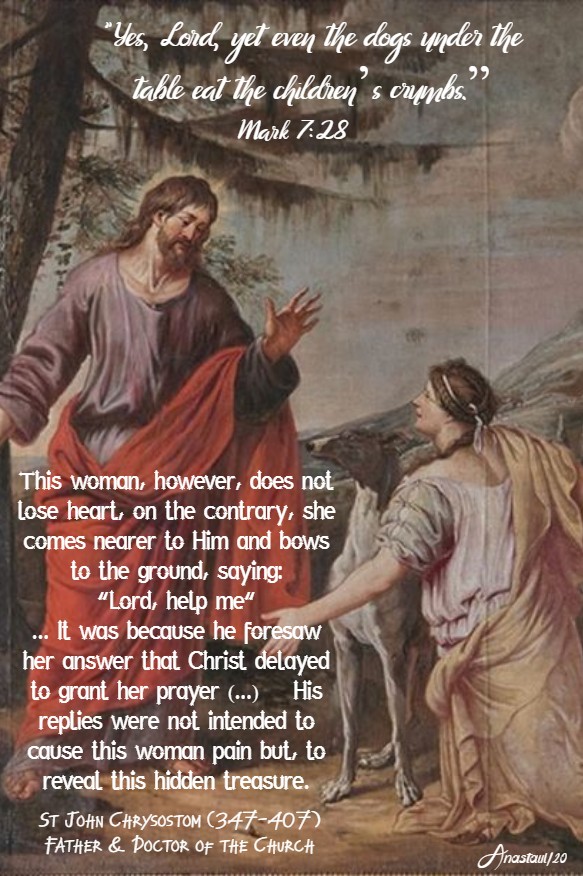 PRAYER – Lord support us as we pray, protect us day and night.   Grant us the grace of total trust and teach us to hear Your Voice and do Your Will.   May the prayers of Blessed Archangela Girlani (1460-1494), help us and strengthen us that we may grow in worthiness to receive Your grace.   Through our Lord Jesus Christ in the unity of the Holy Spirit, one God forever, amen.

Our Morning Offering – 13 February – Thursday of the Fifth Week of Ordinary Time, Year A

Most kind Jesus, grant me Your grace, I pray,
let it dwell in me, work in me
and abide in me to the end.
Grant me always to will
and desire, whatever is most pleasing
and acceptable to You.
Let Your will be mine
and let my will ever follow
and be conformed wholly to Your own.
Let me ever will
and not will in union with Yourself
and be unable to will otherwise
than You will or do not will.
Grant that I may die to all things in this world
and for Your sake, love to be despised and unknown.
Grant me, above all else, to rest in You,
that my heart may find its peace in You alone,
for You are the heart’s true peace,
it’s sole abiding place
and outside Yourself, all is hard and restless.
In this true peace that is in You,
the sole, supreme and eternal Good,
I will dwell and take my rest.
Amen

The Imitation of Christ, Book 3, Chapter 15

Saint of the Day – 13 February – Blessed Archangela Girlani O.Carm (1460-1494) Virgin, Carmelite Nun, Mystic with the gift of levitation – born Elanor Girliani in 1460 at Trino, on Monte Ferrato in northern Italy and died on 25 January 1494 (aged 33) in Mantua, Milan, Italy.   Blessed Archangela founded a new Carmelite monastery in Mantua.   Her body is incorrupt. 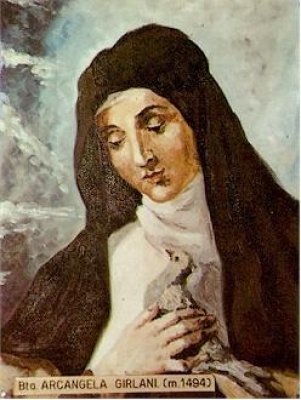 Eleanor Girlani was born in the small Italian town of Trino (Piedmont).   She demonstrated great piety and holiness as a child.   Despite her family’s noble heritage, her only ambition in life was to become a Benedictine sister and together with some friends and relatives, she prepared to travel to the monastery of Rocca delle Donne, who had agreed to accept and raise her as a member of the Order.   However, this was not to occur  . Upon mounting her horse to travel, the animal refused to carry her to the monastery.   As this particular horse was one of gentle and obedient spirit, the animal’s refusal to move was interpreted as a sign from the Lord and Eleanor returned home. Despairing, she prayed for guidance and contented herself in her own daily practices of contemplation, penance and service to others.

Eleanor soon encountered a Carmelite monk, who introduced her to the sisters of the Carmelite Order.   Understanding this as divine intervention, Eleanor sought admission, and was accepted into the Order on her seventeenth birthday.   She lived and served in the convent of Maria Maddalena in Parma, along with her sisters Mary and Scholastica.

Eleanor received the veil as a Carmelite sister at age eighteen, taking the name Archangela as her own.   She was made Prioress of the abbey, given her nobility (as was the custom of the time) and became a model of Christian virtue to her sisters.

Especially devoted to the Holy Trinity, Archangela spent hours in the chapel praying and contemplating the divinity of the Lord.

Sister Archangela soon was requested to found an additional abbey in Mantua, which was named Santa Maria del Paradiso (The Convent of Mary in Paradise).   There, under her direction, sisters of the Order lived as if already absorbed into heaven.   The monastery developed a reputation for great holiness, and received many new sisters.  As prioress, Archangela experienced great ecstasies, some lasting well over 24 hours and on more than one occasion was discovered by her sisters to be levitating above the ground while contemplating the Holy Trinity.  She further performed many miracles.

Only three years after founding the monastery at Mantua, Blessed Archangela fell gravely ill.   Strengthened with the Sacraments and with her eyes fixed on an image of the Crucified Christ, she repeated her frequently uttered words:  “Jesus, my Love” and peacefully died at the young age of thirty three.   In fulfilment of her desire, she was buried in the simplicity of a common grave at the monastery.   Three years later, when the tomb was re-opened to commit another sister to the earth, her remains were found incorrupt and exuding the fragrance of holiness.   Great miracles were reported and her relics were enclosed in a crystal tomb and placed above the alter at the monastery.

Nearly 300 years after her death, the monastery in Mantua was closed and Archangela’s relics were translated to Trino, where she had been born.   Her relics, still venerated today, were placed in the church of Saint Lorenzo.  There, her body rests, wearing the habit of Carmelites, in a casket of crystal.   Pope Pius IX confirmed her cultus and Beatified her on 1 October 1864.

The life of Blessed Archangela is one of deep faith and commitment to the Lord.   Willing to reconsider her own plans for those that the Lord placed before her, Archangela served and followed wherever the Holy Spirit led her.

Prayer
Father in heaven,
you gave the virgin Blessed Archangela Girlani
particular dedication to the mystery of the eternal Trinity.
Through her prayers
may we taste the delights of Your glory
already here on earth
and look upon You forever in heaven.
We ask this through Christ, our Lord.