The Early Hours of the Day

“Waking up in the morning, is like being raised to life again.
Sleep, which is necessary for the restoration of energy, is an image of death.
During those hours of sleep, it was as if you did not exist any longer.
Your mind was unconscious, your limbs inactive.
Now God gives you life once more and the strength to live it.
Your first thoughts, therefore, should be directed towards Him.
When the sun rises, all creation sings hymns of praise to God.
The flowers shake the night-dew from their petals and send up their perfume to their Creator.
The birds drawing their heads from beneath their warm wings, sing their morning canticles.
Now, man is master of the universe.
Therefore, he should gather together, these perfumes and these voices and offer them to God, along with the homage and adoration of his whole being.” 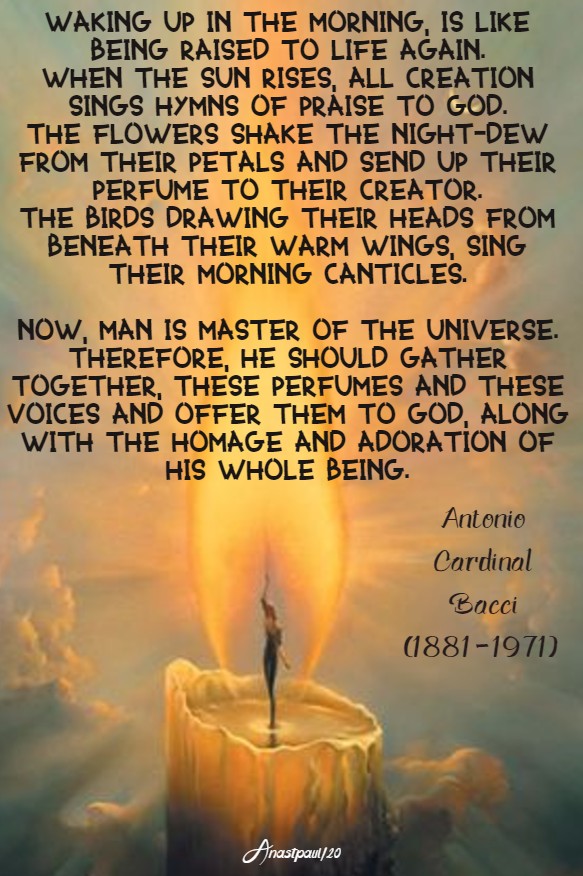 “Being Catholic
is my greatest calling,
I will not give up,
even if it means death.” 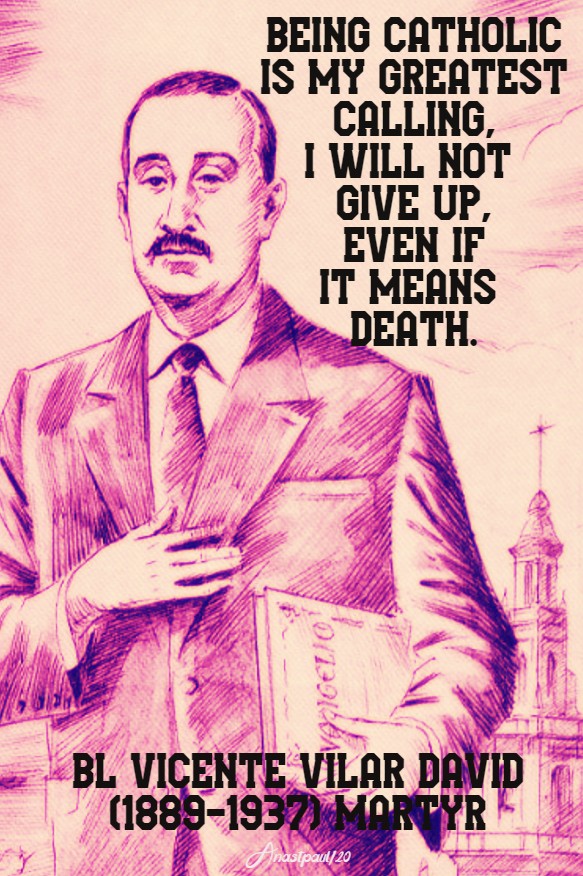 REFLECTION – “The Gospel relates the healing of a deaf-mute by Jesus.   For Him, this clearly has to do with more than a physical disability.   It is a parable for the people of Israel, who, in turn, represent all mankind.
As the prophets have said so often, Israel is hard of hearing when it comes to the Word of God, which, in turn, renders it incapable of giving a valid response.
Jesus does not make a spectacle out of His miracles.
Hence, He takes the sick man aside, seeking the middle line between entirely avoiding publicity and helping the people.
Physically touching both ears and tongue precedes His upward look toward the Father (in this miracle, the Father acts through Him) and His sign, which probably points to His having been filled with the Holy Spirit.
This trinitarian fullness, indicates that the prayer “Be opened!” speaks not only of physical healing but, of effective grace for Israel and for all mankind.” … Hans Cardinal Urs von Balthasar (1905-1988) 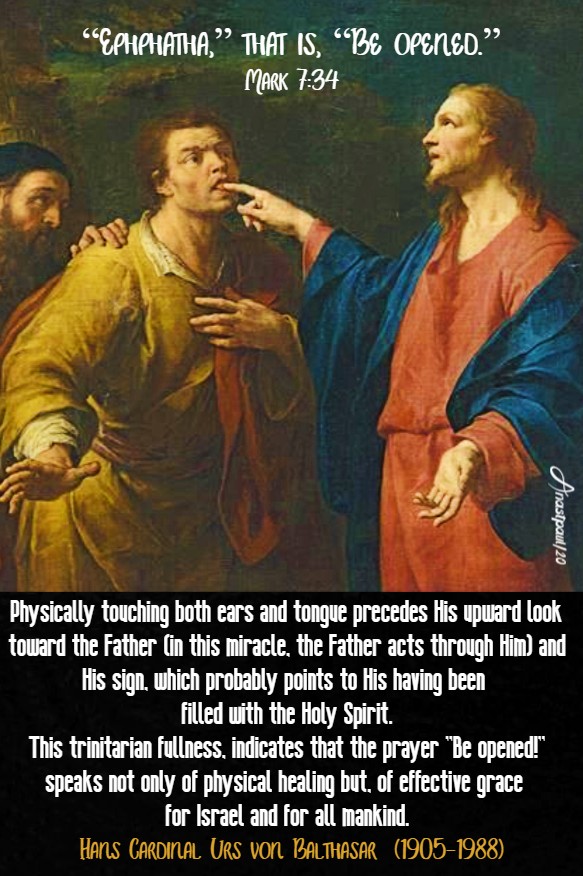 PRAYER – Almighty and merciful God, open the ears and eyes of our hearts and fill us with Your grace.   May we follow You in holiness all the days of our lives.   Grant we pray, that as You brought Your Martyr Blessed Vicente to overcome fearlessly, the persecutions of Your people, that we too may remain invincible under Your protection and by his prayers be strengthened against the snares of the enemy.   Through our Lord Jesus Christ, your Son, who lives and reigns with you in the unity of the Holy Spirit, one God, for ever and ever. Amen. 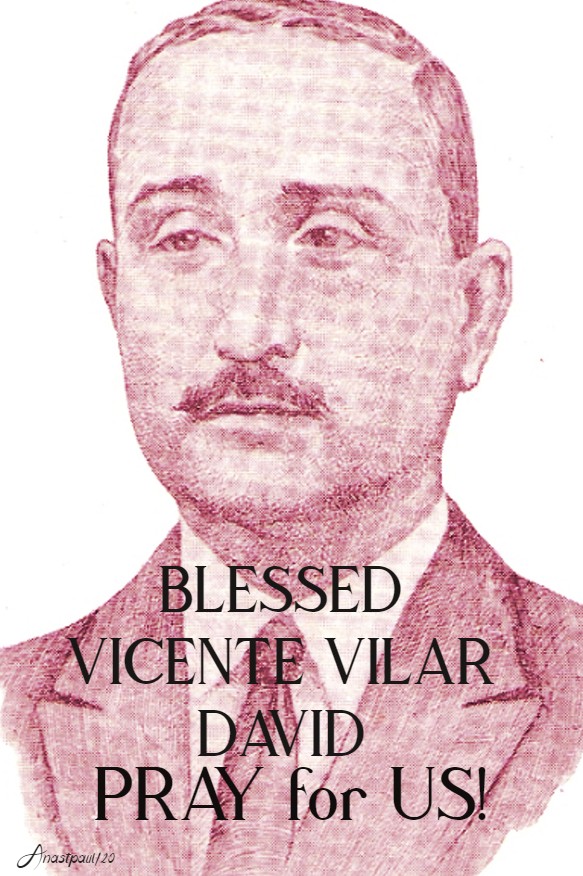 Our Morning Offering – 14 February – Friday of the Fifth Week in Ordinary Time, Year A

Dear Lord…
there is no certainty that my life
will be any easier in the years ahead
or that my heart will be any calmer
but, there is certainty
that You are waiting for me
and will welcome me home
when I have persevered
in my long journey to Your house.
Amen 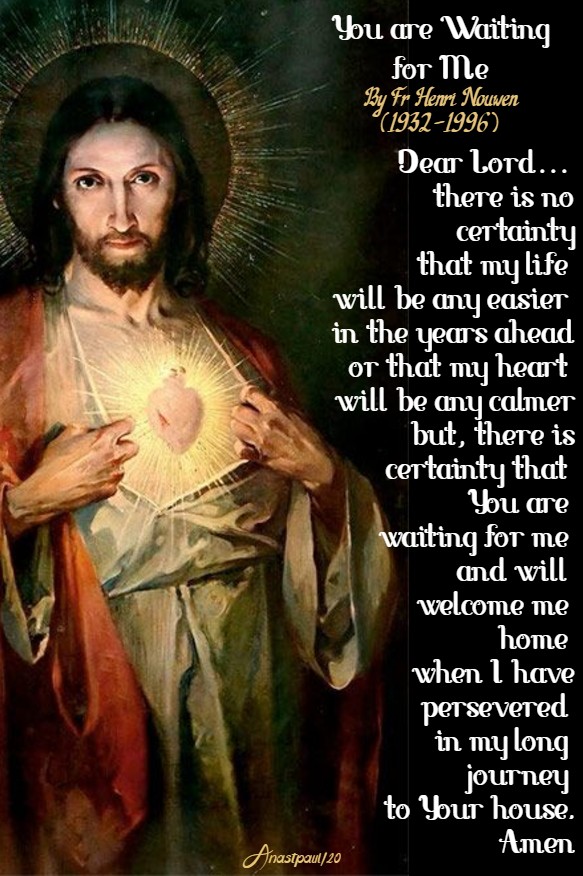 Saint of the Day – 14 February – Blessed Vicente Vilar David (1889-1937) Martyr, Layman, Social reformer, Worker for Justice and Peace, Apostle of Charity – born on 28 June 1889 in Manises, Spain and died on 14 February 1937 (aged 47) in Manises, by being shot to death.   Patronages – Manises, Persecuted Christians, Engineers.    As he was being taken away on the morning of 14 February 14, 1937, his wife called out to him and said, “See you tomorrow.” Vicente replied, “Until tomorrow or in heaven!” Minutes later he was shot to death. 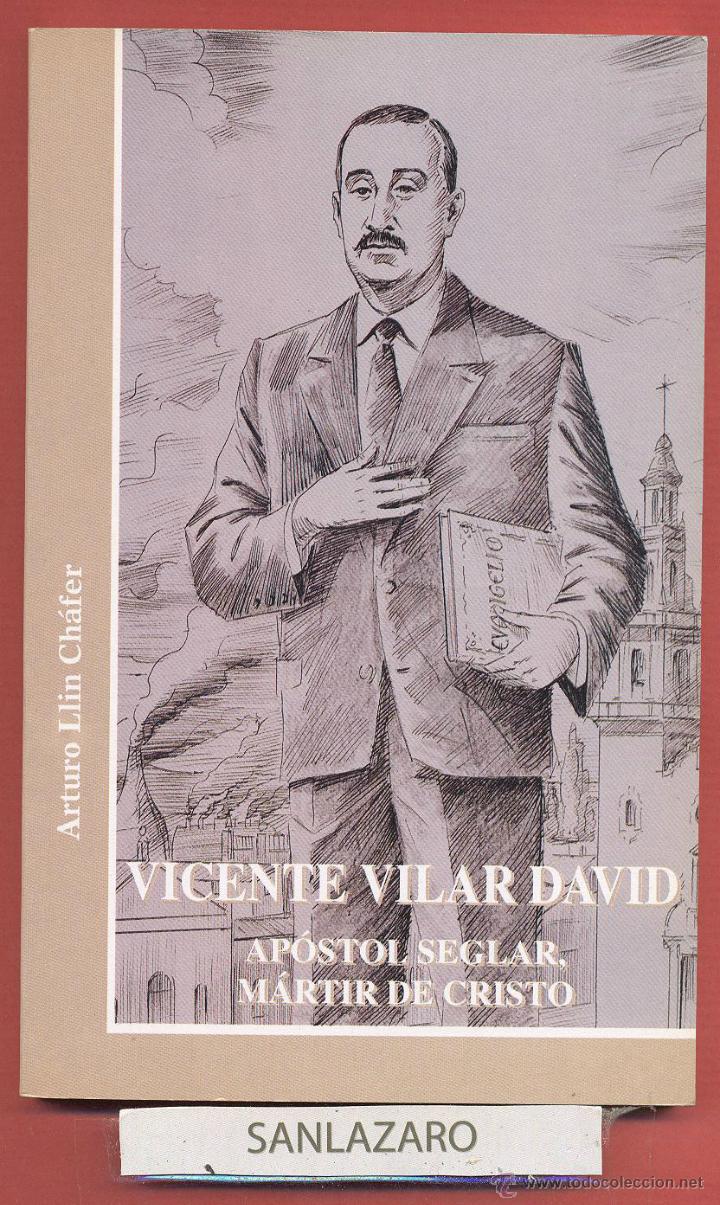 The youngest of eight children, Blessed Vicente was born to a ceramics manufacturer and his wife on 28 June 1889, in Valencia, Spain.   His parents were devoted to their Catholic faith and their children received a good Christian education.   After attending a school run by the Piarist Fathers, Blessed Vicente enrolled at a technical school and earned an industrial engineer’s degree.

At the aged of 33, Blessed Vicente married a young woman named Isabel (died 1993) and the two lived a model Christian life together.   Blessed Vicente became involved in his Parish, helping the Priests however he could.   He spread fundamental Christian morals among his fellow colleagues and was known for his deep commitment to charitable works in the name of the poor.   He served as an industrial engineer in his own ceramics farm that he had inherited and oversaw, with three of his brothers, after the premature death of their parents.   David also held several important municipal positions where he put the social teachings of the faith into full practice and was renowned for his deep commitment to fundamental values and traditional principles.   Youth organisations were also a forum for his work, as well as a range of parish activities. 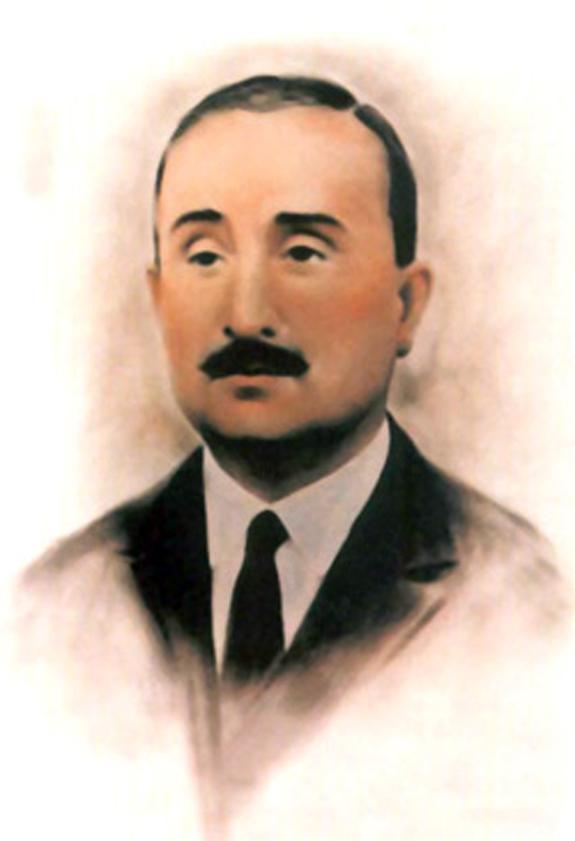 He also took over the management of his father’s ceramics factory.   His workers saw him, not only as their boss but also as a caring father.   He was concerned that they would be treated with the justice and dignity to which all workers have a right.

In the summer of 1936, the Spanish Civil War was at its peak in Valencia. ,,The persecution of Catholics and of the Church by the governing regime was also very intense.   Blessed Vicente, who had been teaching at a ceramics trade school, was fired because of his Catholic beliefs.   He bravely continued to encourage other Catholics and to give the Priests whatever support and help he could by protecting their whereabouts and hiding them in his home.

On 14 February 1937, he was called to appear before a tribunal and commanded to stop his activities on behalf of the Catholic Church.   Blessed Vicente replied that being a Catholic was his greatest calling and he would not give up, even if it meant death.   He was immediately sentenced to be executed.   He was permitted to see his wife and encouraged her with words of faith and conviction.   He publicly forgave his persecutors and enemies.   Then he was shot to death on the very same day he was arrested. 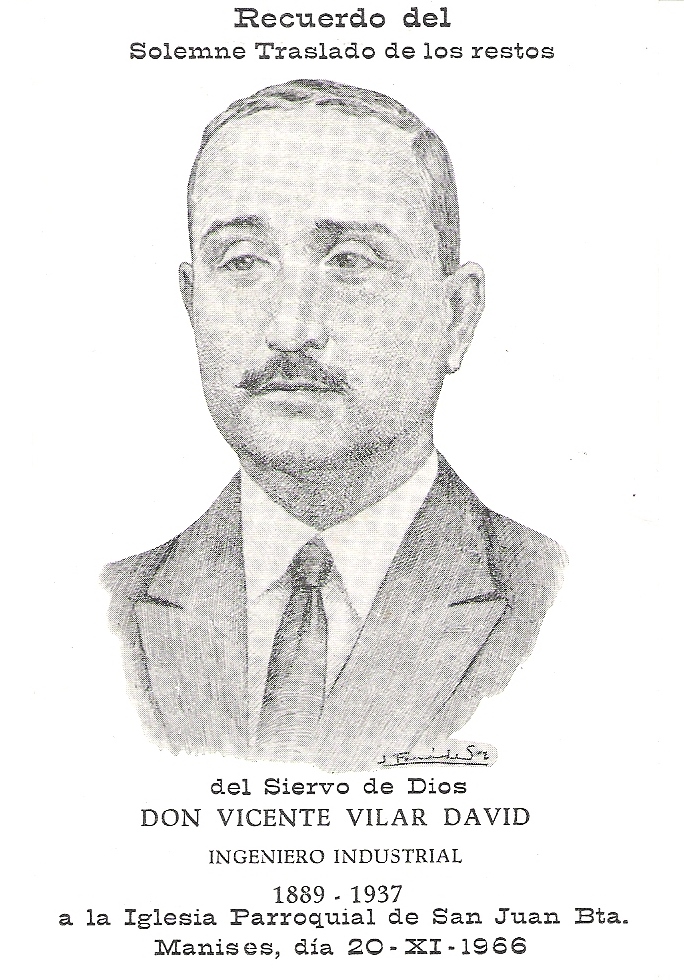 The ceramics factory workers were outraged.   In protest at Blessed Vicente’s execution, they went on strike for three days.   They told the socialist officials who tried to prevent their strike, “You have robbed us of our employer and our father.   Because he was prudent, kind and concerned for our working conditions, we not only respected him, we loved him.”

Blessed Vicente was Beatified on 1 October 1995 by St Pope John Paul II.   His death by violent hands was recognised as a true Martyrdom for the faith. 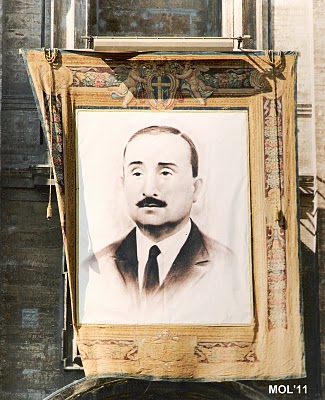 Our faith applies to every aspect of our lives.   In our family and social life, our time at school, our time spent working, we are called to put into practice the values that Jesus taught in the Gospel.

Martyrs of Terni: Three Christians who gave proper burial to Saint Valentine of Terni. Martyred in the persecutions of Aurelius.
273 in Terni, Italy – Apollonius, Ephebus, Proculus.

Martyrs of Alexandria: A group of Christians murdered in various ways for their faith in Alexandria, Egypt. We know the names and a few details about 16 of them – Agatho, Agatone, Ammonio, Ammonius, Antonius, Bassiano, Bassianus, Cirione, Cyrio, Dionysius, Dionysius, Lucio, Moses, Moses, Proto and Tonione.