Saint of the Day – 15 March – Blessed Artemide Zatti SDB (1880-1951) Italian Religious Brother of the Order of the Salesians of John Bosco, Missionary, Apostle of the poor sick, Pharmacist. Nurse – born on 12 October 1880 at Boretto, Reggio Emilia, in northern Italy and died on 15 March 1951 of cancer at Bahia Blanca, Argentina – Patronages Pharmacists and Immigrants.   His nephew was the eighth rector of the Salesians – Juan Edmundo Vecchi.

Blessed Artemide Zatti was born on 12 October 1880 in Italy and died on 15 March 1951 at Viedma, Argentina.    As a Salesian religious brother, he became a saint by running a hospital and pharmacy for the sick poor for 40 years in Viedma, Argentina.   In 1897, when Artemide was 17 years old, his family emigrated from Reggio Emilia to join Artemide’s uncle who had a good job in Bahía Blanca, Argentina.   There they found steady work and a livelihood.   In his “new life” in Argentina, Artemide worked in a
hotel and then in a brick factory.   On Sundays the Zatti family faithfully assisted at Mass and other activities in the parish of the Salesian Fathers who in 1890 set up a community in Bahía Blanca.   With true apostolic spirit, Artemide used his free time to help the Salesian parish Priest in his parish activities and, especially, in visiting the sick.

He was inspired by the life of Don Bosco and by the Salesian priests and felt called to imitate him.   In 1900 when he was 19, the Salesians accepted him as a student for the priesthood  . But he had great difficulty with the studies since he had left elementary school long before.   Also, during the novitiate, Artemide contracted a severe case of TB from taking care of a young priest who was a TB victim.

In 1902 Artemide was forced to leave the house of studies to seek a cure in the pure air of Viedma, a city located high in the Andes.   Little did he realise that Viedma was going to be his city for the rest of his life.   Along with the healthy climate, in Viedma there was a hospital and pharmacy attached to the Salesian College run by Fr Evaristo Garrone, a priest and physician who was known for his empirical approach to medicine.   Fr Evaristo was also known for his trust in God’s Providence, he never turned away the poor who could not pay.   Under the guidance of Fr Garrone, Artemide made a promise to Our Lady, Help of Christians, that if she would obtain a cure for him, he would serve the sick poor for the rest of his life. When he was cured, he promptly continued his training as a Salesian religious brother.

In 1908 he was professed and began his mission alongside Fr Garrone.   When Fr Garrone died in 1911, Artemide was put in charge of the pharmacy and the hospital. He was a trained pharmacist, nurse, operating-room assistant, as well as juggler of finances and head of personnel.   He followed Fr Garrone’s rule that “he who has little, pays little and the one who has nothing pays nothing”.   In running the hospital, Artemide also depended entirely on Providence and the generosity of the people.   In his 40 years of dedicated service, he found in his religious life with its periods of prayer and community life the secret of balancing the daily tasks of administering the hospital and
pharmacy, taking care of patients inside and outside the hospital  . Despite the demands of the sick and the needs of the hospital, Artemide was known for his “Salesian joy”, a sign of his holiness for those around him.   He was “not only provider of medicine, but was himself a medicine for others by his presence, his songs, his voice …”

In 1913 he was the force behind the building of a new hospital which was demolished in 1941 when the spot was taken as the residence of the Bishop of the newly-founded Diocese.

In July 1950, after falling off a ladder that he was climbing to get on the roof to fix a leaky water tank, Artemide was forced to take a period of rest and recovery.   After a few months the doctors diagnosed his livid skin colour as a serious cancer of the liver.  He was sick from January to March.   He died on 15 March 1951.  His mortal remains repose in the chapel of the Salesians at Viedma.

Bl. Artemide lived what St John Bosco said to the first Salesians leaving for America: “Take special care of the sick, the children, the elderly, the poor and you will receive God’s blessing and the respect of those around you.”

The process for investigating a miracle opened in Buenos Aires after Jorge Mario Bergoglio – the future Pope Francis – inaugurated the process on 14 April 1998 and closed it one month later on 14 May 1998.   A medical board approved the miracle on 9 March 2000 and theologians followed this decision on 27 October 2000.   The C.C.S. voted in favour as well on 6 February 2001 which led to papal approval on 24 April 2001. Blessed Artimedi was Beatified by St John Paul II on 14 April 2002 in St Peter’s Square….Vatican.va

“Artemide Zatti, Salesian religious brother, left the diocese of Reggio Emilia with his family to seek a better life in Argentina, the land dreamt of by Don Bosco.   There he discovered his Salesian vocation, which took the form of a passionate, competent and loving service to the sick. His almost fifty years in Viedma represent the history of an exemplary religious, careful to accomplish his duties in his community and totally devoted to the service of those in need.   May his example help us to be conscious of the presence of the Lord and bring us to welcome him in all our needy brothers and sisters.” – from the beatification homily by Pope John Paul II

The postulator of the cause is the Fr Pierluigi Cameroni and there is currently a miracle being investigated through the intercession of Blessed Artemide which would lead to his Canonisation:

“Indeed the first miracle for the Beatification happened in 1980 to that time Salesian theology student Carlo Bosio (later on SDB provincial) and was the motivation for the Beatification of Br Zatti by St John Paul II in 2002.   Now another presumed miracle is being investigated in the Philippines (Diocesan stage of the investigation) and it looks very serious (according the reports from the Philippines).

Possible canonisation of Br Zatti would remind the whole Catholic community worldwide about the love for the poor, showing all the way how to meet Jesus in the sick people:  ‘Please, prepare the clothes for 12 year old Jesus! or Do you have ready the hot soup for 10 year old Jesus?’

We wish all Salesian family members both in Patagonia – Viedma and in the Philippines that the investigation about the presumed miracle, will bring many pastoral fruits for the growth in faith and charity amongst the Catholic community and beyond.” (by Salesian Sr Denise Sickinger). 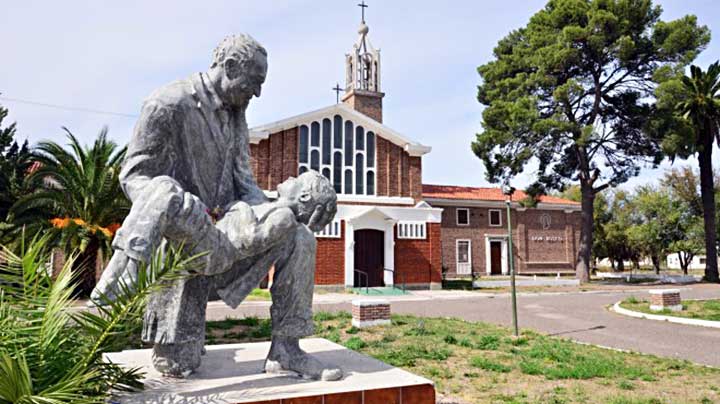