The Death of our Saviour

In the midst of His sufferings, Jesus forgets Himself and pray for His executioners.
“Father,” He pleaded, “forgive them, for they do not know what they are doing” (Lk 23:34).
Who were these people who crucified Him?
We know well that they were not only the Jews but all of us.
The prophet Isaiah, had foretold this.  “He was wounded for our iniquities, he was bruised for our sins … He was offered because it was his own will…” (Is 53:5-7).
We are all the crucifiers of Jesus.   Therefore, He willed to suffer and to die for all of us and when He was hanging on the Cross, He begged for forgiveness for us all.
This should incite us to trust in God and to do repentance for our sins.
We should be sorry for our sins because, they were the real cause of the voluntary death of Jesus.
We should have confidence in Him, because, He forgave us when He was dying on the Cross and is ready to pardon us again, as long as we are sincerely repentant.

Let us consider how Jesus, even though He was derided and nailed to the Cross, prayed for and forgave His executioners.
How do we normally behave?
Perhaps we fly into anger at the first word of offence or act of misunderstanding, or perhaps we nourish secret feelings of hatred in our hearts for our brothers in Jesus Christ?
Let us kneel before the Cross and tell Our Lord, that we wish to be meek and humble of heart, like Him.
We wish to be quick to forgive and to live in peace and, even, if it is necessary, to do good to those who offend us, or at any rate, to pray fervently for them.

“Fear not, for I have redeemed you,
I have called you by name, you are mine.” 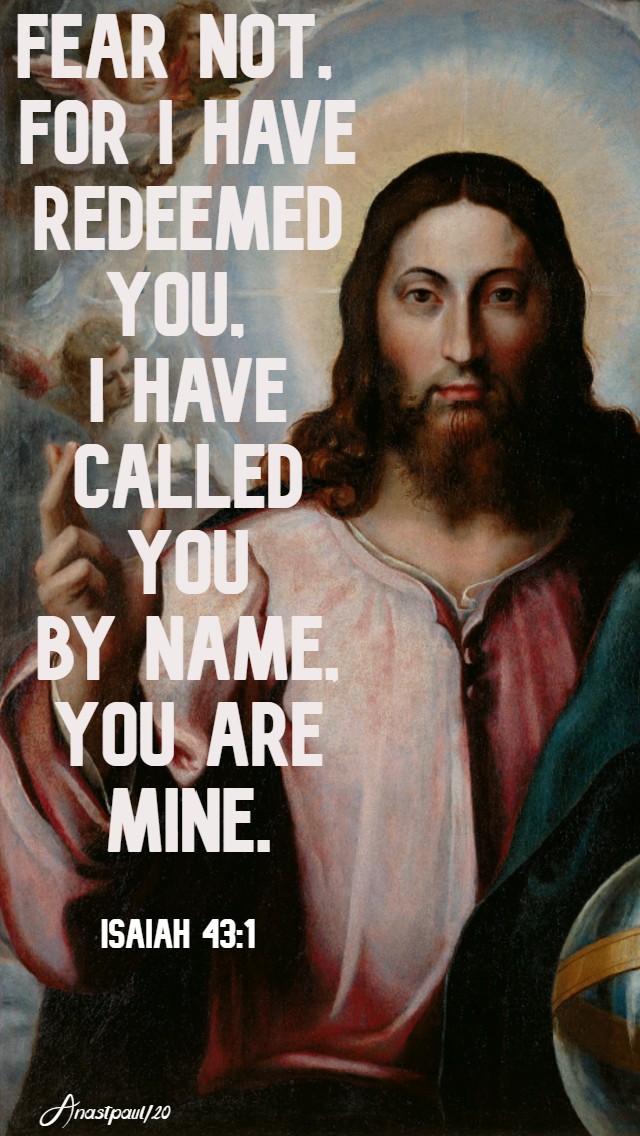 “Since love grows within you,
so beauty grows.
For love is the beauty of the soul.”

“He will be with you also,
all the way, that faithful God.
Every morning when you awaken
to the old and tolerable pain,
at every mile of the hot uphill dusty road of tiring duty,
on, to the judgement seat,
the same Christ there as ever,
still loving you,
still sufficient for you, even then.
And then, on through all eternity.” 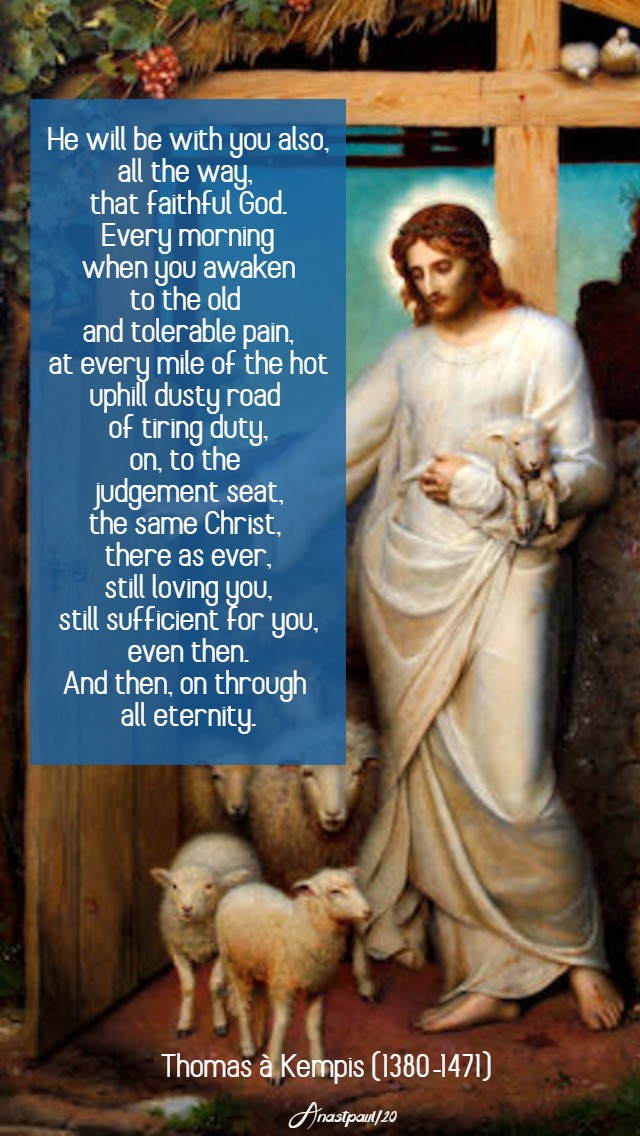 “Think of the Cross when you rise and when you lie down,
when you go out and when you come in,
when you eat and when you walk and when you converse,
when you buy and when you sell,
when you labour and when you rest,
consecrating and sealing all your doings with this one mental action –
the thought of the Crucified.
Do not talk of it to others – be silent, like the penitent woman,
who showed her love in deep subdued acts.
She “stood at His feet behind Him weeping
and began to wash His feet with tears
and did wipe them with the hairs of her head
and kissed His feet and anointed them with the Ointment.”
And Christ said of her,
“Her sins, which are many, are forgiven her, for she loved much
but to whom little is forgiven, the same loveth little.” [Luke vii. 38, 47.]”

“Mary –
the revolution of her life,
the revolution destined
to transform the existence
of every man and woman,
begins with a name
that echoes in the garden
of the empty tomb…”

Feast of St Mary of Magdala 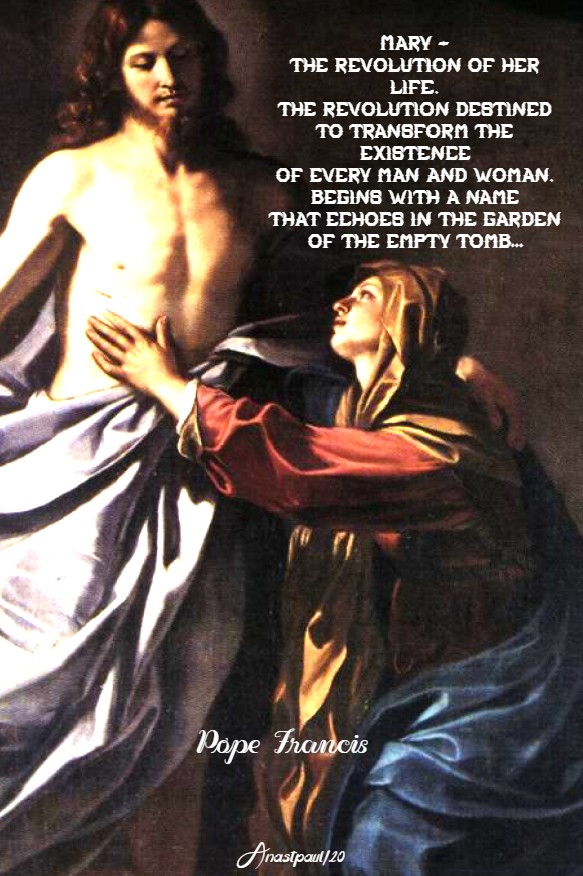 REFLECTION – “One question, however, continually arises at this point.   Not everyone saw the Risen Jesus.   Why not?   Why did He not go in triumph to the Pharisees and Pilate to show them that He was alive and to let them touch His scars?   But in asking such a question, we are forgetting that Jesus was not a resuscitated corpse like Lazarus and the boy of Naim.   They were allowed to return once more, to their erstwhile biological life, which sooner or later, would have to end, after all, with death.   What happened in Jesus’ case, was quite different – He did not return to the old life but began a new one, a life that is ultimate, no longer subject to nature’s law of death but standing in God’s freedom and hence final and absolute.   A life, therefore, that is no longer part of the realm of physics and biology, although it has integrated matter and nature into itself on a higher plane.   And that is why it is no longer within the ambit of our senses of touch and sight.   The Risen One cannot be seen like a piece of wood or stone.   He can only be seen by the person to whom He reveals Himself.   And He only reveals Himself, to the one whom He can entrust with a mission.   He does NOT reveal Himself, to curiosity but to LOVE;  LOVE is the indispensable organ if we are to see and approach Him.” … Joseph Cardinal Ratzinger (Pope Benedict XVI) – The Word of the Witnesses – Seek that Which is Above (1985)

PRAYER – Almighty, ever-living God, You gave our Saviour the command to become man and undergo the Cross, as an example of humility for all men to follow and showed the Grace of Your love for us.   We have the lessons of His suffering, grant us the grace of His love and the fellowship of His Resurrection.   May Mary, His Mother and ours, who after the pain and sorrow of the Cross, rejoiced in the glory of His Resurrection, intercede for us, that we may grow in true love of her Son and thus join in her rejoicing.   Through Christ our Lord, with the Holy Spirit, one God forever, amen.

O Lamb of God,
who takes away the sin of the world,
look upon us and have mercy upon us;
You who art Yourself, both victim and Priest,
Yourself, both Reward and Redeemer,
keep safe from all evil
those whom You have redeemed,
O Saviour of the world.
Amen 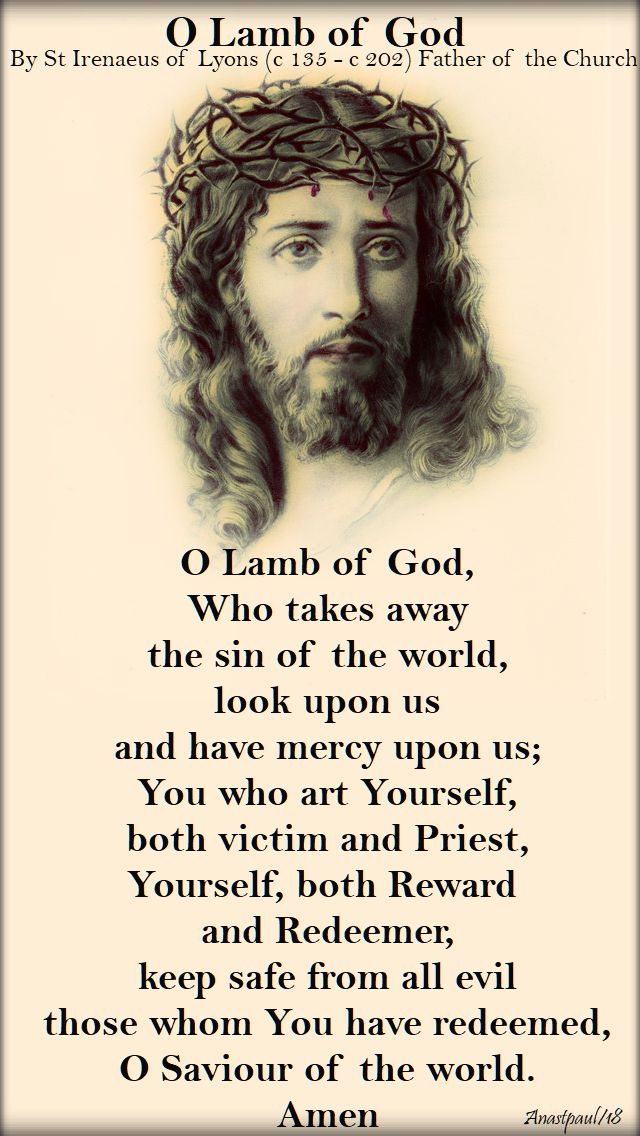 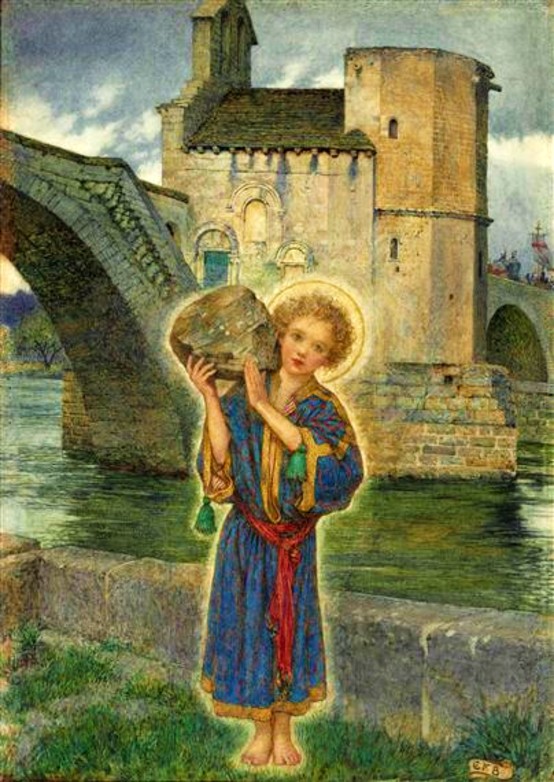 St Benezet, also known as Little Benedict the Bridge Builder, was born somewhere in the countryside of eastern or northeastern France.   As he grew up he tended his mother’s sheep.   Though uneducated and unskilled, gentle Benedict was a quiet, devout youth, thoughtful of others.

One day in 1177, while the sun was in eclipse, Benezet heard a voice, he believed was Jesus, commanding him three times to go to Avignon, where the Rhone current was especially swift and to build a bridge there.   He was also told that angels would watch over his flocks in his absence.

He obeyed the Divine order, without delay and reported immediately to the Bishop of Avignon.   Naturally, the Bishop was hesitant about accepting the word of the frail teenager.   But little Benezet lifted a massive stone to begin the work and announced that it would be the start of the foundation.   This would become the Pont Saint-Bénézet.   Thus he succeeded in convincing the Bishop that the construction of the bridge would be an act of true Christian charity.   Permission was granted and the youth set about his task.   According to the legend, there were shouts of “Miracle! Miracle!” when Bénézet had lifted and laid that first huge stone.   Eighteen miracles occurred in total during the project – the blind had their vision restored, the deaf could hear again, cripples could walk and hunchbacks had their backs straightened.

For the next seven years Benedict worked hard on the project and around 1181 he won support for his project from wealthy sponsors who formed themselves into a Bridge Brotherhood to fund its construction.   This was a religious association active during the 12th and 13th centuries and begun in Avignon but by it’s inspiration, it spread across Europe and whose purpose was building bridges, especially to assist pilgrims.   It was customary for a bishop to grant indulgences to those who, by money or labour, contributed to the construction of a bridge.   They also maintained and/or built hospices at the chief fords of the principal rivers, besides building bridges and looking after ferries.   The Brotherhood consisted of three branches– knights, clergy and artisans, where the knights usually had contributed most of the funds and were sometimes called donati, the clergy were usually monks who represented the church and the artisans were the workers who actually built the bridges.   Sisters are sometimes mentioned as belonging to the same association.   In addition to the construction of bridges, the brotherhood often attended to the lodging and care of pilgrims and travellers and the collection of alms, in this area, the sisters were most active.

In 1184, sadly, young Benezet died, some four years before the great stone bridge at Avignon was completed.   The wonders that occurred during the bridge’s erection and the miracles wrought at the Bridge Builder’s tomb convinced the people of Avignon that the young man was a Saint and he was referred to as such as early at 1237.   They, therefore, built a Chapel on the “Bridge of St Benezet” to enshrine his relics  . There the body was venerated until 1669, when floodwaters carried away a large segment of the bridge.   His remains were rescued from the flood and on examination, were found to be incorrupt.   Now they repose in the local church of St Didier.

Understandably, bridge builders adopted little Benedict as their Patron Saint.   The remains of the bridge still remain a pilgrimage site.  Below are artworks and images showing the bride through the ages.   The last shows it as it is today, only about half is left and that half if filled with pilgrims.

St Benezet’s bridge has another claim to fame – it achieved worldwide fame through its commemoration by the song “Sur le Pont d’Avignon” (“On the Bridge of Avignon”).

One can build in a figurative as well as a literal sense.   Bishops, the pope in particular, are often called “pontiffs”, a title derived from the Latin word for “builder of bridges”. Building bridges between God and mankind is their special calling.   Our Lord Himself was a “pontiff” in the sense that He made his Cross a bridge, on which souls could enter heaven.   The beatitude “Blessed are the peacemakers” promises heaven to those who work for reconciliation, that is, “build bridges”.

Some persons labour to raise walls, or “iron curtains” to divide mankind.   Others labour to tear down the walls that divide, straighten the paths that connect, bridge the crevices that separate people.   Surely they come close to fulfilling the great commandment to love our neighbour as oneself.   St Benezet was one such.   He promoted the unity of God’s children.    Little St Benezet, Pray for us!

Tuesday of the Easter Octave +2020