Saint of the Day – 17 May – Blessed Antonia Messina (1919-1935) Virgin and Martyr, Laywoman – born on 21 June 1919 in Orgosolo, Sardinia, Italy and died on 17 May 1935, Ovadduthai, Orgosolo, Nuoro, Italy as a result of her injuries sustained during an attack with the purpose of raping her.   She attempted to fend off the would-be rapist and suffered 74 strikes with a stone before she died.   Patronages – Nuoro, Orgosolo, Rape victims, Martyrs. young Catholic woman.

Antonia was born in Sardinia, the second-born of ten children.   She was forced to leave elementary school, only after taking four years of classes, in order to take over the household duties from her mother, Grazia.   She often called Antonia “the Flower of My Life.”

Her mother developed a heart condition that precluded her from continuing to perform her domestic chores.   Grazia claimed that Antonia “never once went against me.”   Antonia was obedient and hard working.   She willingly and diligently performed her duties and took on responsibilities, as if she were already an adult.   For instance, she cooked, baked, cleaned, washed clothes, cared for the children, carried water into the house and gathered wood for baking.

When she was ten years old, she joined a youth group called “Catholic Action.”   She thought it was a beautiful experience and said that it “helps one to be good.”   She was well-liked by her peers and encouraged others to join Catholic Action (even on the day of her death) because they received spiritual benefits from good works and received good Catechesis.   It is no wonder, she renounced her personal pleasures and sacrificed her wants, for that of her family members needs and others.

After attending daily Mass one morning, while coming home from gathering wood in a forest with a friend, Antonia was attacked by a teenage boy, Ignazio Catigu, from behind. The attacker grabbed her by her shoulders and tried to force her to the ground while her friend screamed and ran for help.   Antonia managed to escape twice but was knocked down the third time and severely beaten on the head and face with a rock.   The last blow smashed her skull and disfigured her face.  Though mortally wounded, Antonia resisted the would-be rapist.   At autopsy, the doctors determined that Antonia’s body had not been sinfully violated.   Catigu was soon apprehended and on 27 April 1937 sentenced to death, the firing squad executed him on the following 5 August.

On 5 October 1935 the Catholic Action member, Venerable Armida Barelli OFS (1882 – 1952) – who had met Mesina once – met with Pope Pius XI and informed him, of Mesina’s activism and her murder.

The beautiful and virtuous, Antonia, died a Martyr of Holy Purity at age 15 (the attack was month before her 16th birthday) similar to St Maria Goretti who died at age twelve. St Pope John Paul II Beatified Antonia Mesina on Sunday, 4 October 1987 at St Peter’s and named her a Martyr “in defensum castitatis” “in Defence of Chastity.” 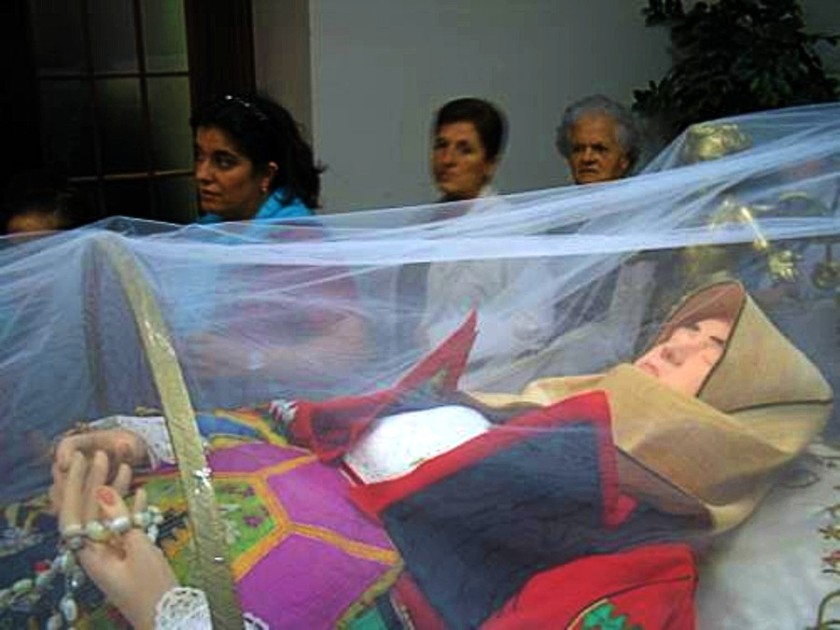