Quote of the Day – 11 August – Nineteenth Sunday in Ordinary Time, Year C and the Memorial of St Alexander of (Died c 251) “The Charcoal Burner” Bishop and Martyr

Men look upon clothes and the face,
But God looks at the soul and the heart.
Glorious Alexander, a charcoal-burner, was,
With the charcoal-burner, the body is blackened
And from soot, which water cleanses,
In the sinner, the heart is darkened
Which only the fire of faith can cleanse,
The fire of faith and the cry of repentance.
It is easier to cleanse the skin of a charcoal-burner
Than the blackened heart of a sinner.
Alexander, with humility, covered
In a cave concealed, as a hidden flame
For laughter, to the gullible world, he was.
The world did not see, Gregory saw,
With an acute spirit, the charcoal-burner discerned
And in him, found a saint,
In the dark cave, a beautiful flame,
Beneath the mask of insanity, great wisdom,
Beneath the dirty soot, a pure heart,
A royal soul in decayed rags.
That the light be hidden, the Lord does not permit,
At the appropriate time, the light proclaims,
For the benefit and salvation of men.
All is wonderful, what God judges!

Hymn of Praise of Saint Alexander, Bishop of Comana,
from the Prologue of Ohrid

Saint of the Day – 11 August – Saint Alexander of Comana (in Pontus, Turkey) (Died c 251) Bishop, Martyr, Preacher of renown – known as the Charcoal Burner – Greek born – died by being burned alive at Comana, modern Turkey, during the persecution of Diocletian. The saint’s curious name comes from the fact that he had, out of humility, taken up the work of burning charcoal, so as to escape worldly honours.   He is called a philosopher but it is not certain that the term is to be taken literally.   His philosophy consisted rather in his preference of heavenly to earthly things.   The discovery of his virtues was due to the contempt with which he had been regarded. 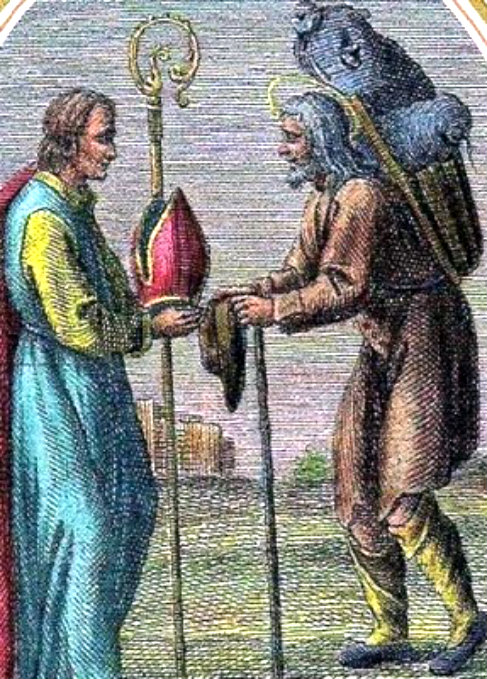 In the mid-third century the Christians of Comana, in Pontus, sent representatives to St Gregory the Miracle Worker or Thaumaturgus (c 213-c 270), Bishop of Neocaesarea, requesting a Bishop for their city.   So St Gregory went to Comana to look for a shepherd for the new Diocese.

A city commission had sought out candidates of noble birth, great eloquence, or other such qualities.   When all these were presented to him, St Gregory advised the commission that they should consider virtue first, and not despise those of more humble appearance.   One of these officials, deriding the counsel of St Gregory, replied: ‘If you don’t want one from among our most distinguished citizens, perhaps we should choose a Bishop from among the plebeians.   In this case, I counsel you to bring forth Alexander the charcoal-burner so that we can all acquiesce in the matter.’

St Gregory asked:  “Who is this Alexander?”   Laughing, they brought Alexander to him.

Because of the charcoal dust, his face, hands and modest clothing were black with dirt. The assembly laughed at seeing such a figure among the candidates for Bishop. Alexander remained self-composed, unembarrassed at his modest condition.   In fact, contrary to appearances, he was a gifted philosopher, a truly wise man.   It was not need that caused him to take up that profession but his will to practice a life of virtue removed from public admiration.   Young and handsome, he desired to live chastely avoiding occasions of sin.   The charcoal dust disguised his face and, like a mask, prevented his features from being noticed.   The work provided just enough for him to live and practice small works of charity.

St Gregory ordered Alexander to take a bath and put on his own episcopal robes.   In a short time, a completely different man appeared, attracting the attention of all who were assembled there.   St Gregory told them:  “Do not be surprised if you were fooled in your judgement, which you only made according to what you could see.   The Devil wanted to hide this vessel of election and keep him from being a Bishop.”

He consecrated Alexander as Bishop. In his first sermon, Alexander astonished the whole assembly with the wisdom and eloquence of his words.   An Athenian who was present criticized him for lacking Greek elegance but was reprehended.

St Alexander became famous for his preaching and governed the church of Comana in a dignified way until the persecution under Emperor Diocletian, when he was burned to death, dying a martyr for the Catholic Faith.

He would have been absolutely unknown were it not for a discourse pronounced by St Gregory of Nyssa, on the life of St Gregory Thaumaturgus, in which the election of Alexander is described.