Saint of the Day – 8 April – St Julie Billiat (1751-1816 aged 64) Virgin, Teacher and Founder of the   Congregation of the Sisters of Notre Dame de Namur – Patron against bodiy ills, poverty, and of the sick.

St. Julie Billiart was born in 1751, northern France, as the fifth of seven children.   She was very intellectual and had a great devotion to religious study;  Billiart memorised the catechism by the age of seven.    She was confirmed at the age of nine, four years before her colleagues.    She took a vow of chastity at the age of fourteen and became a teacher two years later.   A failed murder attempt on her father caused great stress for St. Julie. She became paralyzed at the age of 22 and was bed-ridden a few year’s later.   She spent most of her time in contemplation, catechising children and making linens for altars.

Julie Billiart was a born teacher. Already as a child she liked to teach catechism to her playmates in the village of Cuvilly, Picardy.    When her wealthy family slid into poverty, Julie had to work long hours but she always made time to instruct others in the faith. One day in 1774 someone fired a shot at her father.   The bullet missed, but the traumatic event plunged Julie into a mysterious illness and she was immobilized by a debilitating paralysis. From her bed, however, she continued to catechise the village children.

In 1790 a schismatic priest who had sworn loyalty to the revolution took over the Cuvilly church.   He tried to visit Julie but she refused to admit him.   And singlehandedly the invalid persuaded the entire village to boycott him.   She was very clear that no compromise with the state church was allowable or necessary, as she told a friend:

“You say it seems to you better to be schismatic rather than to be utterly without religion.    But my dear friend, you cannot have weighed the matter.    For, in conscience, we must not leave our brethren in error.    If they go to the instructions of an intruder, they are automatically out of the way of salvation. . . .

All those good people, who find it utterly impossible to get into touch with their legitimate pastors, will not be punished for it.   And it is better for them to remain all their lives without instruction, without Mass. . . .  God will send an angel from heaven to them rather than allow them to perish forever.”

Enraged by Julie’s opposition, revolutionary authorities sought to silence her, so she fled in a hay wagon and went into hiding.   At Amiens she met Frances Blin, a viscountess who became her friend and companion.    The women went to Bettencourt, where they taught catechism classes and restored the entire village to the practice of the faith.    Julie and Frances returned to Amiens where they founded the Institute of Notre Dame, a community of women dedicated mainly to the care and instruction of poor girls.    In 1804 during a novena, a priest exhorted Julie to take a step in faith and on the spot she was miraculously healed.    With her restored strength, Julie together with Frances spent her last years establishing fifteen Notre Dame convents throughout France.

In 1815, Mother Julie dedicated her time and resources to helping the wounded and starving survivors from the battle of Waterloo.    For the last three months of her life, she again suffered greatly.    She died peacefully on April 8, 1816 at the age of 64.    Julie was beatified on May 13, 1906 and was canonised by Pope Paul VI in 1969. 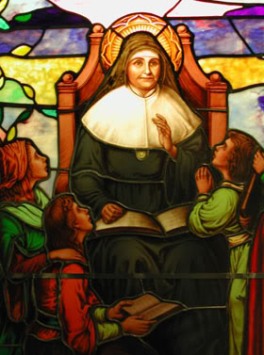