Work positively affects the worker’s family, the whole of society and the worker personally.   “It forms the person in the process of transforming things;  it humanises and spiritualises the person in the process of modifying material objects.   And finally, it draws men together in the purusit of a goal that is visible to all and in the construction of the world in which they are called to live” (Louis Lavelle).

Thus when a worker offers to God not only the firstfruits of his labour but his labour itself, human labour “can become a great liturgy of worship” (M D Philippe).

Glorious St Hoseph,
foster-father and protector of Jesus Christ,
spouse of the blessed Virgin Mary the Mother of God,
powerful protector of the Holy Church,
to you do I raise my heart and implore your powerful intercession.
You gave yourself completely to the Saviour,
it was cause for joy to pray, to work, to sacrifice yourself,
to suffer, to die for Him.
You were unknown in this world even though Jesus knew you very well,
He would look at your simple and hidden life with love.
We are called to contribute by our diligient industry
to the unfolding of the Creator’s plan in history.
Protect the rights of all workers.
Enable people to find work that befits their dignity.
Do not let those who are unemployed become discouraged
but them them in finding fitting employment.
May I too approach my work as an act of worship.
United in your powerful intercession,
I offer you my intentions
(make your intention)
I commend to your fatherly solicitude this specific task.
I am placing it in your hands.
I ask for the grace to never separate myself from God,
to know Christ ant love Him even more and His blessed Mother,
and to always live in the presence of God,
to do all for His glory and the good of other souls
and one day to reach the beatific vision of God
to praise Him eternally with you. Amen.

Thought for the Day – 23 April

The Christian hero is not the slayer of dragons or the knight who wields the sword.
The Christian hero is the saint, although saints like St Joan of Arc, could and did wield the sword too.
St George, whose Memorial it is today, got lost in legends and folklore but he was a real soldier who gave his life in witness to Christ.   He was a Martyr for Christ – the ultimate act of heroism.   If only we remembered him correctly and with honour, for this martyrdom for the One who saved us!

St George pray for us and we pray that your memory may be restored!

“There is nothing more man needs than Divine Mercy – that love which is benevolent, which is compassionate, which raises man above his weakness to the infinite heights to the holiness of God.” 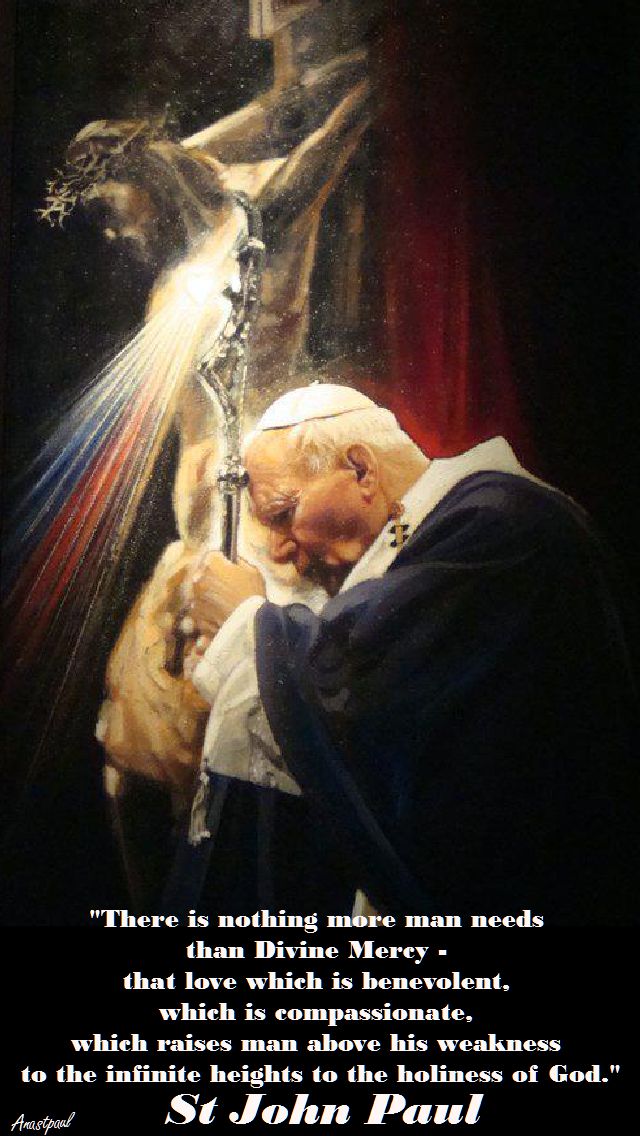 DAILY MEDITATION: Kindle the faith of your people and show us Your Mercy!

But you are “a chosen race, a royal priesthood, a holy nation, a people of his own, so that you may announce the praises” of him who called you out of darkness into his wonderful light.    Once you were “no people” but now you are God’s people; you “had not received mercy” but now you have received mercy………………..1 Peter 2:9-10

REFLECTION – “How much the world is in need of the mercy of God today!   In every continent, from the depths of human suffering, a cry for mercy seems to rise.   In those places where hatred and the thirst for revenge are overwhelming, where war brings suffering and the death of innocents, one needs the grace of mercy to pacify the minds and the hearts and make peace spring forth.   In those places where there is less respect for life and human dignity, one needs the merciful love of God, in whose light we see the ineffable value of every single human being.   Mercy is needed to ensure that every injustice may find its solution in the splendour of truth. …..As a gift to humanity, which sometimes seems bewildered and overwhelmed by the power of evil, selfishness, and fear, the Risen Lord offers His love that pardons, reconciles, and reopens hearts to love. It is a love that converts hearts and gives peace.   How much the world needs to understand and accept Divine Mercy!”…………St John Paul

PRAYER – “Lord, who reveal the Father’s love by Your death and Resurrection, we believe in You and confidently repeat to You today: Jesus, I trust in You, have mercy upon us and upon the whole world. Amen.” – St John Paul (During his last journey to Poland in August of 2002) St Adalbert of Prague pray for us!

YOU, WHO ARE RICH IN MERCY
By St Anselm of Canterbury (1033-1109)
Doctor magnificus (Magnificent Doctor);
Doctor Marianus (Marian Doctor)

My prayer is but a cold affair, Lord,
because my love burns with so small a flame
but You, Who are rich in mercy
will not mete out to them Your gifts
according to the dullness of my zeal
but as Your kindness is above all human love
so let your eagerness to hear me
be greater than the feeling in my prayers.
Do this for them and with them, Lord,
so that they may speed according to Your will
and thus ruled and protected by You,
always and everywhere,
may they come at last to glory and eternal rest,
through You who are the living and reigning God,
through all ages. Amen 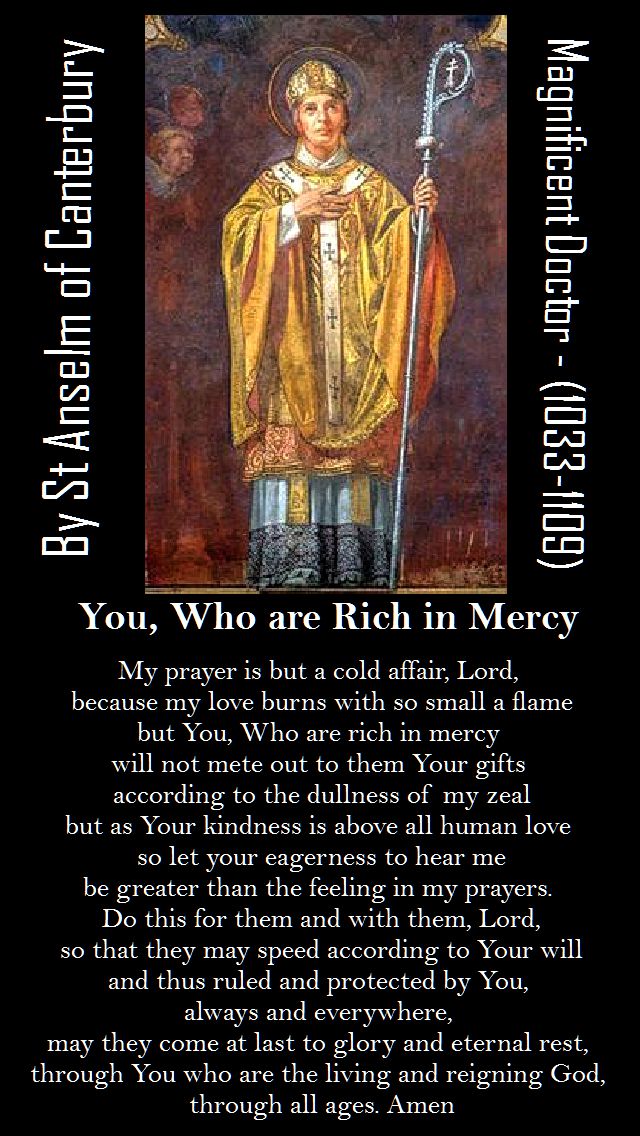 St Adalbert was born circa 956, in modern-day Czech Republic, with the given name of Vojtech.    He came from a large, noble family and was one of seven sons to Prince Slavnik.    Vojtech survived a serious illness as a child and was consecrated for service to God.    He studied in Magdeburg, under St Adalbert of Magdeburg and Vojtech took his mentor’s name at his confirmation.    The younger St Adalbert returned home and was Ordained a Priest and soon became Bishop of Prague at the age of 27.  Adalbert was consecrated as the Bishop of Prague just months after becoming a priest.   “It is an easy thing to wear the mitre and a cross,” Adalbert reflected, “but it is a most dreadful circumstance to have an account to give of a bishopric to the Judge of the living and the dead.”

Bohemia was still a mostly pagan area at the time and Adalbert condemned their practices of polygamy, idolatry and slavery.    He tried to protect a woman accused of adultery but was unsuccessful and the woman was killed.    St Adalbert excommunicated the murderers and was soon forced to exile in Hungary.    He was welcomed by King Boleslaw I and made bishop of Gnesen.    Here, he baptised St Stephen of Hungary and converted many pagans.

St Adalbert eventually resigned from the See to become a missionary in modern-day Poland.    He converted many and angered pagan priests in the process.    St Adalbert was Martyred in April of 997 and the king paid his weight in gold to have the body returned.

A few years after his Martyrdom, Adalbert was Canonised as St Adalbert of Prague.    His life was written in Vita Sancti Adalberti Pragensis by various authors, the earliest being traced to imperial Aachen and the Bishop of Liège, Notger von Lüttich, although it was previously assumed that the Roman monk John Canaparius wrote the first Vita in 999. Another famous biographer of St Adalbert was St Bruno of Querfurt who wrote a hagiography of him in 1001-4.

Notably, the Přemyslid rulers of Bohemia initially refused to ransom St Adalbert’s body from the Prussians who murdered him and therefore it was purchased by Poles.    This fact may be explained by the Saint belonging to the Slavniks family which was rival to the Přemyslids.    Thus St Adalbert’s bones were preserved in Gniezno, which assisted Boleslaus I of Poland in increasing Polish political and diplomatic power in Europe.

According to Bohemian accounts, in 1039 the Bohemian Duke Břetislav I looted the bones of St Adalbert from Gniezno in a raid and translated them to Prague.    According to Polish accounts, however, he stole the wrong relics, namely those of St Gaudentius, while the Poles concealed St Adalbert’s relics and consequently remain in Gniezno.    In 1127 his severed head, which was not in the original purchase according to Roczniki Polskie, was discovered and translated to Gniezno.    In 1928, one of the arms of St Adalbert, which Bolesław I had given to Holy Roman Emperor Otto III in 1000, was added to the bones preserved in Gniezno.    Therefore, today St Adalbert has two elaborate shrines in the Prague Cathedral and Royal Cathedral of Gniezno, each of which claims to possess his relics, but which of their bones are his authentic relics, is unknown.    For example, pursuant to both claims the Saint has two skulls.    The one in Gniezno was stolen in 1923.   However in the 1970s the relics in Prague, below, were examined by anthropologists and confirmed as belonging to St Adalbert.

The massive bronze doors of Gniezno Cathedral, dating from around 1175, are decorated with eighteen reliefs of scenes from the Saint’s life.    They are the only Romanesque ecclesiastical doors in Europe depicting a cycle illustrating the life of a saint and therefore are a precious relic documenting Adalbert’s martyrdom.

23 April 1997 was the one thousandth anniversary of St Adalbert’s martyrdom.   It was commemorated in Poland, Czech Republic, Germany, Russia and other nations. Representatives of Roman Catholic, Greek Orthodox and Evangelical churches travelled on a pilgrimage to the Saint’s tomb located in Gniezno.    St Pope John Paul II visited the Cathedral and celebrated a Liturgy there in which heads of seven European nations and approximately one million faithful participated.

A ten-meter cross was erected near the village of Beregovoe (formerly Tenkitten), Kaliningrad Oblast where St Adalbert is thought to have been martyred by the Prussians.