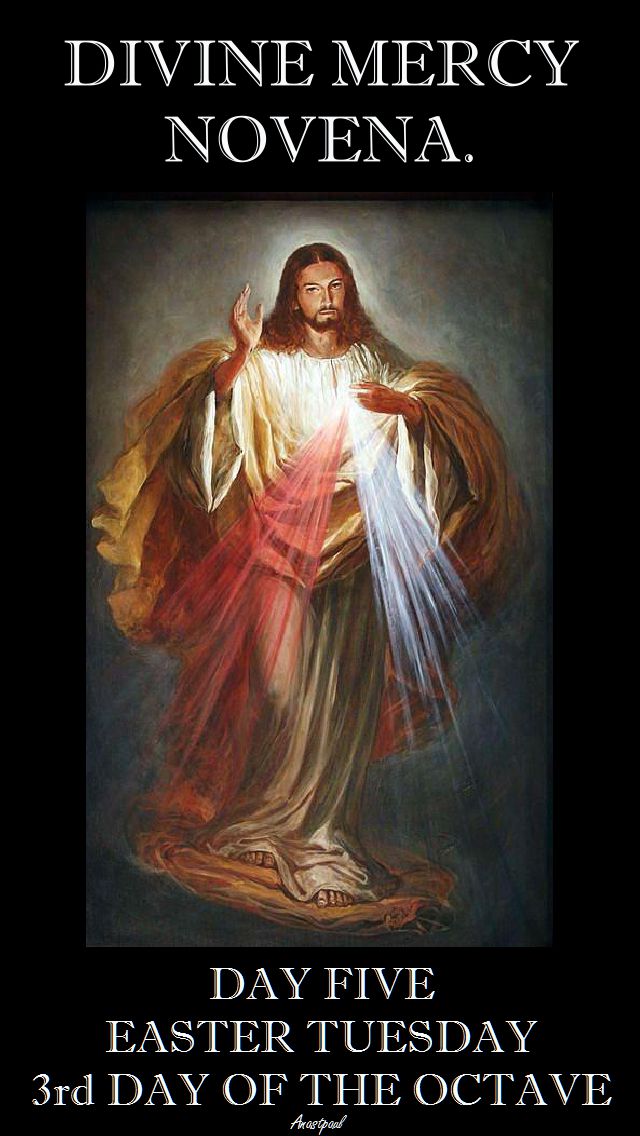 “Today bring to Me the Souls of those who have separated themselves from My Church*and immerse them in the ocean of My mercy.  During My bitter Passion they tore at My Body and Heart, that is, My Church. As they return to unity with the Church My wounds heal and in this way they alleviate My Passion.”

Most Merciful Jesus, Goodness Itself, You do not refuse light to those who seek it of You. Receive into the abode of Your Most Compassionate Heart the souls of those who have separated themselves from Your Church.   Draw them by Your light into the unity of the Church and do not let them escape from the abode of Your Most Compassionate Heart; but bring it about that they, too, come to glorify the generosity of Your mercy.

Eternal Father, turn Your merciful gaze upon the souls of those who have separated themselves from Your Son’s Church, who have squandered Your blessings and misused Your graces by obstinately persisting in their errors.   Do not look upon their errors but upon the love of Your own Son and upon His bitter Passion, which He underwent for their sake, since they, too, are enclosed in His Most Compassionate Heart.   Bring it about that they also may glorify Your great mercy for endless ages. Amen.

*Our Lord’s original words here were “heretics and schismatics,” since He spoke to Saint Faustina within the context of her times.   As of the Second Vatican Council, Church authorities have seen fit not to use those designations in accordance with the explanation given in the Council’s Decree on Ecumenism (n.3).   Every pope since the Council has reaffirmed that usage.   Saint Faustina herself, her heart always in harmony with the mind of the Church, most certainly would have agreed.   When at one time, because of the decisions of her superiors and father confessor, she was not able to execute Our Lord’s inspirations and orders, she declared: “I will follow Your will insofar as You will permit me to do so through Your representative. O my Jesus ” I give priority to the voice of the Church over the voice with which You speak to me” (497).   The Lord confirmed her action and praised her for it.

Thought for the Day – 18 April

When we read biographies of the great saints and heroes who sacrificed their lives to build and cultivate Christianity in the far corners of the globe, we might wonder how they ever did it.   How could they give up their comfortable place in civilised countries to come to this mostly uncivilized lands?    Undoubtedly it was love… love of God, love of man and love for souls.    St Marie of the Incarnation well knew her responsibility before God for the souls of others.    She was a woman who loved immensely, first God and then her fellow man.    She was a wife and mother, a religious and mystic, a teacher and a missionary.   But perhaps Bishop Laval (St Marie’s Bishop and Spiritual guide) sums up best, the holy life of Marie of the Incarnation.   He wrote: “Having chosen her to establish the Ursulines in New France, God gave her the full spirit of her Institute.   She was a perfect Superior, an excellent Mistress of Novices, capable of undertaking any religious enterprise. Her exterior life, simple and well disciplined, was animated by an intense interior life, so that she was a living Rule for all her Community.   Her zeal for the salvation of souls, especially for the conversion of the Indians, was great and so universal that she seemed to carry them all in her heart.   We cannot doubt that, by her prayers, she greatly called down God’s many blessings upon the newborn Church.”

St Marie lived for God – she put Him first and everything else fell into place – THIS is the way – and we know it!

St Marie of the Incarnation, pray for us.

“The saints, are not supermen, nor were they born perfect.
They are like us, like each one of us. They are people who,
before reaching the glory of heaven, lived normal lives
with joys and sorrows, struggles and hopes.
What changed their lives?
When they recognised God’s love, they followed it with all
their heart without reserve or hypocrisy. They spent
their lives serving others, they endured suffering and adversity
without hatred and responded to evil with good,
spreading joy and peace. This is the life of a saint.”

Daily Meditation: You give us the freedom of the children of God.

REFLECTION – “Throughout the history of the living, the origins of anything new have always been small, practically invisible and easily overlooked.   The Lord Himself has told us that “heaven” in this world is like a mustard seed, the smallest of all the seeds (Matthew 13:31-32), yet contained within it are the infinite potentialities of God.   In terms of world history, Jesus’ Resurrection is improbable; it is the smallest mustard seed of history.

This reversal of proportions is one of God’s mysteries. The great – the mighty – is ultimately the small.   And the tiny mustard seed is something truly great.    So it is that the Resurrection has entered the world only through certain mysterious appearances to the chosen few.   And yet it was truly the new beginning for which the world was silently waiting.   And for the few witnesses – precisely because they themselves could not fathom it – it was such an overwhelmingly real happening, confronting them so powerfully, that every doubt was dispelled and they stepped forth before the world with an utterly new fearlessness in order to bear witness:  Christ is truly risen.“……………Excerpt from Jesus of Nazareth: Holy Week: From the Entrance Into Jerusalem To The Resurrection, by Joseph Ratzinger/Pope Benedict XVI, Chapter 9,

PRAYER – Lord God, give me the opportunity to recognise the healing power of love that has been offered me and that it really does fill these days with power.   Teach me to recognise Jesus alive and Jesus with me now.. Grant me freedom from fear, freedom for courageous love and service. Help me to understand the freedom You give us all as Your children. Amen 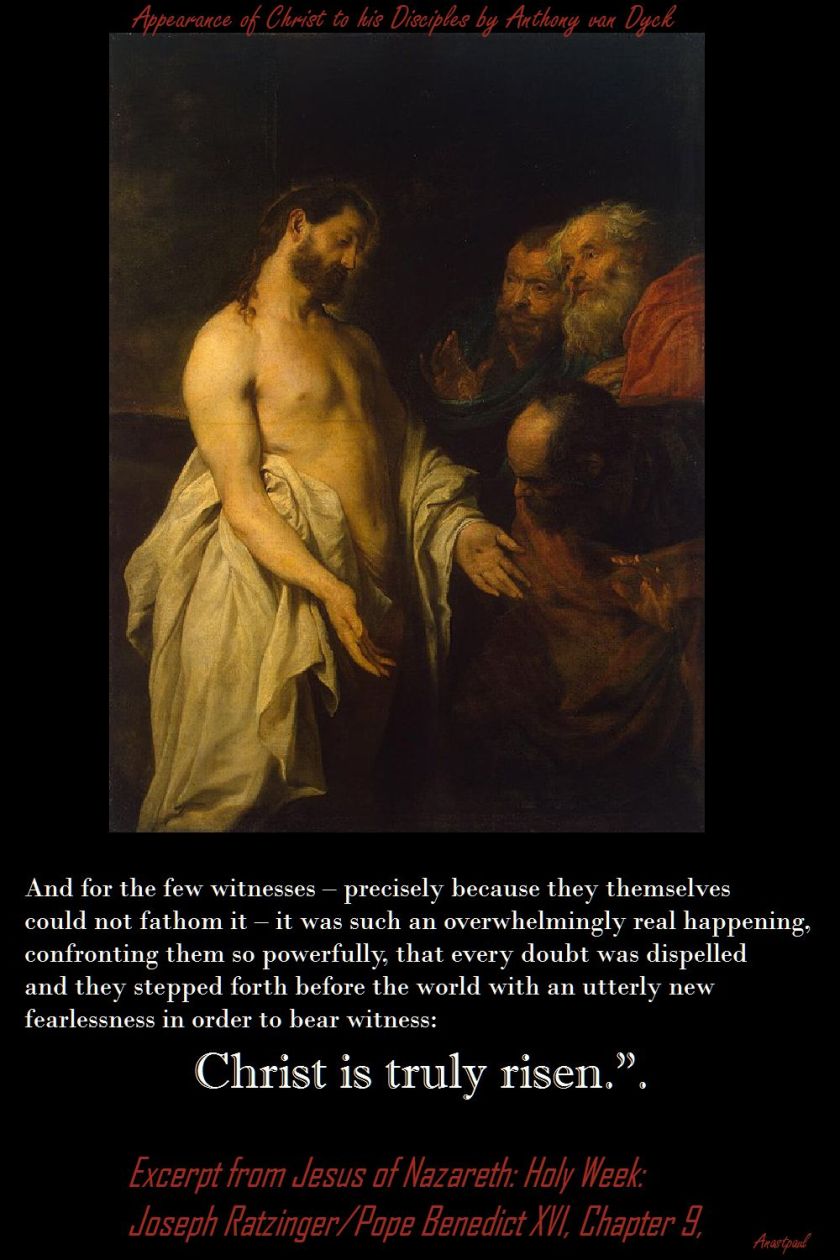 See, O merciful God, what return
I, Your thankless servant, have made
for the innumerable favours
and the wonderful love You have shown me!
What wrongs I have done, what good left undone!
Wash away, I beg You, these faults and stains
with Your precious blood, most kind Redeemer,
and make up for my poverty by applying Your merits.
Give me the protection I need to amend my life.
I give and surrender myself wholly to You,
and offer You all I possess,
with the prayer that You bestow Your grace on me,
so that I may be able to devote and employ
all the thinking power of my mind
and the strength of my body in Your holy service,
who are God blessed for ever and ever. Amen

Consecrated religious, widow, mother, Mystic, Missionary, Foundress of the Ursuline Order in Canada and the first school for girls’ in the new world – “The Mother of the Ursulines of New France” – Patron against against impoverishment, against loss of parents, against poverty of parents separated from children, poor people, widows – Beatified – June 1980, Vatican City, by Pope John Paul II – Canonised 2 April 2014 by Pope Francis.

Daughter of a baker, she was raised in a family of craftsmen and tradesmen and was related on her mother‘s side to the noble Barbon de la Bourdaisière family. nnA pious and sometimes mystical child, she would memorise and recite homilies and early wanted to become a nun.   Against her wishes, she entered an arranged marriage with Claude Martin, a silk manufacturer, at age seventeen, and was soon the mother of one son.   Widowed after two years of marriage, she moved back with her family, and refused to discuss re-marriage.   Worked as an embroiderer.

On 25 March 1620 she experienced a vision in which she was shown all her faults and human frailties, then was immersed in Christ’s blood.   This event changed her completely and her desire to be involved in religious life translated to prayer, liturgical devotion and charity.

Finally leaving her father‘s house, Marie worked as a bookkeeper in her brother-in-law’s shipping company.   Having a gift for administration, Marie was soon the company manager.   However, the drive to the religious life never ended and in January 1631 she asked her sister to care for her son Claude and then joined the Ursulines at Tours, France on 25 January 1631.   Claude gathered a group of his friends, all 12 or 13 years old, and tried to storm the convent to “free” his mother but they were unable to gain entry.   This incident has been often cited by her detractors as indicative of a serious flaw in Marie and even she did not wholly understand why she did what she did.   She later explained, however, that she was following God‘s will and Claude apparently came to understand it – he became a Benedictine priest in 1641, the assistant to his Order‘s superior general, and his mother‘s biographer.

Marie took her final vows in 1633 as Marie de l’Incarnation.   Assistant mistress of novices for the Order in Tours. Doctrinal instructor.   After a few years of this work, Marie received another vision that would change her life.   This time it was a huge country of mountains and forests and the message that it was Canada and that she must go there to build a house for Christ.   She worked for years to collect the money and support for her mission and in 3 April 1639 she sailed from Dieppe with Marie-Madeleine de la Peltrie, one of her primary supporters.

She landed in New France on 4 July 1639 and arrived in the future Québec, Canada on 1 August 1639.   She was the first superior of the Ursulines in Canada.   Worked as a missionary to the Natives and other residents in the area.   Studied the local languages with the Jesuits who were already in the area;  she became so proficient that she later wrote Algonquin, Iroquois, Montagnais and Ouendat dictionaries, and a catechism in Iroquois.

She laid the first stone of the convent in 1641 and took it over in 1642.   It formed the base for her work and when it burned on 29 December 1650, she supervised its reconstruction, finishing construction on 29 May 1651.   Ever strong-willed, she opposed bishop Blessed Francis de Montmorency Laval‘s attempt to control the Quebec Ursulines. A prolific correspondent, over 12,000 of her letters have survived.

On April 29th, Marie was feeling extremely sick and received the Last Rites but she could not die without again expressing her love for the dear little Indian and French girls, to whom she had devoted so many years of her life.   She insisted on having the French and Indian schol-boarders near her so that she might bless them for the last time.   The next day she lay unconscious, holding her crucifix in her hands.   At about six o’clock in the evening on April 30, 1672, Marie opened her eyes, sighed twice and breathed her last. 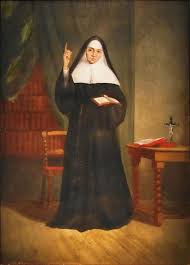