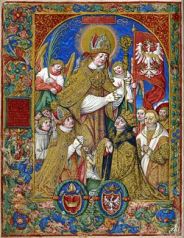 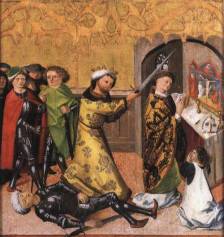 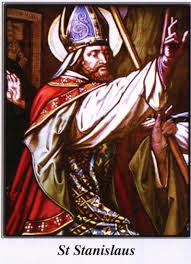 Stanisław Szczepanowski was born in 1030, southern Poland, the only son of a noble family.    At this time, Christianity was still new to Poland, having been introduced less than a century earlier.    He studied at the cathedral school of Gniezno, then in Paris and Liège. Stanislaus returned to Poland after his studies and was ordained a priest.    In 1072, the Bishop of Krakow died and Stanislaus was elected successor.   He was hesitant to accept but did after the command of Pope Alexander II and Stanislaus became the first Polish-born bishop.  (Image below:  1- Saint Stanislaus being ordained as bishop. 2- Saint Stanislaus resurrects Peter. 3-King Bolesław murders Saint Stanislaus. 4-Stanislaus’ body is cut in pieces. Image from the Hungarian Kings’ Anjou Legendarium of the 14th century)

St. Stanislaus bought a parcel of land for his diocese and the seller, a man named Piotr, died shortly thereafter.    Piotr’s family still claimed the land even though the diocese paid for it and a legal case developed.    The king decided in favour of the seller’s family but Stanislaus challenged the decision.    St. Stanislaus went to Piotr’s grave and commanded him to rise.    Piotr rose, three years after his death, testified in court and defended Stanislaus.   The diocese kept the land and Piotr returned to his grave.

King Bolesław II was known for his promiscuity, corruption, as well as cruel treatment of soldiers and their families.    These all led to his excommunication by St. Stanislaus in 1079.    For this, the bishop was accused of treason and soldiers were ordered to kill him but they refused.    The king attacked St. Stanislaus while he was celebrating Mass. Stanislaus ran but the king followed him and Stanislaus was martyred in the public square.    Outrage over the murder forced Bolesław to renounce the throne and go into exile in Hungary.   The remains of St. Stanislaus are interred at Wawel Cathedral in Krakow.

One thought on “Saint of the Day – 11 April – St Stanislaus”