Cesar was born at Cavaillon, France and little is known about his early life, with the exception that he was middle child – the seventh of thirteen children and raised as a pious child.lived both piously and virtuously.    At eighteen years old, he joined the French army,and took part in the king’s war against the Huguenots.      Back in his home town of Cavaillon, he took over the position of his late brother as canon of Salon, a position he wanted for its income and connections instead of its spiritual significance. One night while on his way to a masked ball, he passed a shrine where a small light was burning before an image of the Virgin Mary.   He was suddenly overwhelmed by the memory that a friend, Antoinette Reveillade, had prayed fervently for his salvation.   He realised that there was no way he could live a life offending God and then expect to be accepted in the end.   There, on the road, he had a complete conversion.   He returned to his studies, resumed his pious lifestyle and was soon ordained to the priesthood at the age of 38.

Upon ordination, Cesar immediately distinguished himself by his works of charity, serving all in need.    He was profoundly affected reading a biography of Saint Charles Borromeo and tried to take him as a model in all things, especially his devotion to catechesis.   He worked as a catechist in Aix-in-Provence, France, an area in turmoil following the Religious Wars.   Saint Francis de Sales called him “a star of the first magnitude in the firmament of Catechesis.”    He founded the Ursulines of Province and the Fathers of Christian Doctrine (Doctrinarians).   The Fathers were destroyed during the French Revolution but an Italian branch, the Doctrinarian Fathers continues today with houses in Italy, France and Brazil.   He further demonstrated great effectiveness and zeal in preaching.    He focused primarily on those who would receive the Word of God from no one else—those living in horrible conditions, living out of city in the countryside and those marginalised by society.    He further focused on catechesis of the family, instructing the parents alongside the children, something which had previously not been done.    The congregation was approved by Pope Clement VIII. A few years later, Cesar founded a companion congregation, the Daughters of the Christian Doctrine. 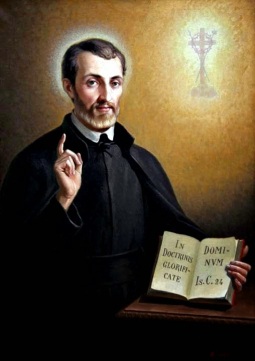 Blessed Cesar wrote five volumes on the Catechism, portions of which continue in use today.    His Instructions for the Family on the Four Parts of the Roman Catechism, was published 60 years after his death.    He died on Easter Sunday, 15 April 1607 in Avignon, Vaucluse, France of natural causes and his remains are interred in the church of Saint Mary in Monticelli in Rome, Italy.    Blessed Pope Paul VI at his Beatification:  “He learned in this way to seek and love sacrifice, for sacrifice configures one with Christ, Suffering and Victory.   To offer himself as a libation, to leave everything in God’s hand at the cost of the greatest renunciations, this seemed to have been the leitmotif, the perpetual aim of his efforts.   And when, at the end of his life, suffering and afflicted with blindness for 14 years, he was at last able to prepare for the supreme gift, he realised how useful asceticism has been to master the old Adam.   He was ready to meet the Lord.   His joy was perfect.”

He was Beatified on 27 April 1975 by Blessed Pope Paul VI who said at the ceremony:

“The work of Cesar de Bus continues to generate, after three centuries, our admiration. Here’s someone who got it right.    He recognised the needs of his time and he responded with equal generosity and efficiency.    Attracted by his vision and influence, other enthusiastic men were gradually gathered around him, learning how to approach the catechism and taking a lead from him.    Quickly they formed a religious family who, despite the vicissitudes of history, still flourishes today in various countries.    Now located in Cavaillon, France, the Fathers of Christian Doctrine know this day our special concern for them, our esteem and they receive our wishes and encouragement!    We are pleased to honour them now in the person of their founder.

And we wish the pastors and those responsible for catechetical use, who have followed Blessed Cesar’s example and writings, guiding their thinking and their work.    Blessed Caesar de Bus, you who left us the admirable example of a life given to God, who burned with a desire to communicate God’s life with your brothers, now intercede for us with the Lord, for the same Fire consumes us and the same charity urges us.   And you, dear brothers and sons, we entrust you to him and we bless you from my heart.”