Saint of the Day – 6 July – St Maria Goretti – Virgin and Martyr, known as “Saint Agnes of the 20th Century” (16 October 1890 at Corinaldo, Ancona, Italy – choked and stabbed to death during a rape attempt on 6 July 1902 at the age of 12.)   She was Canonised on 24 June 1950 by Pope Pius XII    The ceremony was attended by 250,000 including her mother, the only time a parent has witnessed her child’s canonization.   Patronages – against poverty, against the death of parents, of children, girls, martyrs, poor people, rape victims, young people in general, Children of Mary, diocese of Albano, Italy, Albano Laziale, Italy (proclaimed on 5 May 1952 by Pope Pius XII), Latina, Italy.   Attributes  – Fourteen lilies; farmer’s clothing; (occasionally) a knife. 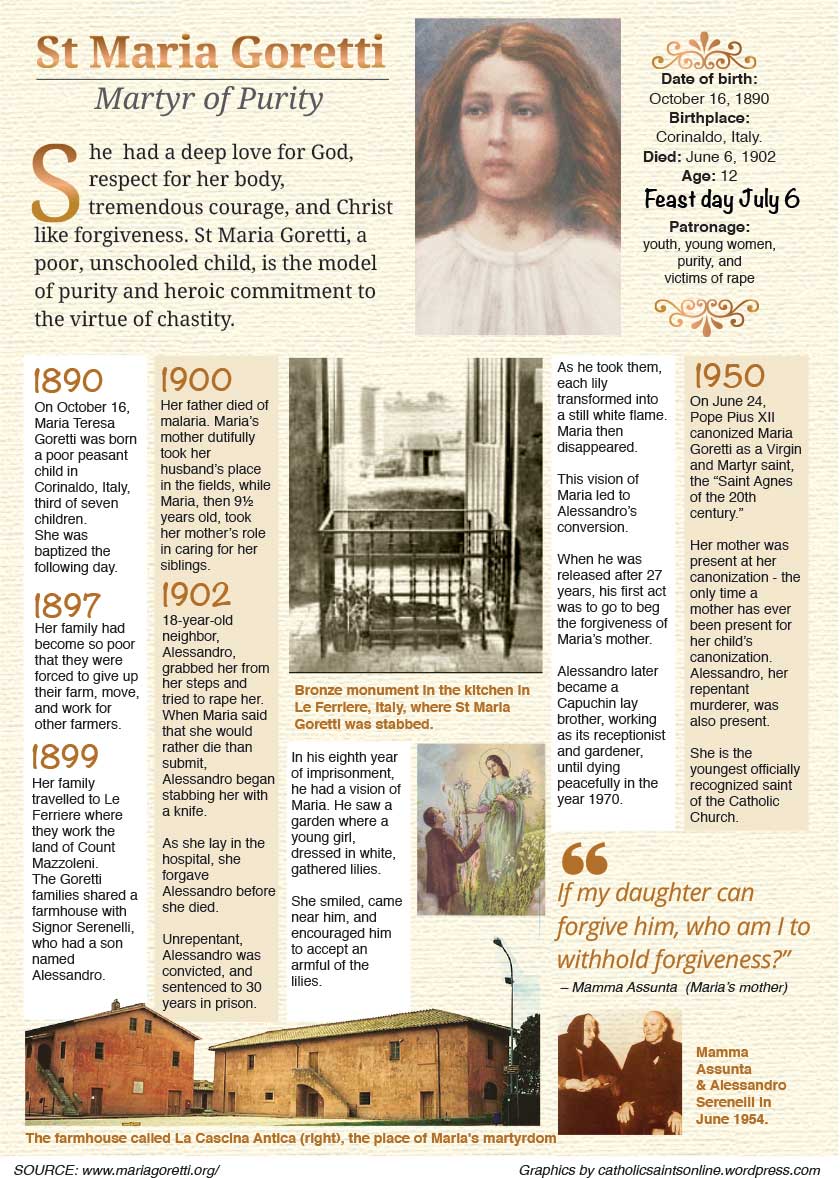 In 1900, two farm labourers relocated their destitute families to an old barn near Nettuno, Italy.   Luigi Goretti, his wife, Assunta and their six children moved in with Giovanni Serenelli and Alessandro, his teenaged son.   Soon after the move, Luigi died, leaving Assunta to carry on his work.   Maria, her oldest child, who was ten, assumed the household duties and cheerfully supported her mother.

At twelve Maria was already a beautiful young woman. Alessandro, then nineteen, twice made advances toward her.   She rebuffed him and kept his propositions secret because he had threatened to kill her.   On July 5, 1902, Maria sat atop the hovel’s stairs, mending Alessandro’s shirt.   He stormed past her, ordered her into a bedroom, grabbed her, and attempted to rape her.  “No! No! No!” Maria cried. “Don’t touch me, Alessandro! It’s a sin!”  She resisted him with all her strength.   Angered beyond control, he stabbed her fourteen times.   Maria survived a pain-filled twenty-four hours in the hospital. 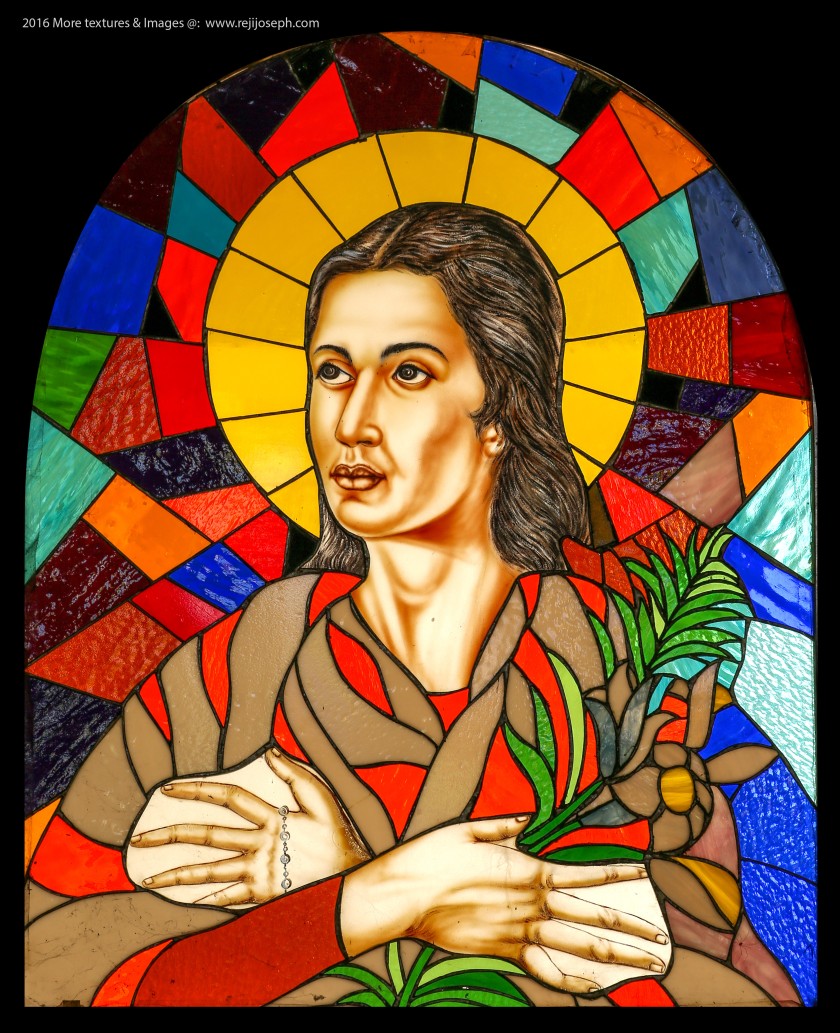 She showed more concern for where her mother would sleep in the hospital than for herself.   Before she died she forgave Alessandro and prayed for God to have mercy on him.
Alessandro was sentenced to thirty years’ hard labour and imprisoned at Noto, Sicily. One night in 1910 he dreamed that Maria handed him a bouquet of lilies and he began to feel remorse.   Soon after, Bishop Blandini of Noto visited him, explaining that Maria had forgiven him and that God would also forgive him.   The message struck home.   A few days later Alessandro sent the bishop this letter:

“I cannot tell you what comfort has come to my sorrowing soul through the conversation with your Excellency, for which I send my most heartfelt gratitude.

It is indeed true that in a moment of mental aberration I was led to commit a barbarous murder which the law has already punished. . . .I regret doubly the evil I have done because I realise that I have taken the life of a poor, innocent girl.   Up to the last moment she wanted to protect her honour, sacrificing herself rather than give in to my wishes.   This it was that drove me to so terrible and deplorable a deed.   Publicly, I detest the evil that I have done.   And I ask God’s forgiveness and that of the poor, desolate family for the great wrong I committed. I hope that I too, like so many others in this world, may obtain pardon.   May your prayers united to mine obtain for me the forgiveness of Him who governs all things, and the calm and the blessing of the poor departed one.” 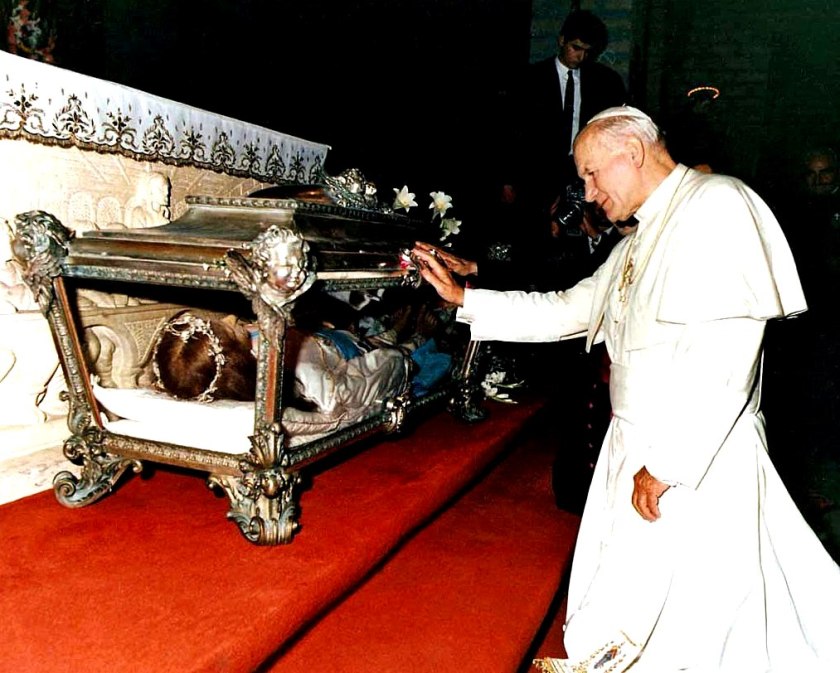 Alessandro was released from prison early for good behaviour.   He reformed his life and ultimately joined the Franciscan Third Order. Pope Pius XII canonized Maria Goretti in 1950.   Assunta, her mother, was present for the event, the first time a mother was present when her child was declared a saint.

Maria was beatified on April 27, 1947.   In attendance at the ceremony were both Assunta and Pope Pius XII.   On the evening of the ceremony in Saint Peter’s Basilica, the Pope walked over to and greeted Assunta.   She later reported, “When I saw the Pope coming, I prayed, ‘Madonna, please help me’, and I felt faint. He put his hand on my head and said, “Blessed mother, happy mother, mother of a Blessed!”  Afterwards, both could be seen with eyes wet with tears.

Three years later, on June 24, 1950, Pius XII canonised Maria as a saint, the “Saint Agnes of the 20th century.”   Assunta was again present at the ceremony, along with her four remaining sons and daughters. Alessandro was also present.

Owing to the huge crowd present, the ceremonies associated with the canonisation were held outside Saint Peter’s Basilica, in the Piazza San Pietro.   Pius XII spoke, not as before in Latin, but in Italian. “We order and declare, that the blessed Maria Goretti can be venerated as a Saint and we introduce her into the Canon of Saints”.   Some 500,000 people, among them a majority of youth, had come from around the world. Pius asked them: “Young people, pleasure of the eyes of Jesus, are you determined to resist any attack on your chastity with the help of grace of God?”   A resounding “yes” was the answer.

Maria’s three brothers would claim that she intervened miraculously in their lives. Angelo heard her voice telling him to emigrate to America.   Alessandro was reportedly miraculously given a sum of money to finance his own emigration to join Angelo. Sandrino died in the United States in 1917 and Angelo died in Italy when he returned there in 1964.   Mariano said he heard her voice telling him to stay in his trench when the rest of his unit charged the Germans in World War I.   He, the only survivor of that charge, lived until 1975 and had a large family.

Maria’s body is kept in the crypt of the Basilica of Nostra Signora delle Grazie e Santa Maria Goretti in Nettuno, south of Rome. It has been often reported that it is incorrupt but this is not the case.   It is kept inside a statue which is lying down beneath the altar, which has been mistakenly believed by some to be its entirety. 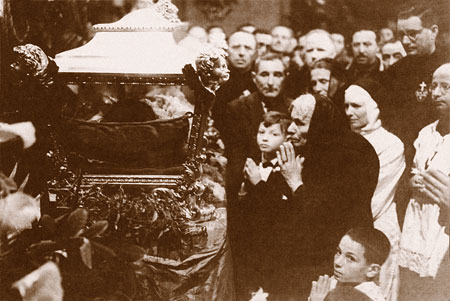 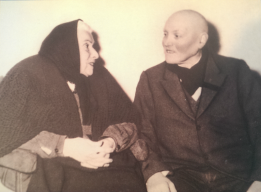 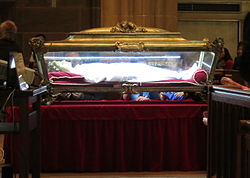